On day 2 we talked about the story of the pose, today we’ll get more specific.

Often the core of the story can be found in how the shoulders and the ribcage mass relate to the pelvis. However you draw, it’s going to be useful to ensure you get the angles of the shoulder line, spine or torso centre line, and pelvis line.

You may well be doing this already, especially if you are using our beginner series approach with the stickman. Now we need to go deeper – the point of day 3 is to push these curves and angles.

People very very often reduce these curves and angles, like this. Lets take a look at some examples from an artist that we are helping with tuition. 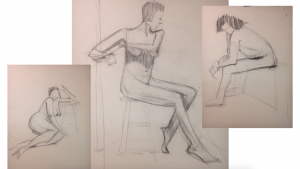 His name’s Kasem. He’s a really good learner and has a great eye for drawing, but didn’t yet know how to tackle figures. At first he was drawing like this – good but he was reducing the angles in the pose, making them less dynamic. A lot of people do that.

So the first thing I asked him to do was just focus on torso and to go for it with those angles. And he started to make improvements so the first attempt he did this. It was an improvement, but he was still underdoing the angles in the pose.

So I asked him to do it again and repeat it, and he did. And things really started to come together more. He started drawing the torso like this doing justice to those angles.

And from there we could move to including head arms and so on. 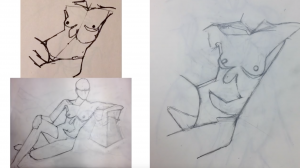 Look for some curvature of the torso centre line or the spine line – find it and bring it out!

The lesson is that we are wired to reduce angles and curves and make them more conservative, but if we are going to go either way, go the other way, the more dynamic way with the deeper angles. So when doing your practice today, do justice to the angles it creates!

The Croquis Cafe practice is here.