I love the analogy of drawing to story-telling. Lets think of drawing a figure like making a movie about a true story.

It needs a coherent plot. That’s the structure of your drawing – the proportions and the volumes. These are the things that help you understand what’s happening.

The story needs emotional threads that build throughout, that’s the gesture. But instead of psychological feelings, we are talking about visual sensations. These are the things that make your eyes feel something. 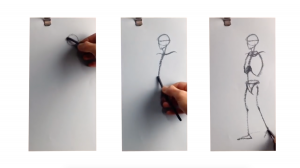 You need to filter out anything that doesn’t help the story, and really emphasise the things that do matter. In a quick pose, you need to do some really extreme editing. As an artist, rather than seeing more, you’ll need to see less. 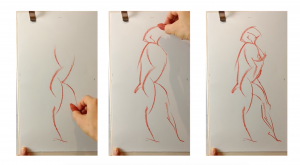 So what’s the story of this pose? What stands out? There isn’t a right or wrong answer – everyone will find different things important. For me, this curve feels like the obvious answer. And his leg is an important part of that. Let’s not reduce that curve. Notice how his lower leg is twisted further, emphasising that curve? And then his foot even more? Don’t lose that!

And in this pose, there’s this curve and this sharp fold is important. So let’s tell this story. Yes there’s all sorts of little bumps and stuff, but before we worry about any of that, let’s make sure we capture this curve, and this sharp fold. So when I draw it, I want to make sure that is there. It makes the drawing process easier because there’s all these other details I’m not worried about. 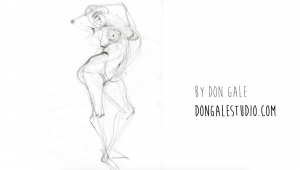 Here Don Gale shows the big curve of the torso, but really emphasises this big fold here. I think this drawing really distills things down to what he cares about in the pose. Drawing like this isn’t about adding to the pose, it’s about removing from the pose that things that you don’t care about and that don’t make your eyes feel something.

For now, when drawing a figure, try considering for a moment – what is the story of this pose?

Enjoy your Croquis Cafe practice session and you can find the Day 3 tutorial here.

Day 5: Torso / spine line - distance to each side