How to Draw NECKS – 5 simple lines

This is the start of a new series where we zoom in to different parts of the body to learn what to look for in them and what the most important lines and shapes are for drawing. I mean only the lines that are so important, you would be interested in them even if it was just a quick drawing of the whole figure.

This is not an anatomy series. We aren’t going to strip back the skin and look underneath much and we aren’t going to learn Latin names. We’re also not looking at how to do a highly rendered and polished drawing of each body part. There are lines and shapes that are really useful to look for in each area of the body when observing it whether doing a detailed drawing or a quick drawing of the whole figure.

The neck is a great place to start because it’s absolutely essential and gets overlooked. I used to have a ton of trouble getting the head right relative to the torso without realising the obvious thing, which is that I was messing up the neck.

So a really common thing is to think of the head as a sort of cylinder that sits on the torso and then the head sits on top of that. So often the neck becomes two lines that stick out from the torso right under the head. Those two lines sticking straight out aren’t the lines we need.

Little bit about the insides

Ok so I said this isn’t really an anatomy video, but we do need to understand a really important thing about the structure inside the neck. The bones in the neck are part of your spine, which as you know runs up the back of your body. So the attachment starts towards the back of the neck – you can even feel a bone at the back of the base of the neck.

That means your neck is a continuation of that line, not a separate structure that sits on top of it. Seeing the neck as a continuation of the spine line is a really useful thing to keep in mind when you’re drawing it, especially when you’re drawing it from the side or from the back. This bit of your spine is really flexible, and it can bend really sharply, but it is still part of the spine. 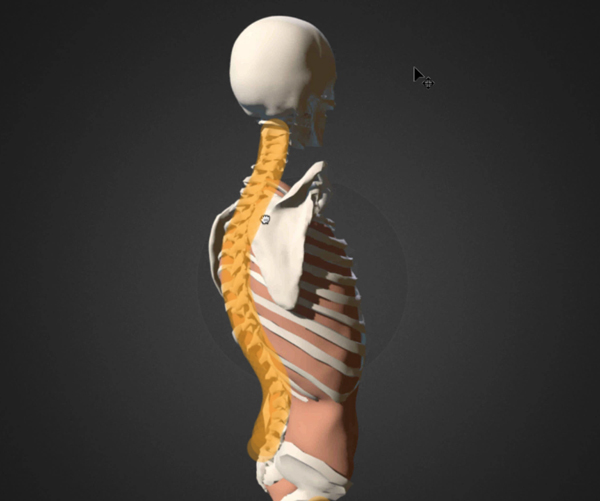 It also means that when your neck rotates, it rotates around those bones near the back, not from the centre of the neck. Try putting your fingers against the back of your neck and rotating your head. They don’t move that much. But try the same against the front of your neck. Lots of movement.

The base of the neck

The other thing to note is that relative to the torso, the base of the neck is tilted forward a bit. The back of it is a bit higher than the front. Imagine the circle created by the collar of a well fitting t-shirt. It’s not horizontal, it’s tilted. That’s something that is useful to see – you can start noticing that line on people when you’re walking around.

So the lines we need to look for. We talked about the continuation of the spine line, that’s really useful especially when viewing from the side or back. We talked about that line that a tshirt collar would make around the base – you don’t need to make a big deal of that in the drawing, but it’s often useful just to see it.

The V shape created by these muscles are some of the most useful lines on the neck. Getting the angles right on these is so helpful to getting the head in the right place. Notice how this side is actually going straight up and the other is going off at a sharp angle?

Then there are various useful lines that aren’t necessarily part of the neck, but are crucial to getting it right. For poses from front angles, there are the collarbones. They are a great way to get the relationship between neck and torso right – especially using that point where they meet in the middle, which is where that V comes down to.

Then there’s these muscles at the back that create these diagonals – you may know them as the trapezius muscles or traps. These get forgotten about all the time, because often the preconception is that the lines from the shoulders are horizontal and then go vertical at the neck. For poses from the back, these together with the spine line are a really helpful combo.

So we have the collarbones and the V of the muscles on the front and the traps and spine line on the back to help get the attachment to the torso right and to get the twist and angle of the neck itself right, then the jawline and ear to position to head right. Seeing that tshirt collar line can sometimes be helpful to get a feel for the base of the neck too.

Seeing points of intersection and overlap

As well as the angle and length of these lines, we really want to understand the relationship between them. Which one is on top of the other? This line runs up to near the ear, but we don’t see it all because the jaw is hiding it. The line of the jaw is on top and we can make that clear in the drawing by showing that overlap. Where does this line disappear into that jawline? It’s right on the edge of the chin. We’re going to pay attention to those points where a line disappears behind another. From this angle, the lines of the trapezius are closest to us, they’re on top of everything else. So where does line of the X disappear behind that trapezius line?

One reason that this is useful is because we have preconceptions, usually incorrect ones, about where everything should be. The neck is above the torso and the jaw and chin are above the neck.

The tones you see are going to vary based on the pose and lighting and individual model. One thing we are often looking for is to explain to the viewer’s eye that the chin and jaw are sticking out beyond the neck. There is often some depth there that we need to explain. Often you’ll see shade under the jaw – we want to capture that shadow shape. It doesn’t need to be detailed, it can be simple, but it needs to explain the depth.

We got these photos from a 360 degree Croquis Cafe video. That’s where the model holds a pose and is rotated 360 degrees so that you can pause the video at any point and see the same pose from different angles. That way, we could understand how the lines of the neck changed based on the angle we are looking at them from.

If you’ve seen our other videos, you’ll know we are always talking about not zooming into one part of the figure early in the drawing. Start with big simple marks that capture a big chunk of whatever you are drawing, and don’t move into detail until the gesture and the structure are established. In this series, we are zooming in to different parts of the figure, but you still want to start by seeing the big picture before worrying about zooming in to different areas.

As always guys, none of this is easy. I wrote ‘simple lines’ in the title of the video because they are simple, but I hope that wasn’t misleading – simple doesn’t mean easy in drawing. If you try drawing with these lines and find it hard, it’s because all of figure drawing is difficult and takes time to get used to. As you keep practising and practising, it makes more and more sense. In an upcoming video, I’ve got some beginners drawing using these techniques, so we’ll be able to see the real struggles of learning and how to get through them, so watch out for that.

If you haven’t already, sign up to our newsletter and get the free ‘Life Drawing Success’ guide below – it’s all about the one mistake that caused most of my other mistakes.