Why is this drawing so hard? Understanding pose difficulty (video)

Sometimes you’ll do a drawing and feel like you somehow got worse at drawing overnight. You might be having one of those bad drawing days – like the one I have had today, which is just really annoying and makes me want to throw everything in the bin and give up. A bad drawing might even make you feel like you have no consistency.

But there are many things that can affect how your drawings come out, and one overlooked factor is that some poses are much more difficult to draw than others.

In most life drawing classes, you’ll face various pose difficulties almost at random during the session. That’s not a bad thing, but understanding the varying difficulties can be helpful.

Using photo references can be the opposite extreme, because you are often choosing the photos, you may subconsciously avoid certain trickier poses or figures and end up not getting the range of poses you need to round out your skills and to challenge you.

Most of the photos we are using in this video come from our favourite photo reference resource, Croquis Cafe. Check out their channel for videos to draw models posing in real time, or their website for still photos.

The following factors determine how tricky a pose is to draw:

Lets get the obvious one out of the way first. This is a big one. The difficulty goes up depending on the number of foreshortened elements and how they are foreshortened.

Manageable foreshortening, on the forearm

As we have discussed before, your brain has various preconceptions about how the human figure looks which mess with your eye’s observations when drawing. One thing your mind wants to do is straighten out the pose – draw it as if you are viewing it straight on, and ‘undo’ the effect of foreshortening. 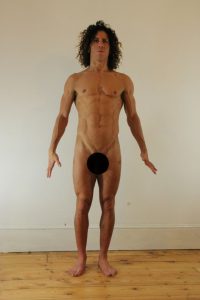 Sometimes, extreme foreshortening is easier than mild foreshortening, because it’s so far from your mind’s preconceptions that your mind doesn’t even try to distort it.

Some poses have one obvious plane along which the figure is foreshortened. So you need time to figure that out, but then you’re ok. In some poses different body parts are foreshortened in different ways – so it multiplies the headaches.

This foreshortening is tricky, but mostly it’s along the same plane so once figured out, you’re ok

Foreshortening becomes a benefit though once you get the hang of it. It can add drama, depth and even energy where there isn’t any.

This is our experience of foreshortening – yours may differ.

If the pose is covered up somehow, or facing away from you, you may not be able to see visible landmarks that you like to use as anchor points in your drawing – like those we used in our beginner video series.

Poses like this one below are made a little easier because you can see the visible landmarks we often use like the belly button, solar plexus, collarbones, pelvic bone tips and so on. 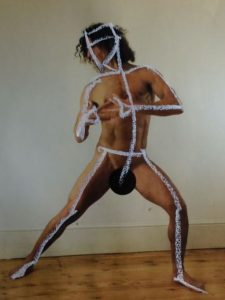 When the landmarks are clear, you can use them for the structure of the drawing

But, if the pose is all back, or hunched over with limbs covering the pelvis and ribcage, then we don’t have our usual landmarks.

You can still though create anchor points of your own using alignments via horizontal and vertical lines.

Movement helps us create lively and interesting drawings – check out the first lesson in our beginner course to learn more on that. 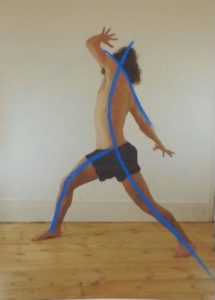 Movement in the pose helps make the drawing process easier

When there’s no movement, no flow or energy in the pose, it’s hard to make it feel alive. 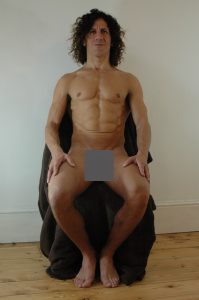 A sitting straight pose can be harder to draw. There’s not as much movement to create flow in your lines.

Sometimes, a limb or the neck or torso is dissected by an object – another body part or something in the environment. We need to make it into a solid and connected whole, even though we can only observe the ends of it.

Light and dark should help describe the form for you. The shapes of the shadow and the light make clear where the planes of the figure are and where they are pointing. If it’s all lit up, it’s hard to differentiate and understand the form, and harder to capture it in terms of light and dark on the page. Overlapping partial shade resulting from multiple light sources from different angles creates confusion. 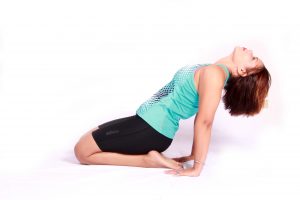 Lit from one angle

We recommend drawing hair as a shape – forget that it is made up of strands and see it as a 3D volume (except for the stray strands that fall away from the mass). We can observe the mass’ planes, and shade those planes to create volume. 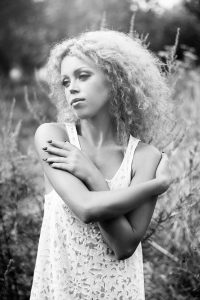 Challenge yourself to learn to draw tricky hair

When the hair is very frizzy, it is difficult to see planes, or even a usable shape. The hair is going every which way.

This last one relates to photos only – and it’s about distortion. I’m not photography expert, but photos do sometimes either stretch out some parts or compress parts. A head may be bigger than it should be, legs longer or shorter.

Why is this relevant?

At first I was going to suggest a scoring system for poses, where you could give difficulty points depending on how many difficulty factors a pose presents. A foreshortened pose lit from multiple angles would get more points for example.

However, I’ve been realising that being overly analytical about drawing can hurt your drawings – at some point, even for someone that loves to over analyse and quantify everything like me. Drawing is time to let go, and let instincts and feeling take over. So there’s no need to overthink this, but just having a general awareness of these factors is useful for the following reasons:

If you have been avoiding certain poses – foreshortened poses or certain types of figure for example, seek them out and challenge yourself.

When we are learning a new technique or a new material, it’s already quite difficult because it’s new. So lets not immediately add the challenge of applying it to difficult poses. Lets build up to that, and start with easy poses. As we become more comfortable with the technique or material, we can start to increase the level of difficulty in the poses.

Go for easier poses when taking on other challenges, like a new material or technique

Another way to use this idea is for understanding why you may have done a “bad drawing” – a drawing that looks like it’s on a level that you thought you had moved beyond. Sometimes that’s just you having a bad drawing moment – you’re a human being.

But sometimes it’s not you, it’s the difficulty of the pose. So now you know you need to practise tackling whatever it was that made this pose difficult, so that your drawings are consistent regardless of the pose.

I really hope you found this idea useful. We’re also on Youtube, Instagram and Facebook, we have a podcast called the Love Drawing podcast and a newsletter (sign up below) – all designed to bring you regular life drawing support. Thanks so much for watching!

How to Improve Massively At Drawing Across 12 Months

12 Ways CONFIDENCE will transform your artwork