Today we’re outside looking at how to train your eye to better see perspective while you’re walking in the street. It’s a great way to get in extra practice when you’re not drawing. There is a video and an article version of this tutorial below.

Perspective is something that I used to find quite intimidating. I think it’s helpful to not just understand the principles, but also practise seeing it a lot and thinking about it regularly. You get more and more used to it, and that helps build an intuitive sense of it.

Even if you’re not interested in landscapes or urban sketching, this way of practising is indirectly useful for your life drawing too. We can’t just sit and draw 24/7, though that would be pretty cool.

You can’t really make marks on paper while out walking, but you can observe, and training your eye to do that better is a huge part of learning to draw. So what can we learn about perspective on this street?

So as Father Ted explained to Dougal, things that are further away look smaller, we all know that.

So that means that this side of the house looks smaller than this side, and so these lines connecting them get narrower as they go further away. 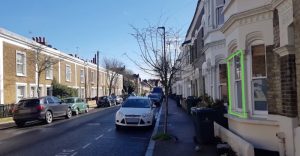 The gap between two converging lines gets narrower and narrower until the gaps disappear. The point where the gap disappears is called the vanishing point. 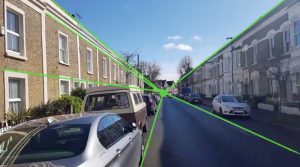 We humans like to make the world into straight, often parallel lines, so urban areas become like a grid of these straight lines, and that is quite useful for helping us to get a visual understanding of perspective. Here we have 2 point perspective.

These lines converge to this point and these are pointing another way, so they converge to another point over here. 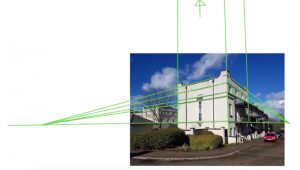 3 point perspective would be when you also have a third point that lines converge to. In this case, it would be the vertical lines and the vanishing point would be really far up in the sky. It’s often easier to see for something that is above you or high up.

Now the truth is quite complicated. The truth is that even for simple box shapes like these buildings, 3-point perspective always applies because they have 3 dimensions.

What people describe as single point perspective is just when the other two vanishing points are so far away that the converging of the lines is barely visible, the lines are almost parallel, so they’re a bit irrelevant and it’s just practical to see the convergence to one point. 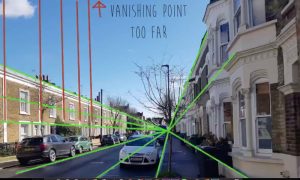 Everything has its own vanishing points

Another complicated truth is that not everything has to converge to the same vanishing points. We can learn about this at the dining table while having breakfast. Each object will have its own vanishing points. When they’re aligned with each other, they happen to all converge nicely to the same points. But if they weren’t aligned, they’d have different ones. 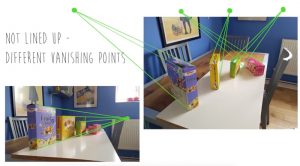 Anyway, we’re going to keep things simple, and just start to notice and see these lines, and we can look for when one vanishing point is relevant, when two are and the rarer cases where 3 are, and also we can start to see if things have the same vanishing points because they line up with each other or if they have different vanishing points.

Then you can go out to the park, and try to see how these same rules apply to organic shapes, even though it’s harder to see clearly because they don’t have these nice straight lines. 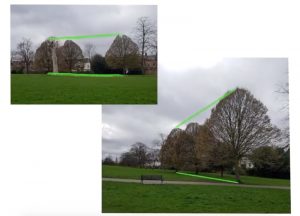 You can imagine the straight lines around each tree or around a hedge to help make sense of what you’re seeing.

See how narrow things get

Here’s something interesting to look out for too. All the buildings on this street are the same size – this is a classic London street of terraced houses. If we draw this house down here, we are likely to make it bigger because it’s a house, not realising how narrow it’s become. If you measure the width from our point of view though, the width of the far away ones is absolutely tiny. How can we make sense of this? 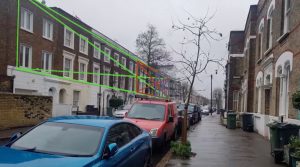 This is what’s happening on the street. This is the mid-point for this row of houses. Draw the cross, and when you’re looking straight on at it, the lines will cross over in the middle. When you look at it from an angle and perspective comes into play more, the lines will narrow as they converge to the vanishing point, and the middle of the street is still where the lines cross.

And if you wanted to see the middle of this section of houses, it would be another cross here. You can see that things get very narrow quickly down this end. The last house is just a sliver!

Using this for life drawing

We don’t think you really need to know or think about these perspective principles too much when doing life drawing. So if none of this makes sense, it doesn’t really matter which is always nice! These aren’t architectural drawings and there are other ways to observe and make the drawing work without thinking about vanishing points and all that.

But I do think that doing this while out and about helps you get more practice observing and understanding perspective so that you get a better intuitive sense of it. So then, even if you’re not consciously thinking about, your eyes see it better. For example, it’s really common when things are foreshortened to not believe how short things are becoming and elongate them. But if you’ve been observing how narrow things get so many times, it’ll help to break down that bad habit.

Observing the world with art in mind

Over the next few months, I’m planning on putting out a few videos and articles in a little series like this. It’s good for your artwork, but I think also it’s cool because the visual world around you starts to open up in new ways when you look at it with an artist’s eye. So let me know if you do want more like this. I also wanted to make one last point about this idea of observing the world around you.

Our eyes take in tons of information all the time. Infinite gradations of value, of hues and so on. We can’t possibly process it all properly, so instead we categorise things to keep it organised and simple. Rather than a complex array of light rays creating myriad of levels of value and so on, we just see ‘red car’. That helps keep us sane. It would probably be amazing to see the world without knowing what any of it is and having no words or concepts to interpret it all. It would just be this intense crazy mess of visual data. Sometimes I try to do it but I can’t at all, the categories are just too ingrained.

But it’s a good thing because it would be too overwhelming. In order to be able to draw this madness, you want something in the middle. You don’t want to categorise things down into just ‘red car’ – because then all you can draw is a symbol of a red car. You don’t want to overwhelm yourself with all the millions of details you see either. So instead, find that middle ground where you see what’s truly there, not the symbol, but you filter it down and simplify it to the most important characteristics. I think seeing some lines of perspective when you’re walking on the street is a nice place to start.