The most important colour to make your art BEAUTIFUL

The lord of the colors. One color to rule them all and in the darkness, bind them. Have you ever wondered what is it?

When you grab that color picker thing in Procreate on the iPad and scroll through the hues you see random colours. As you move towards the left of the box for any color in this color selection interface, you’ll see the color de-saturated, less vivid and less pure. 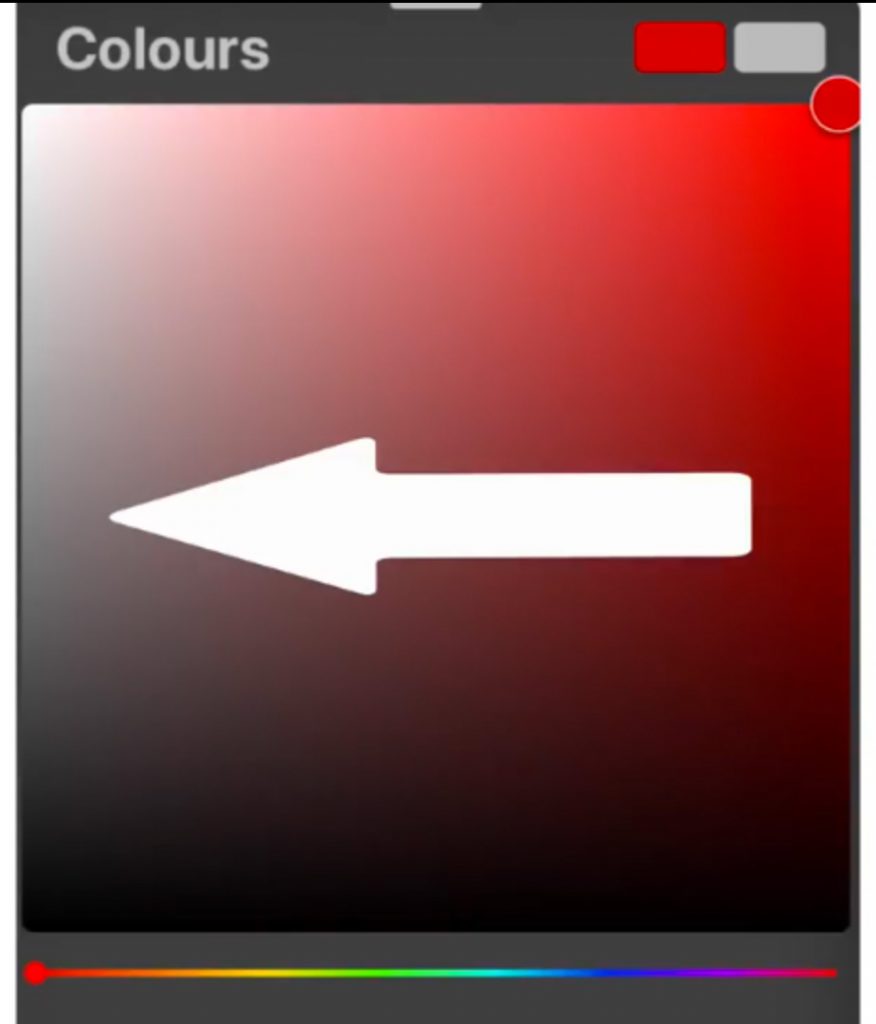 So on the left side, on the far left, it’s always the same. It’s just the greys. So when you randomly pick a colour, even on that super colourful painting, the interesting thing is that more than half the time, the colours are on the left half, they’re closer to the grey than to the pure colour. 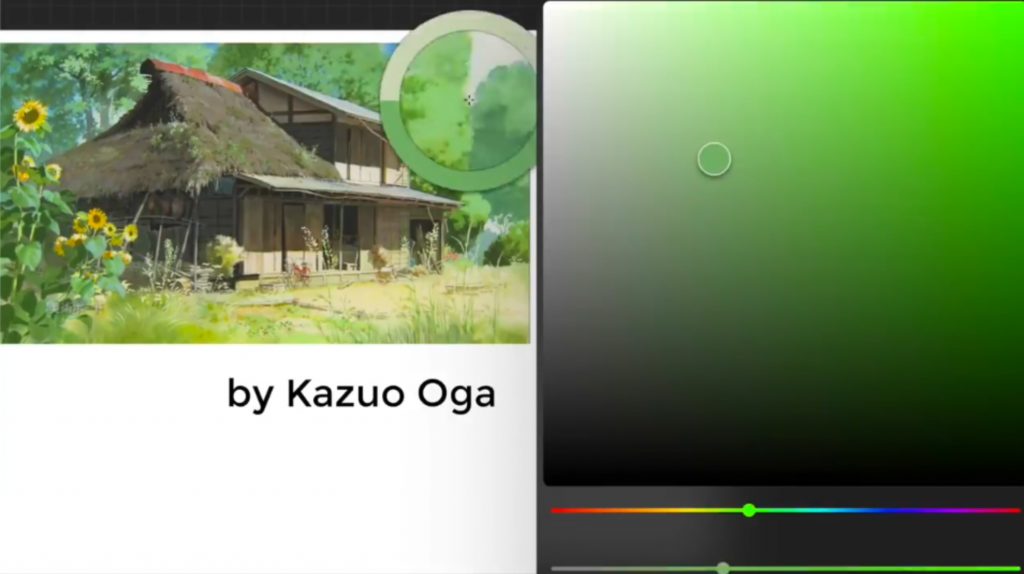 So then you look at those photos from bright sunny days with blue skies, green fields, loads of colour, loads of light. Loads of the colours when you go into it are actually closer to the grey side than the full saturation side. Then you can also grab some human figures and notice how much the colours skew towards grey, even in their skin tones. 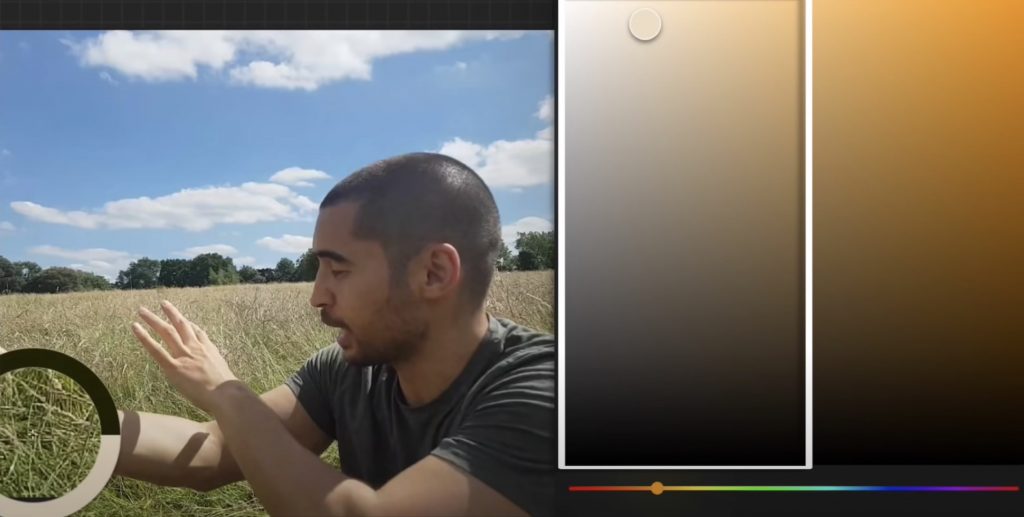 And here are the three amazing things about the colour grey.

So here’s a colour wheel and there’s actually various colour wheels out there, which helps you understand different things about colour. 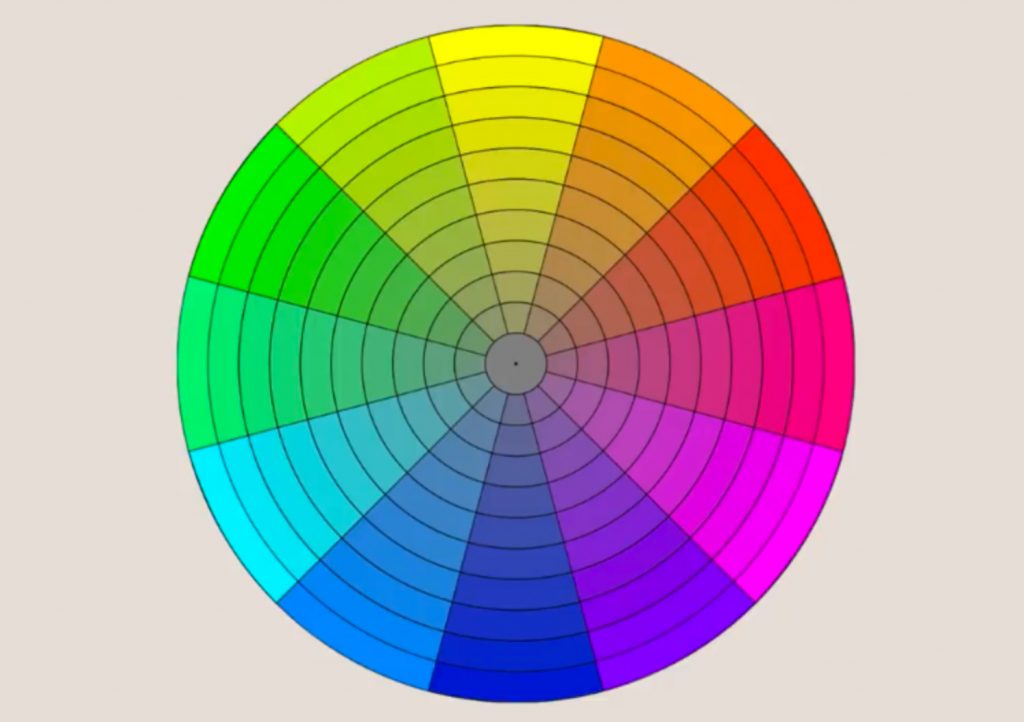 Notice in the middle, it’s gray. So gray is a color that all the other colors can touch on this wheel because when you reduce saturation, they all move towards the gray. So if you wanna go from blue to yellow, you pass through gray.

Check this out. You see this really strong orangy-yellow paper? So here I’m gonna change the light to blue and look at what happens. It doesn’t stay the same color. It doesn’t turn blue either. It becomes more gray, much more gray. 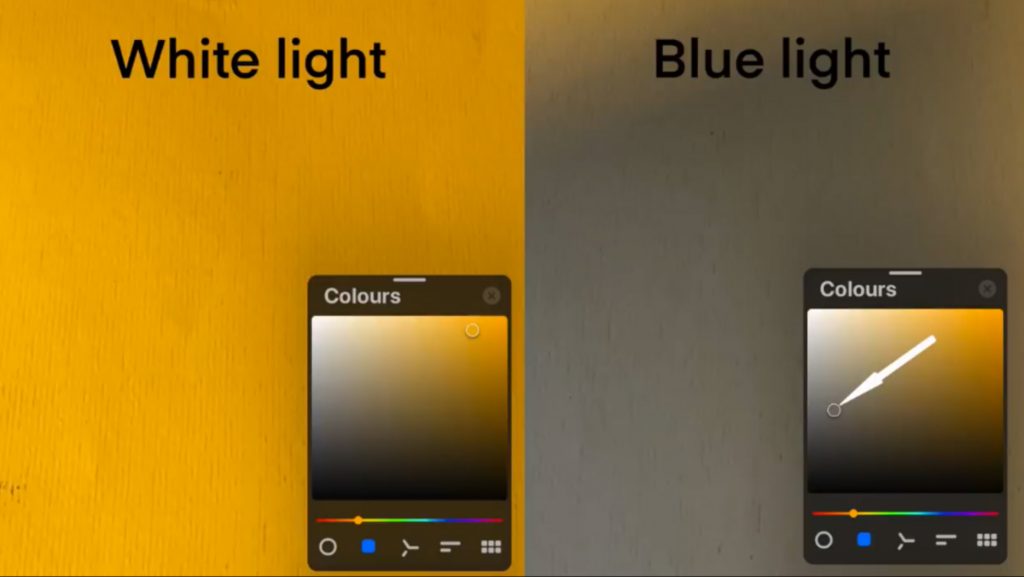 Does that mean that when you mix colours, they become grey? Not quite. I am saying that grey is amazing for various reasons but I’m not saying that anytime colours mix, then they shift towards grey.

The blue light shifted the yellow-orangy paper towards grey because they’re opposed on the colour wheel. So if you look at this paper, it’s a greyish-blue. It’s really grey with some blue in it. And when I hit it with that blue light, the blue becomes more vivid, more saturated: 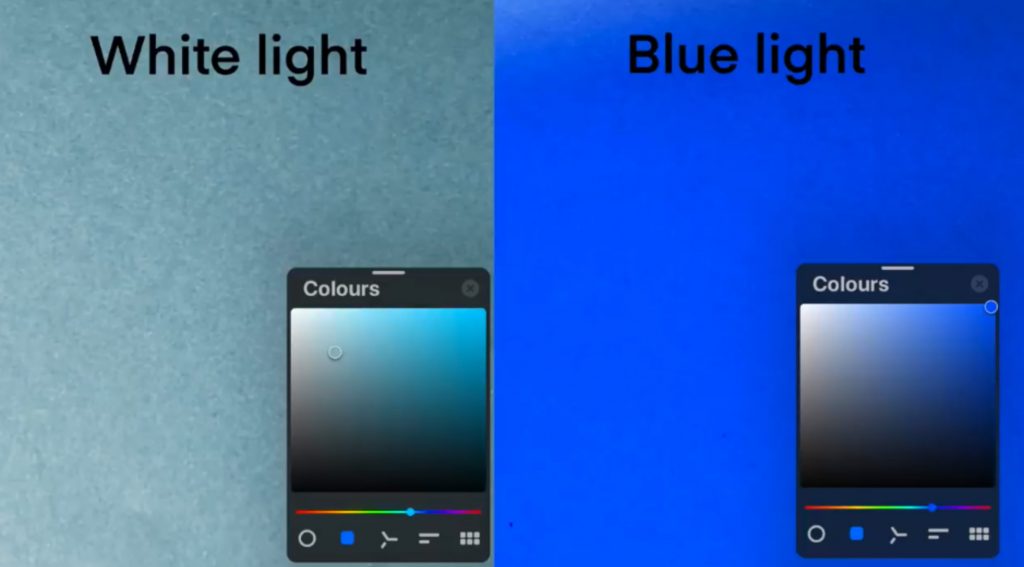 The colour is enhanced by the light. So that’s also one reason why you might find really saturated shadows on figures because there’s gonna be a lot of warmly coloured light bouncing around in those shadows.

So it’s a myth to think that shadows are always de-saturated in grey ’cause it depends on the light bouncing around in them.

So I think grey is sometimes misunderstood. It’s not boring, it’s not necessarily the colour of the shadows.

Check this out too. 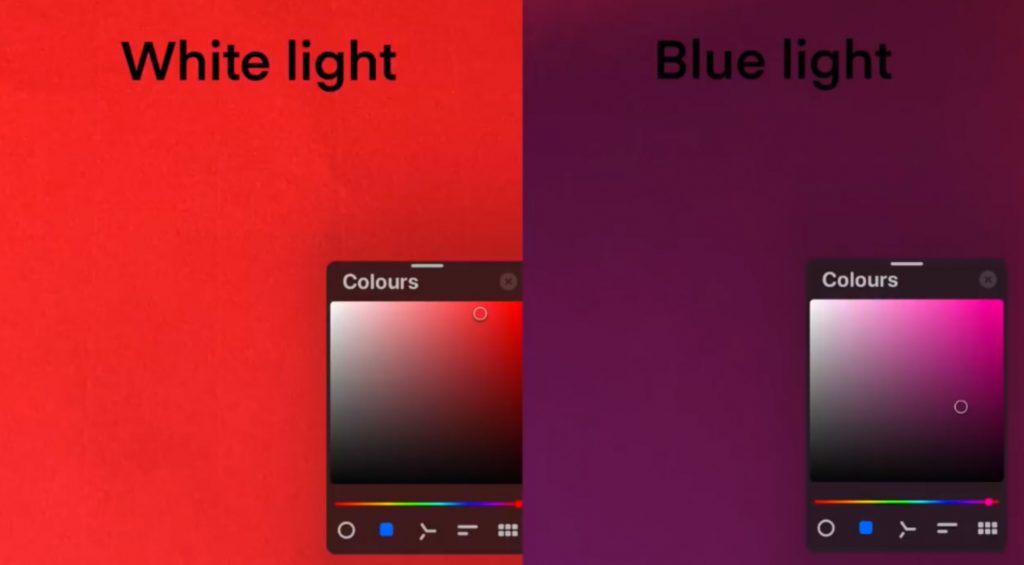 This red paper, when I hit it with that same blue light, it doesn’t just become grey, because blue and red aren’t opposed to each other on the colour wheel. So the blue just shifts the red across the wheel toward purple a little bit.

Now, another cool thing though about grey is because it’s in the middle of the colour wheel, grey surfaces seem to shift more easily towards the colour of the light that’s landing on it. So like that street scene, we saw that the warm sunlight made the street a warm orange-grey and then the blue sky made the shadow areas a sort of bluish-grey. 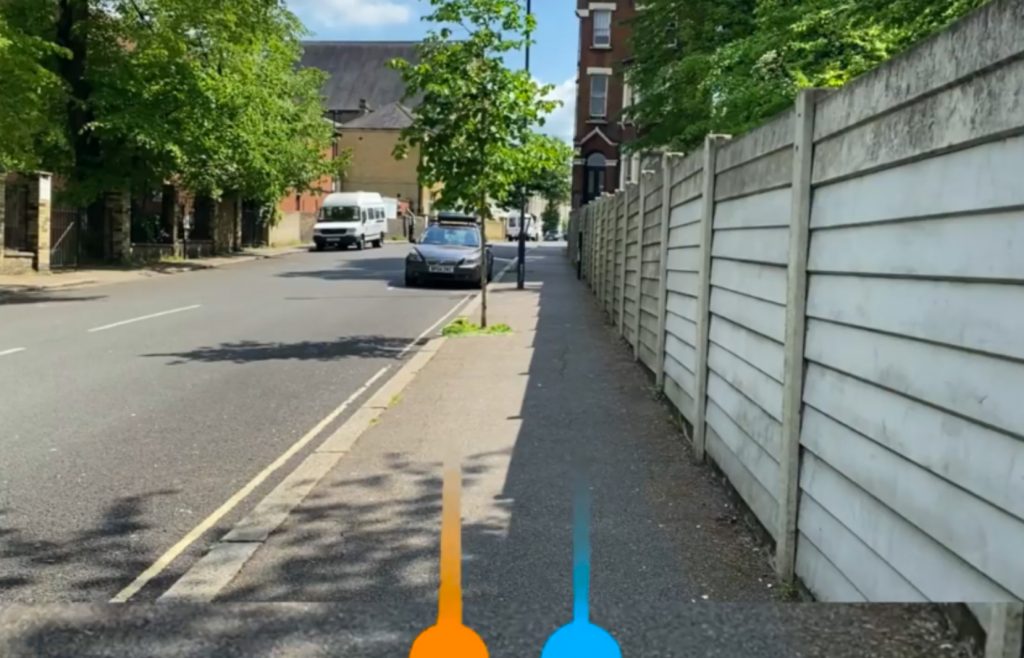 So it kind of seemed quite easy to shift the colour towards orange or towards blue and I think that’s because it started out in the middle, de-saturated. 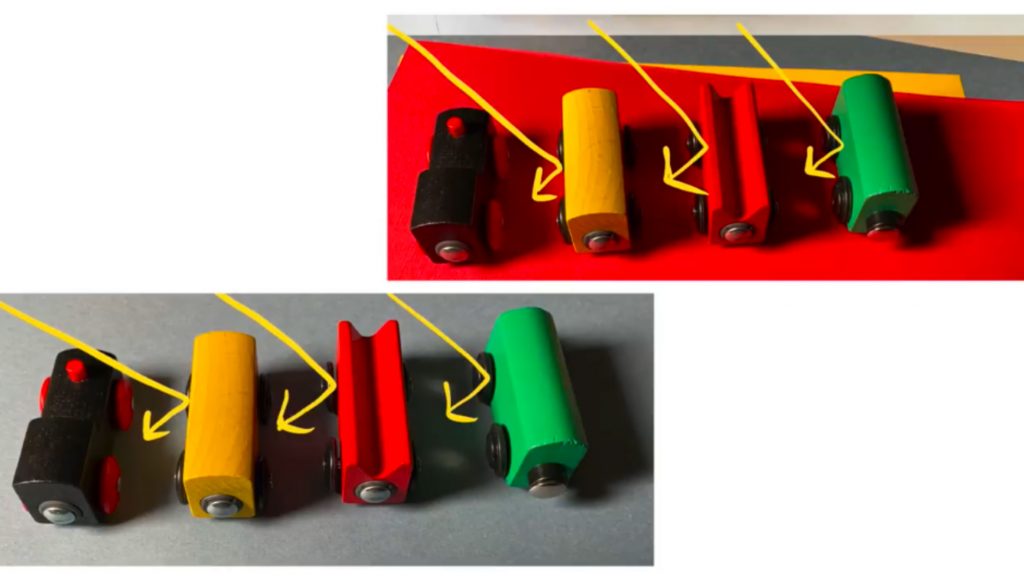 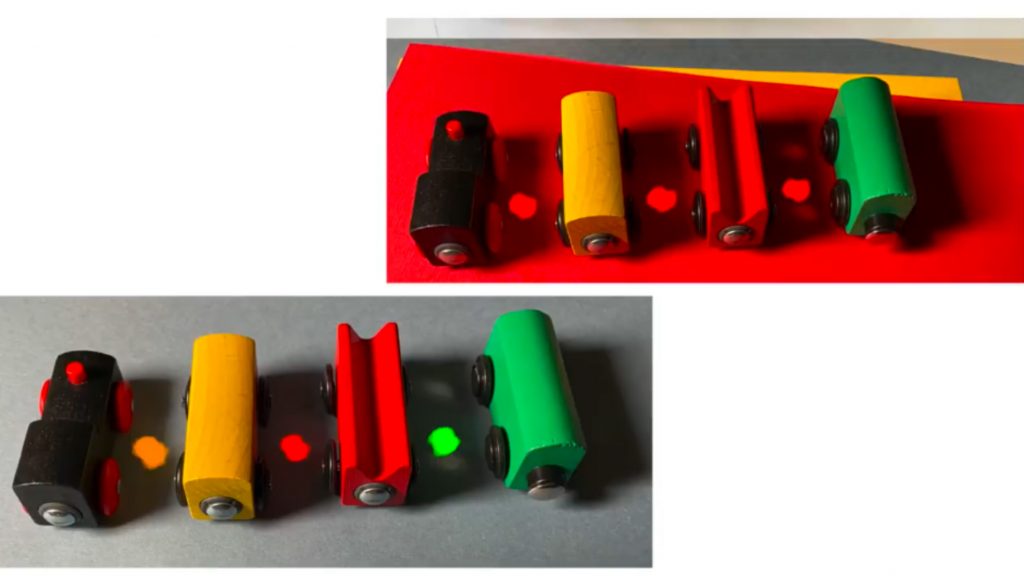 Jared Cullum, a really good artist, teacher, and he’s very passionate about colour. I found out some of his tips about colour and the role of grey in paintings. 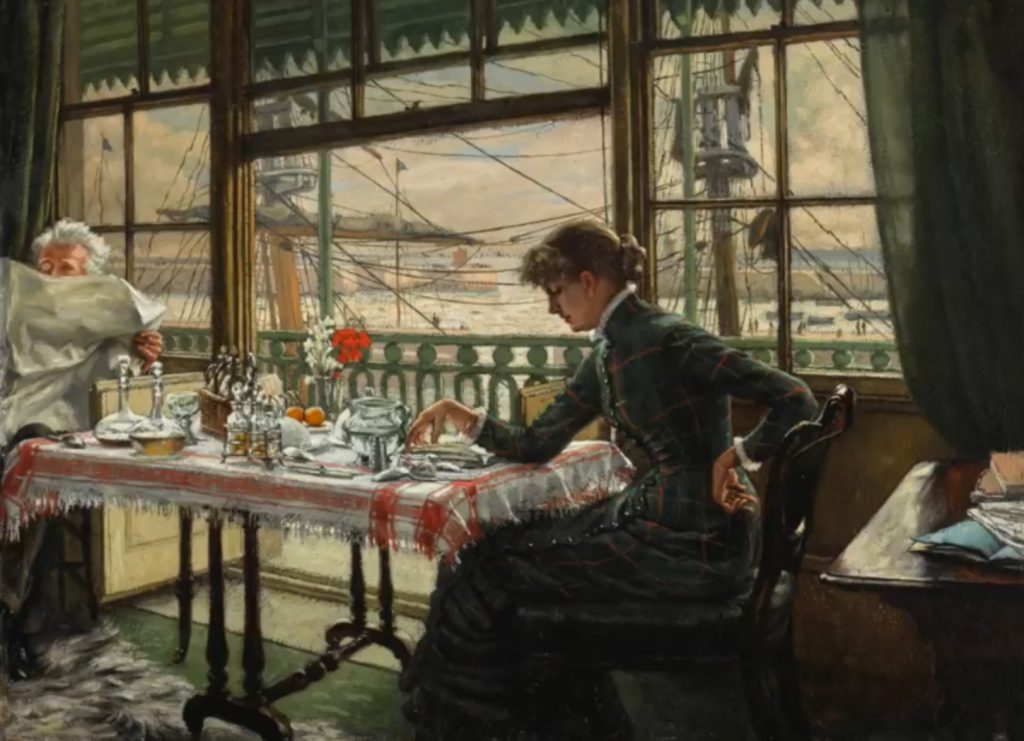 Jared says, everything’s kind of dull grey, green and then look at this red flower. And the tablecloth even. You have this high saturation.

So what you end up doing when you have a lot of saturation, is it’s kind of like if you’ve got these bright greens and bright stuff happening everywhere all over this image, it’s kinda like a boxer with their arms fully extended, just sort of like swapping at the person and it just doesn’t have the effect.

And maybe they’re really strong and it can annoy the person but you’re not using the tool of punching like a boxer who ideally would want to. I don’t know anything about boxing, but I imagine one would want to use jabs in a sense or use some kind of lighter punch to control the person and then really knock ’em out with a strong punch.

So by using all that greenish gray, Tissot set up the red to have a bigger impact.

Here’s another great painting by John Singer Sargent. This painting is almost all grey but it still reads beautifully. Even in this grey image, you’re still getting tons of variations from warm transitioning into cool, warm where light is bouncing back up. 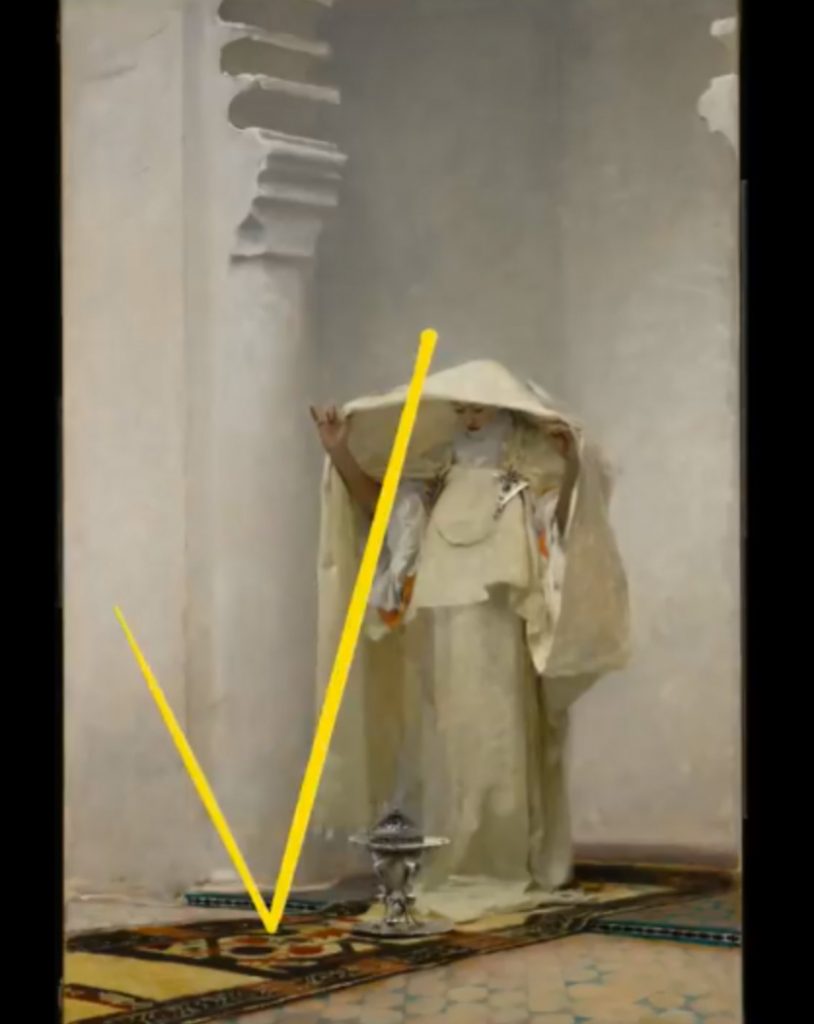 You have all these warms inside the hood here. And then he has this brighter rug and her warm here, it draws your focus in.

So we’ve learned that as colours de-saturate, they move towards gray and so it’s like a unifying colour and then when you go out into nature, a lot of the colours that we see are closer towards the grey than we might realise. Even people’s skin tones.

And when you think of a colour wheel, the superstar colours on a colour wheel are on the outer edge, these really saturated, vivid versions of red or of green or whatever. But a master artist is often gonna play around closer towards the middle, closer to the greys and then when they use a more saturated colour, it’s going to have more impact. 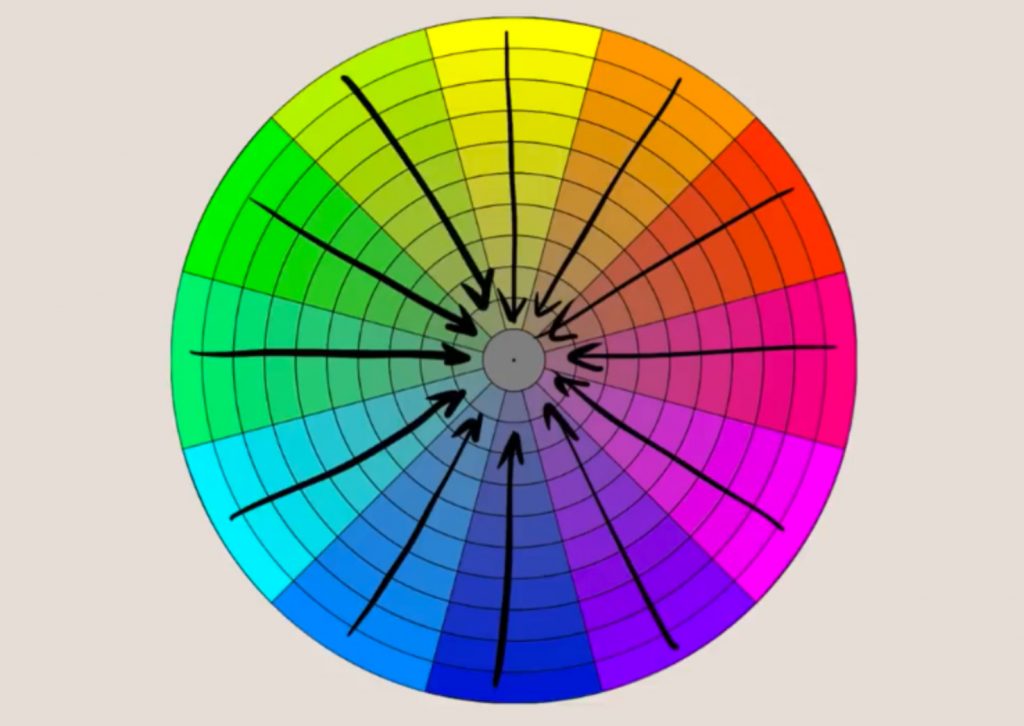 So the use of grey is really important to give the more saturated colour more power. Learning about colour has been way more interesting than I even thought it would be and I hope you guys are enjoying this article.

The next post has some really mind-blowing stuff about colour in it.