We are going to create 4 exercises to train different skills.

So you can do this digitally on an iPad or in Photoshop or Sketchbook or any other drawing app. You can also print out your reference and draw right onto that or use tracing paper.

The first one, we are just trying to find the simple lines we’d use for a quick sketch of this pose. These are lines and curves we talk about here at Love Life Drawing a lot. We’ll look for the outlines of the forms, but also some lines around and across the figure, like across the bottom of the chest or across the bony bits of the pelvis. The torso centre line on the front or the spine line on the back. We’ll look for the form of the deltoid on the shoulder, the collarbones, the brow line on the head. 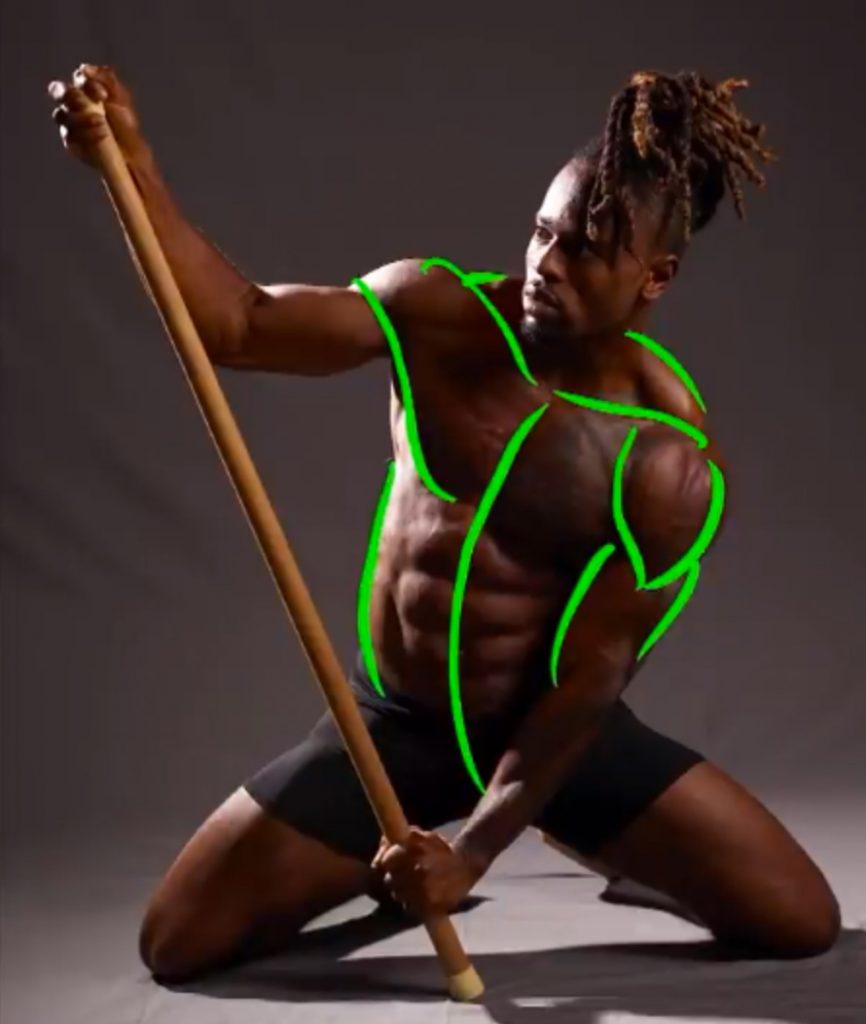 These are important to the structure and the forms. We want to use C shaped curves, S shaped curves and straight lines, and nothing more complicated than that. We’ll also look for asymmetry in the curves as we do this.

So now I don’t need to simplify the figure and draw that simplification at the same time, I am splitting the process into two steps. I just need to draw the ready made simplification I already made. 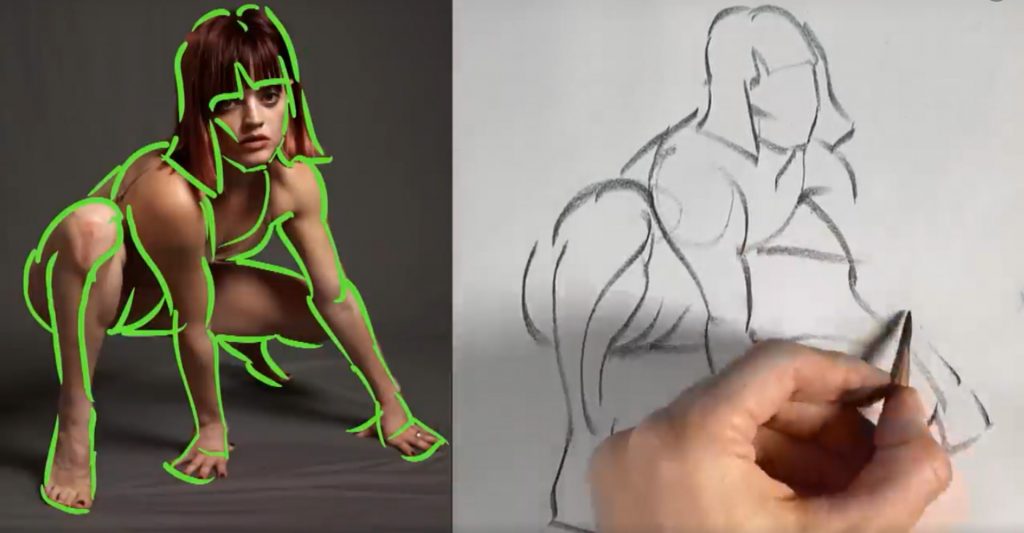 I know that someone will be tempted to comment ‘oh you’re just tracing that’s stupid’. People have a knee jerk reaction to drawing right onto references. Well firstly, there’s nothing wrong with tracing, it’s a useful training tool.

Secondly, this isn’t easy to simplify the figure, even if you’re drawing right onto it so try it before you dismiss it.

The second exercise is to simplify down the values – the light and dark. This is a really important skill. We’ll want a reference with ideally one direct light course so that we have nice clear shadows on it. The first thing we’ll do is remove the colour so we just have light and dark. 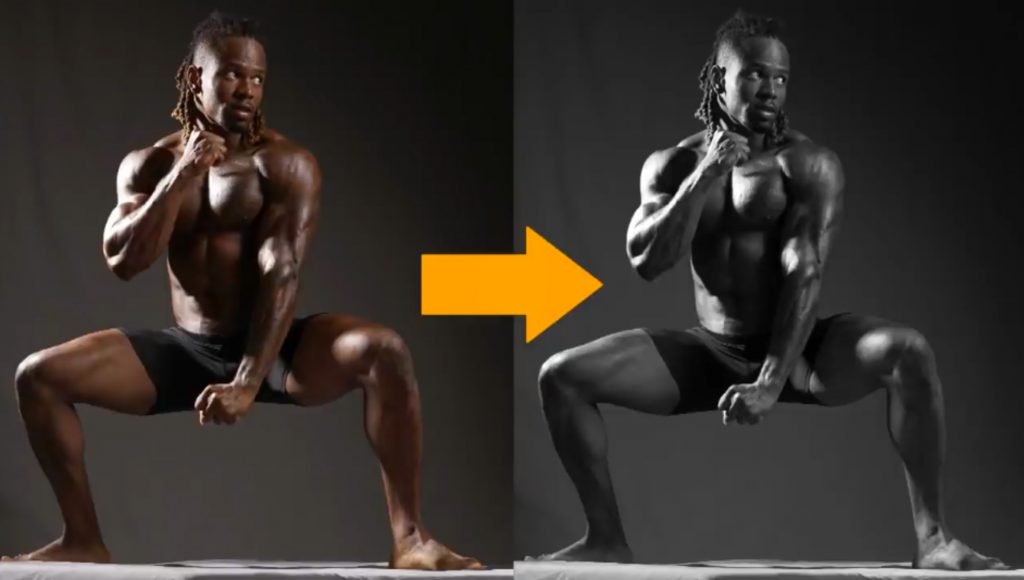 You can do this manually which itself is a good exercise, or something that can help you while you’re getting started is to posterise the image. There are almost infinite levels of value, of how dark or light, each part of the image can be. Posterising it bring that down to however many levels you want. I think 4 or 5 is pretty good. Here is this reference with 4 levels. Notice how large shapes have been created. 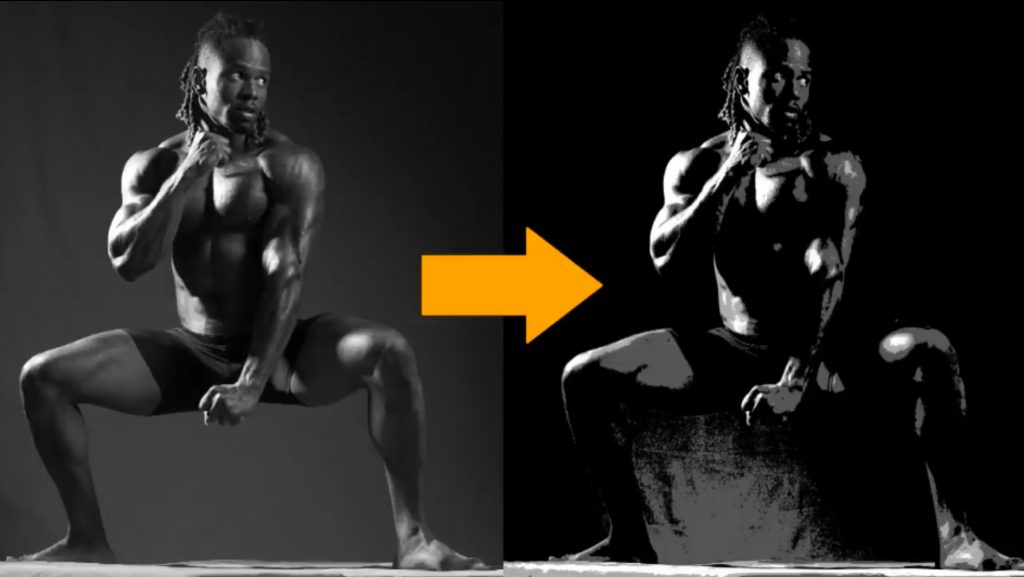 I want to take it further though. I’m going to use 3 levels, so light, dark and mid-tone. 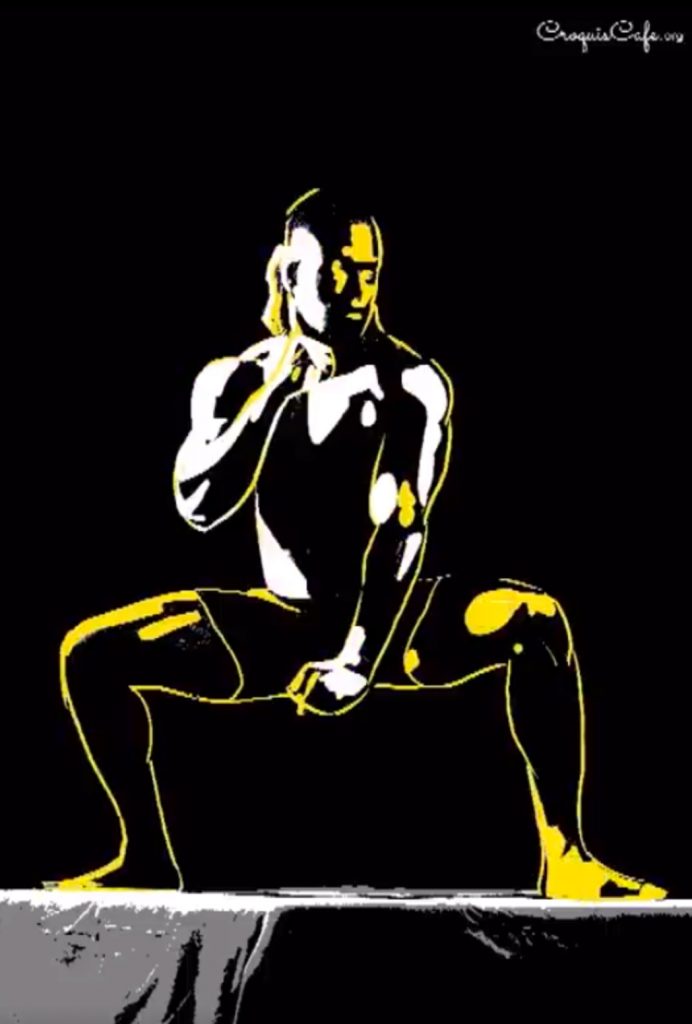 I won’t just use this as it is though. I’m going to merge the midtone and light, and then I’m going to draw onto the shapes to simplify them further and even remove some of them. Just going through this process is working out my simplification of values muscles.

So now I have a set of simple shapes to draw. Why is this is a good thing to do? When you have all the details, your eyes pick up on the little contrasts too much.

When you’re drawing you can squint to simplify the figure’s values, you essentially blur out the details. The problem is then of course it’s hard to see the shapes clearly, so you would squint to understand the bigger shapes and then open your eyes to see clearly while keeping the simplified version in mind. With this, I have the simplified version without squinting. 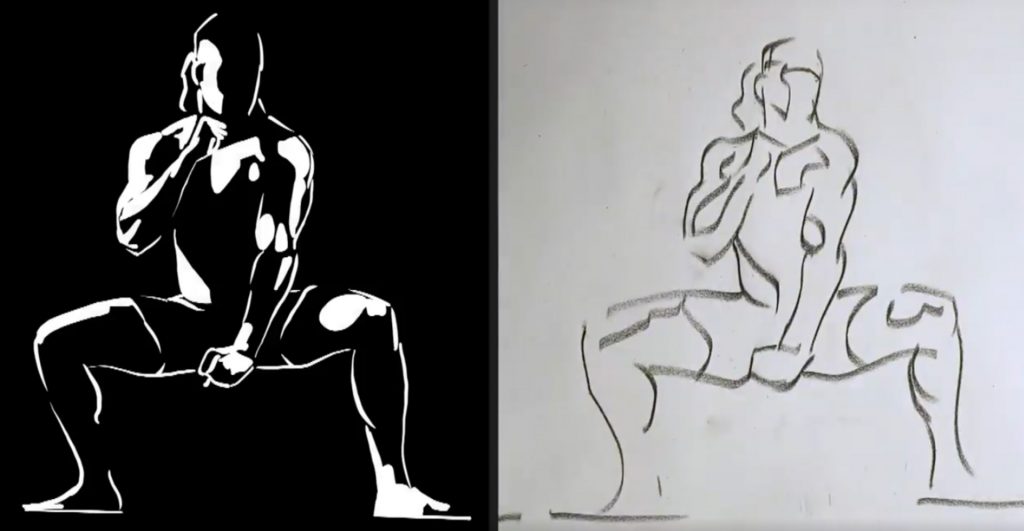 Now we are going to try to combine exercise 1 and 2. We will draw our simplified figure, and we will simplify the values as well, and try to draw those simple shapes of light and dark too. So here I’m starting with my gestural simplified version of the pose that I drew onto the reference. 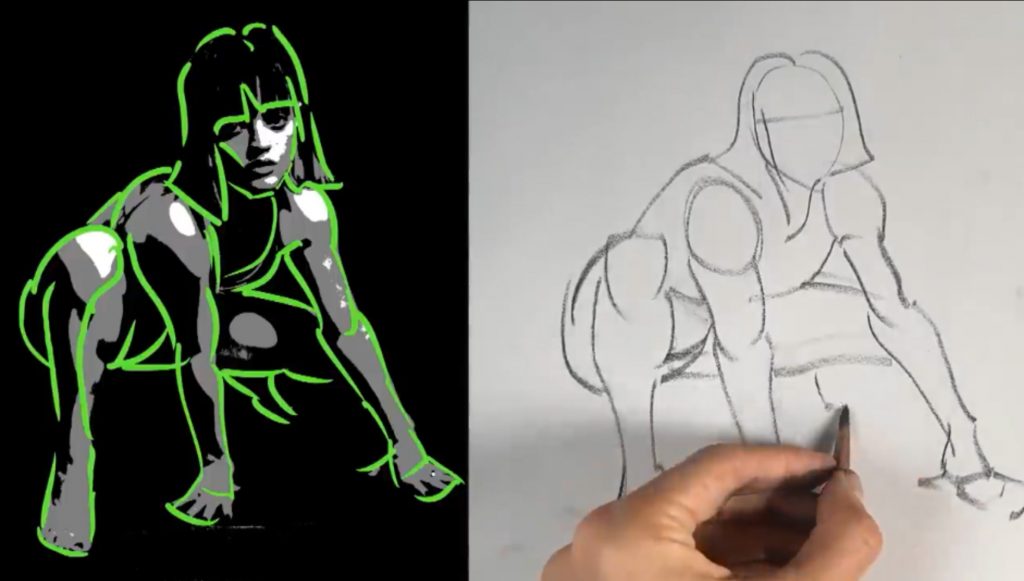 Next I’m trying something out – I’m covering the paper with willow charcoal. I’m going to remove the charcoal to create shapes of light with a putty rubber. 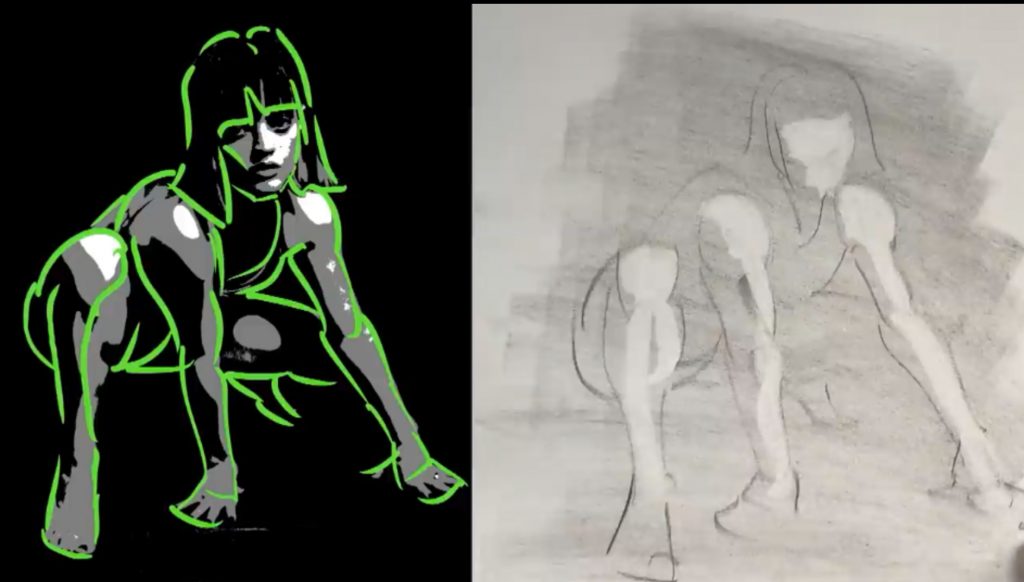 Then I’m adding some core shadow marks, basically emphasising the edges of the shadow shapes I’ve drawn. I’m just doing quick sketches for this video, but you can do longer drawings with these as your starting point too. 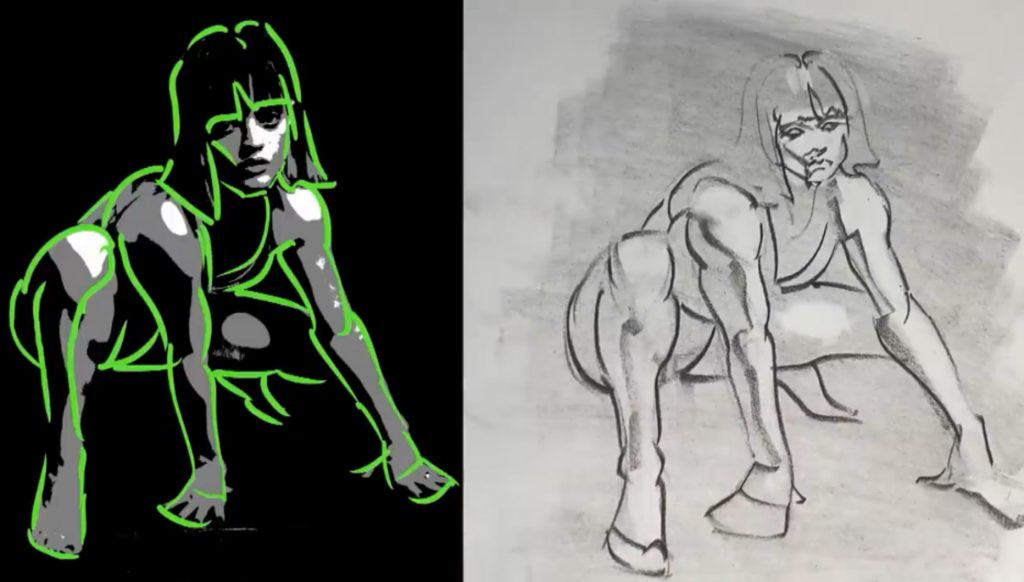 Ok this is great exercise. You may have heard that it’s useful for gesture to be able to exaggerate the pose in meaningful ways. Well it’s hard to do in practice. First you have to figure out what about the pose to exaggerate. In this case, I found that tricky, and you can see I’m trying to figure it out here. 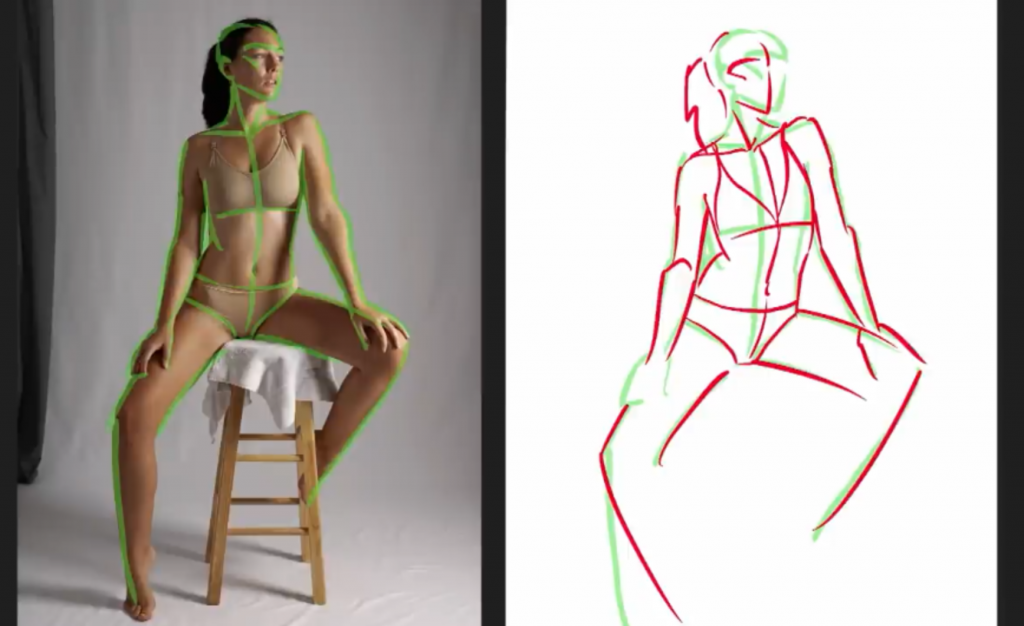 So in this case, I wanted to rotate the ribcage more and have more of a squash on one side and more stretch on another side. Then you have to exaggerate things in a way that the figure still makes sense structurally. So if you want to push the angle of the ribcage, then you have to bring everything else attached to the ribcage with it, like the collarbones and shoulders and so on. You’ll want to squash and stretch the mid-section more to accommodate the exaggerated ribcage angle. 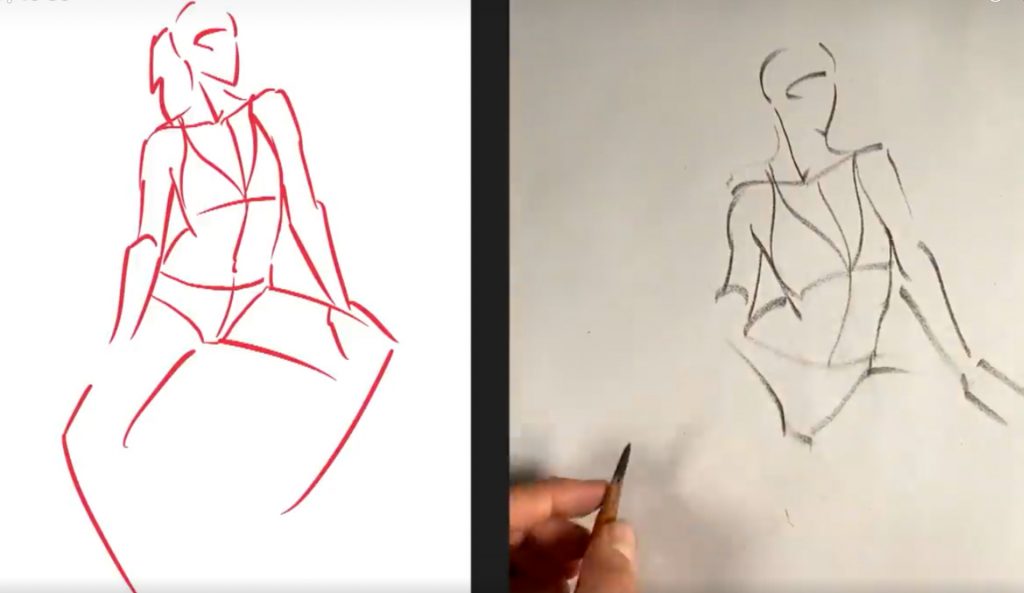 So now I’m ready to draw this now. If I were trying to figure out the exaggeration just from looking at the figure and draw it at the same time, it’s hard and doing it in 2 steps this way makes it doable. Now of course with all these exercises, the ultimate goal is to be able to do it without modifying the reference or from a live model. As you get better and better with this training, that will become easier and easier. When you design your exercises, you want to make sure it’s helping you build useful skills, so we worked on simplifying poses and values and exaggerating.

Sign up to our newsletter below to stay up to date with our tutorials, free live sessions and our wonderful Life Drawing Success guide!