We talked yesterday about using the overhand grip and not using the tripod grip much in short poses because it drags you into too much detail. Sometimes you may have enough time to add a feature or two without detail and still keeping that grip.

We sometimes use little shorthand marks that just give some essential information about a feature. They are extremely simple, like just a little flick of the wrist, and because of that they have some charm. You can make them with that overhand grip. Often these simple lines that indicate some facial details can be put down with softer, wider mark than you’d use for an outline. These aren’t supposed to be hard, clear marks, but just gentle indications.

Here are some useful ones to try. The shade under the nose can be drawn with just a little line – a flick of the pencil or whatever you’re using. It tells the viewer the length and depth of the nose.

The line of the eyebrows. This tells the viewer the direction the head is pointing, and they can also start to fill in where the eyes will be and where the nose will start.

The ‘corner’ of the face. Generally, the cheekbones and eye sockets create a sort of corner on the face where you go from the plane of the face to the sides of the head. The ‘plane’ of the face is not flat at all, but there is usually fairly clear transition from the face plane to the sides.

If you have more time like 5 minutes, you could draw the facial features more fully, but you don’t have to. If you do, look at the shape under the nose, the shape of the eye socket and the area of shade under the chin. 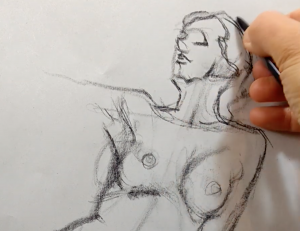 You can choose whichever of these is standing out to you, whichever will tell the viewer something important. So, today if you are running out of time, just stick with the head shape and an ear to show the direction the head is facing, maybe the axis lines. But if you do have a little time, observe the direction of the shade under the nose or the eyelashes or the brow, and put in a super simple single mark to indicate it in the drawing. See you tomorrow!