Seeing Light. Artist’s eye training while out and about

When you’re walking down the street, you can train your eye to see different types of light and shadow, which is a skill that will help you whether you’re drawing people, landscapes or objects. The video is the best way to take in this tutorial, but if you’d prefer to read it as an article, it is written out below the video.

Training your eyes for drawing is not just about understanding things from books and tutorials, it’s about regular practice, like how an athlete regularly works out. So we are going to practise seeing different types of light and shadow while out walking or sitting on the sofa.

The first thing we’ll need to keep in mind is that light is made up of rays. They travel in straight lines until they hit something. 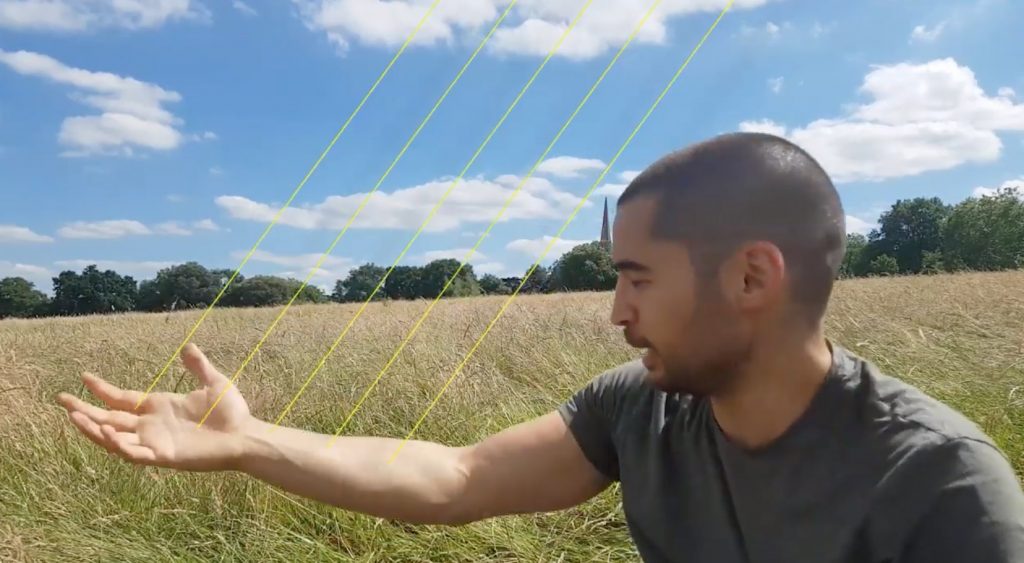 It’s a rare super sunny day in London, so lets make the most of it and think about direct light. So out here the light source is the sun. On a sunny day like this, it’s good to imagine those rays of light coming all the way from the sun and hitting things. Sunlight is mindblowing when you think of it that way. The rays of light that go all the way from the sun, they all have to be going in roughly the same direction to hit this little place on earth, so they are all roughly parallel and that’s useful. 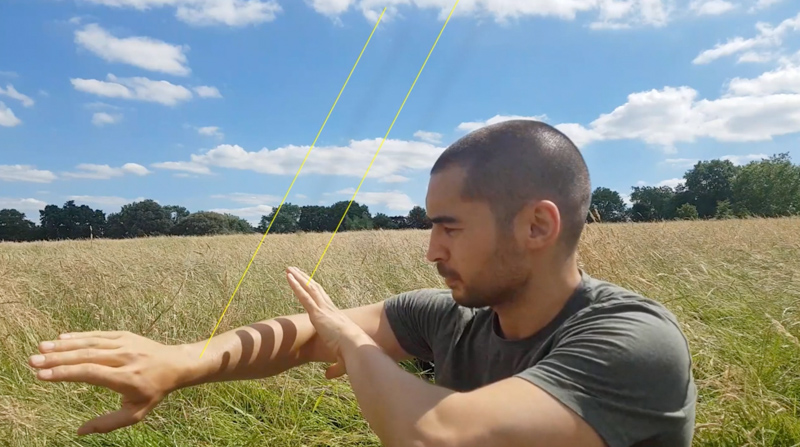 Here the rays hit my other hand and bounce away before they can hit my arm, so there’s light here and not there. That’s a cast shadow, and you can see the edge of the shadow is very crisp and clear. The light is either blocked, or it isn’t.

But wait a minute, why is the edge of the cast shadow when I hold my hand close really crisp and sharp, and when it’s further away it’s fuzzy and vague? It’s easier to see with this tree. Where the tree is near the cast shadow, the edge is sharp, but far from it, the edge is more blurry. 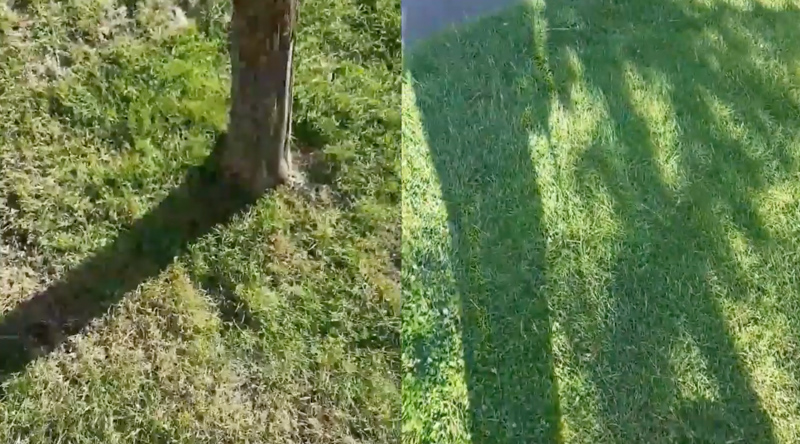 Lets see why this happens using this big lamp. Most light sources don’t emit light from a single point, they have some width to them. There’s light coming out of this end and from that end. The edges are a little blurry because here, light from this side is getting through, but not from this side, so it’s not totally dark and not totally bright. 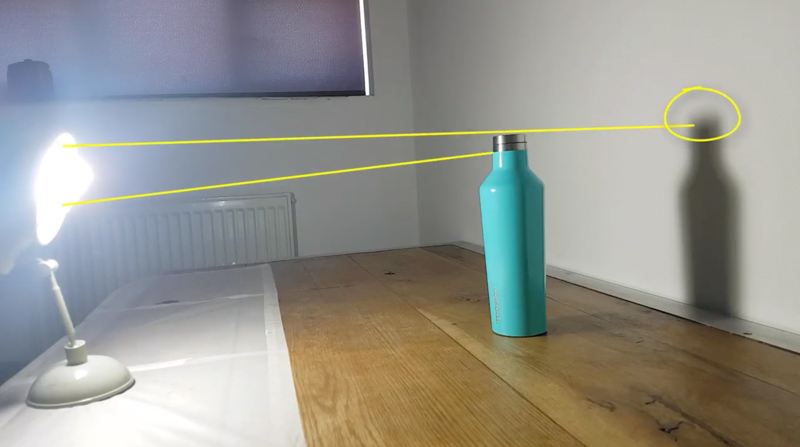 Instead of suddenly shifting from light to dark, it does it gradually. When the shadow casting object is close to the shadow, the effect is smaller. When the light source is small and far away, the effect is also smaller. The sun is far away but also really big, so it has this effect a little bit. Have a look next time you’re out in sunlight. Maggie’s holding the frisbee down low near the shadow and it’s sharp, and I’m holding it high far from the shadow and it’s blurry. 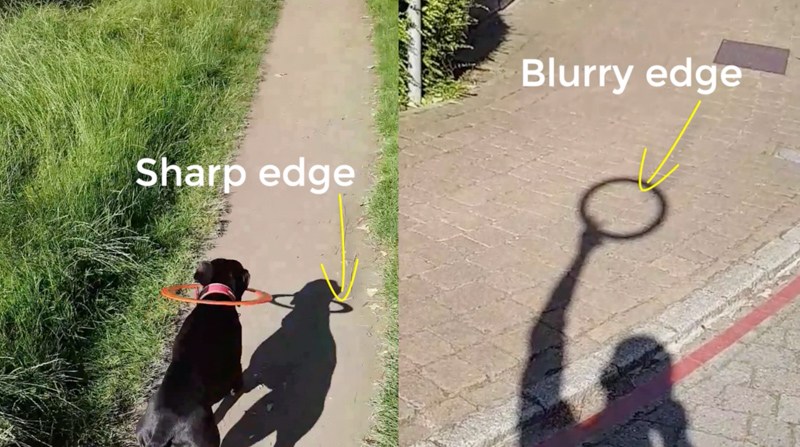 So when you’re in direct light or you’re drawing a figure in direct light, check out the cast shadows, have a look at their edges and see whether they’re sharp or blurry. Is it a crisp and clear shadow or blurry? It could be this phenomenon we just talked about, or maybe there’s a second light source or some reflection affecting it. The more you practise seeing these things, the quicker your eye will pick up on them. 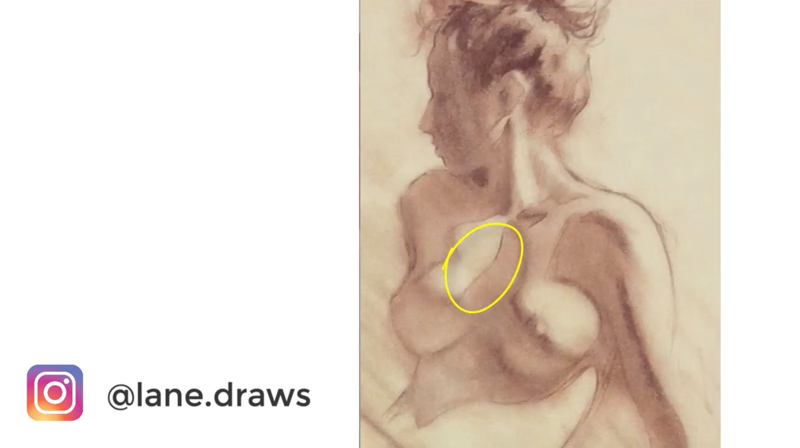 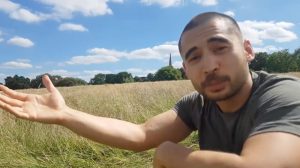 Here light is hitting my arm, bouncing off it and into my eyes and into the camera. This side isn’t hit by the direct light and this side is, creating a form shadow. It’s pretty clear where it goes from direct sunlight hitting it to not hitting it. 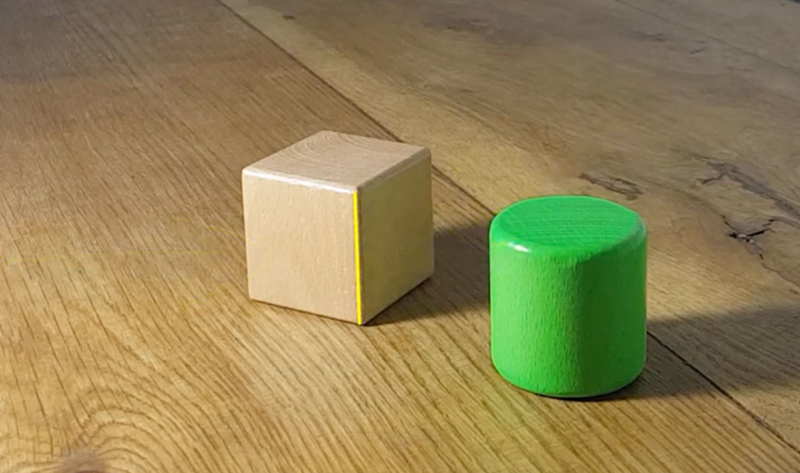 On the cube here, there is a side facing the light and a side not facing with a clearcut corner between them, so the edge of the shadow is super sharp. 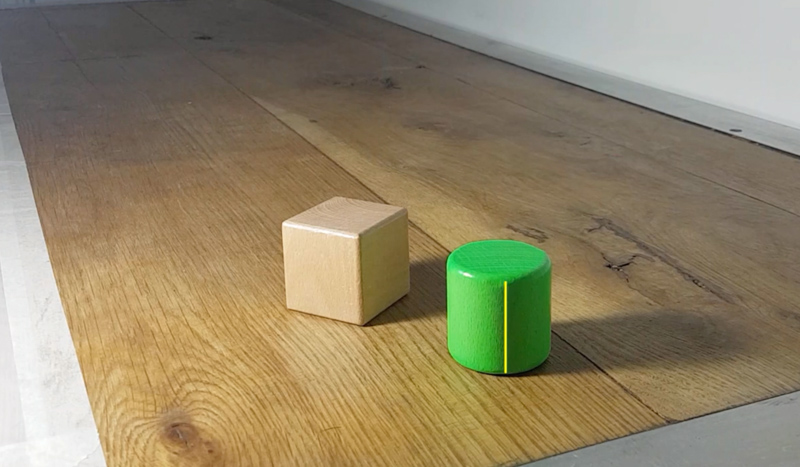 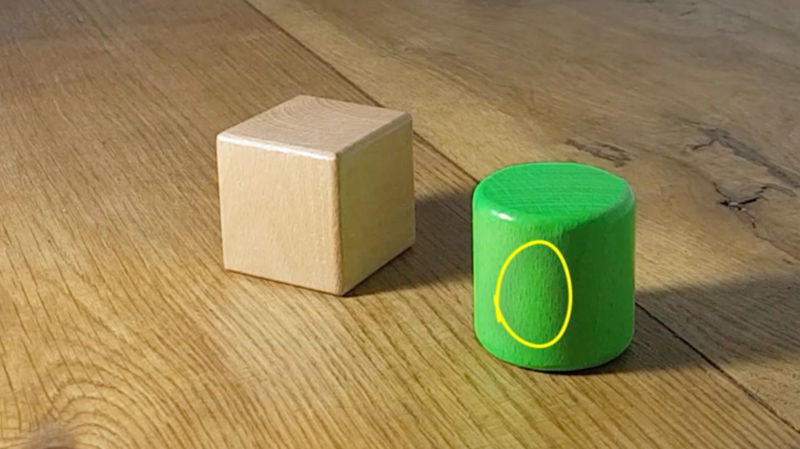 Seeing these characteristics of form shadow edges and understanding what they mean about the surface they are on is super useful for drawing people.

Here, on the surface of the bottle, the corner turning from facing light to away from light is sharper so it sharply goes from bright to shadow. There’s either a lot of light hitting it, or none. So notice the form shadows in different types of light, even your own hand, when it’s being hit with direct light, and see the edges of the shadows. Are they sharp or soft? What shape are they? What does that tell you about the surface?

Light in the shadows

Somehow even though the direct sunlight is blocked here, you can still see me. That’s because after hitting something, light rays continue to bounce around, and some bounce into the areas the direct light wasn’t hitting. But when light bounces it loses some of its power and there’s less light hitting these areas. 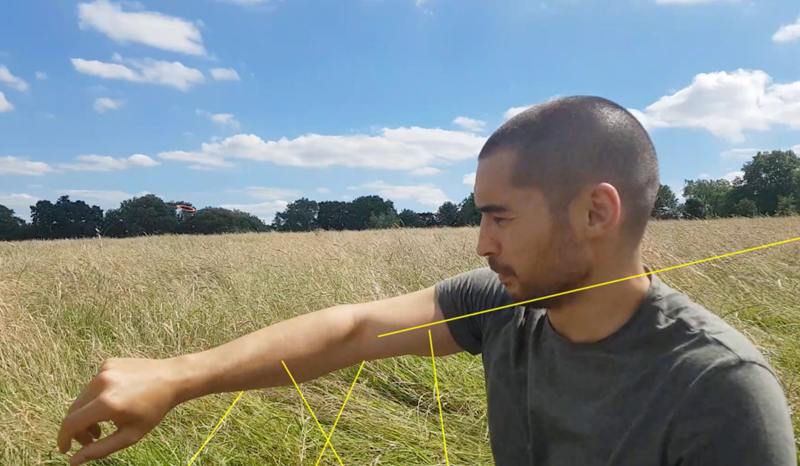 Some of this light is from the sky, because sunlight doesn’t just directly hit the earth, but some is bounced around by the atmosphere. The blue light is scattered around most and that’s why the sky appears blue.

Sometimes in a shadow, you can see a clear bit of reflected light from a specific thing. Here there’s some orange light reflecting off the book into the shadow on the bottom of the egg. But there’s also just a more general, random bouncing that doesn’t come from one specific thing. 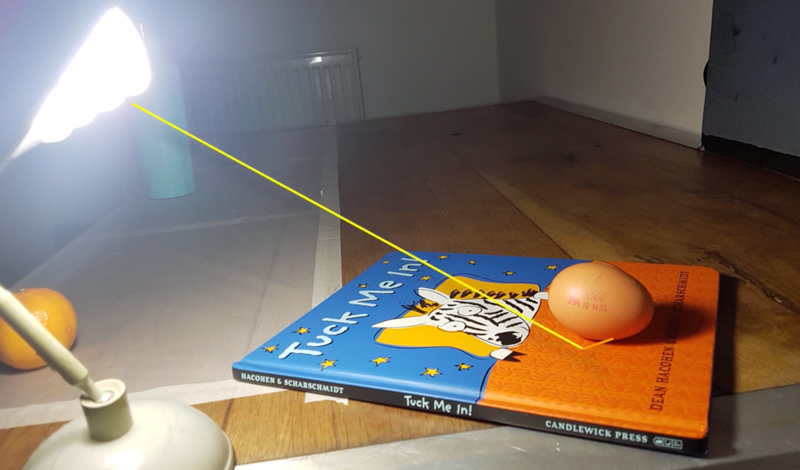 So again when drawing people in direct light, you can see some light is bouncing around even in the shadows. It’s usually not got a clear direction, and it’s not as strong. If you don’t have much time, you don’t need to worry much about what that light is telling you. You might notice some more clear reflected light from a nearby thing like the floor, and maybe that’s important enough to include. But generally, what’s happening within the shadows is like a sideplot to the main story which is where the direct light hits and doesn’t hit. 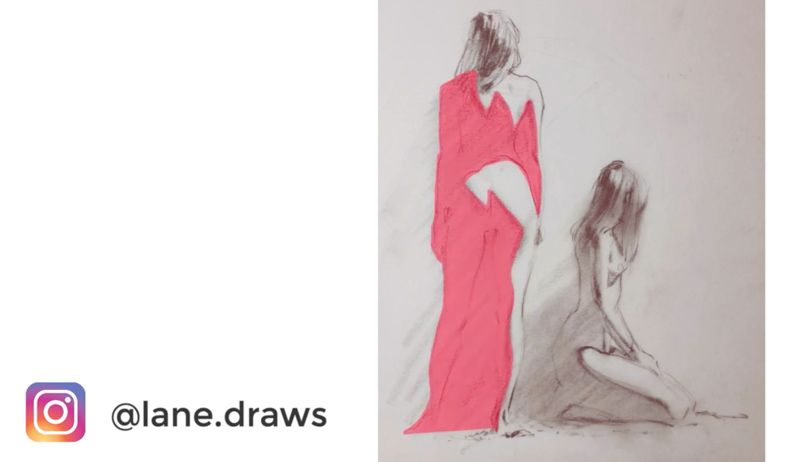 If you do draw it, it’s good to not let it overtake the main story. This video is about practising seeing these things during daily life, but I’d also recommend looking for where artists have applied these things in their drawings. Check out this drawing – see how there’s loads of nuance and information in the shadows, but the contrast is low, it’s kept subtle. If you squint a little, all that disappears. The main story is still dominant. Ok cool, we are back on track, things are making sense. 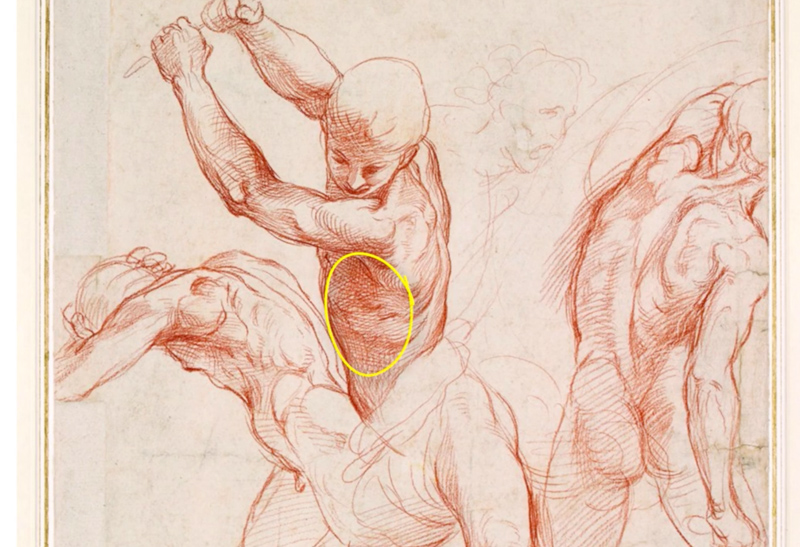 On an overcast day, this street looks totally different. This time the direct rays from the sun are hitting the clouds before they reach us, so we don’t get those parallel rays coming down. Instead we get scattered, less powerful rays. It’s a little bit more like what we saw in the shadows before. There are still places where the randomly bouncing light is less likely to get into so they are darker. But their edges are much less crisp and they aren’t defined by a specific light source.

Sometimes an overcast day feels gloomy and not as nice as a sunny day, but it’s on an overcast day when you can get a clearer sense of the place. Everything is more evenly lit. Also, the light is more neutral and doesn’t affect the colours so much – that’s something we’ll talk about in a future video. Have a look next time it’s cloudy.

Often light is sort of similarly scattered indoors. Light from windows and lamps bounce around the walls or are diffused by lampshades to help create more ambient lighting.

It’s useful to notice whether what you are drawing is lit by ambient light or direct light. If it’s ambient light, you won’t have as clearcut form shadows to help explain the volume, which is why Croquis Cafe uses a clear direct light source. But even with ambient light, there will still be variation in the light to help you, and it’s more calm and even type of light. When filming a video or taking photos, you often want to use diffused light to capture the subject, because direct light is so dramatic and can take away from the subject itself.

When indoors, especially if the room is lit by lightbulbs, the light sources are closer and smaller. I had a habit of thinking of light as always coming from a few directions in a scene like this. Like all the light is coming this way and a little is bouncing off this wall and coming back and that’s it. But here the light is coming from here. So its direction will vary a little bit, especially if it’s close to the subject. And it’s not just a point, it’s got some width to it. So some will go like this and some like this. If the light source is small it might not get far around the subject. If it’s big, it might wrap far around the subject. I know that seems obvious, but I never really thought about that much before, so now I’m looking for these things during daily life. That way, when I come to drawing, my eyes will pick up on these things quicker.