The Figure Drawing Roadmap – all the skills, in order, part 1

We want beautiful artwork and to do that, we want really good skills. The approach I first took to trying to get those skills can be described as ‘all at once’. I wanted results immediately. It didn’t work out as you can imagine.

What you need is a series of exercises in the right order, because each skill builds on the next. It seems insanely obvious. But what is that sequence? What do you need to learn and what order do you learn it in?

It might feel like I’m listing a lot of things below, but it’s because I’m breaking up some bigger skills into smaller ones, so that it’s more bitesize and each one is not overwhelming. I’m going to share some example drawings, but I’m going to use actual drawings I did when I was first learning all these skills. By using actual beginner drawings, I’m hoping that you will be able to set more realistic expectations for your progression. Very often, you’ll see masterful demonstrations in tutorials which set crazy high expectations for what a student should be able to do.

Are you trying to pick out the main landmarks of the figure, thinking about the centre line on the torso, the collarbones, looking for the bony bits that stick out on the pelvis, or on the back, the sacrum triangle, the spine line, maybe even thinking about the shoulder blades? 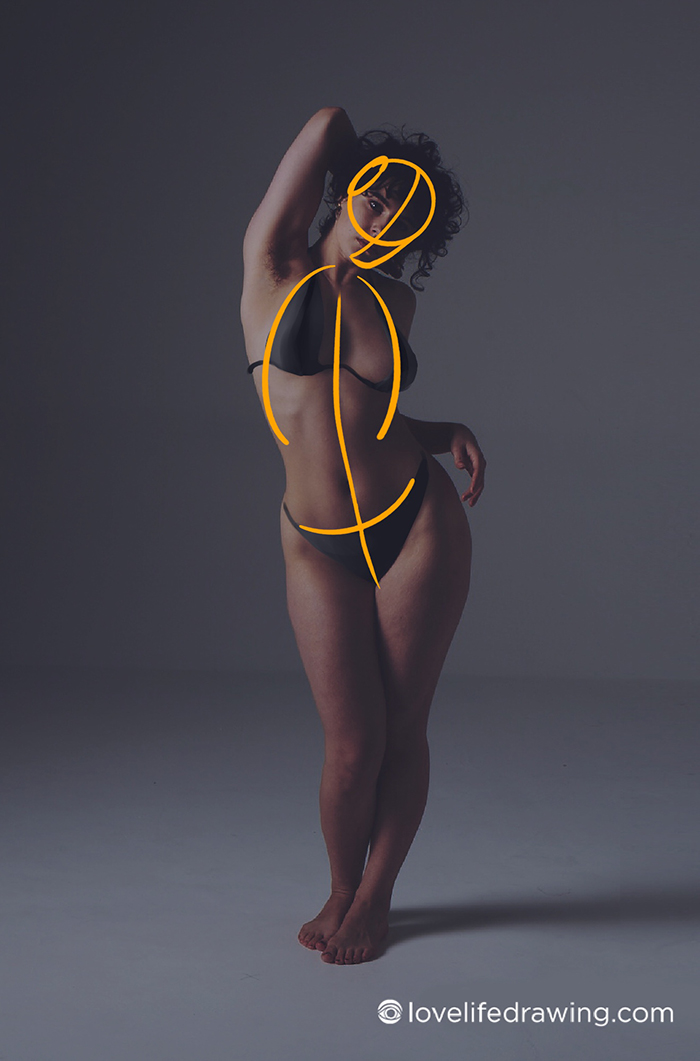 So let’s look at two beginner drawings. In drawing below (left) from a few years ago, I wasn’t thinking about landmarks at all. I was just really trying to draw a head, a torso and add some arms and legs. But in the drawing on the right, I was thinking more about landmarks. Mayko (my mum and a pro artist) told me about the bony tips of the pelvis and the ASIS, so I became aware of the pelvis. I was still having lots of problems, but this was a step forward. In that drawing on the right, you can see I’m trying to find the sacrum triangle on the back, I’m trying to see shoulder blades. I wasn’t getting it all correct, and it’s still just a few major landmarks, but I was starting to see. It might not seem like a huge change was made between the left and right drawings, but there was a huge improvement. It’s useful to know that great progress doesn’t always look like beautiful drawings. 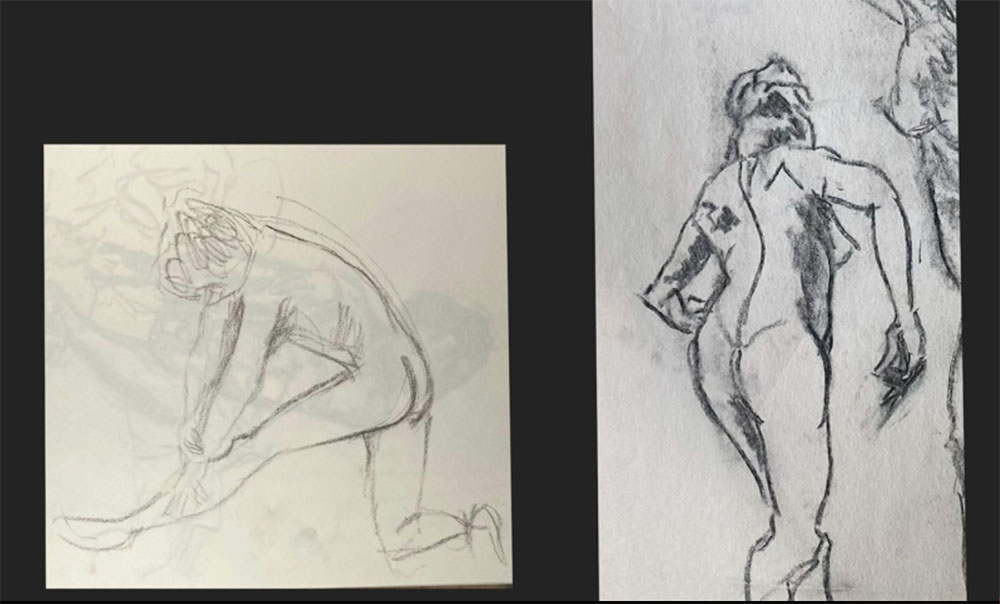 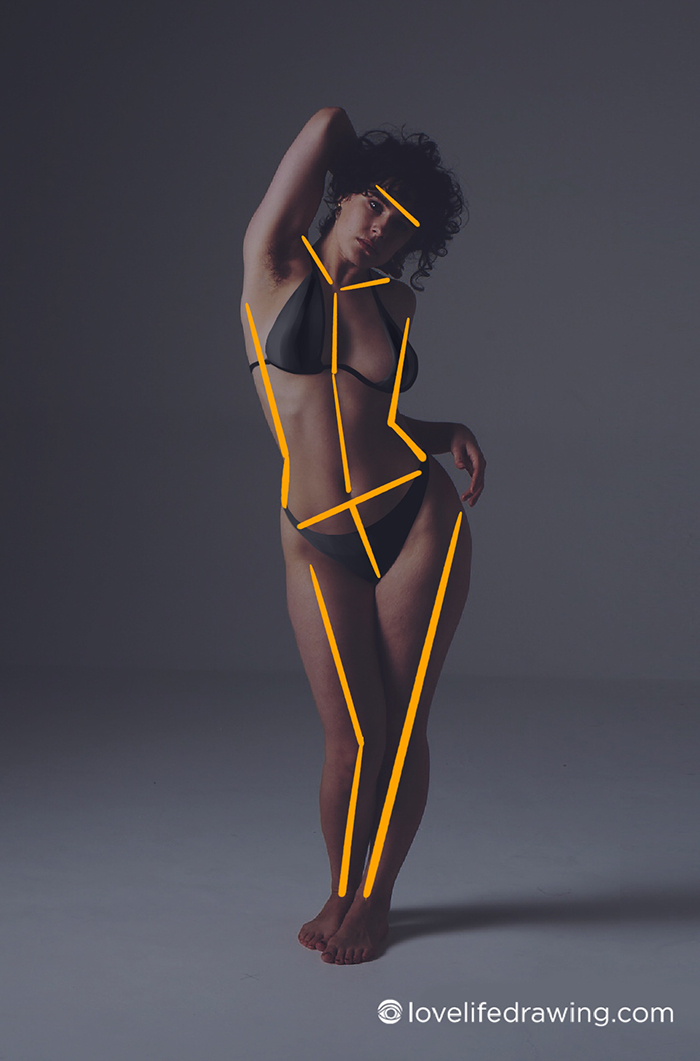 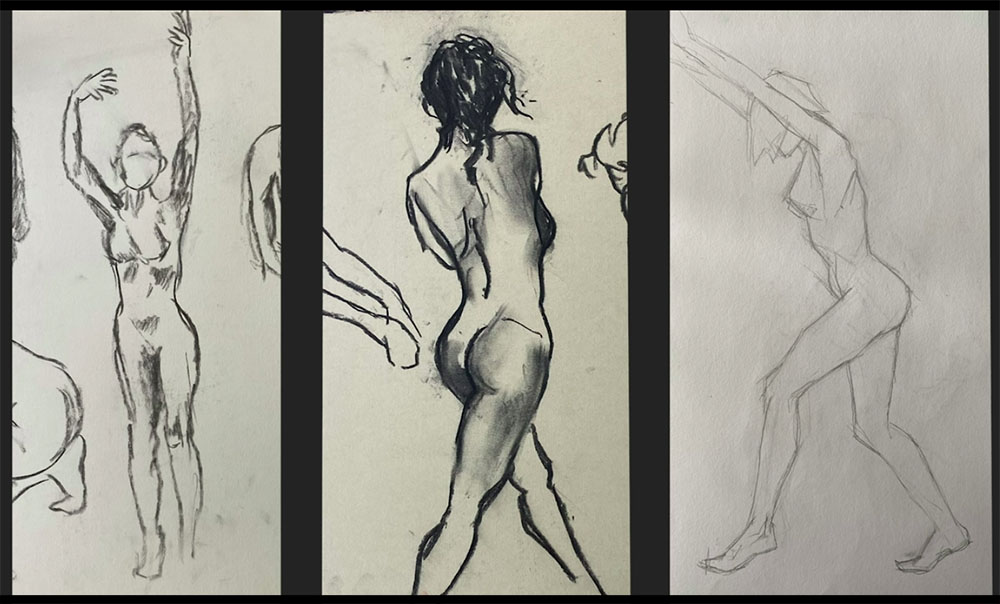 Are you getting the different parts of the figure roughly in proportion to each other? Notice that I put landmarks and angles before proportions on this list, because it’s hard to figure out proportions without seeing landmarks and angles first. You don’t need every little part of the figure to be the perfect size, but distances between landmarks is a great start. The beginner drawing below was rough round the edges and there’s a lot to work on, but the proportions are pretty natural – a big improvement on how I had been drawing previously. So again, big improvements don’t always result in beautiful drawings, so it’s worth learning to assess your drawings based on whether they show you are using specific skills rather than whether they look great or not. 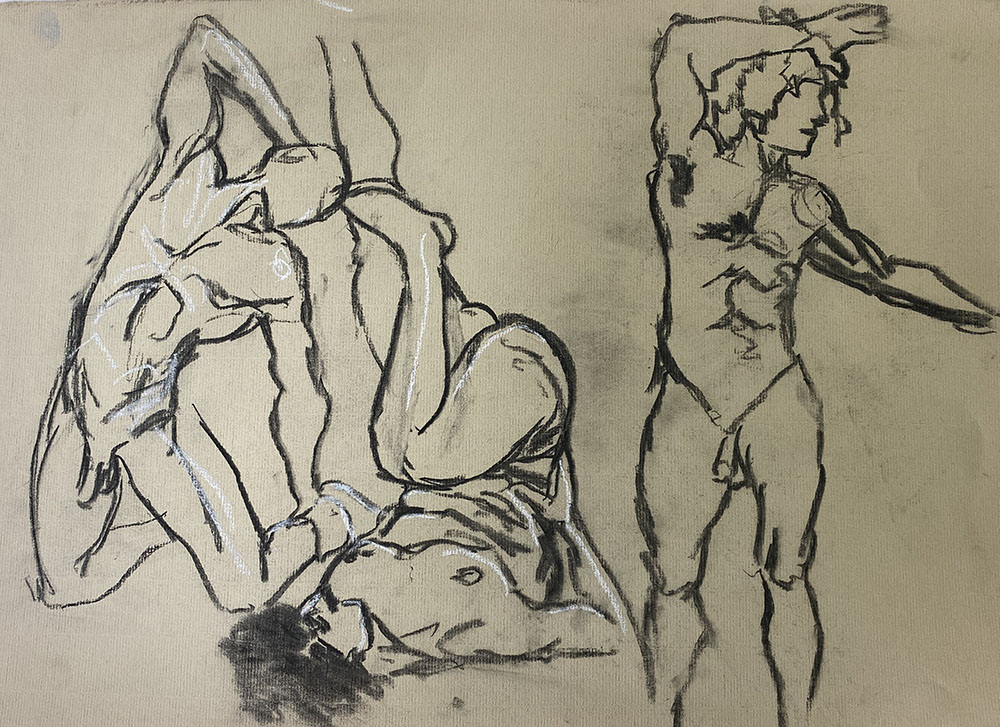 You’ll notice that I called this rough proportions, not accuracy. You don’t need to be accurate and just like the reference. You just want it to feel reasonably natural, not have a massive head or whatever. It doesn’t need to be exact.

Are you using a little bit of basic anatomy to help you see things more clearly. I’m not talking about knowing every forearm muscle, just the bigger stuff. Do you know where the pecs start and where they go to? 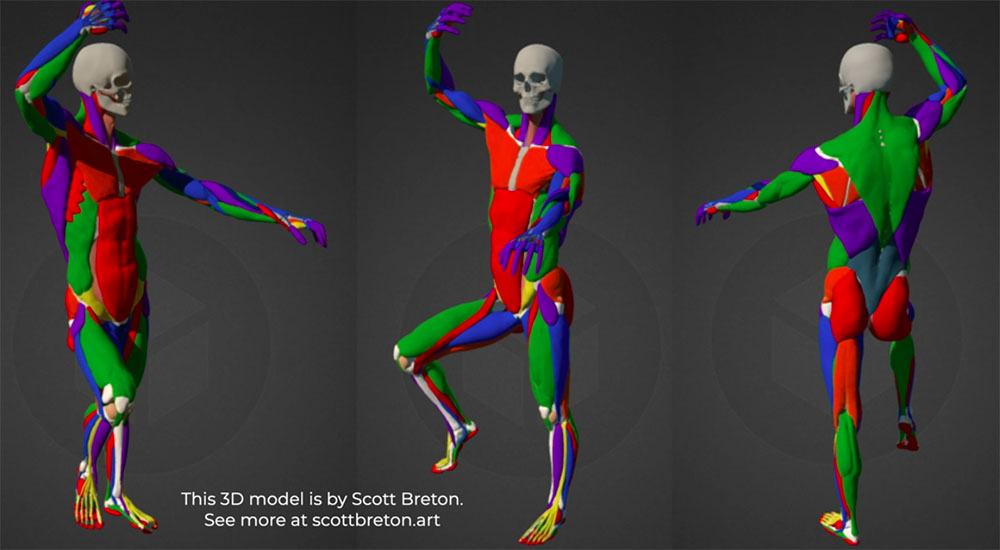 Are you able to visualise where the ribcage is within a lot of figures? You don’t need to be perfect here, but are you starting to see these ideas sometimes?

In the drawing below (left), I had no real idea of what muscles actually do. I was not thinking about how the back muscles connect to the arms, for example. In the middle, I was starting to learn a little bit but still struggling. Then on the right, I was using my basic knowledge more.

Are you seeing any simplified forms in the figure? This doesn’t have to mean you draw with cylinders and boxes, it could just mean that you are seeing simple planes and using cross contour lines. When drawing this pose, I might use a cylindrical form for the thigh. 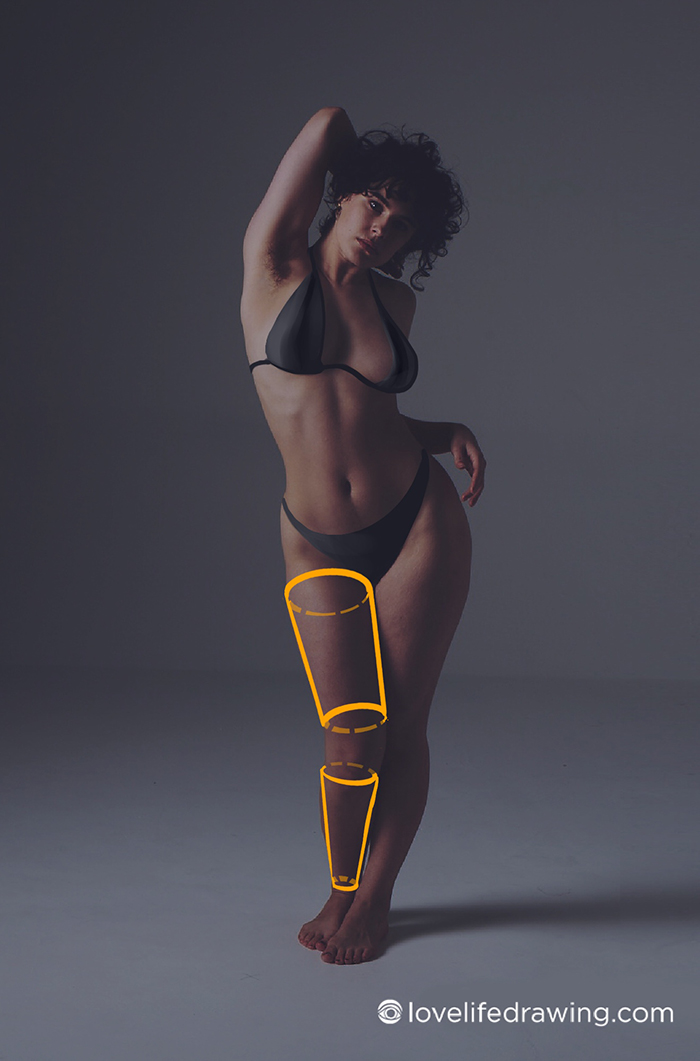 So in the drawing below (left), I was drawing with no attempt at seeing simple forms. In the middle is a realistic example from my first attempts at this idea. You can see on the thighs, I was trying to show with cross contour lines how one is coming towards us and one is going back. Is it beautiful and amazing? No, but it’s a step forward in a journey of 1000 steps. Then on the right, I was really getting to grips with the idea, and even using boxes in the torso. 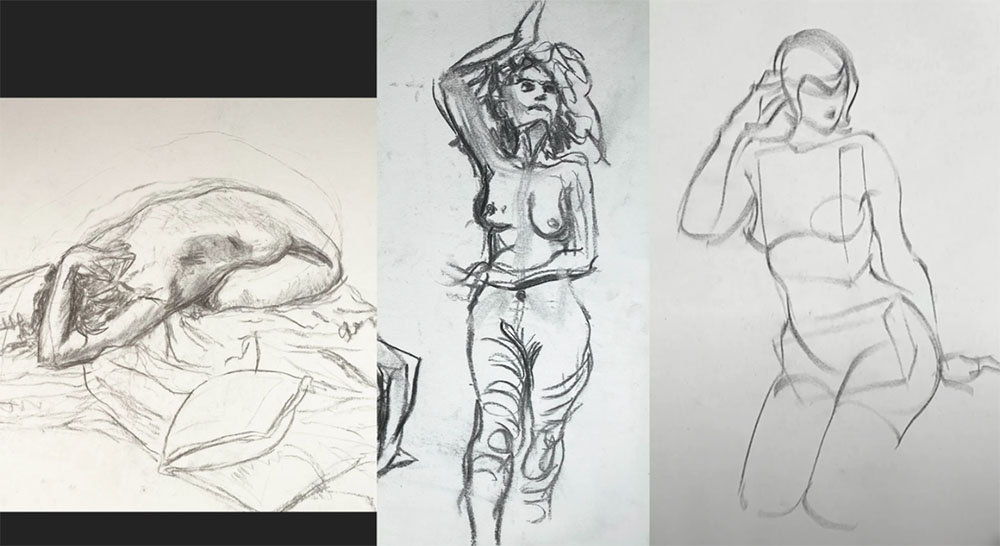 Are you able to take the complexity of the values in the figure, the light versus dark, and turn it into a simplified set of shapes of light and dark? 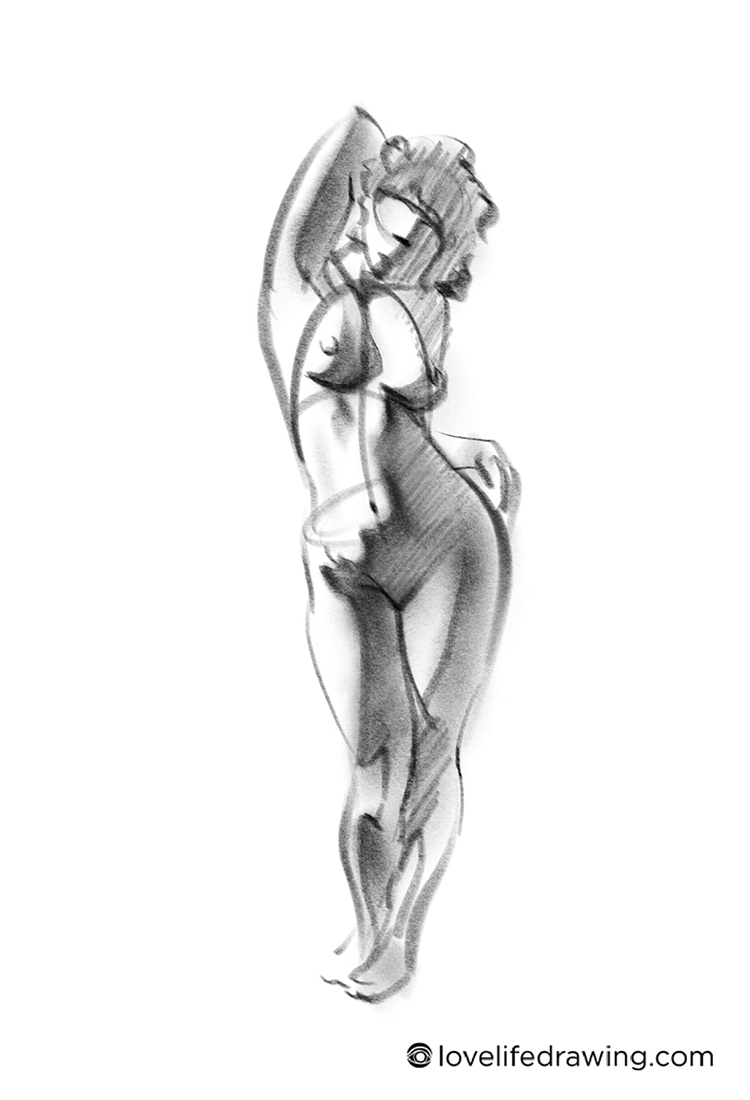 So you can see on the left I was not even trying to find simple shapes, then in the second, I was trying to simplify the shapes, but still getting caught up in unnecessary complexity, but I was trying my best and that’s great. Then on the right, you can see I was using some fairly simple shadow shapes. They were still too complex and there are still mistakes, but I was going in the right direction and that’s all I could ask of myself.

Ok, it’s time to start thinking about one of the most fun and important aspects of life drawing – gesture. Now, you’ve actually already started to learn some of the components of gesture because you are starting to simplify and more importantly you are starting to capture angles. Good dynamic angles are the heart of gesture in my opinion. However, there’s more to it, including asymmetrical curves and finding big flows through the pose. 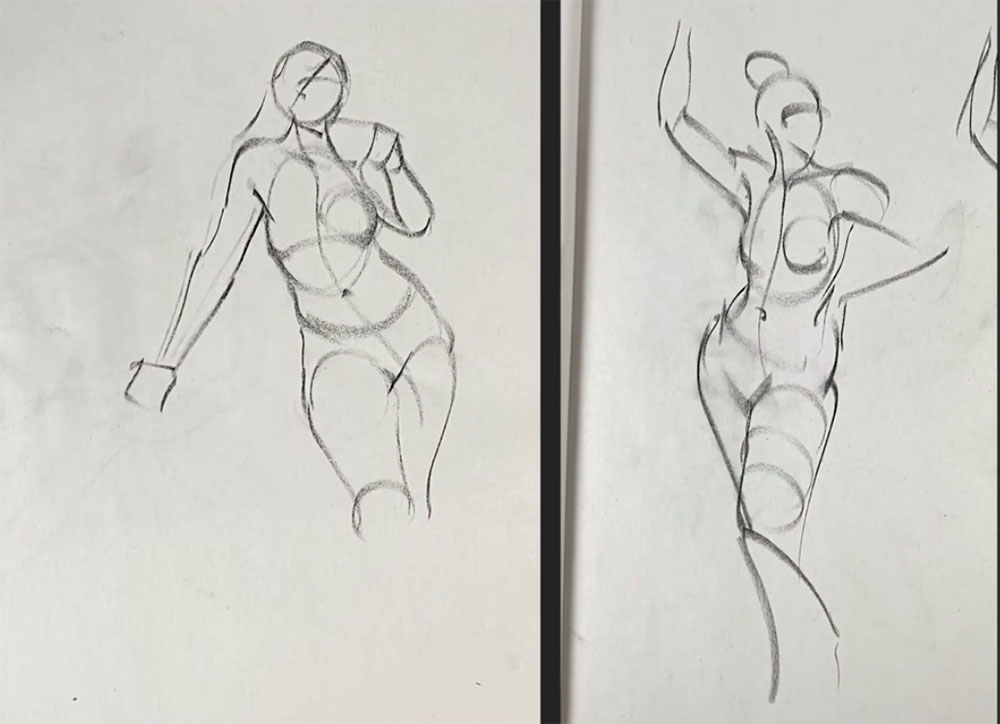 We have a ton of tutorials on gesture, but notice how late in the list I’m putting this. It’s often put in at the start of a course or a book, because it’s often how you start a figure drawing, but in my opinion, it’s not where you start learning figure drawing. You need those other things in place before worrying about this. But then once you are ready, this is something you should be practising constantly and will be part of everything you draw from then on.

We’re halfway through this two-part series but before going on, I have to make this point. It’s better to get a good intuitive grasp of the very basics rather than trying to get to an expert level of knowhow. A lot of us want to feel smart and research things and gain more knowledge. You don’t need more knowledge and advanced ideas, you need to get really comfortable and skilled with the very basic and easy to understand things. With perspective, the idea that things converge to a vanishing point – that bit of theory is fairly simple. From there you could go down a rabbit hole of super interesting perspective ideas and read about fancier and fancier things. But instead, stay on that idea of converging lines and get skilled, get intuitive with it. In other words, you can draw a good box freehand and it looks and feels good. Learning more advanced knowledge might feel like you’re doing good work, but to be honest you are just avoiding the hard practice of the simple things that you really need. Same with anatomy – you could memorise every forearm muscle’s latin name, which feels like hard work, or you could practice seeing the basic form of the ribcage in different figures and poses better and better, which is the real hard work you need. Ok, let’s get to the next one.

I have made this into a checklist pdf that you can use to assess your drawings (HERE). It will help you figure out what you need to be practising depending on where you are, with suggestions for ways to practise those skills. The PDF suggests to you how to assess your drawings to figure out where you are, then suggests which skill to focus on and which exercises to do to build that skill.

So this journey is not complete, this is just part 1, we have more skills in the second part which will take us through to intermediate and even advanced level figure drawing. Click here to read part 2.

Last but not least, if youre interested in improving your life drawing skills, I’d really encourage you to check out the Fresh Eyes Challenge. It’s a FREE ten-day drawing challenge all about transformng the way that you see the figure, and it’s suitable for all abilities, whether you’re a complete beginner or an experienced artist.