Lesson 6 – Putting it together

In the last two lessons, we developed our superstickman and then learned a new element – the mass of the ribcage. We are now going to look at the pelvic area, and then put these elements together.

It’s best to watch the video, so you can see the demonstrations, but if you prefer or don’t want to use up data, we have also written out the lesson below.

So the pelvic bone looks like this model (another from Scott Breton – try clicking on it, then clicking and dragging to look at it from different angles).

Pelvis Simplification 5
by scottbreton
on Sketchfab

But we don’t really want you to learn this shape at this stage. It’s not the easiest thing to see in figures, and it’s hard to make use of this shape to help build your drawings. Using a simplified plant pot shape is an alternative approach, but also can get confusing depending on the pose.

What we’d like you to do is really simple – just draw the circumference of the figure at that pelvic line we already identified with our superstickman – basically following the line that the waistband would run along on a normal pair of underpants, all the way around the figure. On the front it’ll run across the bony tips of the pelvic bone and at the back, it will run along the top of the buttocks, like a basic pair of underpants would. For poses viewed from the front, we’d like you to also draw in the triangular shape that slants down from those tips of the pelvic bone down to the crotch. We can use that torso centre line on our stickman to guide us. 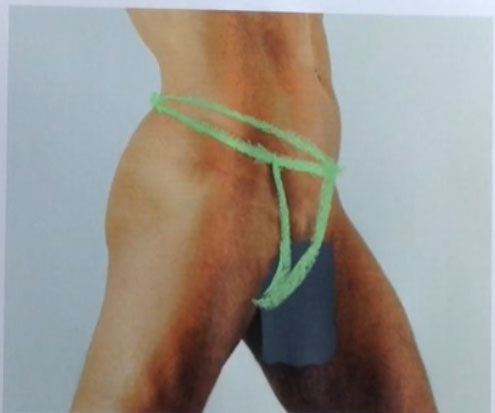 Unlike the ribcage, we aren’t basing these shapes on anatomy within the figure – instead these pelvic area lines are just useful and easy to see or imagine on the surface of the figure.

Possibly the trickiest part is imagining where that waistband would run around the figure, where you can’t see it, but with practice it’ll become easier and easier. Keep in mind that it’s often going to be tilted forward a little. It’s not the end of the world if you get it wrong either – there’s going to be lots of correcting later in the drawing.

These shapes are really just advancements from our superstickmen. So we’ll be practising the pelvic area shapes while doing constructions of the whole figure, which we’ll explain now.

Putting the elements together

We are now going to make our superstickman process more advanced, by adding the ribcage we practised in the last lesson, and advancing the pelvic area like we just talked about.

When you first practise this, we’d like you to go through the following process:

1 – select a standing pose viewed from the front

2 – draw the head and upper torso part of your superstickman – the head, v of the neck, torso centre line, and the lines of collarbones to the shoulders.

3 – add the ribcage shape. To determine the angle and position of the ribcage, we already have the line for the front centre of the ribcage, aka the sternum. You can often see the bottom edges of the ribcage, and you can also see where the top would be. If you need to, you can adjust Scott Breton’s 3D model to match the pose and use that to help you.

4 – add the pelvic lines – use the tips of the bone that you identified earlier and imagine the where the waistband of a pair of underpants would run around the body. Combine this with the torso center line, to understand the position and angle the triangle should be at.

5 – add the arm and leg sticks. For these, we are just putting in the rough direction and length, nothing too fancy for now. We’re going to flesh them out in the next lesson. 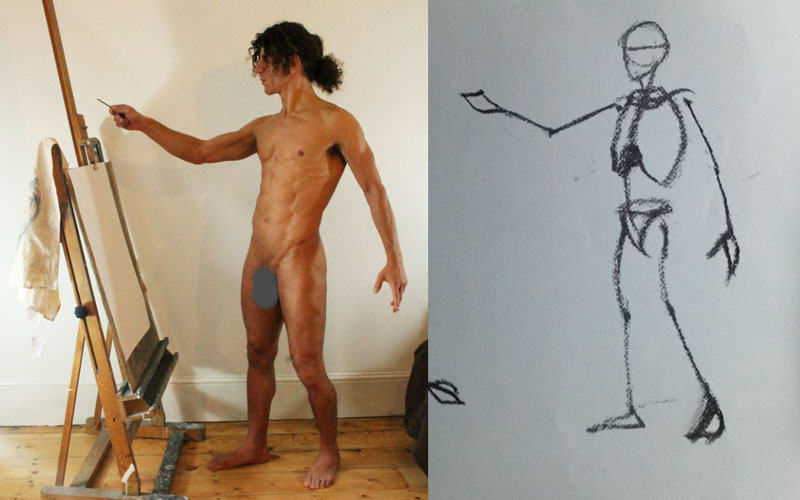 If you need to make adjustments after adding these elements, for example you notice your collarbone lines aren’t in the right place after you added the ribcage, that’s great. Corrections are just what we would hope for – it means our lines are getting closer to where they should be.

The exercise for this part of the lesson is simple – we are going to draw constructions for front view poses for a maximum of 5 minutes each.

You’ll find that you consistently make the same mistakes – your brain’s bad habits. You may find your straighten the pose out, or that you draw the hands too small, or you keep abiding by incorrect preconceptions of anatomy such as ‘the head must be above the shoulders regardless of the angle from which you’re viewing the figure. I’m very aware of my own regular mistakes, and yet I still make them. The more I understand them though, the more control I have over them.

In this next lesson, we are going to learn how to start to undo our bad habits and get proportions, angles and positioning right.

If you’re in need of any extra figure drawing reference images, you can check out our fantastic reference library HERE