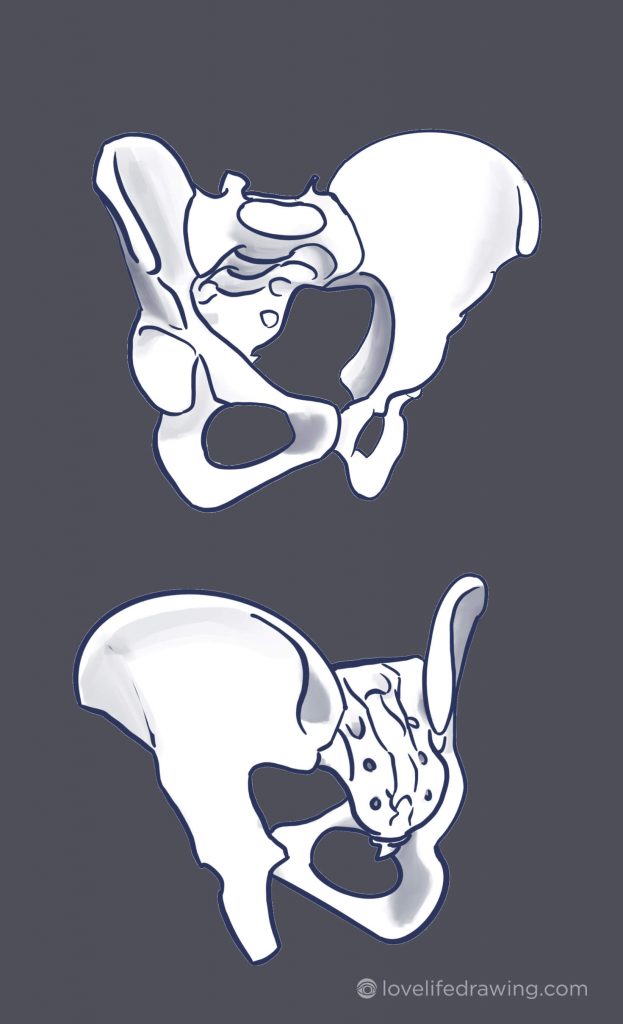 Now, I have a little confession for you. I haven’t studied the complex shape of the pelvis very much at all. We’re going to bypass a lot of the complexity and really focus on the things that are going to help us to draw better, just as we did with the ribcage. For the pelvis, we’re actually going to take even more liberties as we heavily simplify it.

Have you heard of the 80/20 Rule? Quite often, when trying to achieve an outcome, 80% of the benefit of the improvement will come from just 20% of the effort. In this case, we might be closer to 90/10. 10% of the information about the pelvis is going to give us 90% of the drawing benefits. So, before the anatomy police come and arrest me, let’s give you that 10%.

Find the angle of the pelvis

The first thing to do is figure out what angle the pelvis is on. If we’re looking at it from the front, we’re going to do this by checking the ASIS points.

So what are the ASIS points?

You can think of the pelvis as having an opening around the top, like in the diagram below. But the bony bit, the actual pelvis bone, doesn’t go all the way around. If you feel the front of you, you’ll notice that it’s kind of soft at the tummy,  there’s no bones there, but if you come out to the sides of your front, there’s these bony bits here that kind of stick out from the pelvis: Those are the ASIS points (where the red arrows come to in the diagram on the right below).

Sometimes the ASIS points can be a little bit tricky to find, so I’m going to give you a whole set of clues to help you figure out where they are.

ASIS Clue #1: The ASIS Points are on the front outer corner of the torso.

What I mean by that is, they’re not going to be where I’ve got the little red crosses on the figure below. The cross furthest to the left is too far out and the other two are too far in.

For the ASIS points, we’re looking for points out on the edges on the sides of
the front of the person but before you get to the side plane of the person.

ASIS Clue #2: Follow the diagonals from the crotch up to find the ASIS points

To work out how high up the ASIS points are, follow the diagonals from the crotch up – they’re going to direct us up to those ASIS points.

ASIS Clue #3: Look for the obliques

What is the pelvis doing? Can we figure that out? So if the person has their pelvis shifted to one side,  it’s often going to rotate with it that way. That might help us to figure out what overall angle we expect the ASIS points to be on. 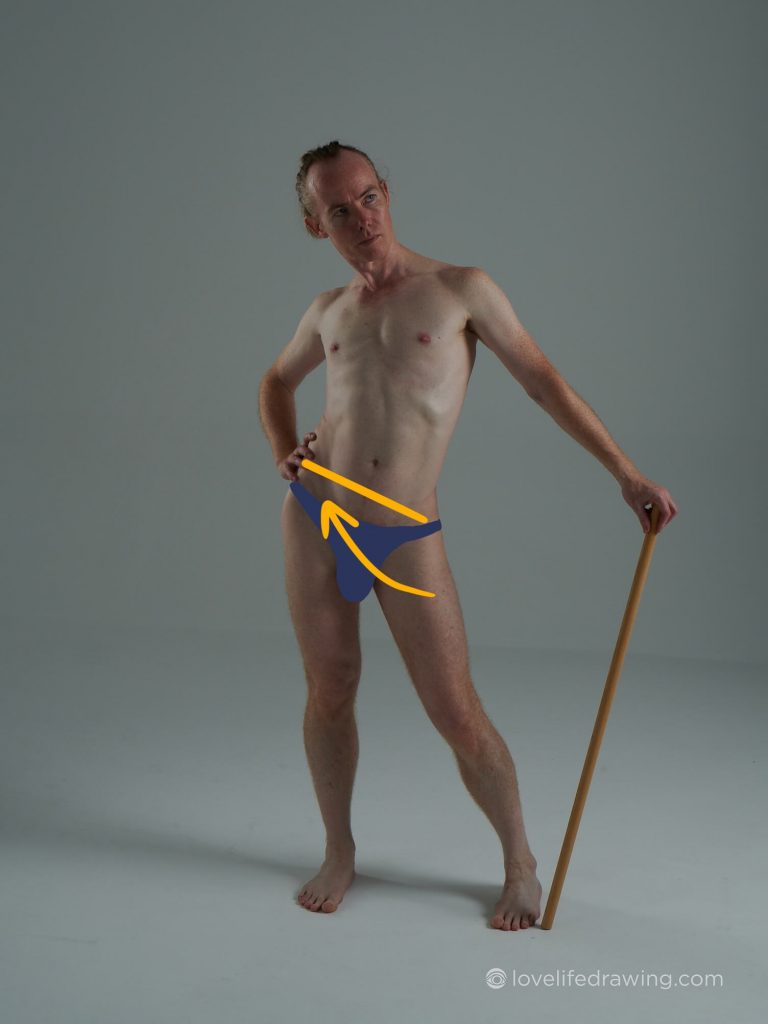 ASIS Clue #5: Look for the angle of the centre line

Another thing we can check is the line from the crotch going up towards the belly button, going up the middle of the torso. What angle is that on? That is going to tell us the overall angle of the pelvis and we would expect the ASIS points to be roughly perpendicular to that line, like in the example below. 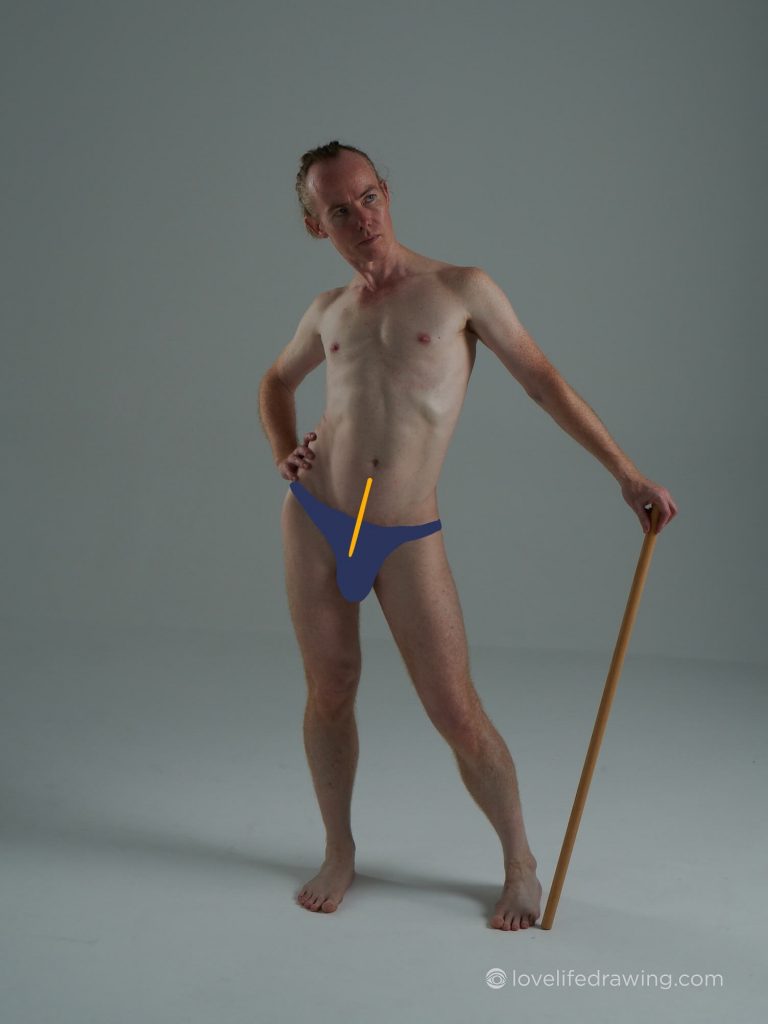 ASIS Clue #6: Look at the tops of the thighs 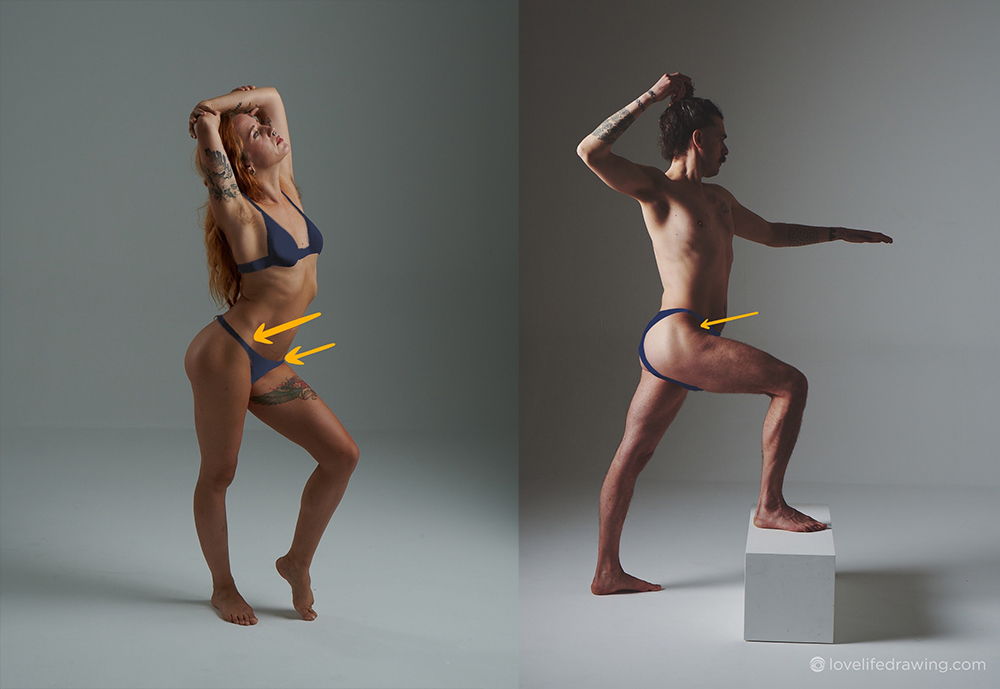 A final tip for pelvis angle: how do we find the angle from the back?

I think it’s actually a bit easier to find the ASIS points from the back. So you still have those love handles bulging out as your first clue and the butt crack will give you an idea
of the overall angle too. Plus, very often you’ll see that at the top of that butt crack, there will be these two dots from the sacrum. Those dots will give you the angle of the overall pelvis. 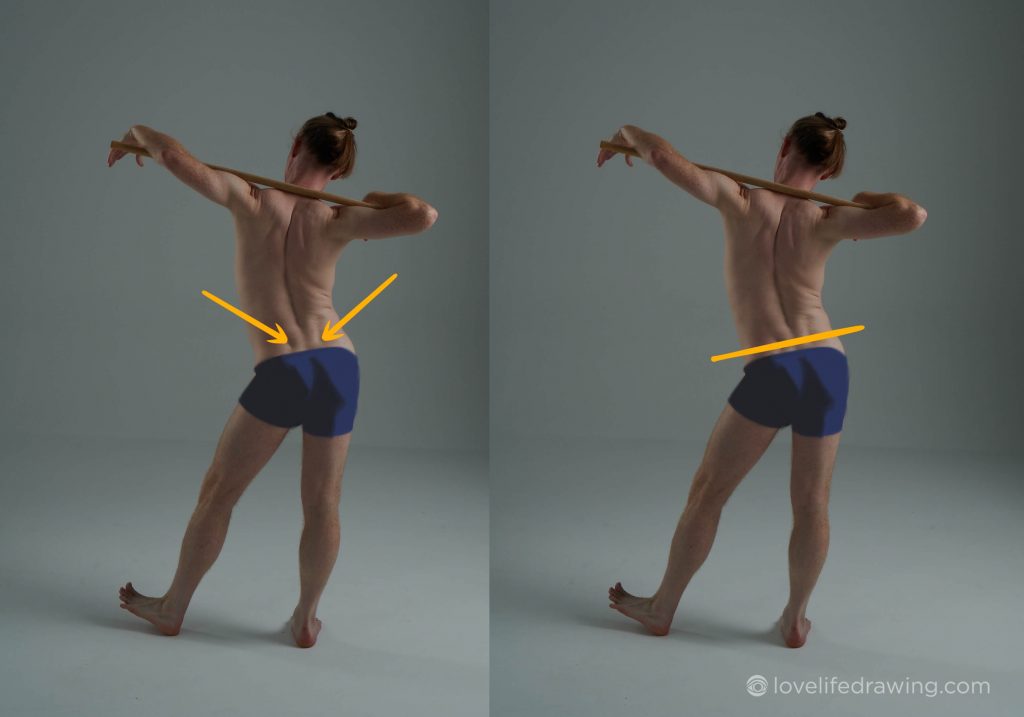 And what’s really nice is that the tilt of the pelvis is often the opposite to the overall tilt back of the ribcage. And so what we get is this really nice shape where there’s a big stretch in the front body and a little bit more of an angle change at the back. As we know from our gesture tutorial, that kind of squash and stretch is really nice for figure drawing. 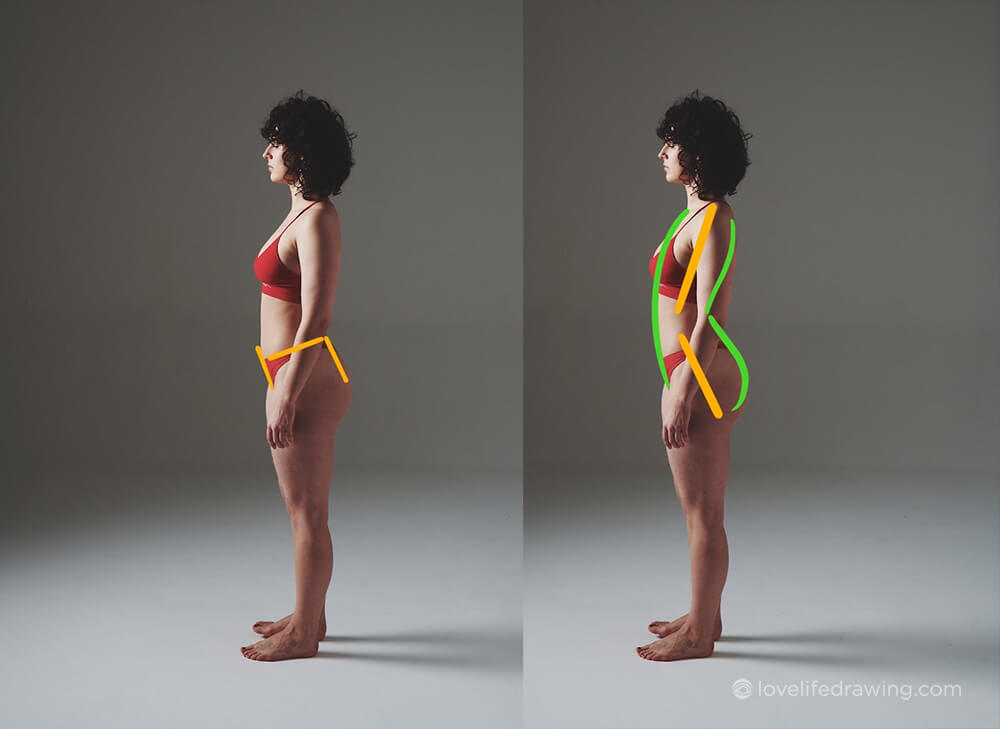 Check the rotation of the pelvis to your eyes 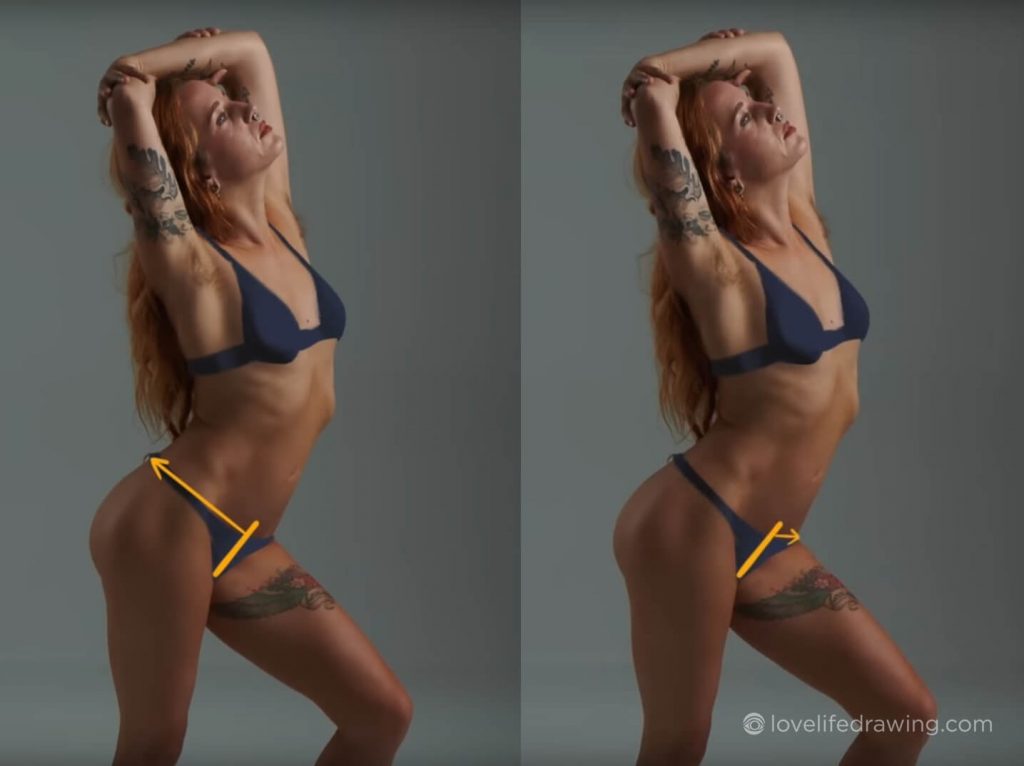 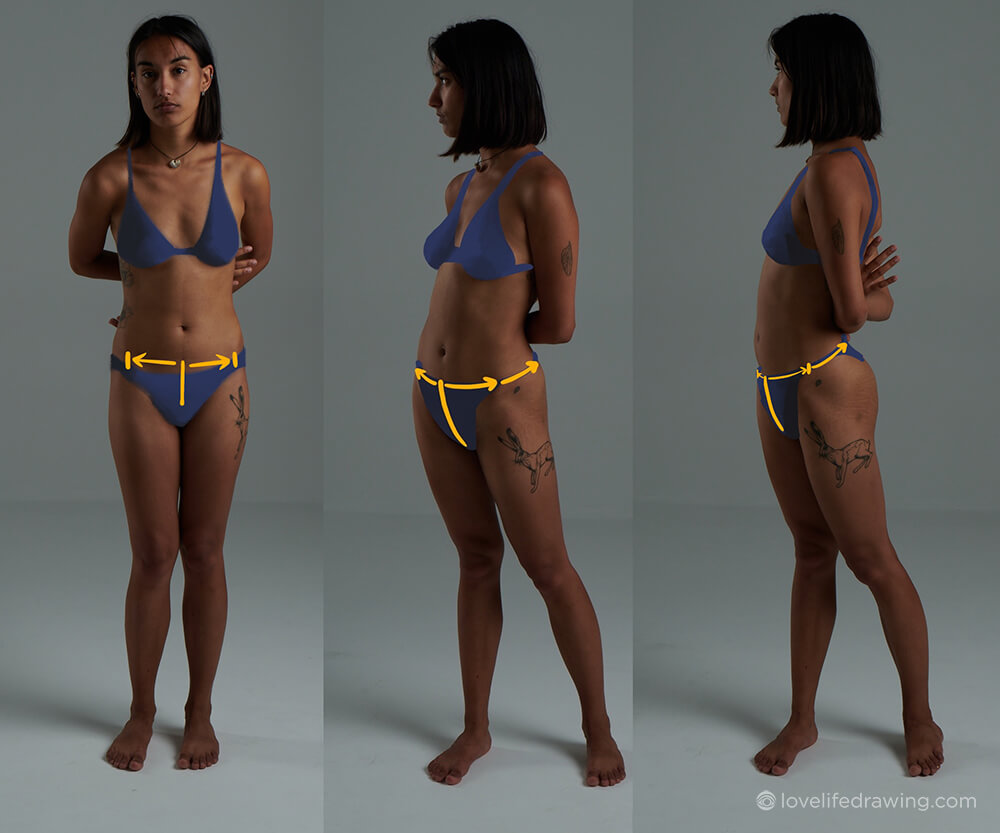 Remember the pelvis is a rigid mass

So now I understand how the pelvis is oriented in 3D space. I know its angle, I know its tilt,
and how it’s rotated relative to my eyes. If it was a simple box shape, I could draw that box. I know everything I need to know about it. And that’s actually something that a lot of people do. They just draw it as a box shape to get started.

The top edge is across the ASIS points and then you figure out how it’s tilted to project the rest of the box out from there. You can figure out how much of the side plane you can see versus the front of the box because we know how it’s rotated to our eyes. 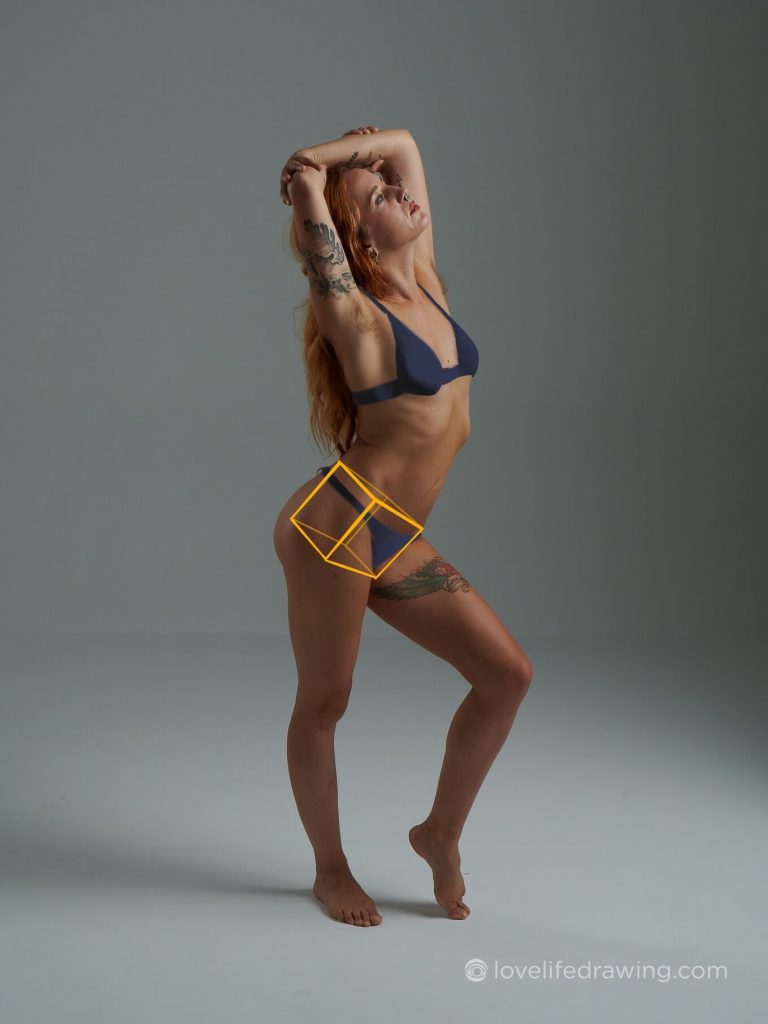 A box is actually a really nice way of starting to draw the pelvis area.  But I personally prefer the ‘pelvis pants’.

So, the pelvis pants is something that we learn in our Fresh Eyes Challenge, which is a great way to learn about the basics of figure anatomy. It gives us a really simple 3D shape which really maps to what we can actually see. It helps us draw the angle, the tilt, the rotation, and we can build our anatomy onto it pretty easily. 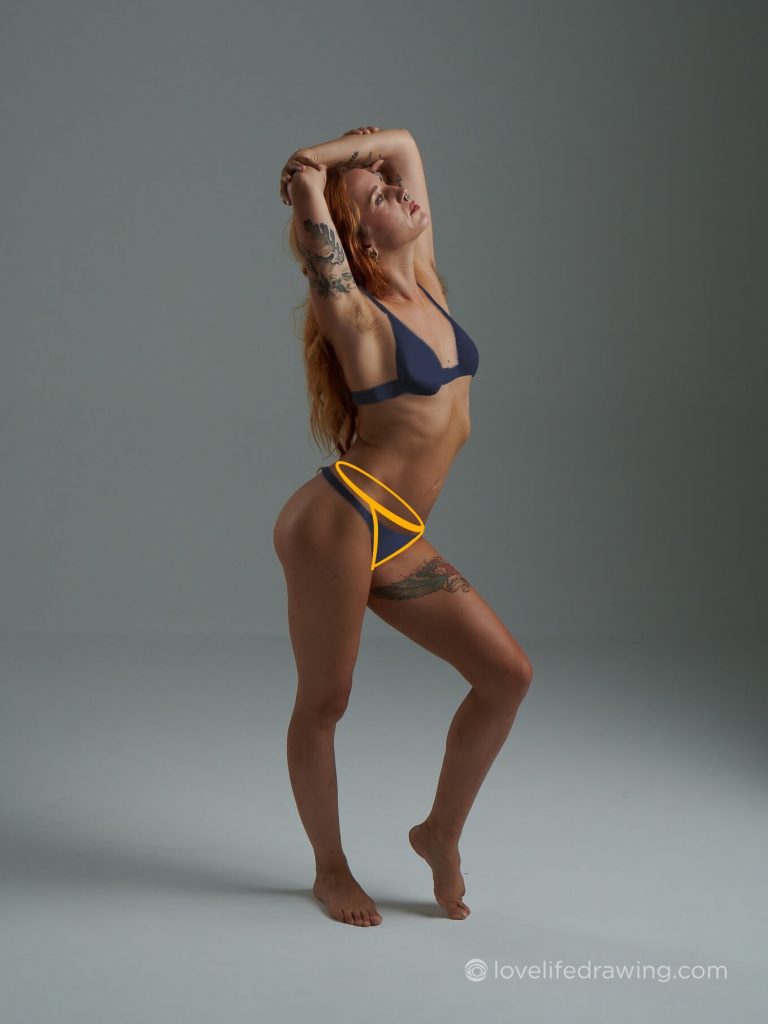 Whatever way you choose to visualise and draw this pelvis area, the point is that the pelvis is a rigid mass. It’s not bendy.

The angle across the hips and the ASIS point and the tops of the thighs have all got to move together.  If I’m looking from the back, the sacrum dots give me the angle of the pelvis; the bulges of the external obliques which are above the pelvis, need to be on that angle too. And the bottom of the butt needs to make sense with the overall angle of it. 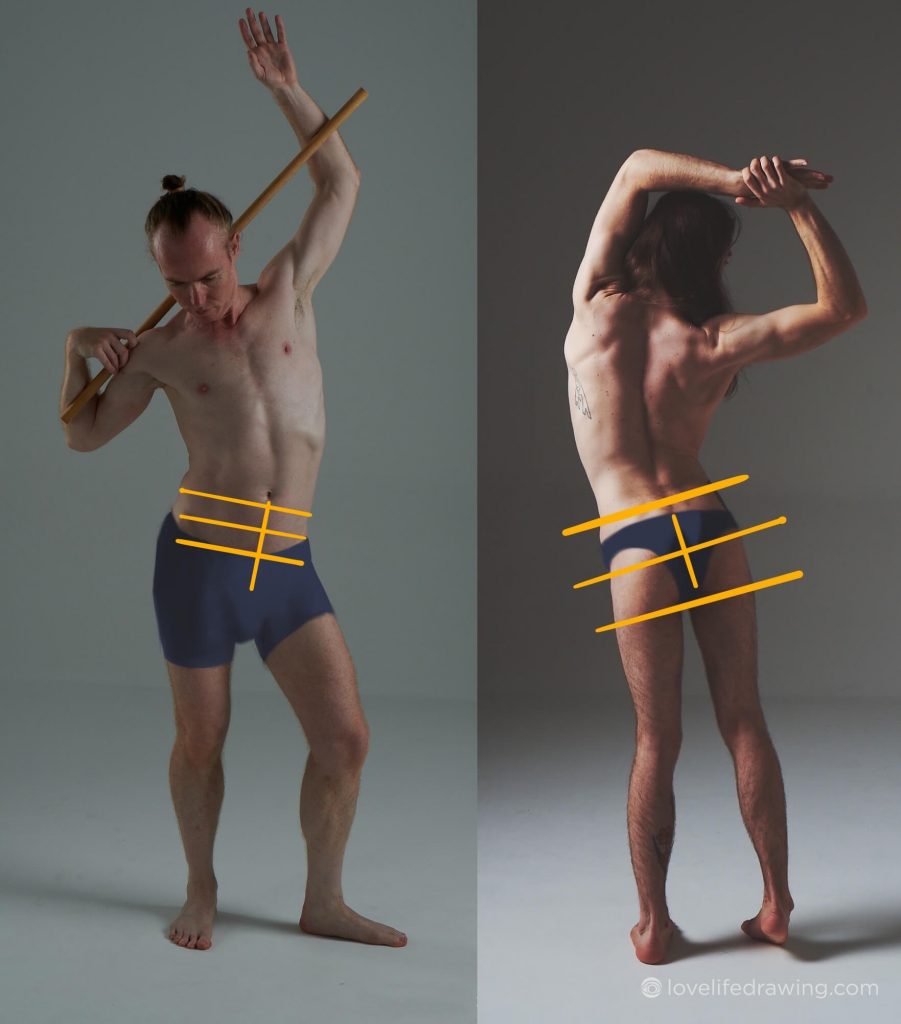 Now what really matters is not so much the pelvis itself but how the pelvis relates to the ribcage.

In this lesson, we used a really simple way of simplifying the ribcage into a simple egg shape. Now  we’ve figured out how to find those ASIS points and stuff like the pelvis pants. If we’ve got the
pelvis pants and the ribcage egg related properly, we’ll see an angle change and therefore then we can squash and stretch the midsection between these two rigid masses. Through this, we’ve figured out probably the most important idea in all of figure drawing. We have done more for our figure drawing than we would have done if we’d read and memorised an entire anatomy book. This is the heart of gesture. It’s also the heart of the forms and the heart of the structure. 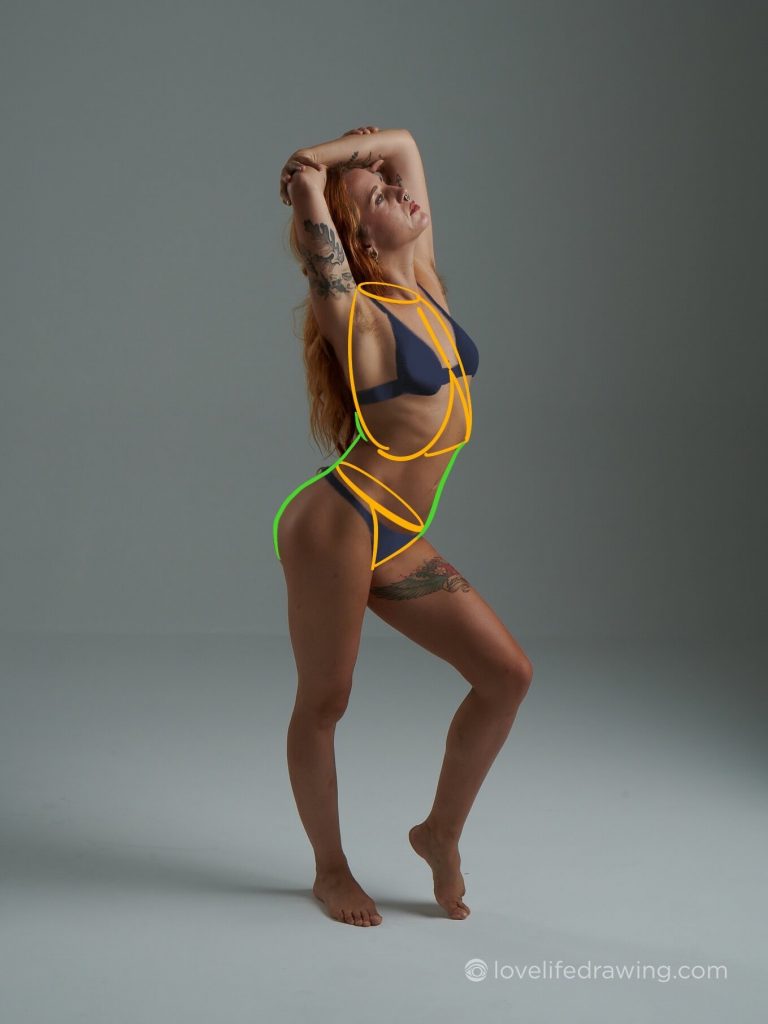 A couple of extra things to note 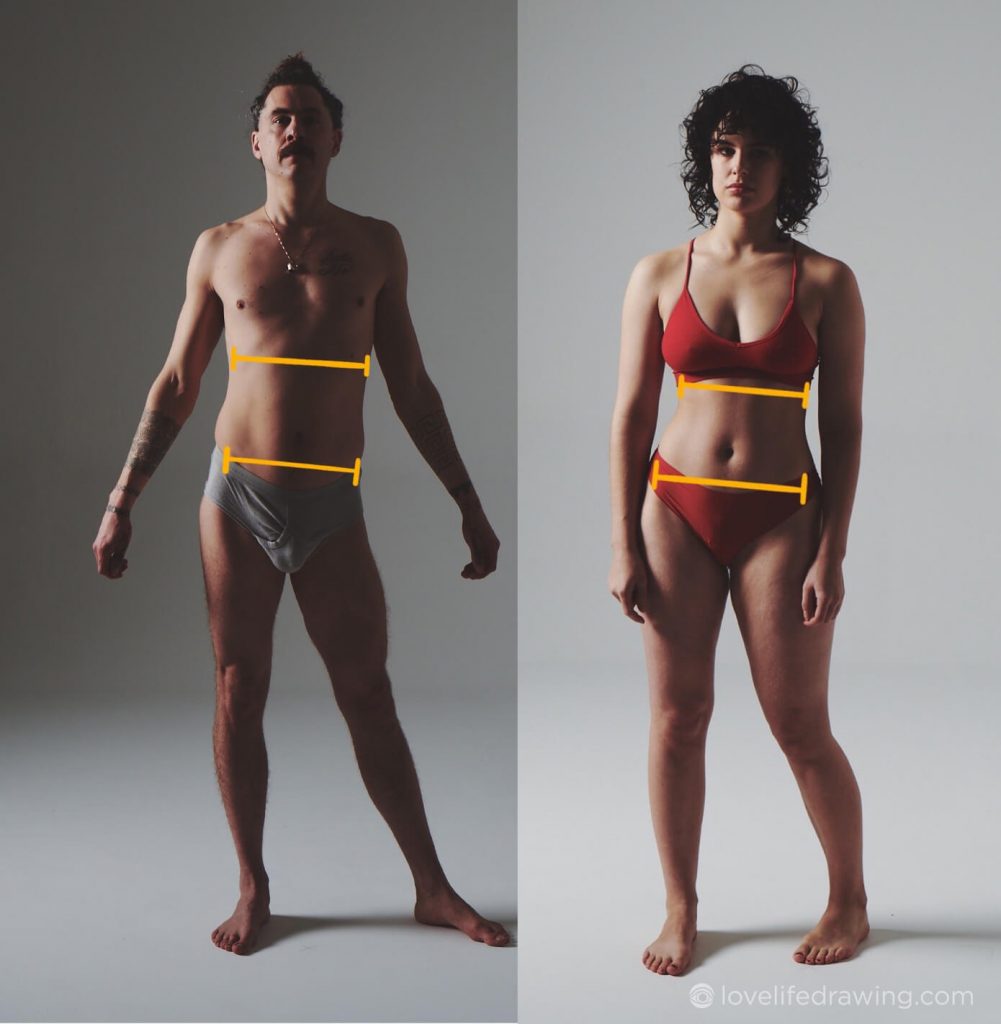 Another useful common difference between male and female figures is that the obliques, which are just above the pelvis (the ones that bulge out above the pelvis). They might have some fat on them and they create those love handle shapes. That bulge is often going to be more prominent on male figures.

So often we’re going to see the outline come back in for the top of the pelvis on a male figure, whereas on the female figure that often gets smoothed out so that it doesn’t come back in in the same way. It tends to be a smoother curve all the way down from the waist and around the side of the hips.

So that’s it for today! I really hope that you’ve been enjoying this new anatomy series! For more advice on learning anatomy, I’d recommend checking out this article, or trying out our free Fresh Eyes drawing challenge here. 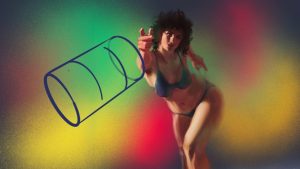 It’s so easy to make the figure feel flat like it’s not three-dimensional. Why is that? Because the drawing surface is flat! The drawing is