Learning from Egon Schiele – How to Develop your own Style

We’re going to learn by copying an Egon Schiele painting today. The main takeaway is going to be about style. If you’ve ever thought about how you might develop your own distinctive style, this video / article will have some insights for you.

When you see a painting that has some power or character that you can’t quite put your finger on, you can absorb some its strength by copying it. That’s what Mayko did with this painting by Egon Schiele. She wrote down what she learned from the experience so that we can learn from Schiele too. 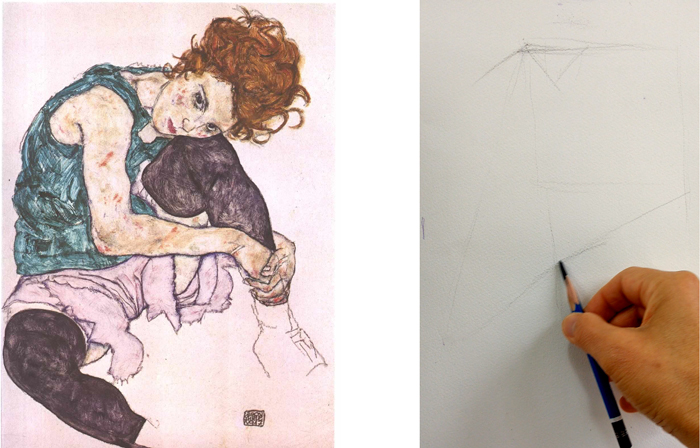 You’d be forgiven for seeing some elements of the painting as a bit crude. The lines are a little rough and bumpy, and the textures of the skin and clothing are quite rough. The colours are quite simple. Despite all that, the painting is really powerful, full of life and character.

You can see similar attributes in some of his other paintings. They are not polished, highly rendered works with nuanced tones. They are raw and bold, but at the same time, they are very natural and human. How did he do that? 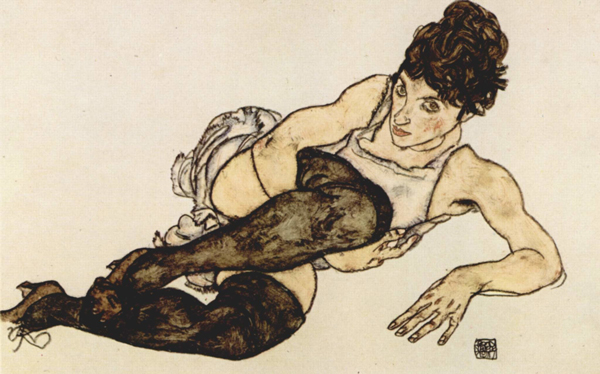 A foundation of technical skill

The first thing to note is that Schiele was highly trained and had a firm grasp of traditional life drawing skills. He did thousands of figure drawings in his career. So behind this painting, there’s plenty of technical ability and experience. He has gone down the path of practice and acquiring technical ability all the way to the point where those skills are second nature. So he could forget those concerns and instead focus on injecting the image with energy and emotion. 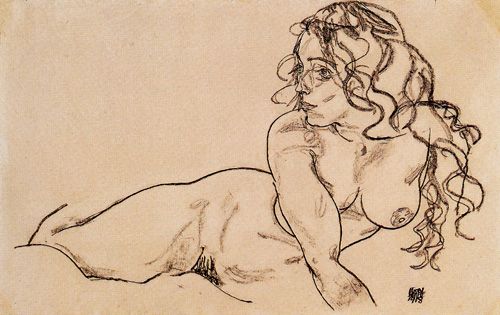 While Mayko was studying Schiele, she started to notice a lot of geometric structure to the drawings. The first thing that she said to me when she started was ‘there are a lot of triangles’.

So in this painting, she focused on those triangles, and on the vertical and horizontal lines that she felt gave this painting a solid framework, a scaffolding, on which Schiele built up his more raw and emotional painting. She said:

Her right shoulder, right knee and the left hand make a big triangle. Adding 2 points – the top of the head & the right elbow – you get a rectangle, which forms a kind of kite shape with the triangle. Marking these shapes very lightly gave me a kind of scaffolding before I started the proper drawing. 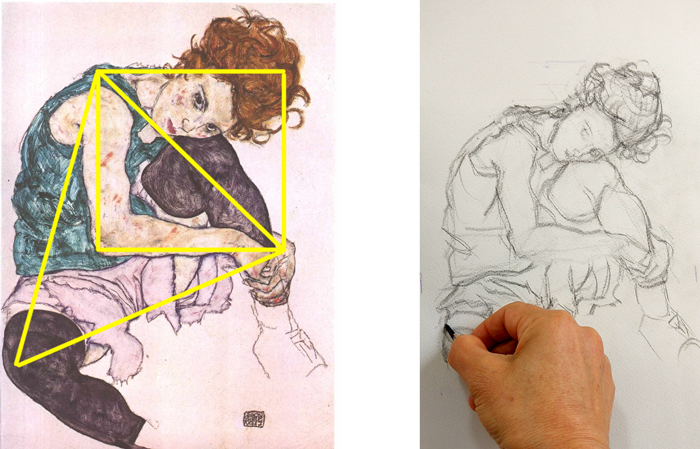 So he has plenty of skill and knowledge to observe and make marks, he has compositions with solid structures in place. How did he then build this expressive painting on top of all that?

Firstly, he drew and painted fearlessly. He didn’t care if mistakes were made, he’d happily discard failed paintings and start again. Often as learners we fear doing things ‘incorrectly’, so we are careful with our lines and when we make mistakes we try to correct them. That approach is too burdened with analysis and anxiety to allow expression to come through, so Schiele worked more spontaneously. There was nothing tentative in his process.

He liked contour drawing – focusing on lines and not much on tones or light and dark. So he was spontaneous and worked with lines, but his drawings don’t have the flowing feel of a traditional gesture drawing. He wasn’t going for the rhythmic feeling of movement we often talk about in gestural drawings. His work is filled with harsh angles, giving the figures an awkward and sometimes even grotesque feeling. 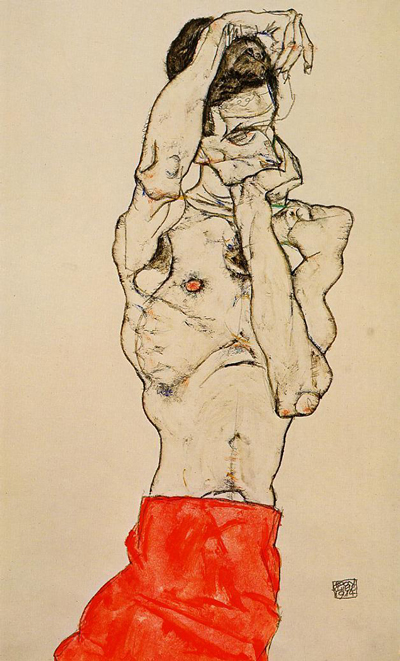 If you look at the drawings carefully, Schiele’s anatomy is really good. It’s just that it’s been exaggerated, to give an almost caricatured feel. The hands are beautifully drawn, the ribcage has lots of volume, this elbow is spot on, and the twist in this forearm is exaggerated to help give that contorted and awkward feeling. 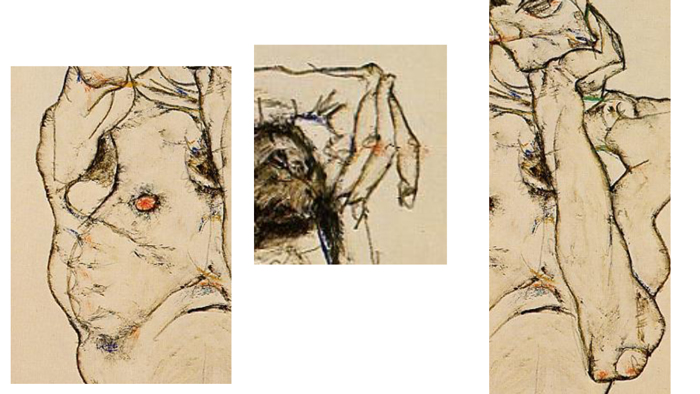 He often did foreshortened poses, which would help create a lot of those geometric shapes we talked about before. He demonstrated a great ability with perspective.

So the formula for this distinctive and very expressive style is a base of skill and knowledge of the basics – perspective, anatomy and so on can form the foundation of a style. These things take a ton of time and practise, so there’s no rush. On top of that foundation, you can then build something more expressive and raw that comes from within you. You’ll need guts, to draw without fear. Emphasise the visual elements that you feel most strongly about in the figure, and without worrying or over-analysing, draw and paint from the heart. 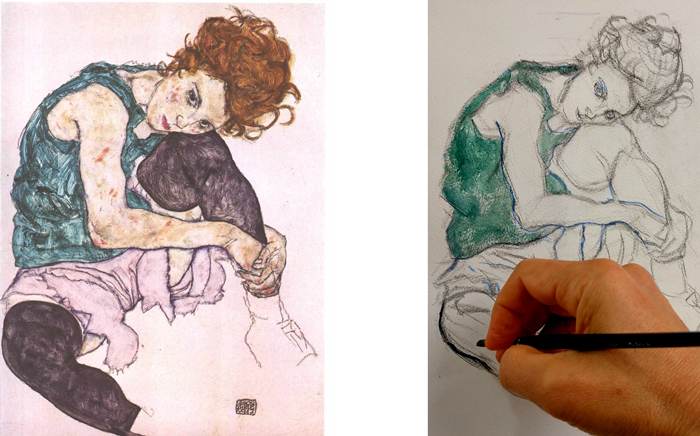 A few other notes

Mayko felt that the paper Schiele used was important to achieve the effects he did. Apparently he often used Japanese paper. She also thought he would have used dry brush techniques to get those rough marks creating these textures. 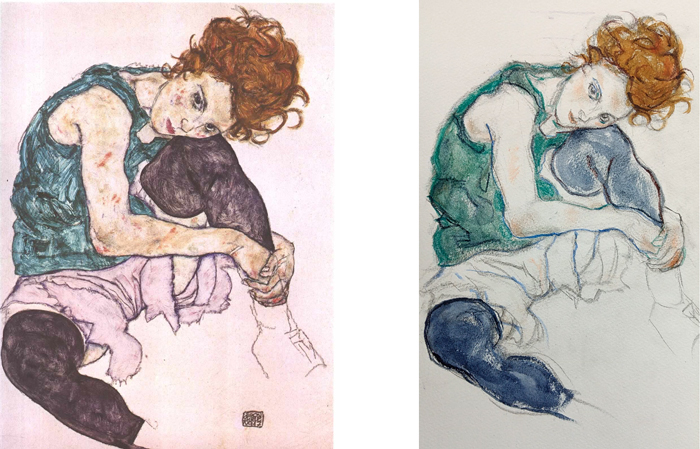 We’ve put together a FREE ten-day challenge called Fresh Eyes, which is specially designed to help transform the way you see the figure. Signing up will also give you access to our reference library, which has hundreds of high quality life drawing reference images for you to practice your drawing with.