It is useful to see the big picture and the various things that we have to learn to be able to draw (and that it isn’t as overwhelming as it sometimes feels!). The above is a video that aims to capture all the skills that matter in drawing in 10 minutes. It is also laid out below as a written article.

Most drawings out there in the world are actually symbols, like the eye symbol below. We learn a lot of these symbols when we are kids. Designing cool symbols is an artform in itself, symbols are part of art.

However, if you want to draw with any sort of realism, create figurative art, landscapes, do illustration, or create comics or cartoons or animations or games, you will need to move past drawing symbols.

Unfortunately, our brain’s love of symbols can distort our drawings. This is probably the biggest factor in making drawing hard to learn, it affects even experienced artists, and it takes continued effort and work to address it.

Drawing what you see means you draw the actual shapes your eyes observe without distortion from your brain and its symbols.

There are lots of ways to do this. There’s a famous book called ‘Drawing on the Right Side of the Brain’ which is all about this (which I’m not necessarily recommending by the way). One example that the book suggests is to turn the reference upside down, and try to see it as a bunch of abstract shapes. 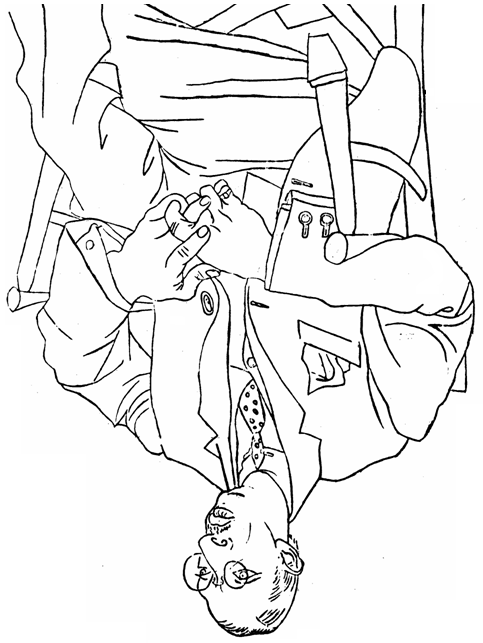 I made up an exercise that really works for this too, and I personally think is more useful since it’s closer to what you do when drawing, where you first turn the reference into abstract shapes and then focus on drawing those, which you can read HERE: 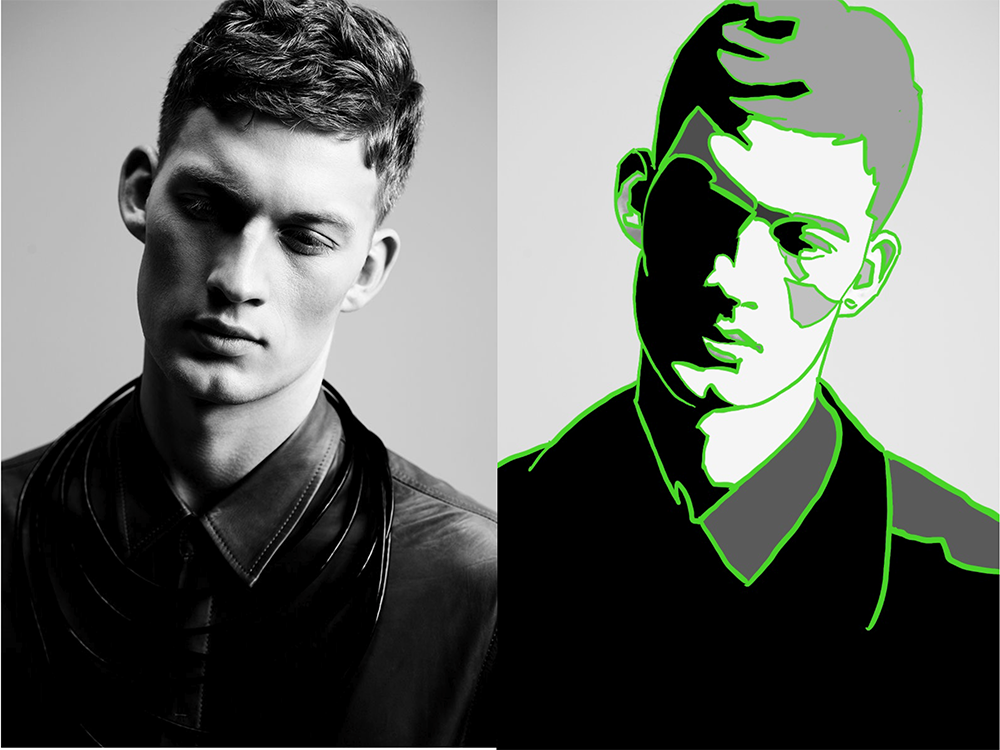 You can also sort of force your drawing to be based on what you see by using methods like measuring. You check the relative sizes of things you see, and you put those relative sizes on the paper as you draw, to ensure things are true to your observations. I’ll be honest – sometimes this feels tedious and makes drawing feel like geometry homework, but it’s really useful and the good news is with experience, you’ll need it less and less, maybe not at all. 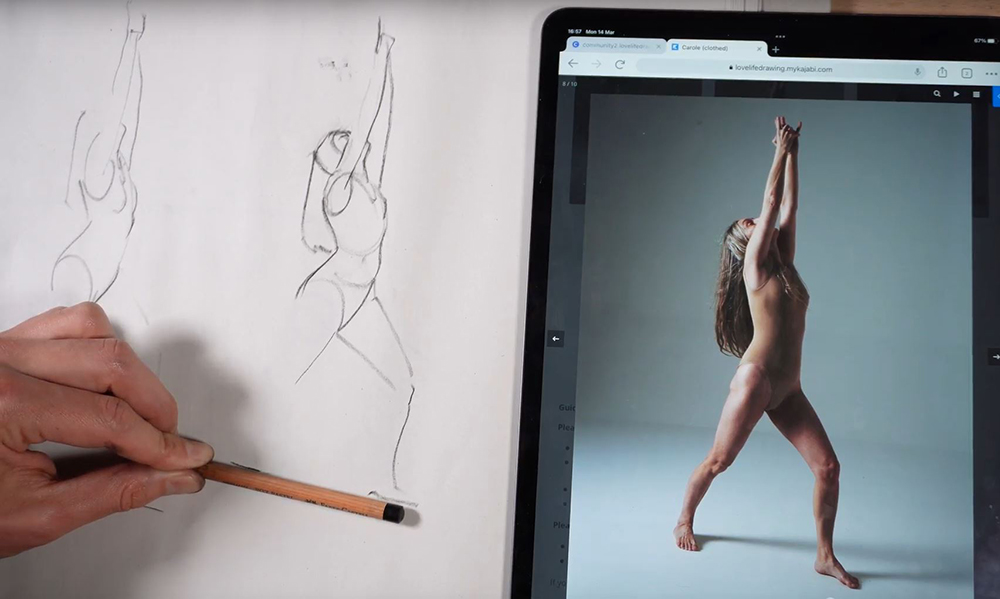 You can do that with angles too – hold up your pencil to the angle you see, and then to your drawing. You can also use alignments, checking what lines up horizontally and vertically.

A lot of people advocate for contour drawing, where you connect eye and arm and try to draw the outlines as your eye scans over them. There’s also Grid drawing. Some artists like to put a grid on the reference and then have a grid on the paper. Then instead of drawing the whole thing, you copy each square. This keeps the symbols out, because now you have a bunch of little abstract squares to draw. 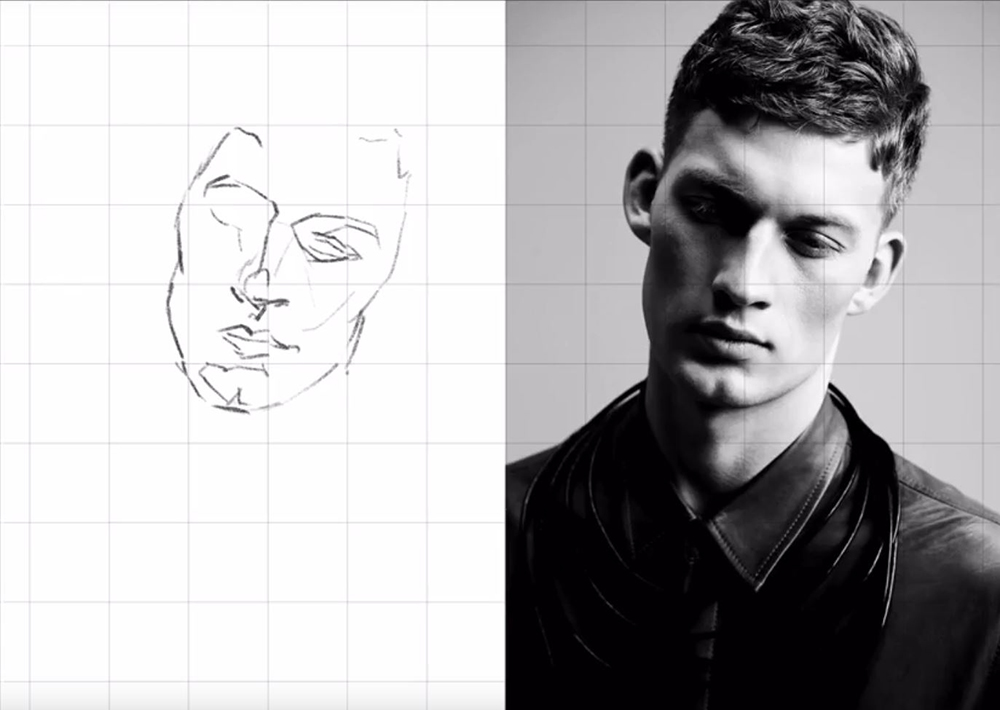 My personal opinion on all that is I don’t want to use tons of painstaking measurements, or use a grid. I think contour drawing can be useful but can also get you hooked on little details. So within this category called observational skills, I focus on learning to see big simple abstract shapes and not symbols, learning to measure proportions and angles and alignments when I need to, because I can combine those skills with other skills we will look at in this article.

What we have talked about so far is really flattening what we see into 2D shapes, and learning to draw those shapes. However, you can think in 3D even as you draw on a 2D surface. Crucial to that is perspective.

I notice a lot of people instantly close their minds to it. But it isn’t just a boring technical exercise, it can help make your artwork feel more relatable, so it’s meaningful, even though the study of it is boring. Perspective is not just for drawing machines and futuristic cars. Here are a few areas of perspective to focus on: 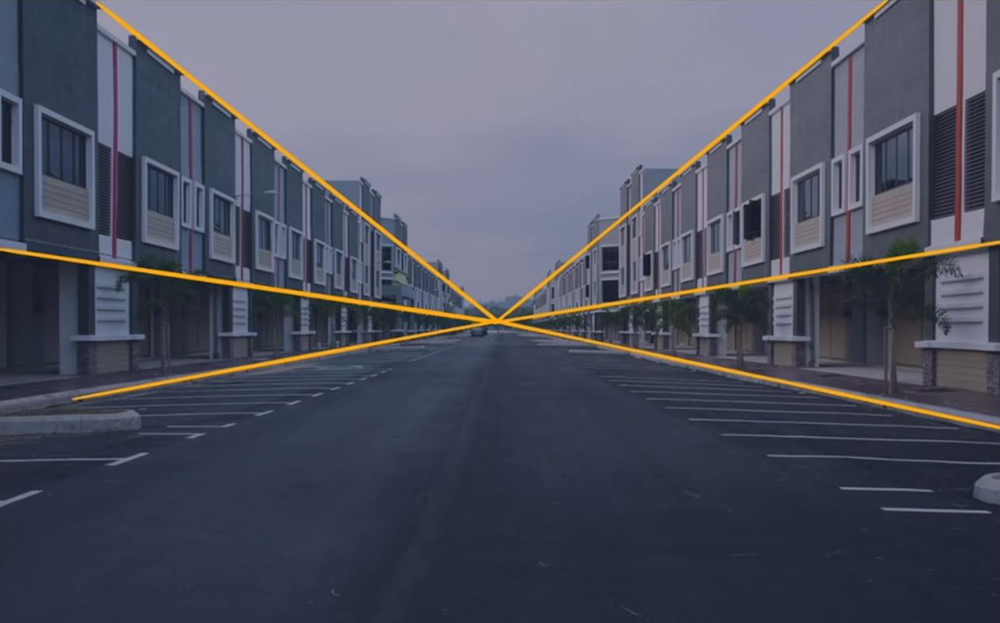 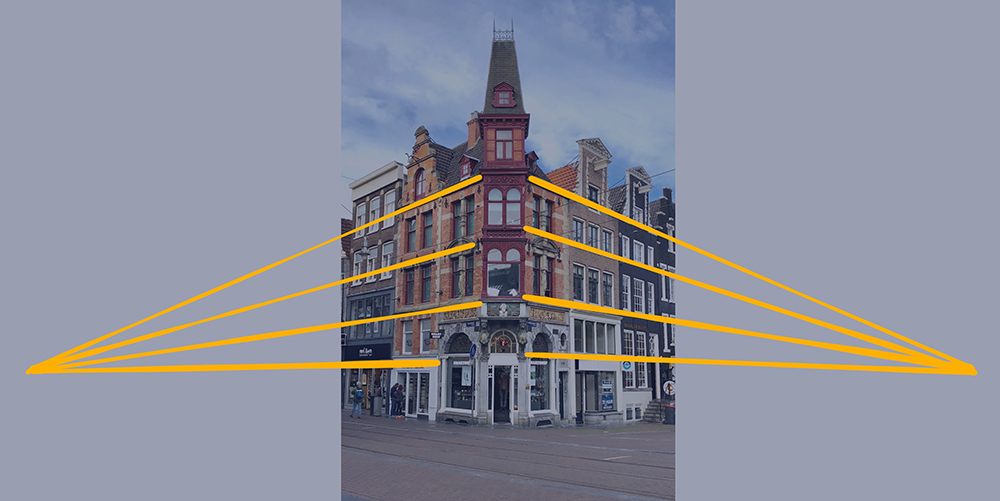 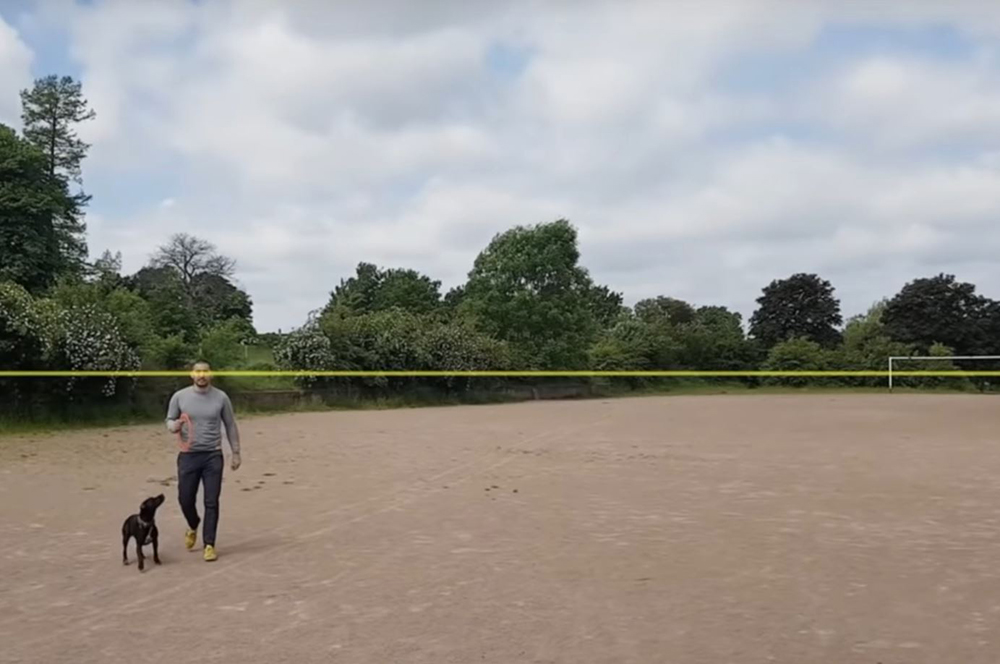 In the image below, Jared Cullum has drawn the buildings with proper perspective, but also the characters too: 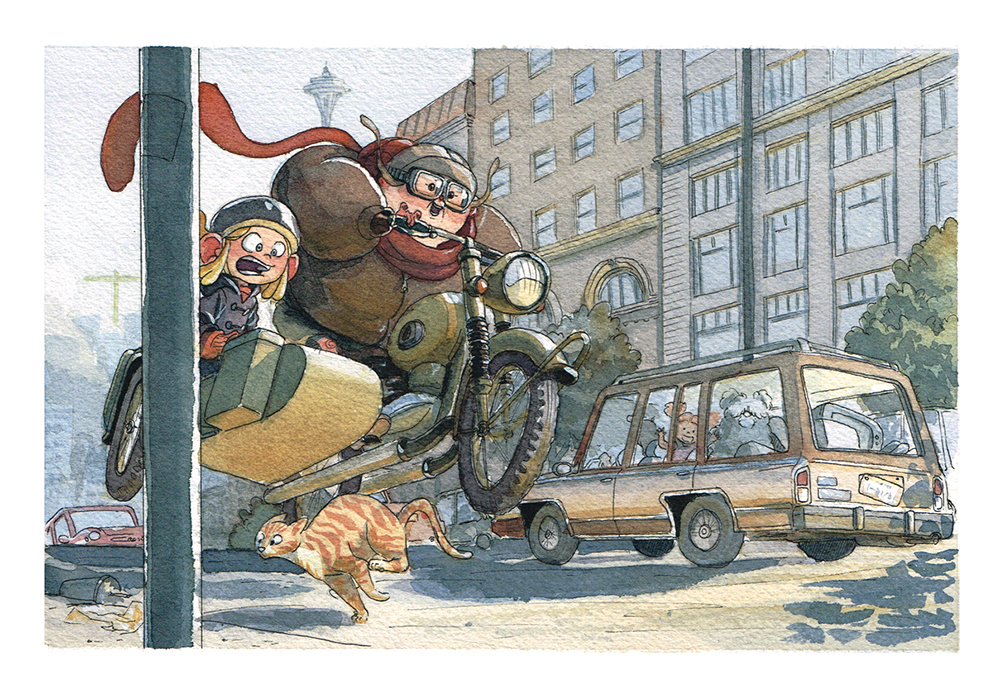 Now check out this screenshot from ‘Song of the Sea’. The perspective is way off, but the scene is still appealing. So I’m not saying be a slave to perspective rules. In order to break the rules successfully like this though, I believe you need to learn and get good with those rules first. Because they are only being broken in very selective and thought through ways: 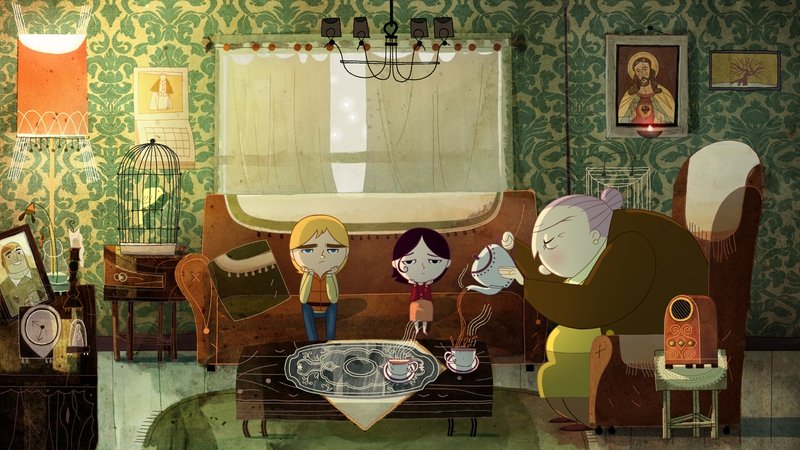 You’ve probably seen people drawing with boxes and cylinders and stuff before. Maybe you love it, maybe you hate it, like Marmite. I used to hate marmite but now I love it. People can change!

I also hated drawing with boxes and cylinders. Now, I tolerate it because it’s worth it. I don’t love it, but i love creating pictures I’m proud of and it’s really helpful for that. 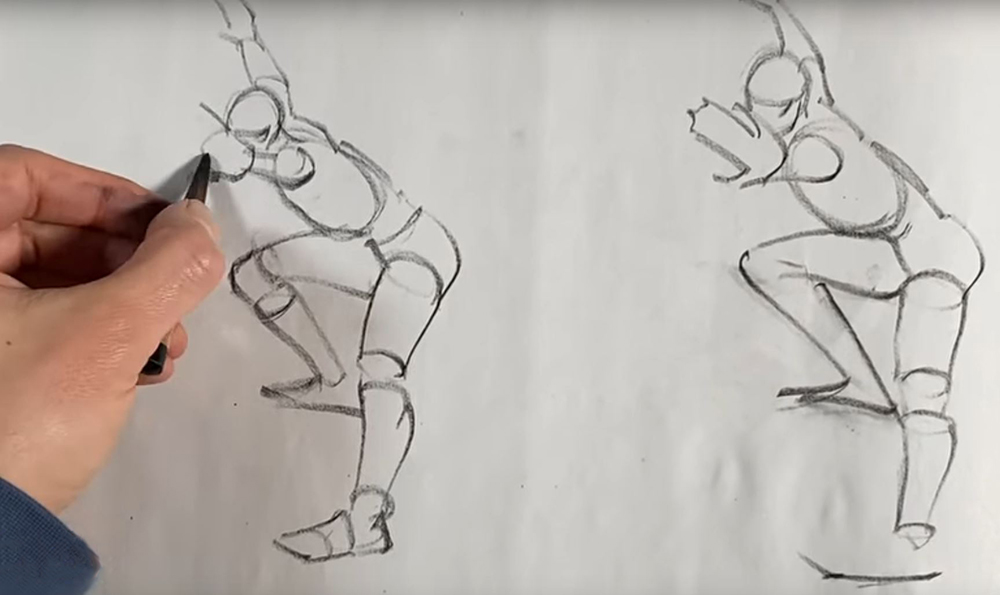 How can you do this when some stuff just isn’t a box or a cylinder or a sphere? You have to learn to cut through a lot of extra bumps and bits to get to the underlying box or cylinder or whatever. It’s easiest to start with household objects which are already quite like a box or a cylinder. It is much harder applying simple forms to organic objects like a human figure.

Cross contour lines, surface lines, wrapping lines go around the forms, and by drawing them you are clearly showing how the form runs. These are a more intuitive way to bring form, easier to apply to organic forms, and one of the most useful skills in figure drawing. Are you practising with these? You can read more about them HERE. 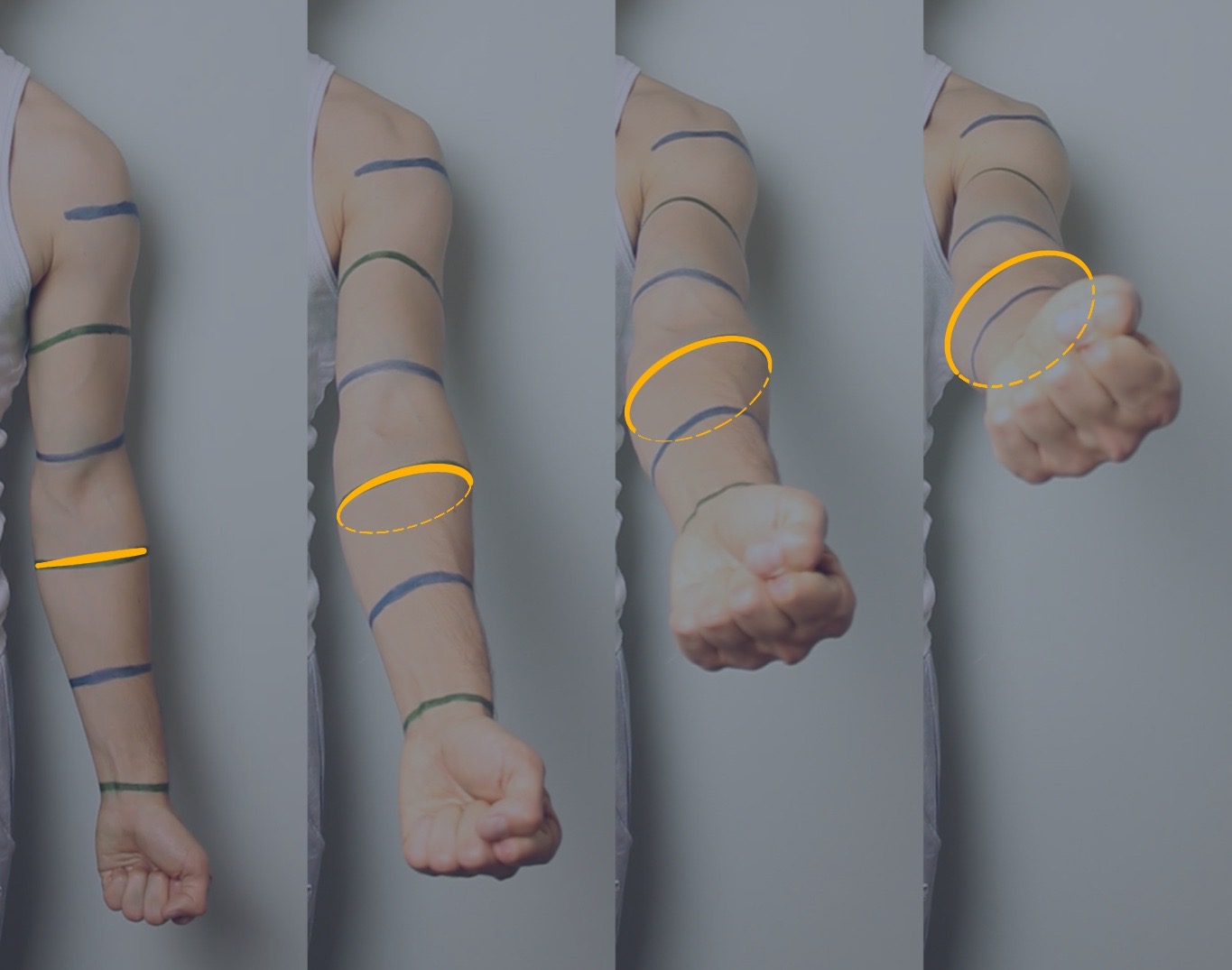 Foreshortening happens as plane turns away from you: that plane appears shorter. You might think of this as a foreshortened arm, like in the image above. But just the length of the arm is appearing shorter, that shape going around the arm got wider.

You doing ok? Too fast? Well tough we’ve only got a few minutes left and we haven’t even talked about values. I’m not panicking, you’re panicking!

Values is how light or how dark something is. It could be because its colour is dark, or because there’s not much light hitting it that it’s dark, or both. Now colour is nice and everything, but it’s value that really does the work in a picture, which is why black and white photos and movies still work, and you can draw without colour and it still works too. 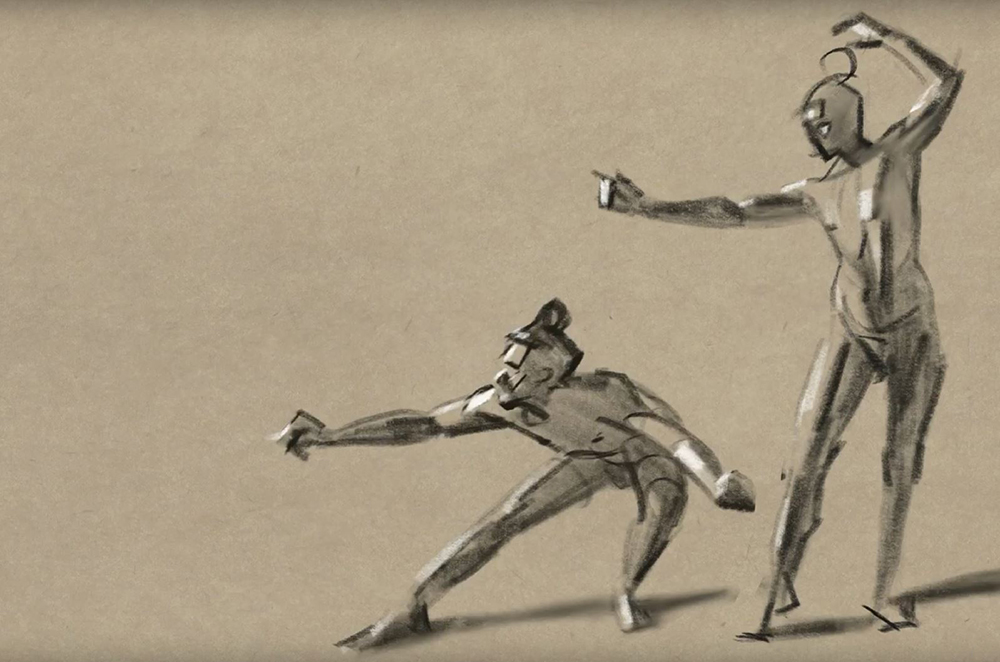 The key skill with values is learning to simplify away little variations to capture the big simple shapes like we did earlier. Unfortunately, our brains like to tune in to little variations, so it’s really hard to simplify them away, because our brains are screaming at us that they are stronger than they are. It’s called the simultaneous contrast illusion, I have a video on it HERE. Stupid brains. 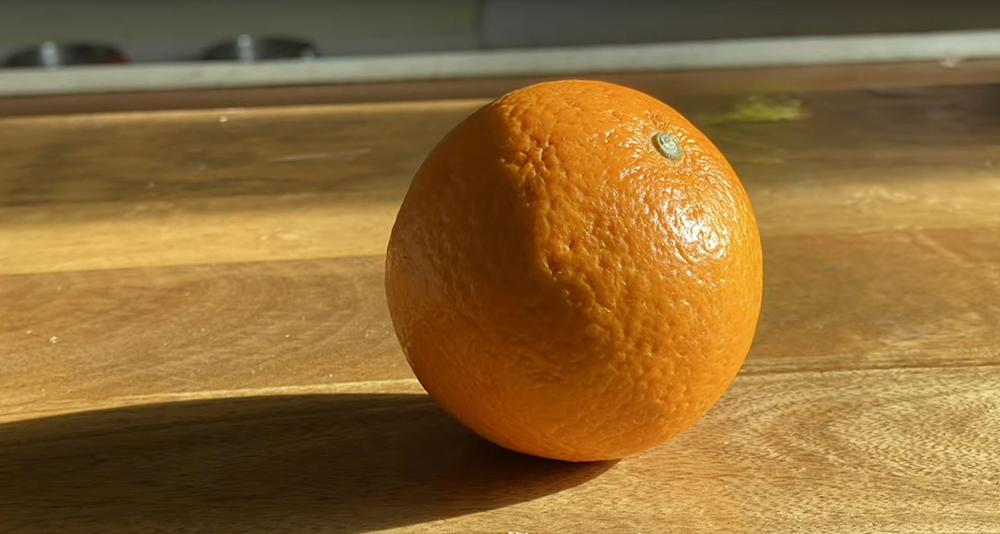 You can watch our videoon the basis of light and shadow HERE, but below is a basic breakdown of the key aspects: 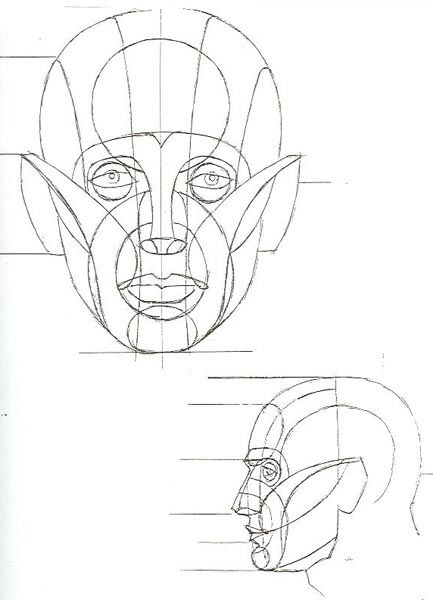 So far, we have really been thinking about what we are seeing and how to interpret, simplify it and design something cool. We haven’t really talked about how you then make marks on the paper to create the actual drawing.

You can use lines to define the outlines you see, the shapes of the light and the dark we talked about, the lines of convergence to the vanishing point, the cross contour lines – all of that.

To make those lines, it’s a good idea to learn to use your whole arm and shoulder, rather than just your wrist and fingers. That’ll eventually create more confident and appealing lines. 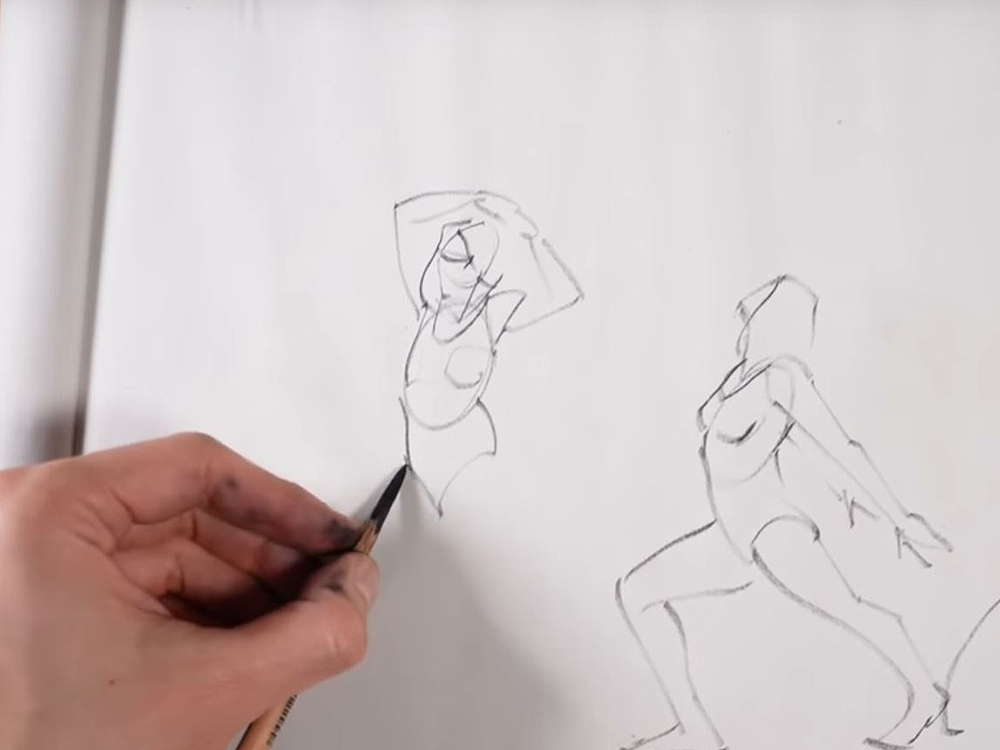 Some materials let you use an overhand grip, which also can help you produce those beautiful lines. You can fill in those areas of shade, maybe with the side of the material. Or you can use hatching which is a dense path of lines that are consistent so that it creates an area of shade. Those hatched lines can be parallel or they could wrap around the surface of the form they are on. You can smudge the material to create an even area of shade, although I personally would recommend not using smudging too much early on. Stick to clearly defined marks.

All the other skills are kind of in service to your design and composition skills. These are what makes drawings, paintings, photographs all sorts of images appealing and interesting. These aren’t specifically drawing skills, plus I don’t have time so I’m going to leave it at that for these.

So that’s everything about learning to draw, just in time. If I missed something, don’t tell me, I don’t want to know. Oh wait! what about gestu…

[Time runs out – click here to learn about gesture!] 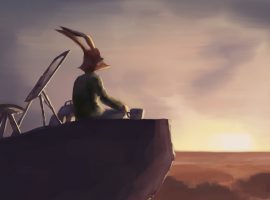 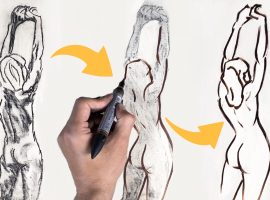 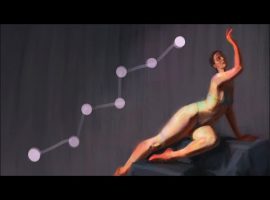