How can we draw like this amazing artist? In this video/article we are going to learn how Lane Brown approaches composition, anatomy & form and more.

We have another video/article about Lane’s approach to light which I’ll link to below, so if you’ve not seen it yet check it out after this one. Lane’s Instagram is @lane.draws. It’s great to have inspiring drawings pop up in your feed and make you want to practise.

We have talked about movement before – a flow in visual elements. The figure will have movement, and we can accentuate that in our drawing, or use the composition to give the drawing its own movement.

The movement of the composition can be a sweeping curve, a straight arrow, a fan shape. 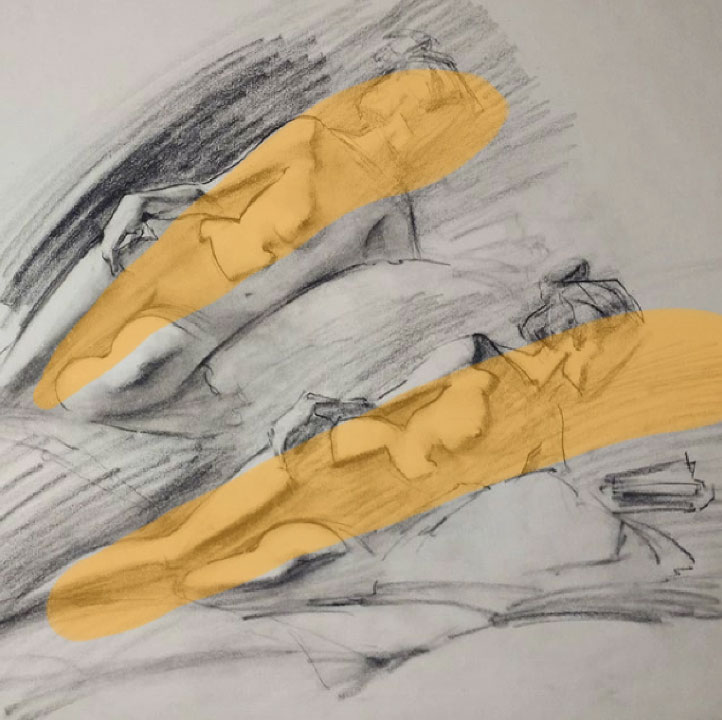 Lane has various tools to build the composition in his drawings, rather than just fitting whatever the model is giving him onto the paper. 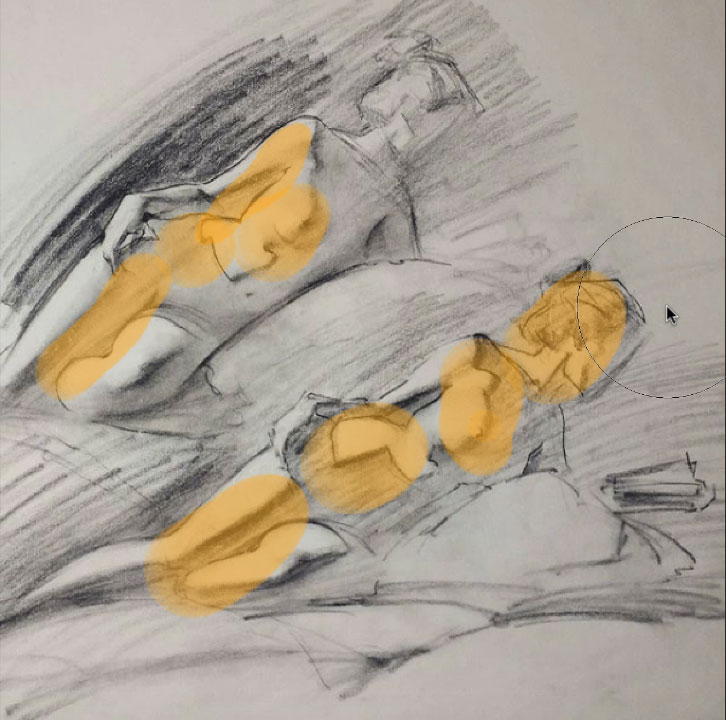 He also is not afraid to add a background to complement the figure. 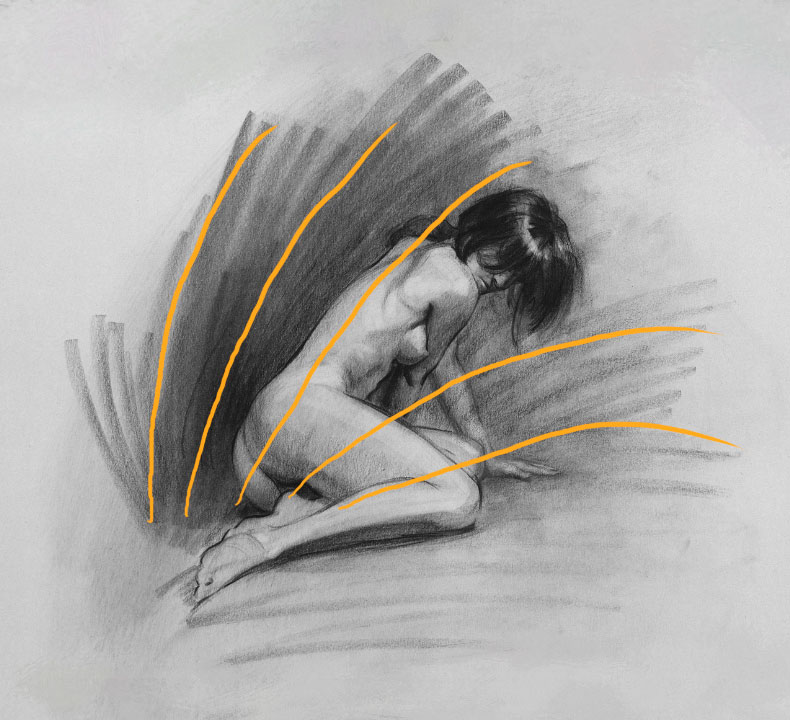 Since the tones in the figure are often flat, he can make the backgrounds textured, with the strokes used to amplify the composition. 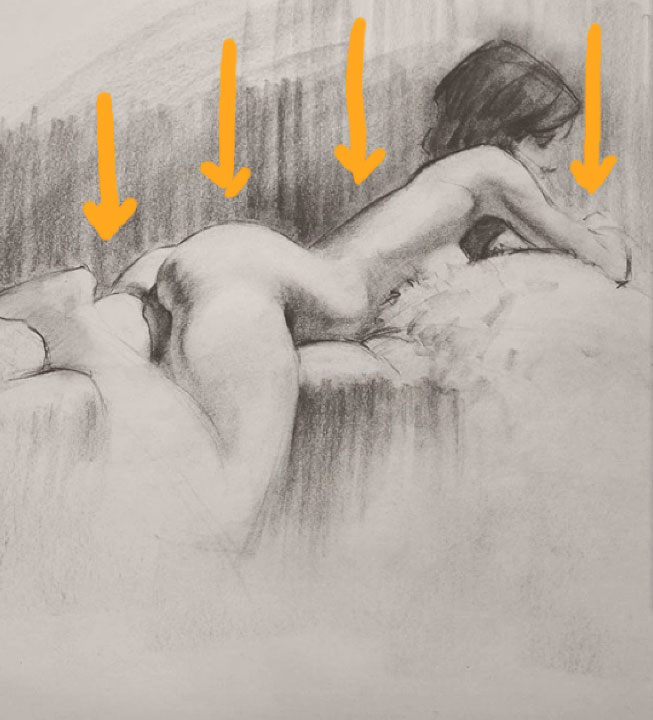 The drawing above has an interesting background. The pose’s movement might imply a curving sweep sideways, but that’s not what the pose is about. It’s about rest, about gravity on the bed. So the background’s movement is downward, emphasising that gravity and that makes the pose more restful, rather than dynamic and energised. The curves could appear dynamic, but the pose isn’t, and so Lane has settled the figure with the downward movement in the background, and he isn’t using the background to accentuate the figures curving movement.

Lane explained that to help think in terms of design, you can view the figure in terms of simple abstract shapes of light and dark. In other words, stop seeing a figure, and see a set of simple large light and dark shapes which can be arranged into a design. As we talked about in the other video squinting is useful for this. 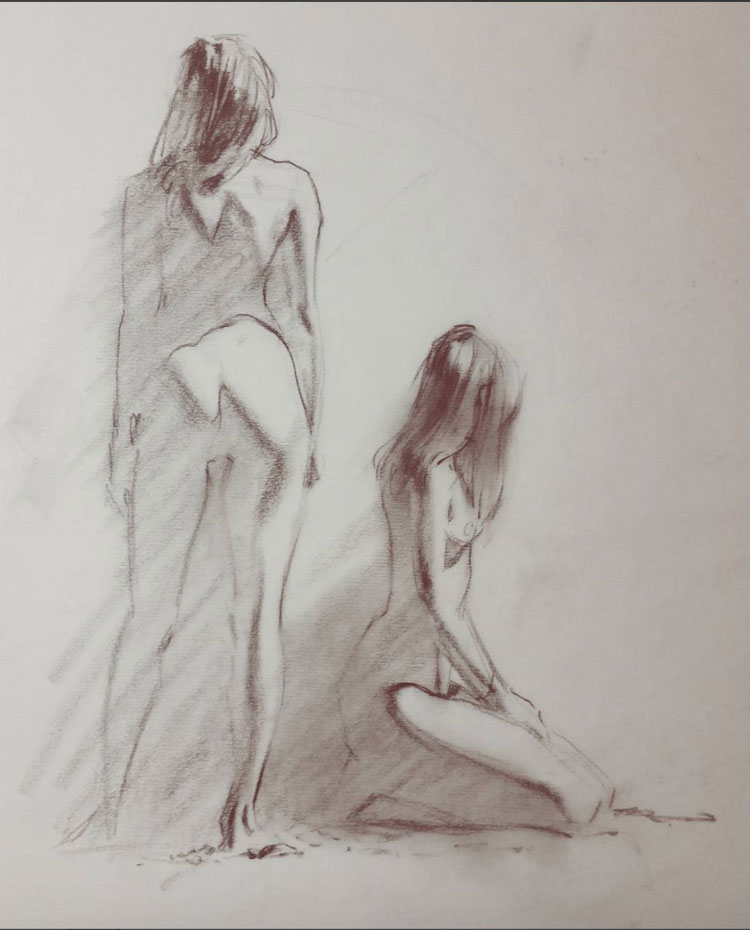 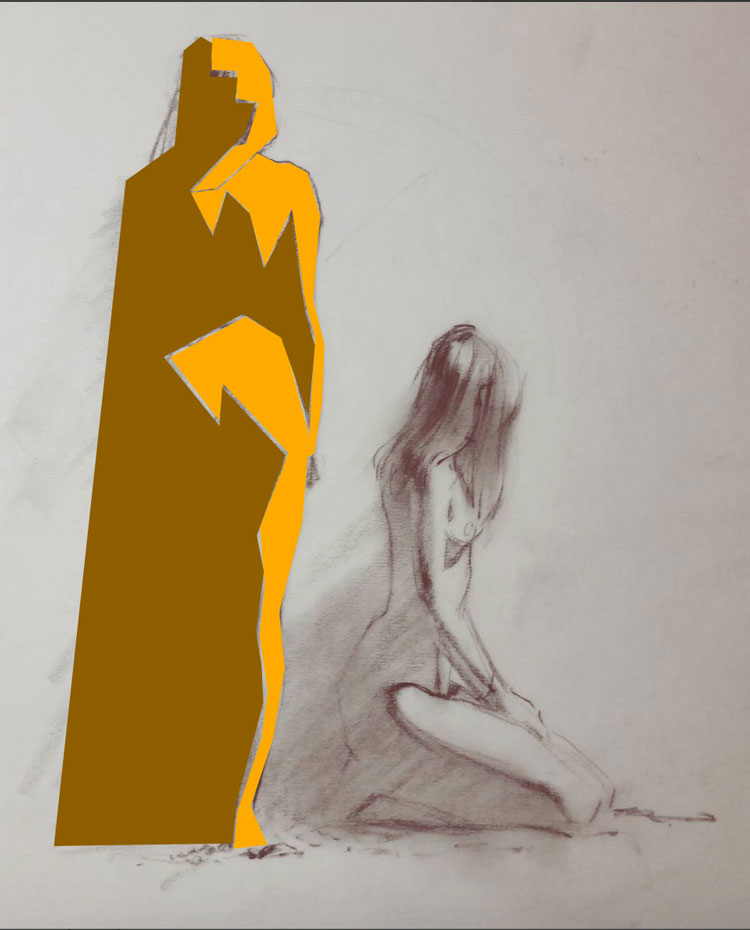 Lane does sometimes thumbnail his figure drawings before starting, i.e. draw some mini mockups of how it could work, to help get a sense of the composition.

Lane’s general approach to capturing the 3D form of the figure is to emphasize and reinforce the large volumes. 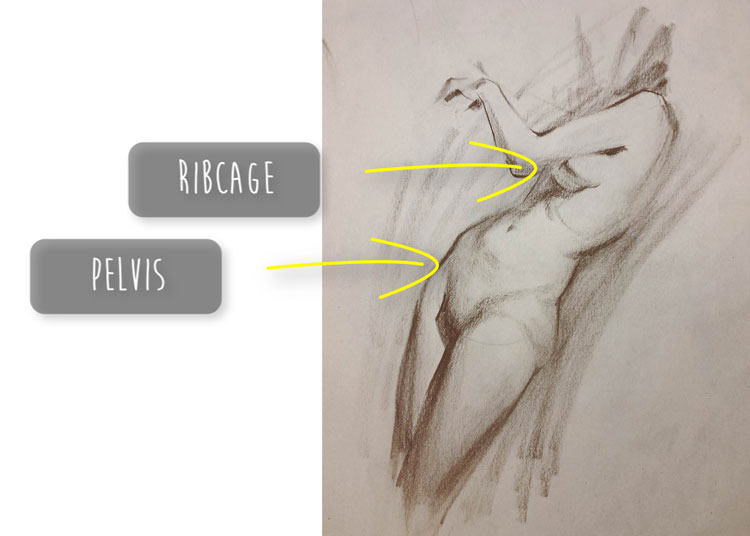 He told me that

“Those big volumes are the foundation of the figure, because everything else, the limbs and the head, branch out from that ‘trunk’ of the body. The relationship between the ribcage and pelvis also establishes the core of the gesture. You can get an idea of what the whole body is doing simply by reading the twist and opposing angles of those two forms.” 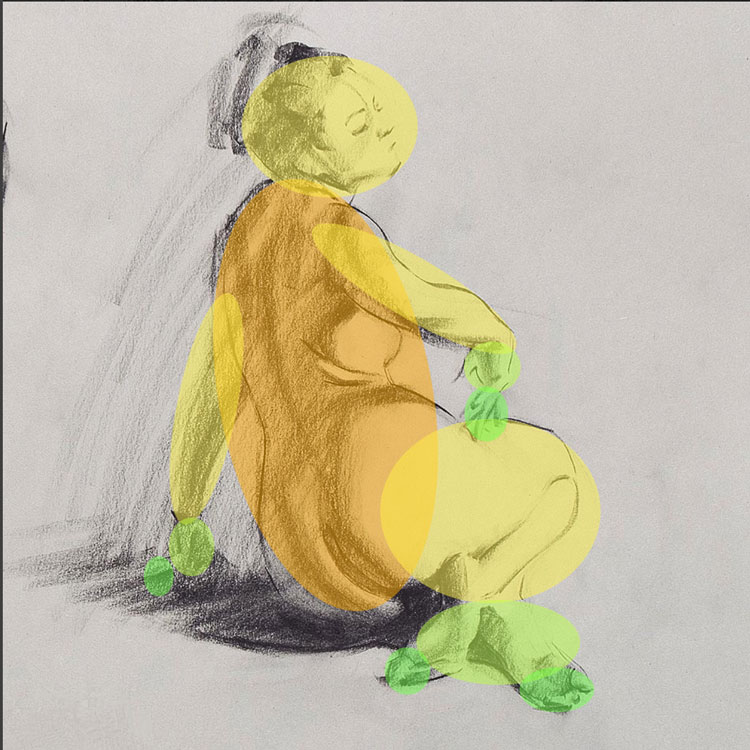 Lane’s anatomy and proportions are generally spot on, but not overbearing. He’s mastered these things to the point where he can now move beyond them towards composition, playing with light, and leaving things out.

Lane pulls out features and characteristics of anatomy that our eyes can quickly recognise in that body part, and hint at it. He doesn’t spell out every rib, but gives a subtle nod to the overall shape of it in the figure. 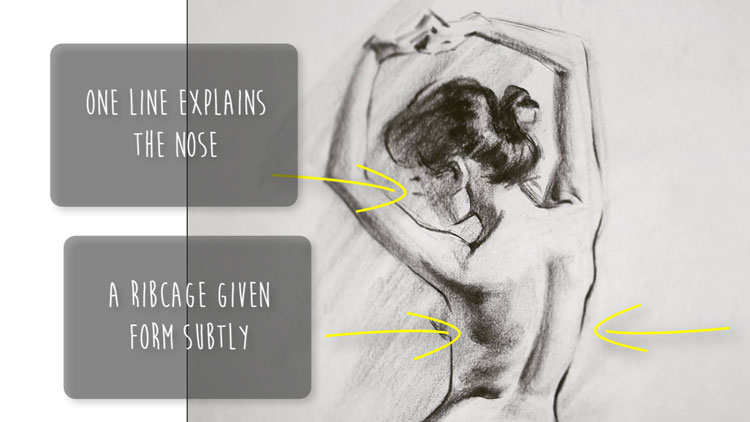 Faces, hands, nothing is given special treatment. Anything can be in the flat dark areas. Anything can be focused on and its key features brought out. But whichever side it’s on, what we see of it is perfect. 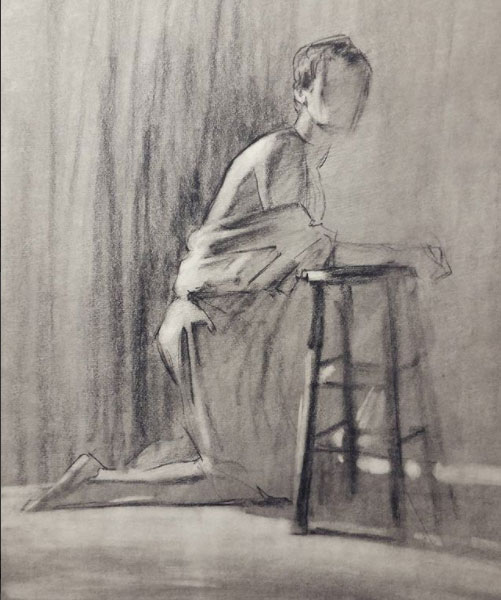 He has studied a lot of anatomy, but doesn’t need an encyclopaedic knowledge of every bone and muscle. For observational figure drawing, drawing from a reference, Lane only needs to understand the large combined forms and how they squash and stretch.

His anatomical study is mainly for his drawings from imagination. He recommends copying the diagrams from anatomy books as a way to train your eye and hand. He warns though to be careful if you become obsessed with anatomy.

‘Just like you don’t want to draw each and every hair on the head, you don’t want to emphasize every muscle or every little undulation of the body. That can quickly overwhelm the drawing and distract from any other qualities.’

This isn’t unique to Lane, but it’s nice and clear in his work: notice how most of the lines are convex not concave to the figure? Even where things go in at the waist, they do so via convex lines. That’s because we are filled with fluid, like water balloons. Lane’s drawings feel like natural, organic beings, full of life, and that’s one reason. 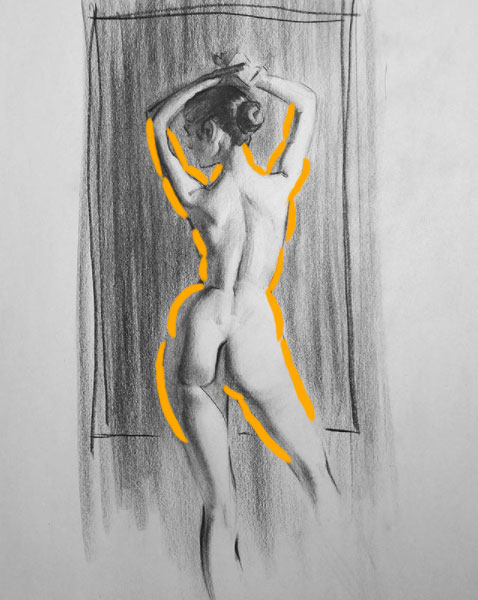 What this all means for you

I wanted to end with a few important points about what all of this means for you and your drawing journey. Having analysed Lane’s drawings, do I still feel like his drawings are magic unattainable to us mere mortals? No, Lane is an artist that has worked hard on his figure drawing, and had the courage to continually move outside his comfort zone and make bold choices. That’s something we can do too. 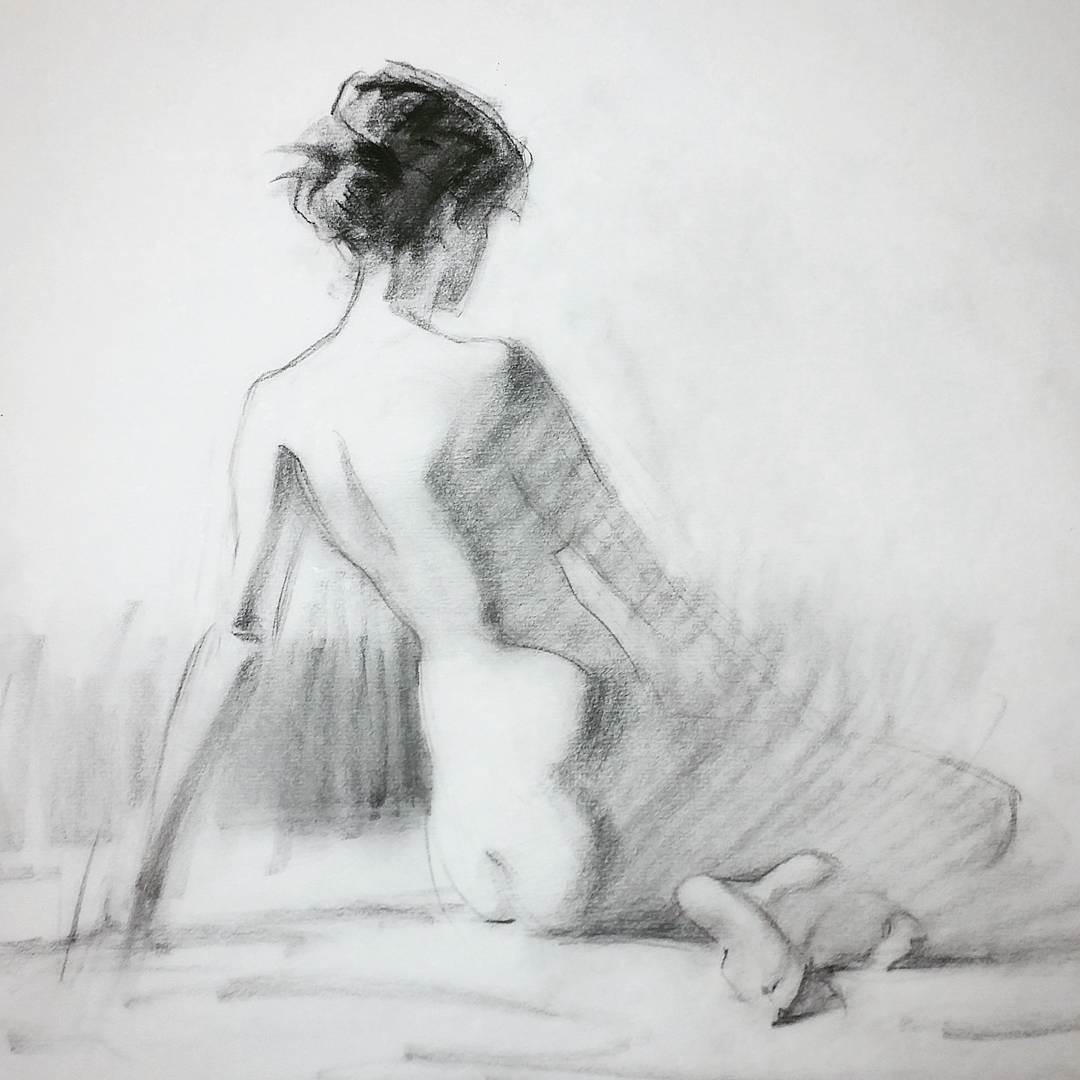 Lane’s eye and arm are trained to the point that now, he can start to play around with the things he sees. He can design his drawing, he can be selective about which observations to include, he can think about composition and even atmosphere. But he didn’t start here. He started where we all start. He went through what we are going through. And then he kept going.

If you are already a confident artist with keen observational skill wondering what you can try next, then I think these videos offer a lot of interesting ways to advance your drawings. Even if you don’t make the same choices as Lane, you can see the types of choices that are available. 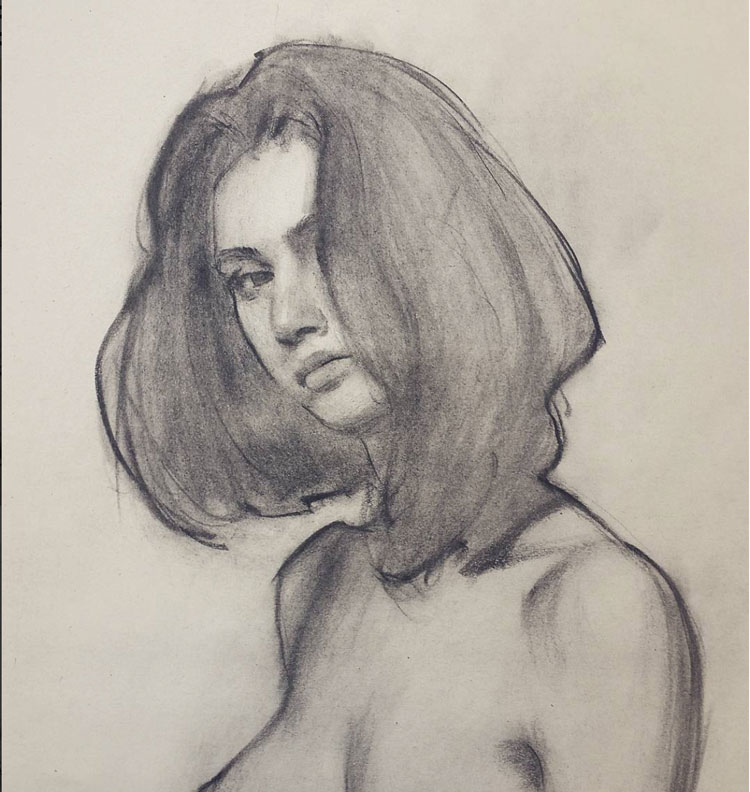 But if you are still learning the fundamentals of observation, or your lines are still tentative and lacking confidence, then I think the takeaway from these videos should not be to try to draw like Lane now. Instead, continue to work on your basic observational and mark making skills, seeing simplified shapes of the light and dark, seeing the large forms in the figure and their relationship. Trying to play with composition or minimalism like he does before the other basic skills are in place isn’t going to work. I would hate it if you tried the techniques we have discussed and then feel like you have no talent or you will never be any good or the other silly things we can tell ourselves.

Hopefully instead it’s inspiring to know that if you continue to progress by doing regular drawing practice, you will eventually reach a point in your journey where new choices arise. You will be able to pursue lighting choices, compositional choices and style choices. That is something to really look forward to, because man, how fun must it be to produce drawings like this?!