Here’s a strange sentence – we have a lot to learn from armpits. They are an intersection of the pectoral muscle from the chest, lats and teres major on the back, and the tricep and bicep on the arm. So studying them is a great way to get a better handle on the muscles of the torso, but also to start to see the figure as a functioning machine, to see anatomy not as a bunch of parts but as a series of connections, and that will help us create more dynamic figure drawings. So let’s get into it.

Here’s a vivid memory from one of the many struggles in my own learning process as a beginner. I tested myself by looking at a pose, and then hiding the reference and trying to draw it from memory. It was a brutal lesson because it turned out there wasn’t much I could draw just from my own understanding of the figure: 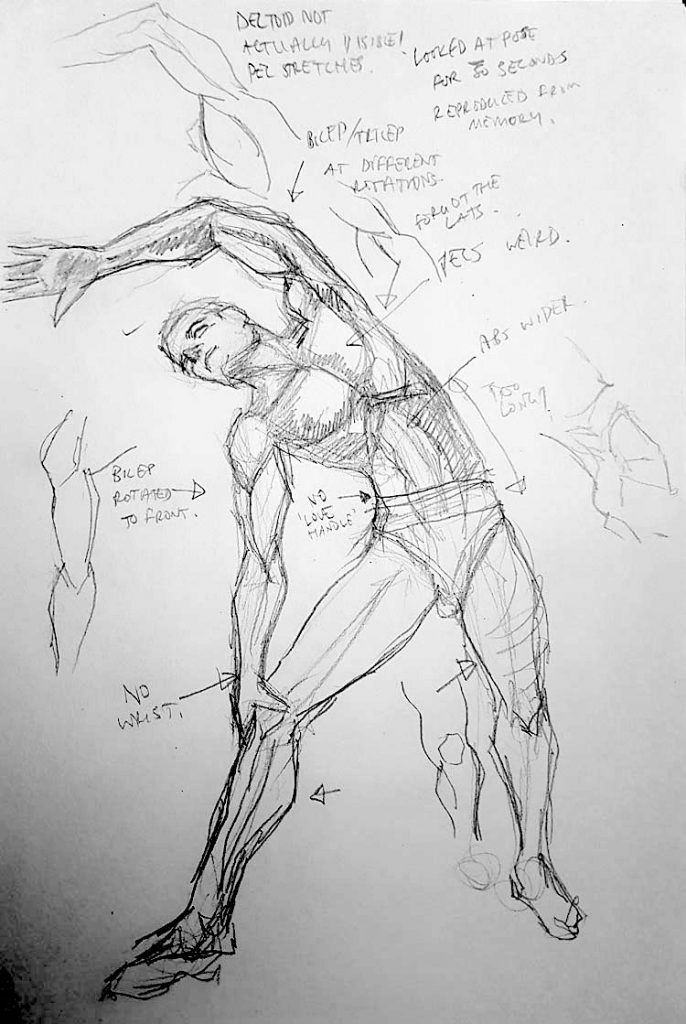 It was like a backwards epiphany – I suddenly understood how much I didn’t know. The armpit was what really got me. I suddenly saw a huge mountain I had to climb to understand that armpit.

So in this post, we are going to simplify this confusing area down into just 4 shapes to look for so that it’s manageable. At the end, we’ll talk a bit more about how to learn anatomy in bitesize chunks.

Lets go through the bones really quickly. There’s the shoulder blades on the back which sort of float around over the ribcage, and that has the joint with the upper arm. A bit comes out from the shoulder blade to the bony tip of the shoulder you can often see on the surface called the acromion and around to the collarbones on the front. 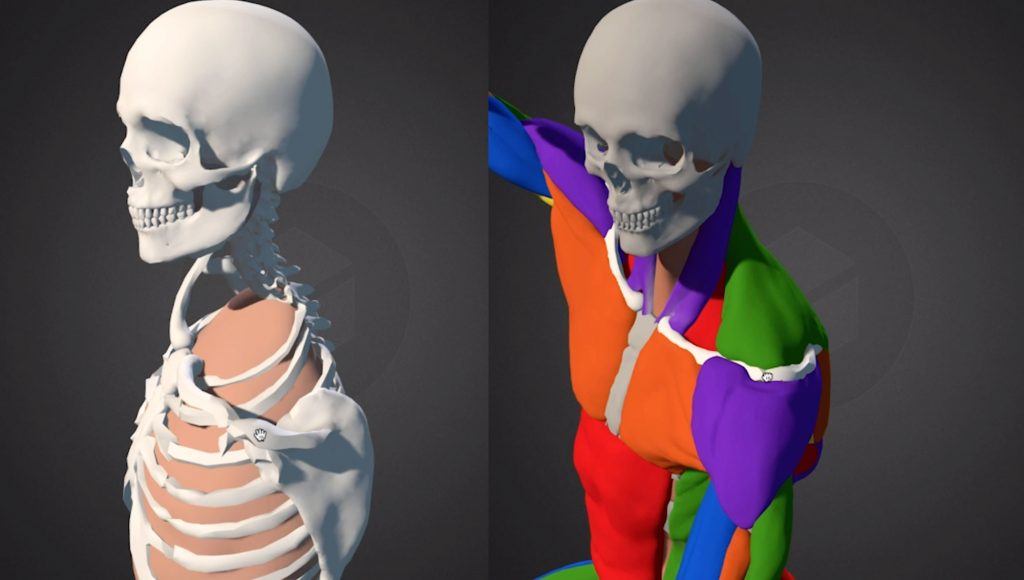 The really important thing to remember is that the shoulder isn’t just a joint stuck on the side of the torso, it’s part of this moving structure that wraps around the top of the ribcage. So you can raise your shoulder and the collarbones will go up, the shoulder blade on the back will move around. It’s pretty amazing.

You can raise your arm a little just using the shoulder joint itself, but to really raise it, you end up pivoting the whole structure upwards and it all comes closer to your head. You usually see the armpit when this is happening and it’s really important to see that whole structure pivoting up and the muscles stretching around with it.

Muscles are there to move things around, and that means they have to be attached to bones in specific places. Muscles on the arm attach somewhere on the torso and muscles on the torso attach somewhere on the arm. These four coloured shapes are oversimplified and maybe a bit wrong, but I think really useful for drawing. There is a fair bit of fat around the armpit, so things do get smoothed out, so often it’s hard to see all the intricacies anyway. If I was smart I’d have used the same colours as the 3D model, but I didn’t!

The pec muscles on the chest are attached to the upper arm bone, a little bit down from the top, so that you can push your arms out. So when the arm is raised, the pec will stretch up with the upper arm and often visually feels like it merges with the deltoid to make one bigger shape like this.

The lats on the back are there to pull the arms back and down, so they are also attached to the upper arm and also come up with it as the arm is raised too. The lat has a little friend called the terres major which is small but visible enough to be worth noting. It’s a little muscle going from the bottom part of the shoulder blade across to a little way down the upper arm bone. So together with the lats, they make the back wall around the armpit. With a raised arm, that sticks out further than the pecs on the front. The lats actually flow around the terres major, right into the pit. The yellow shapes are mostly those back muscles, but also some other bits, and the pit of the armpit itself. 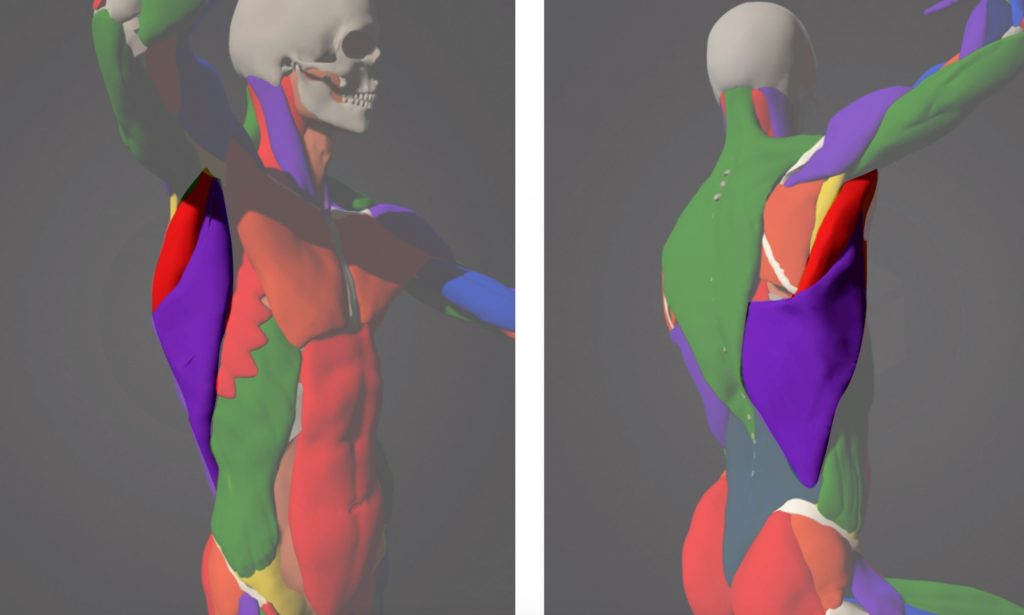 The bicep comes out from from armpit between the pec and those back muscles. The bicep is actually not attached to the upper arm, but to the shoulder blade. You can’t see that part because it’s covered by the pec and deltoid, but it’s coming all the way from the shoulder blade down the upper arm to go to the forearm. The green shape on the model (and blue one on the 3D model) basically corresponds to the bicep, though we’re glossing over some details there too.

Then coming out behind the lat and terres major is the tricep which I have in blue (green on the 3D model), the part of the tricep that attaches to the shoulder blade. The bicep and tricep sort of make the top or the roof of the armpit.

So you can see we have these layers of muscles which weave in and out of each other, pec then bicep then lat then tricep. There are a few things we have glossed over, but I think these four shapes are a nice way to start turning this complex area into something understandable and drawable.

As if we weren’t simplifying enough, lets go a step further. Sometimes, when an arm isn’t flexed and isn’t super muscular,  I feel like it’s hard to see the separation between the tricep and bicep. So in that case rather the forcing something we can’t really see, treat it as one volume.

So lastly we have this muscle on the side here, between the pec on the front and lat swooping up the back around the side. It’s called the serratus, and it’s a sort of fan shape that wraps around the sides of the upper torso, mostly hidden under the lat. In our abs video we looked at the external oblique muscle. The serratus makes a cool zigzag with that muscle on the side, which you would see on super muscly people, but generally you might just see a general diagonal flow down the side of the upper torso. 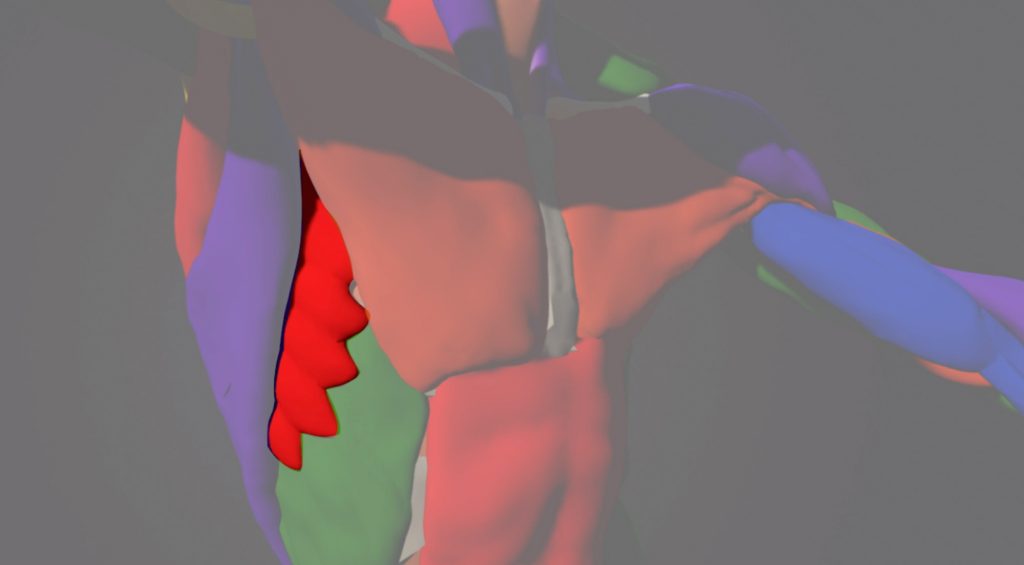 How to draw the armpit

On a very muscular figure, you might want to draw the individual muscles clearly because they are so defined. But generally, this cluster of muscles have some fat on them and of course a layer of skin smoothing things out, so just because we know all these muscles are there doesn’t mean we need to clearly draw them all out like an anatomy diagram. But we can understand the bigger shapes we are seeing better with this knowledge. It can help us to see the movement and gesture because we know the quite beautiful way the muscles flow into and out of the armpit. And we can give some subtle hints at the underlying musculature with our tones. The lats coming on a huge diagonal up the back, the pecs stretching and twisting to get to the arm, then the triceps and biceps taking over, flowing from torso down the arm.

One thing worth remembering is that usually the first thing is to determine what is in light and what is in dark. You want there to be plenty of contrast between those areas.

Then, you can have some gentler variations within that for the undulations of the different muscles, but all the tones stay in the range of light or stay in the range of darks. Sometimes people really heavily outline muscles, forgetting the bigger picture. Here there are lots of bumps and changes because of the various muscles and stuff, but the more important thing is the big picture. This whole area is facing light and this whole area isn’t. All the parts come together to form a bigger volume, then there are little details within that.

Learning anatomy is a pyramid

Finally, let’s think back to that mountain. Let’s turn that intimidating mountain into a manageable pyramid. We want each part of the learning process to be doable and not overwhelming.

You need to start with really basic but really important stuff, like there is a pelvis and you can see the bony tips of it on the surface of the figure, that sort of thing, a lot of which you probably already know and which we covered in our beginner series.

Once you’ve started to see these big structures and their landmarks in the figure, you can start to slowly to take on board the next level, learning how the major muscles connect bones and why, and the essentials of drawing them.

We’re trying to make this lesson and others in this series helpful for this stage of learning. Very simplified, bitesize versions of the more complicated truth.

Then in future you can get increasingly detailed in your understanding, learning about smaller muscles, or the ones that aren’t obvious on the surface but have an impact on the volume you see. But today, we are going for that very simplified understanding of armpits. 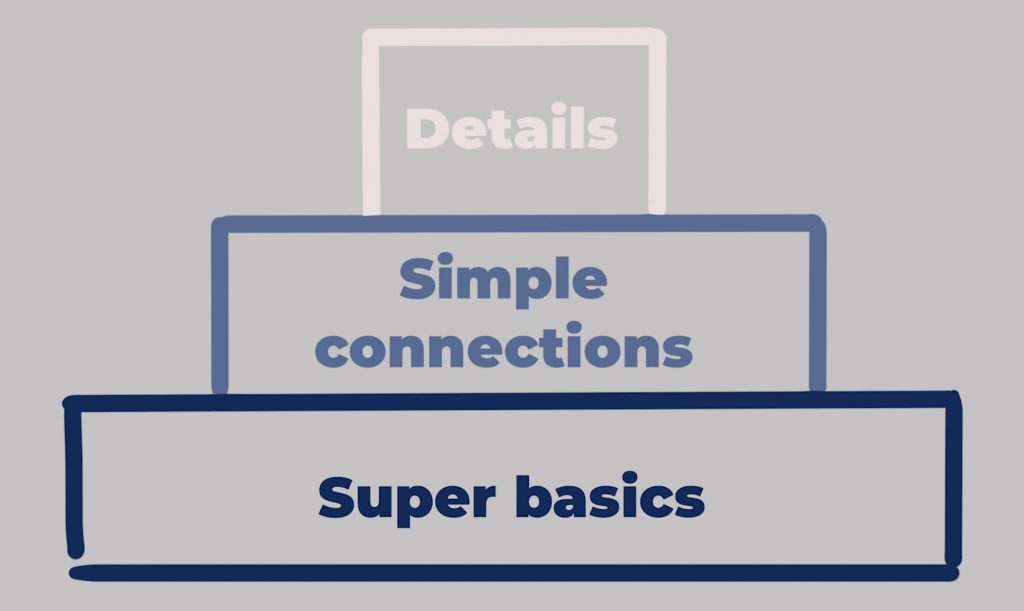 Come over to community.lovelifedrawing.com – it’s free to join and I think we’ll be doing some armpit study over there. If you’d like to know how to learn life drawing, the mindset and learning process to use and the major mistakes to sidestep, get our free guide at lovelifedrawing.com/lifedrawingsuccess. There’s more posts, check one out and I’ll see you over there.