The ability to simplify what you see is, in my opinion, the number one skill that separates an experienced artist and a beginner artist. Even artists that create detailed and nuanced drawings and paintings use that simplification skill to build the foundations of their work. Today we are going to learn 5 steps for simplifying values, the light and dark. Hair is a great way to understand them, and then they can be applied to figures and faces and all sorts.

This process and these demos are from the wonderful artist and teacher Frank Gambino. 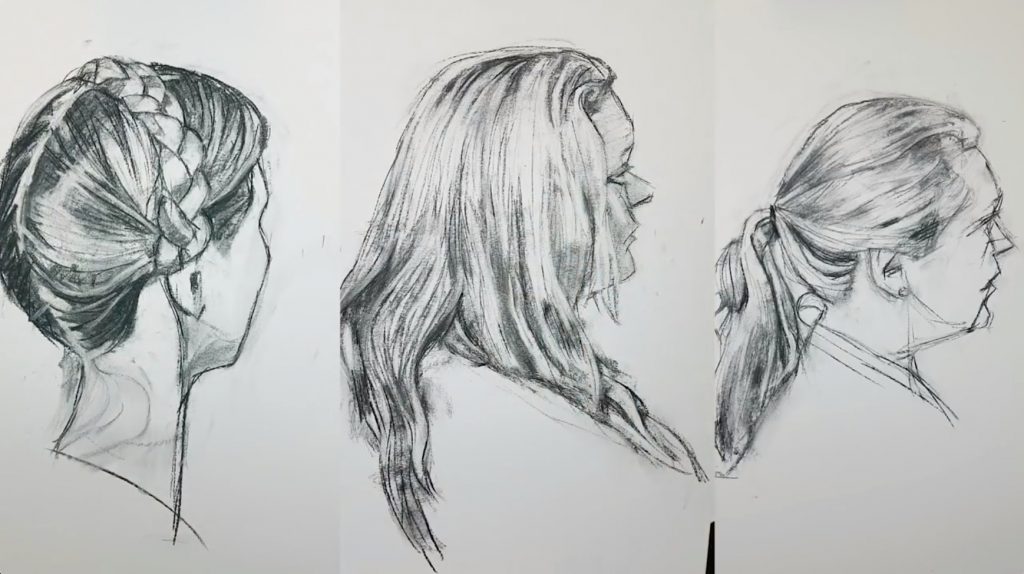 What could be more complicated than loads of super thin strands of slightly varying colour flowing in all sorts of directions, catching and reflecting multiple light sources in different ways.

Light hair is especially complex, because you have the value of the hair itself which often varies, differing amounts of light hitting the surface of the mass of hair in different places, the darkness within the depths of the hair where the light doesn’t reach, and specular reflection or shininess with lighting bouncing right off the hair. 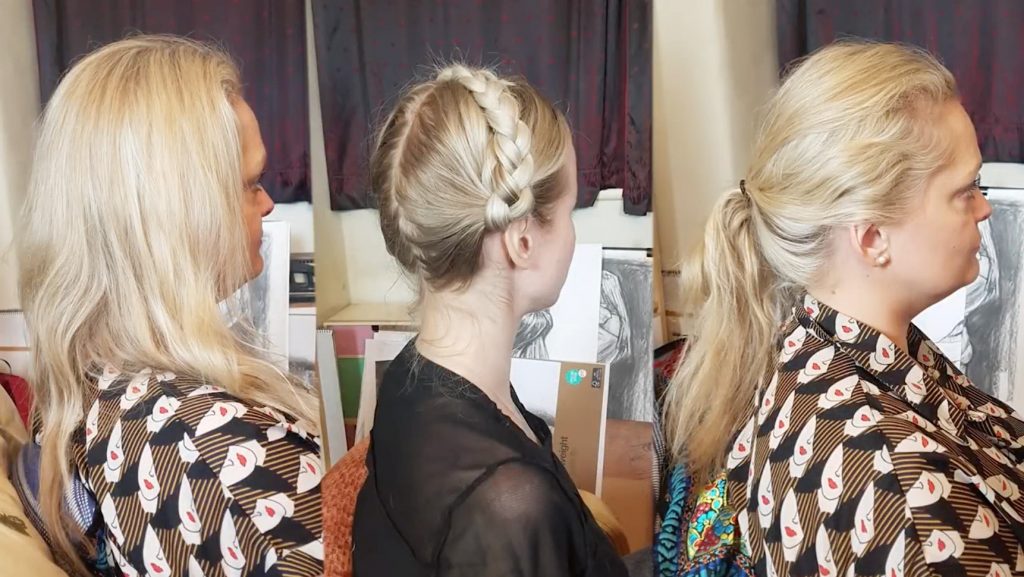 And the first instinct is to match that complexity with your own complexity. Draw tons of strands with the tip of your pencil. We do the exact same with figures and faces generally – human bodies are complex and every pose is filled with endless subtlety and nuance. When we start drawing, we get drawn into all of it, and get lost.

Frank Gambino runs the life drawing class we attend and is an awesome artist, teacher and a super nice guy. 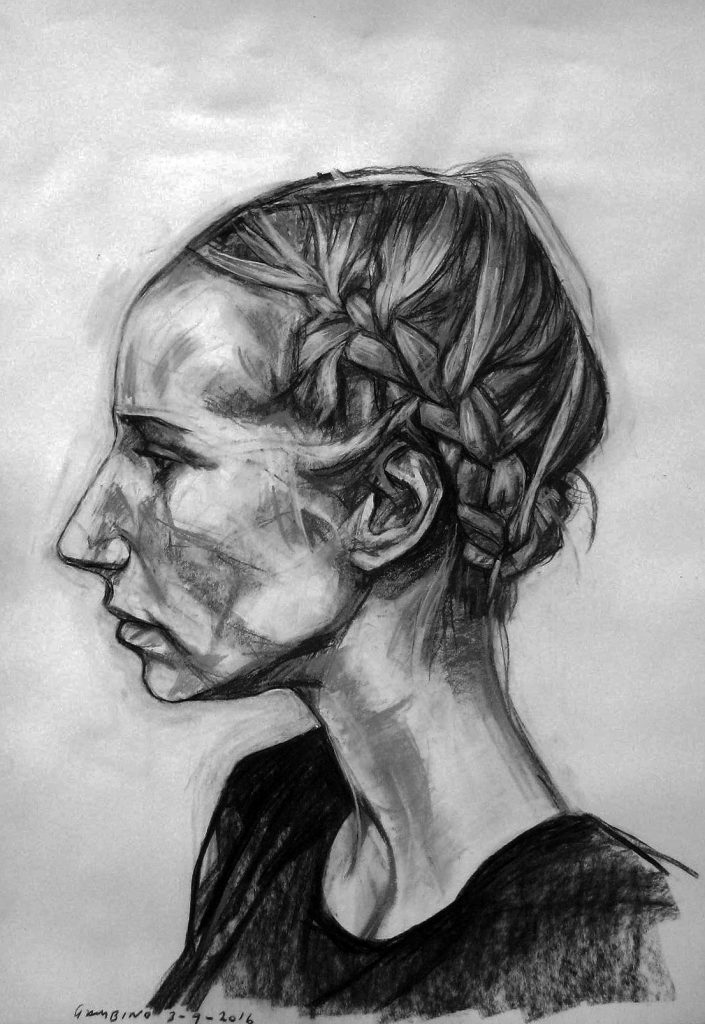 When Frank starts drawing complicated hair, he lifts up that complexity and looks underneath it, to find something super simple. This looks like quite basic mark making, 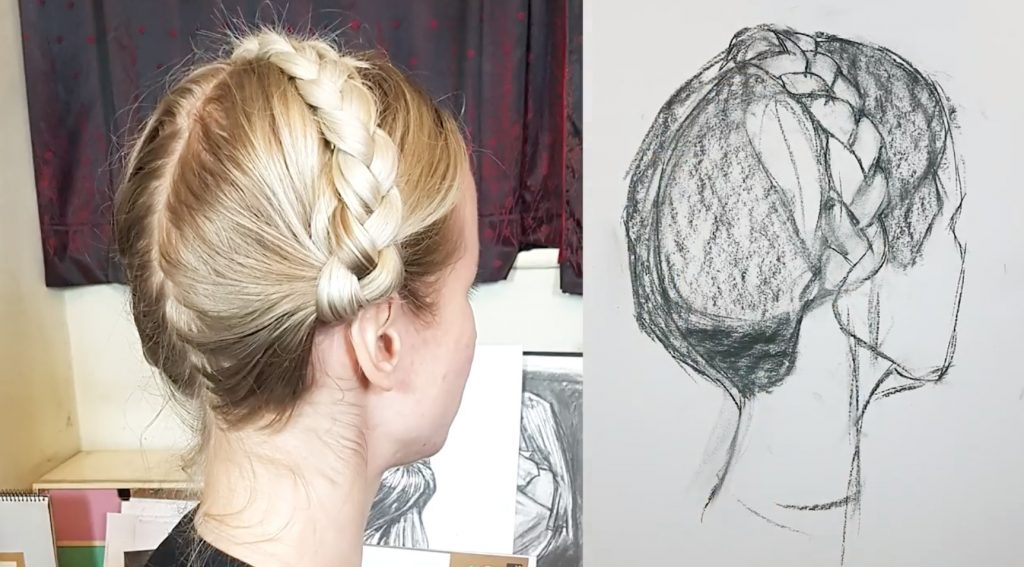 but soon enough it becomes an incredible drawing like this. 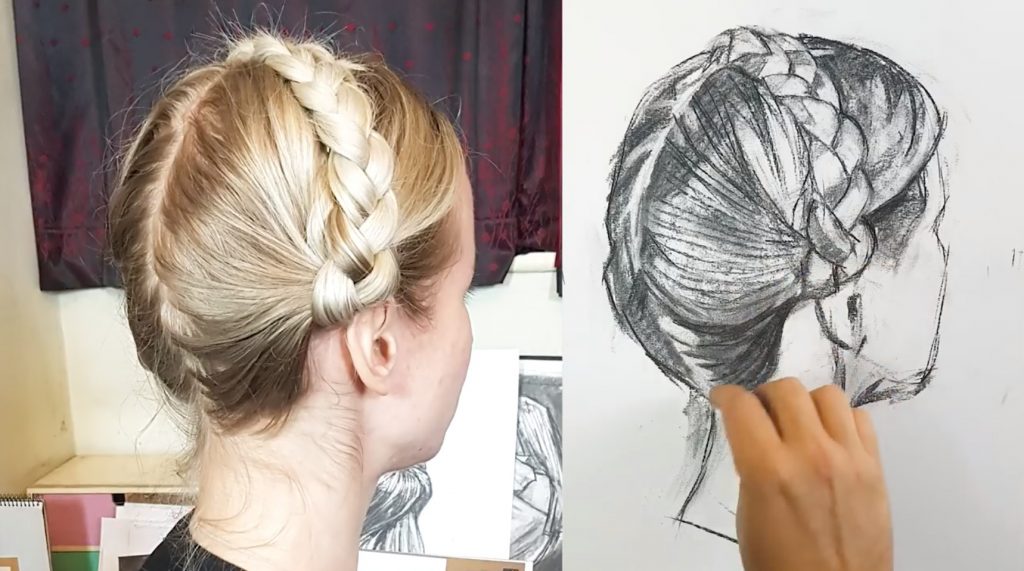 Even really complex hairdos like this become doable with this simplifying process. But it’s not enough to just say ‘start simple’. How does he simplify? Here are 3 principles of simplification.

This is a school of little fish pretending to be a big fish. 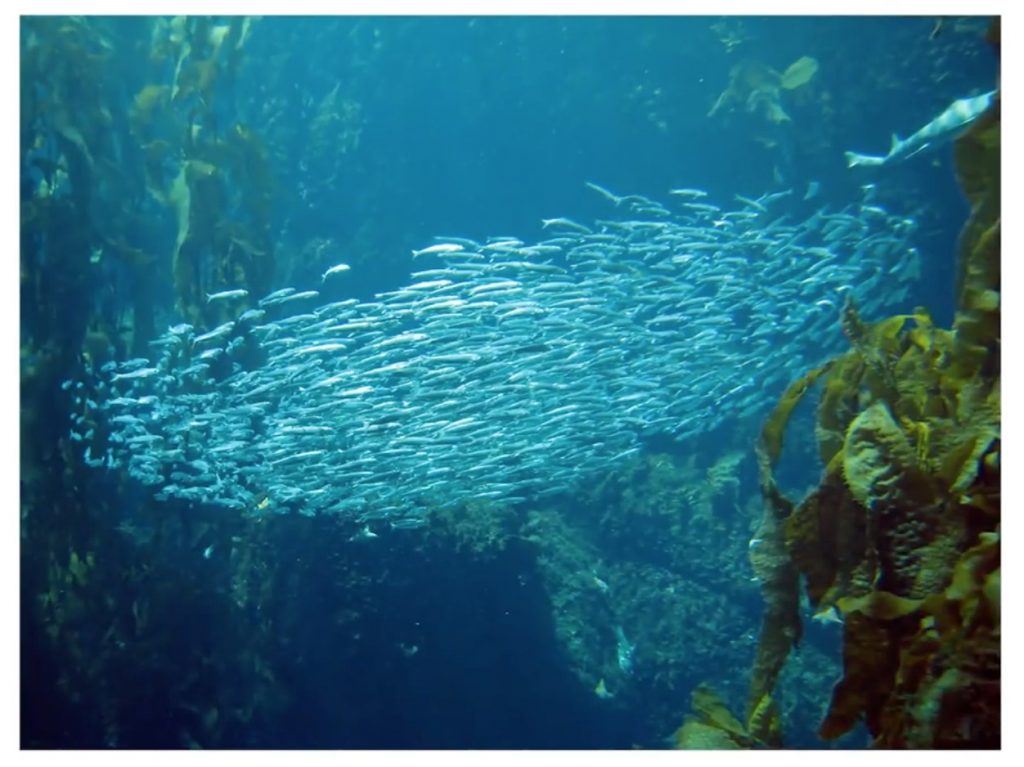 Let’s be taken in, let’s be fooled and let’s believe them. This is one big fish, brightest in the middle, darkest at the ends. 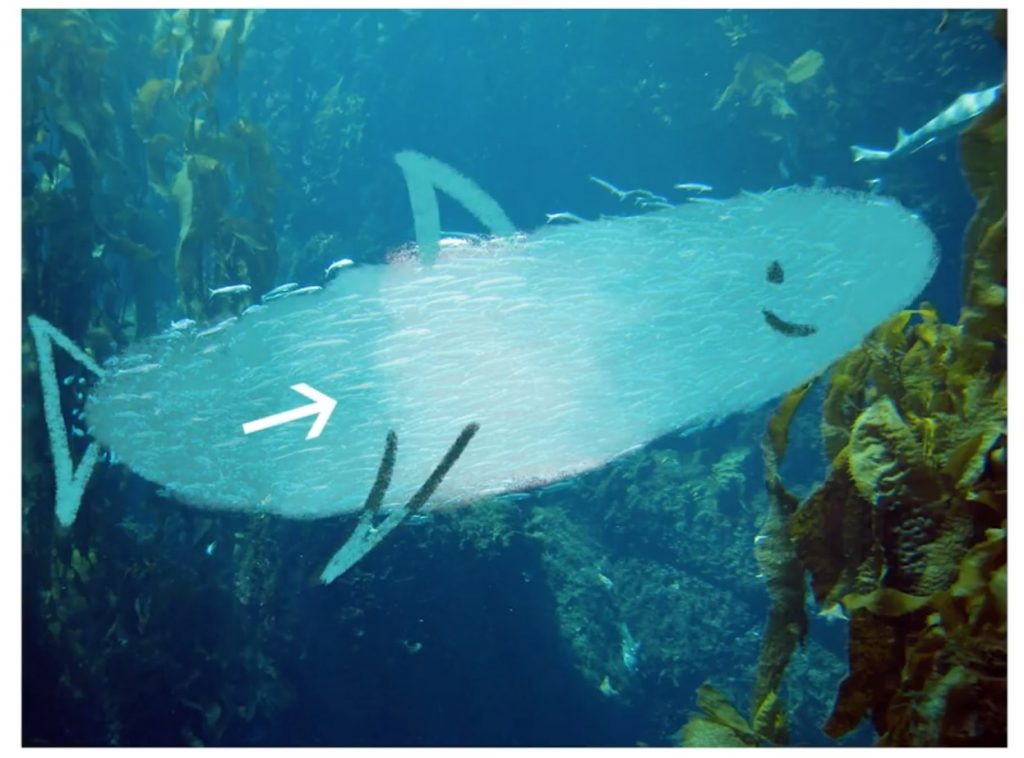 The hair in each area is flowing roughly together. There are strands and little bits doing other things, but he has to be decisive and cut through the noise to make group the overall mass of hair into simpler shapes. 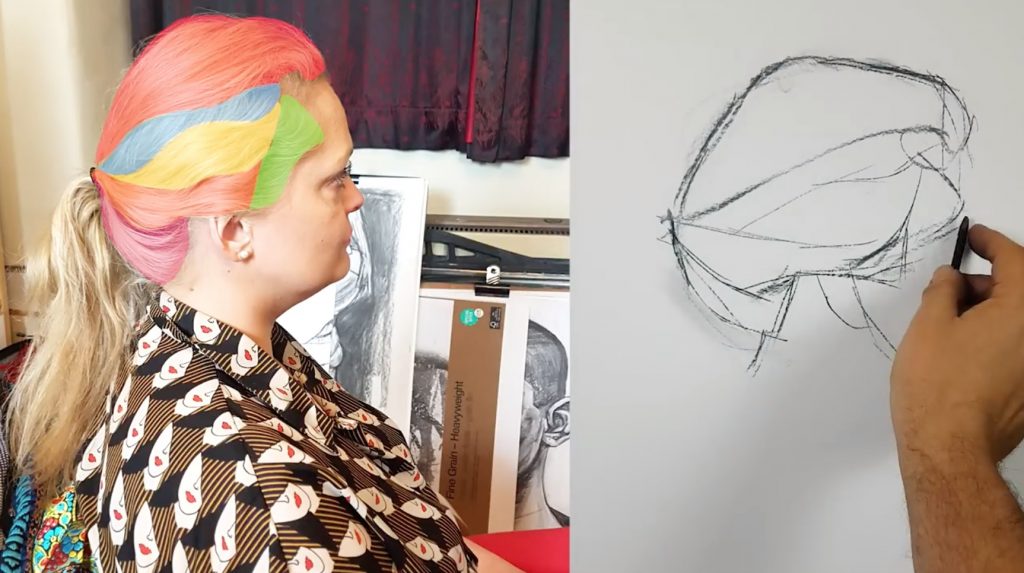 For this platted hair, each plat deserves its own shape because each one is its own volume. 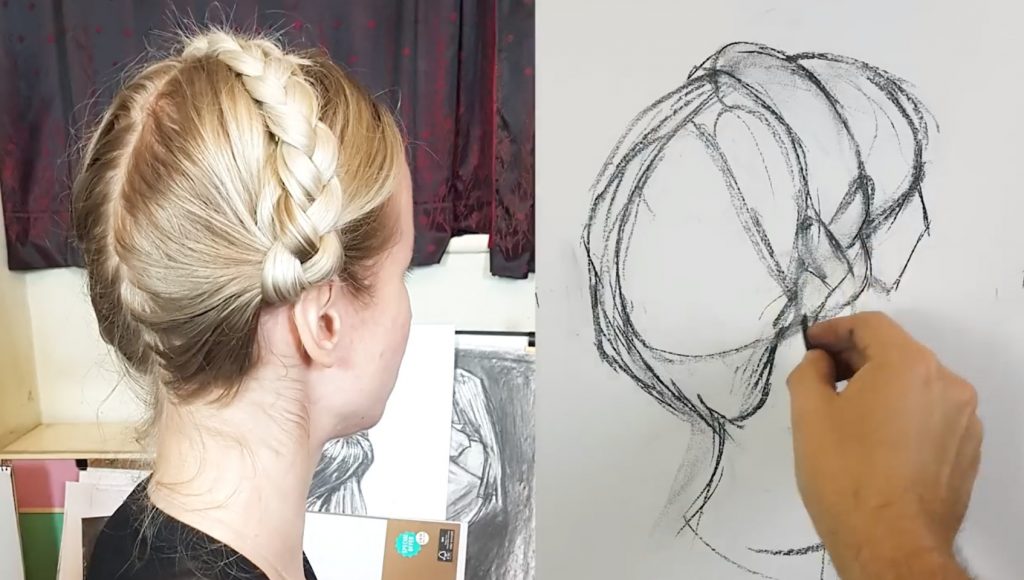 Frank roughed in the face super quickly here, and notice that it’s a similar story there. There’s so much nuance and detail in the face, with so many muscles and features and terrain, but he’s grouped areas together into planes. This area roughly faces the same way, this area roughly can be grouped to one basic plane too. That ability to say ‘there’s a lot here but it’s basically all part of this shape’ sounds easy but takes ages to get good at. 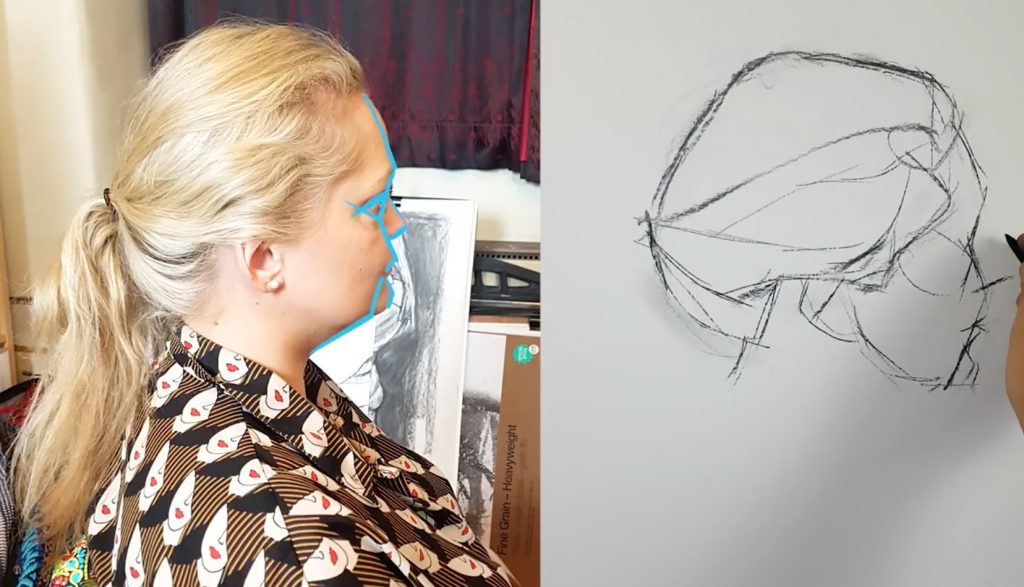 And it’s the same in the figure. You might see all the anatomy, but when you start to draw, you need to find the bigger volumes all those little elements create.

Things are still complicated though because of the light like we talked about. There’s some areas catching light more directly and some less. There’s some light reflecting off the hair creating bright highlights, there’s the dark depths of the hair where light can’t reach. 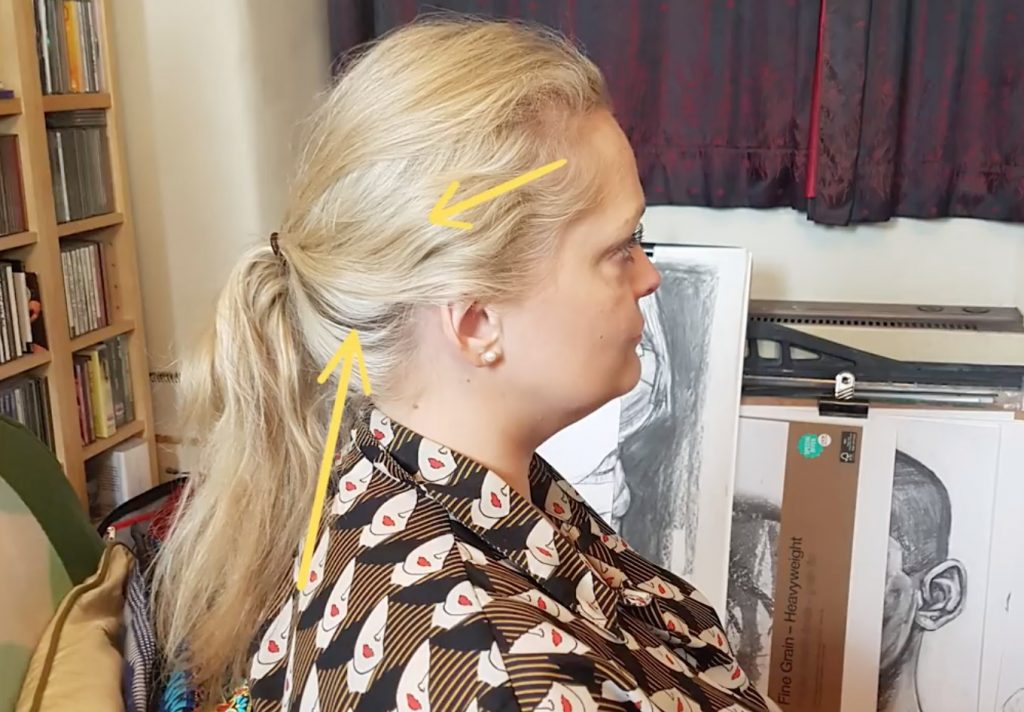 So within those big simplified volumes, the values, the variation in light and dark are still too complicated. The next 4 principles are about simplifying all those values.

Imagine a penalty shootout. You’re the goalkeeper, trying to keep the whole goal covered. The ball could come here or here. The easiest place to start is in the middle, so you can easily go either direction. You wouldn’t stand at one end. 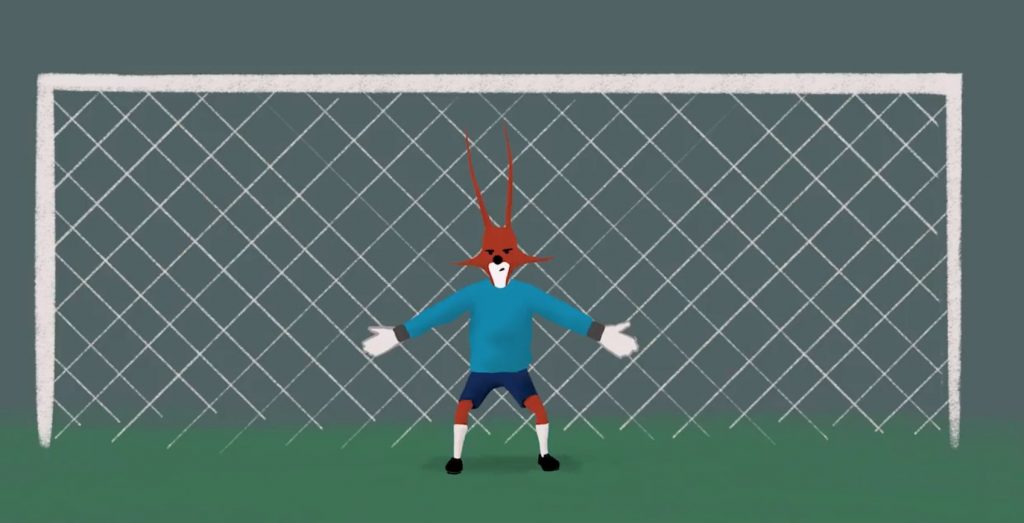 But white paper is at an extreme, it’s at the brightest end. So Frank decides to start in the middle with a big mid-tone shape. 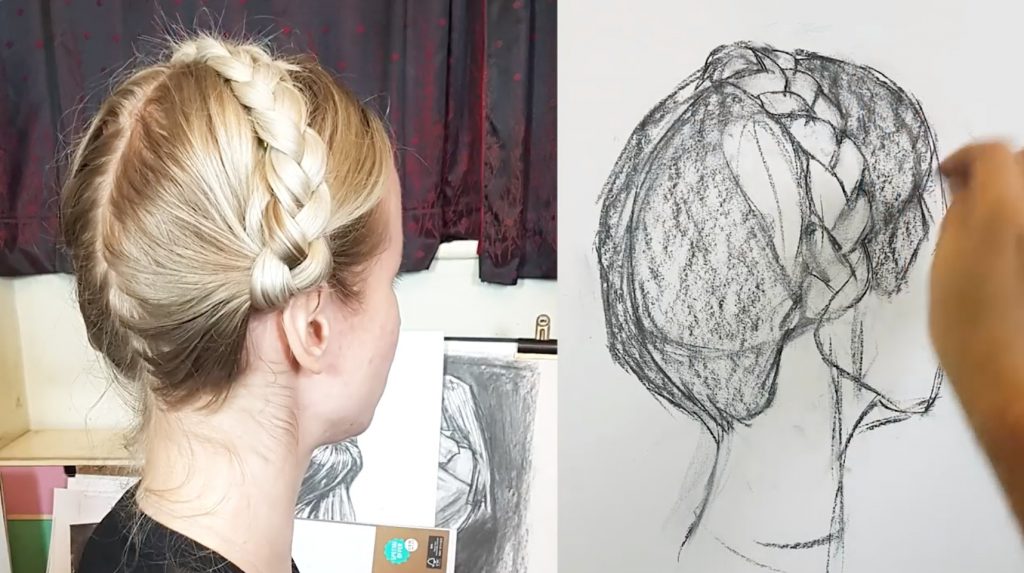 Sometimes you do have to plan ahead a bit to leave the light areas light, especially with a material like watercolour. Here Frank left a lot of white space because this area is all so bright, he’d like to that pure brightness of the paper and he’s only going to be working within a bright range of tones in this area anyway. 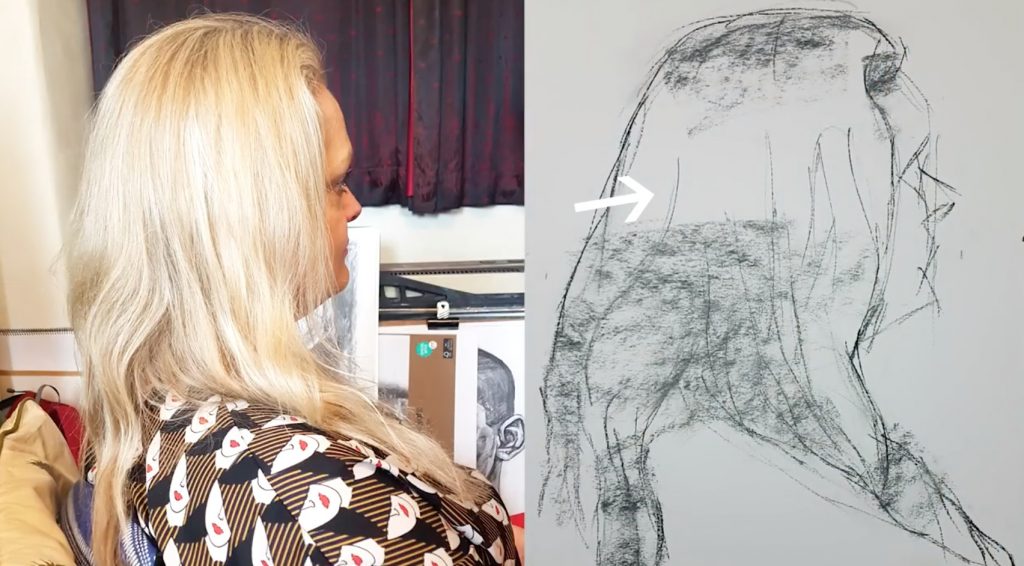 He doesn’t need to get the value of each part exactly the same as what he sees. More important is to get the relationships roughly in place. So you can start to see the lightest areas versus mid-dark areas and then the darkest of all. 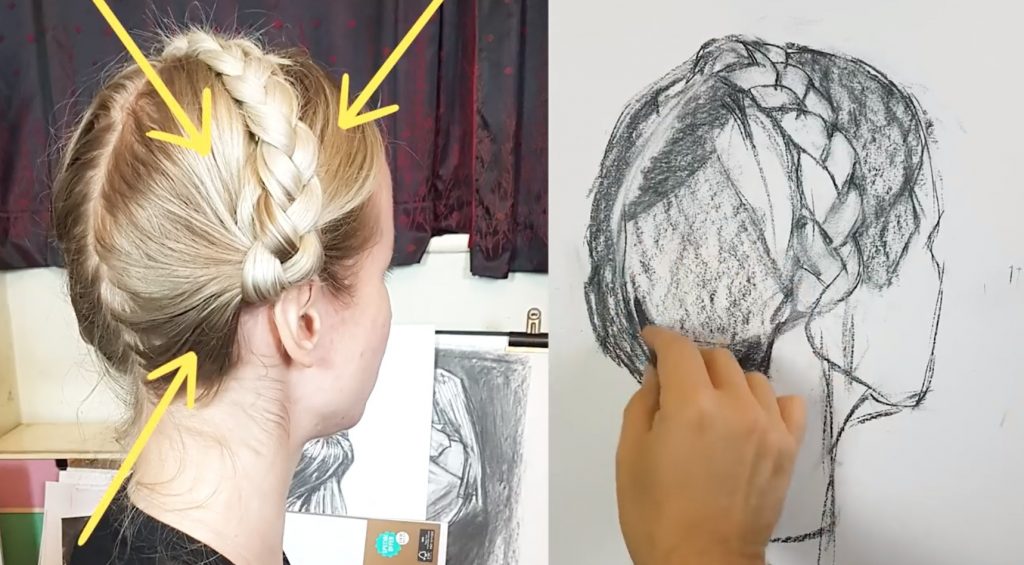 Navigating all the various tones by starting in the middle and then just thinking about relationships pushing areas one or two levels darker and lighter makes it all so much easier.

Group the tones into big shapes

Frank grouped the zillions of strands into simpler structural groupings. When adding light and dark he again needs to cut through small variations and find broad areas to group into light and dark. There’s some darks bits here, but overall, it’s bright in relation to the other areas. 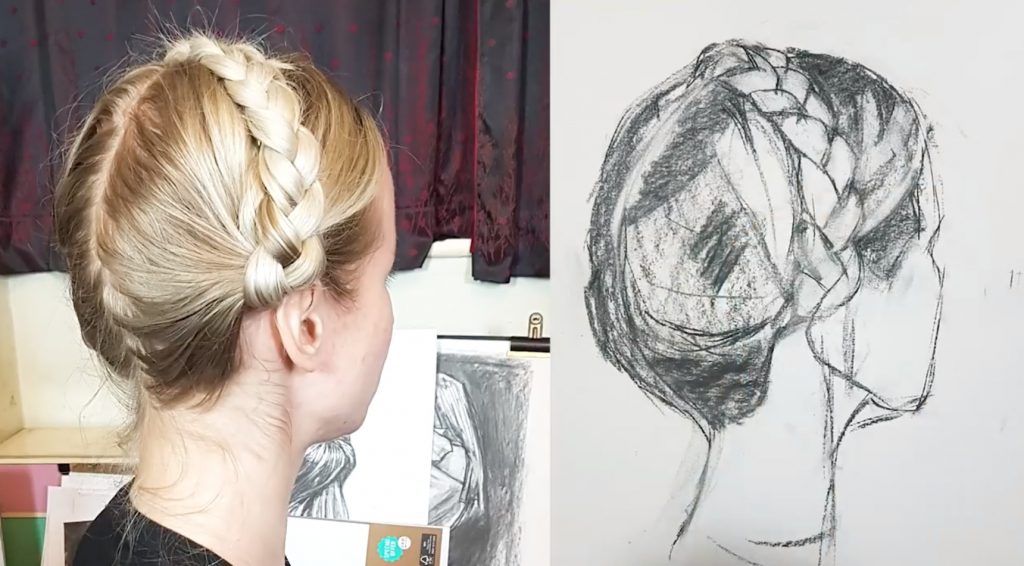 What about here? There’s some light bits but overall, it’s dark in relation to other areas. To help you cut through the little details and see the big shapes that have roughly the same value, squint your eyes. Even within this step grouping areas into shapes of light and dark, he sticks with that principle of starting simple and building from there. So he starts extremely simple with really big shapes. Then he built up more variation, breaking it up into smaller areas of light and dark. 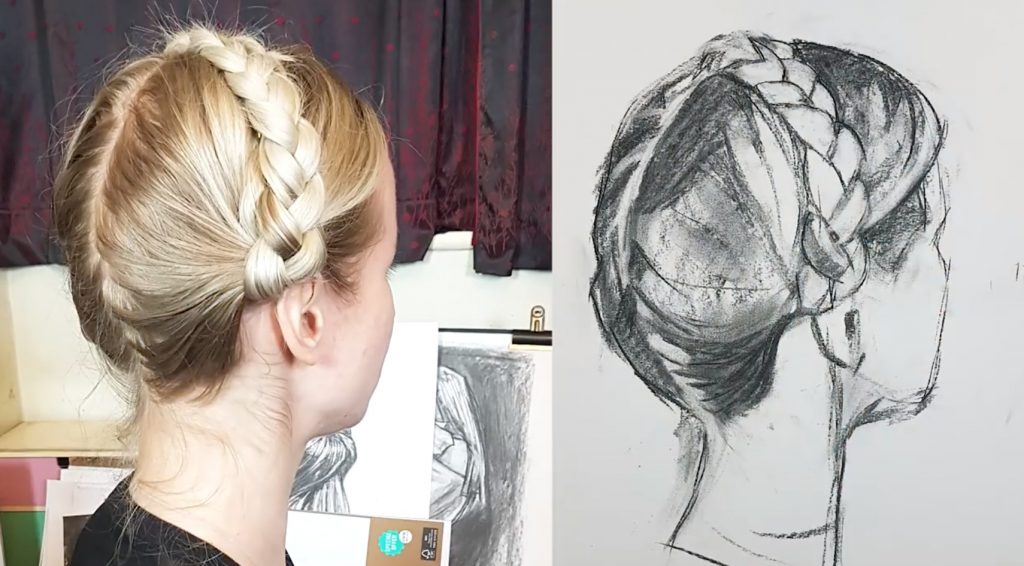 Add details only when the structure is established

Frank has resisted thinking about strands til this very final stage. He kept building the values and now that it’s all in place, he can add a layer of strands. All that work laying the foundations pays off now, and suddenly the big dark and light shapes become a wonderful head of hair. So to simplify your values, first simplify the volumes the light is hitting, then where you can start in the middle of the values so you can push areas towards light and towards dark, think in relationships rather than trying to get the exact values you are seeing, group values into a few levels and then only worry about details once that underlying value structure is established.

If you are learning life drawing and finding it tough, we have a free guide, a little booklet, all about how to learn life drawing, getting through the difficult learning process. It can be a hard road, but it is so worth it when you can make drawings you are proud of.

Check out Frank’s Instagram page, and get our free guide to life drawing at lovelifedrawing.com/lifedrawingsuccess.