How to Paint like Kelogsloops – the Ethereal Watercolours of Hieu

What makes Hieu’s paintings so attractive and how can we achieve that? Today we are going to break down the artwork of Kelogsloops, aka Hieu, and see what we can learn for our own work. Below is the video breakdown, and below that it is written out as an article.

A big thank you to Hieu for giving me permission to make this video and show his paintings. His Instagram and YouTube channel are both @kelogsloops, and they’re both well worth subscribing to.

We are going to look at Hieu’s compositions, focal points, use of colour, subject matter and design choices. I found Hieu when I was looking for watercolour tutorials, because he has some concise and comprehensive ones about the techniques he uses. I’ll link to them below if you’re interested. But because he explains the brush and paint techniques he uses for different effects so well, we won’t be covering the actual techniques in this video. 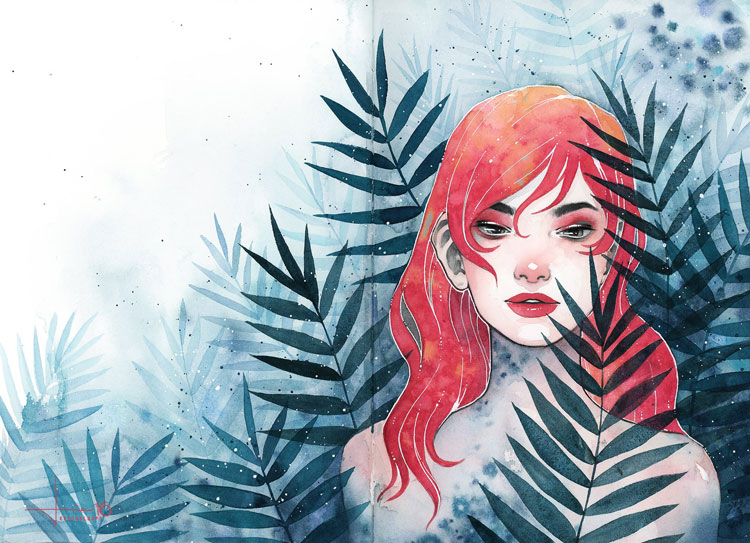 Hieu’s paintings have a strong sense of movement. His compositions are lovely, and he has a variety of tools he uses to help build them. He has various ways to guide our eyes to focal points and play down other areas. 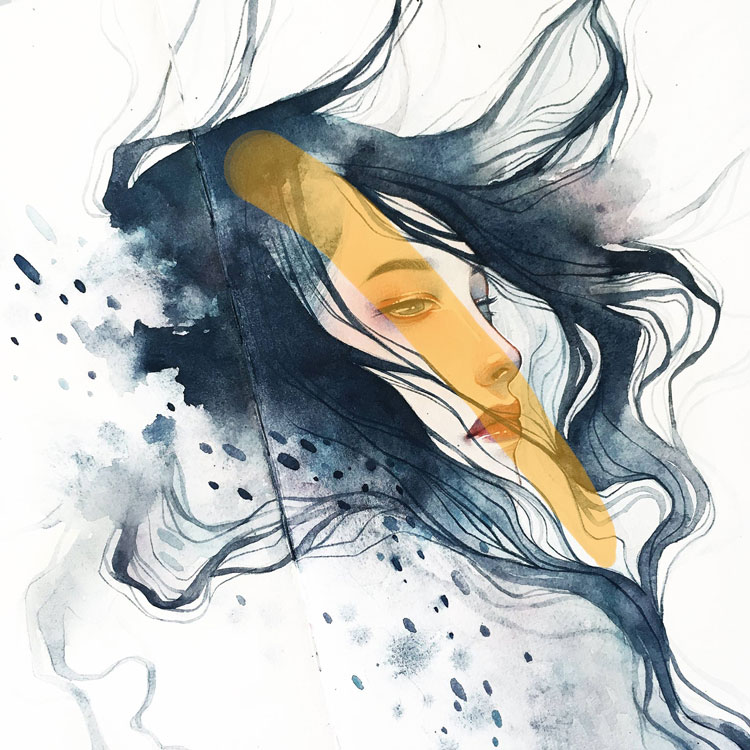 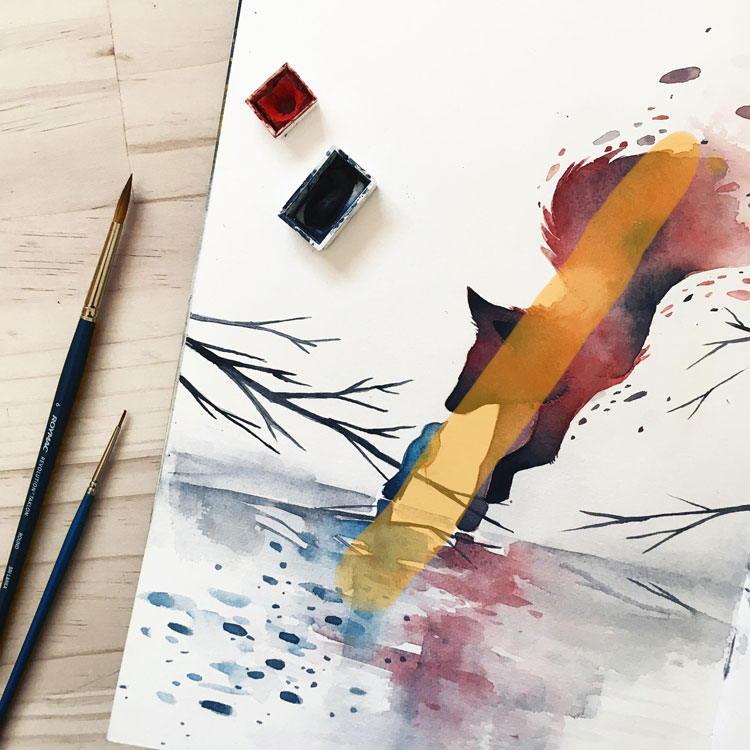 Colour temperature is really important to the mood and emotion of a painting. Hieu heavily uses the contrast between warm and cool in his colours. 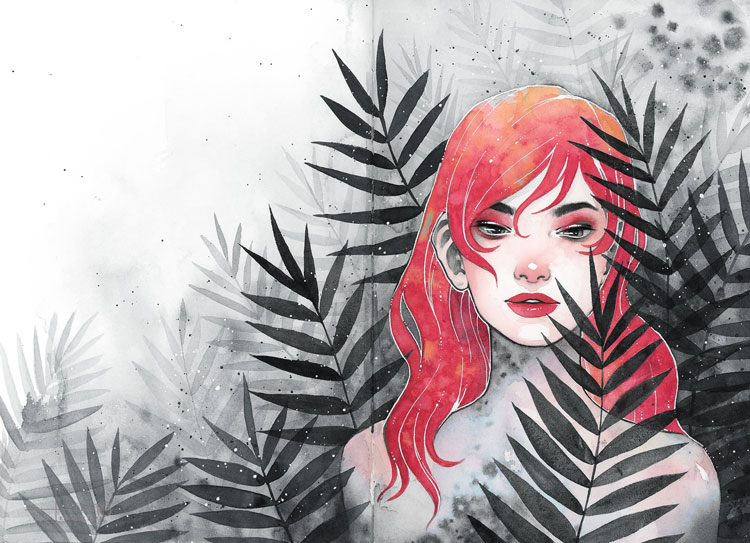 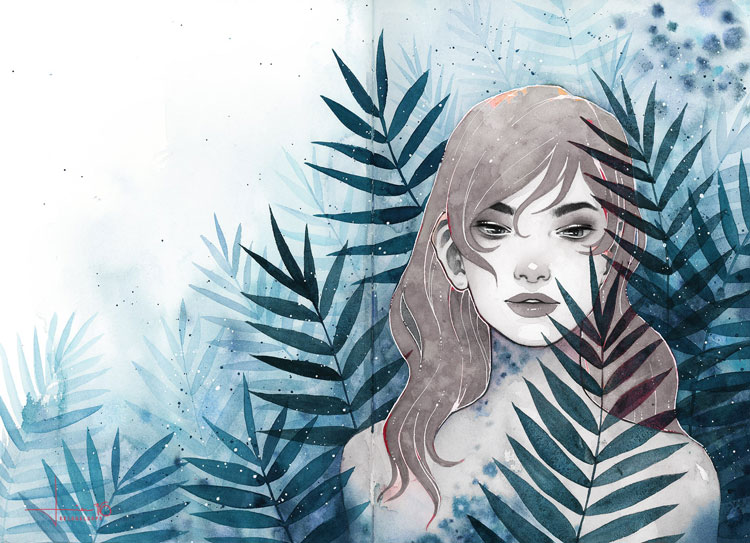 Cool colours tend to go into a drawing and warm ones pop out – not always but that’s often the case. They also intensify each other when set against each other. Hieu uses these characteristics to great effect. His main character will often be warm, set in a cool environment.

Most often he’ll use a less saturated dark blue for the environment, and then a smaller amount of a fairly saturated red for his subject so that it really pops out of the painting. He varies how heavily he’ll bring forward the warms though – sometimes if there are other elements that want some of the eye’s attention, he won’t make the contrast so intense. 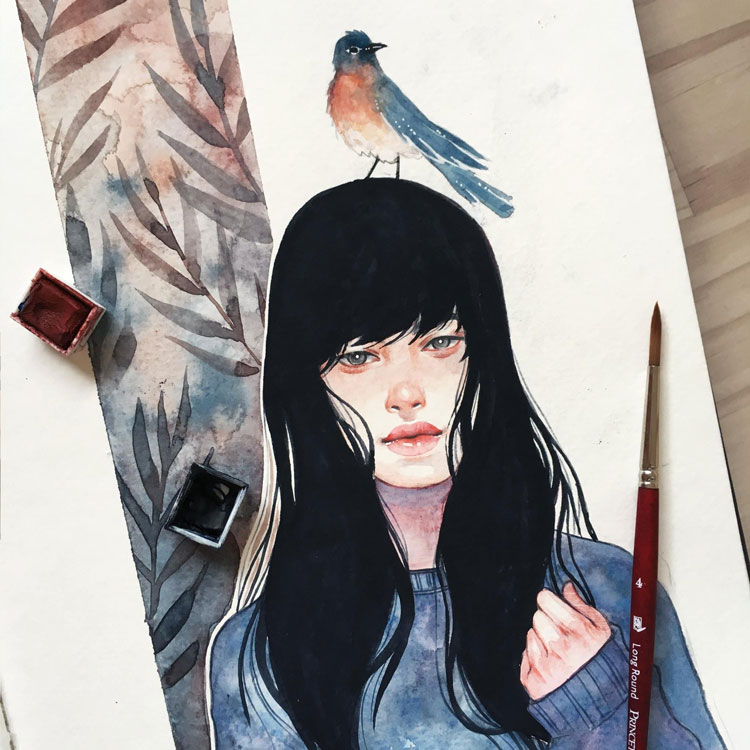 He also uses value contrast to make the main character pop – they are often very light and set in a darker environment.

In the non focal point areas, he’ll often use wet on wet technique to provide a semi-transparent underlayer and then use wet on dry technique with the same colour. This way there are clear shapes but they don’t draw too much attention because of their lack of contrast to what’s behind them both in terms of value and temperature. 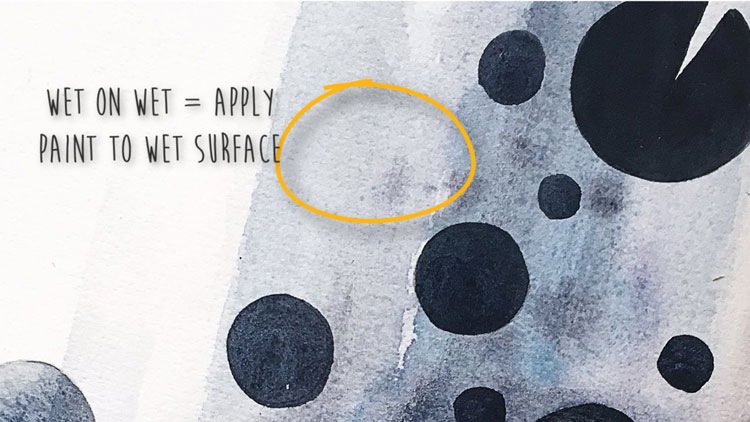 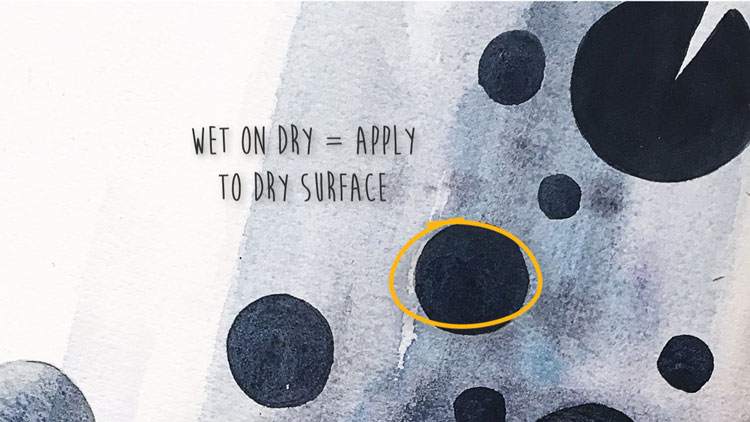 Hieu softens some edges til they disappear, and then carefully chooses what will get hard, crisp edges often accompanied by that strong contrast in values.

So, the focal points get value contrast, hard edges and warm colours, set in an environment filled with cool colours, little contrast and very soft edges. 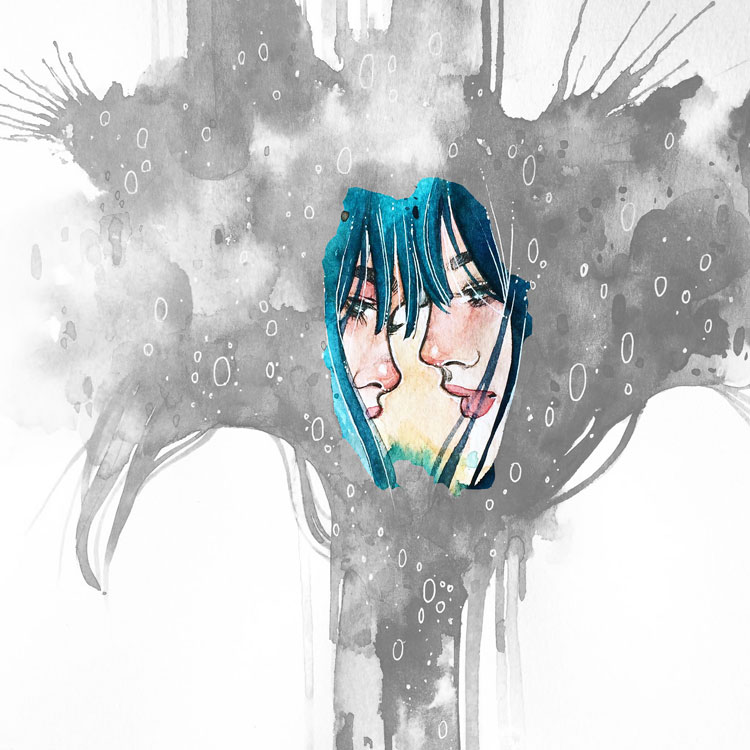 Now for me one interesting thing about Hieu’s paintings is that often I enjoy the environments – the cool temperature, lower contrast, non focal point areas – the most. They have a lot of interesting design elements and creativity in them. It shows how much effort he puts into them. 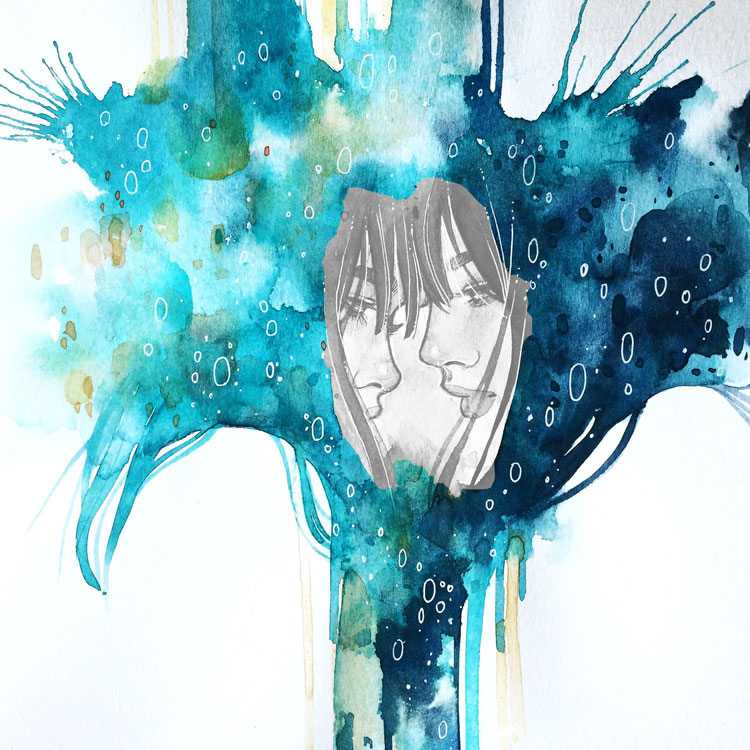 Hair as a graphic

We always say treat hair as a volume, not as strands. We emphasise that you should aim to see the light hitting the mass of hair and the shade caused by it, simplify that and capture that. Only worry about the strands if they fall away from the mass. And Hieu does those things, But he sees two opportunities in the hair, and those are his priorities. 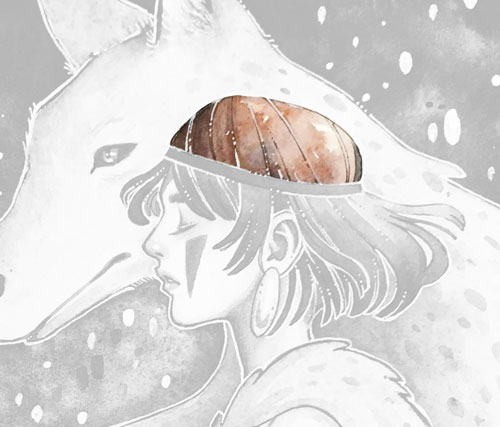 One is to emphasise the painting’s movement. And second, he treats it as a design space. So he might give some little nod to the hair’s volume, but again it’s mainly serving a purpose way beyond being hair. 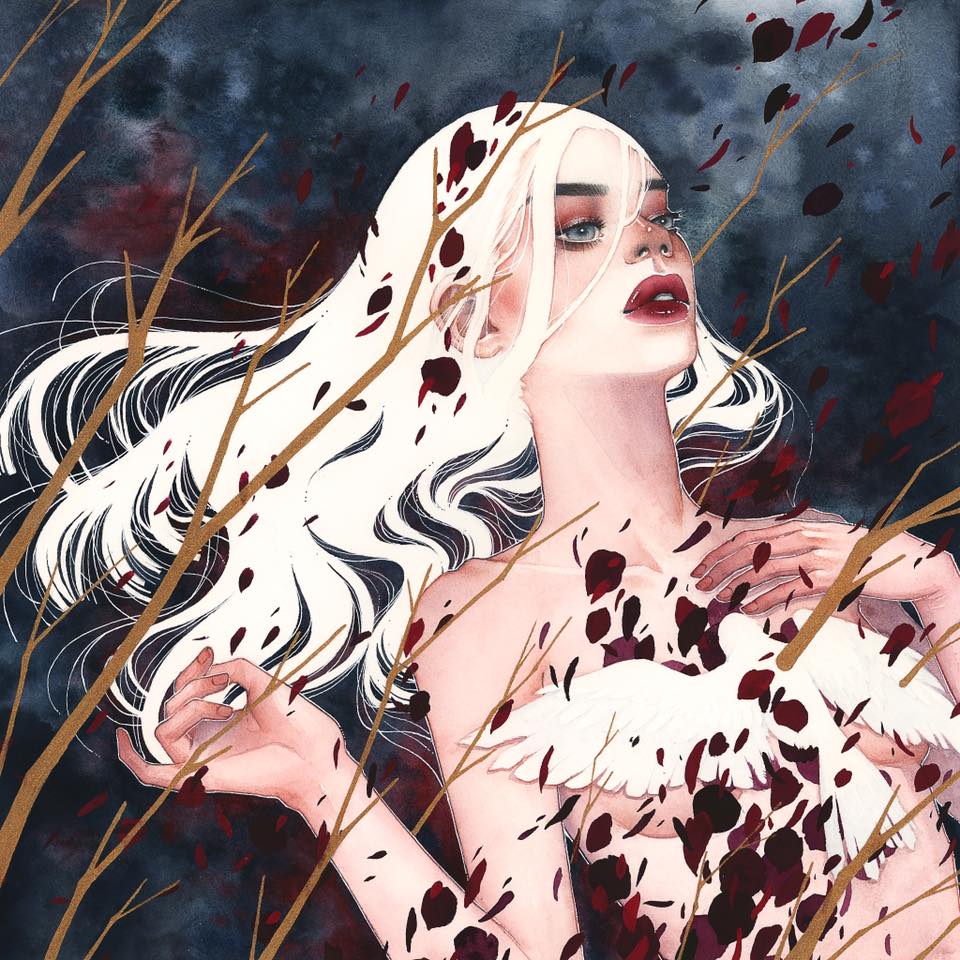 Next up, lets look at where Hieu uses different watercolour techniques

Let the water do its thing

Watercolour isn’t always the easiest material to control – the water has its own plans for your painting. So to some extent, you need to let go of some control and work with the water. He lets it do its thing, and it rewards him for it. The water takes care of blending, of adding flair and adding to that ethereal feel in the textures it creates. 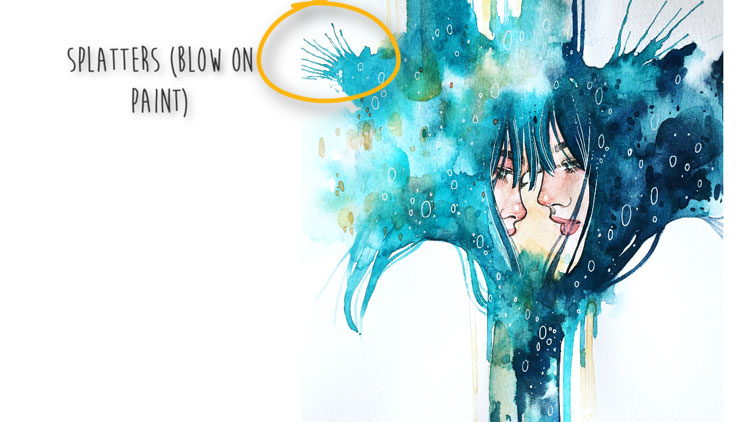 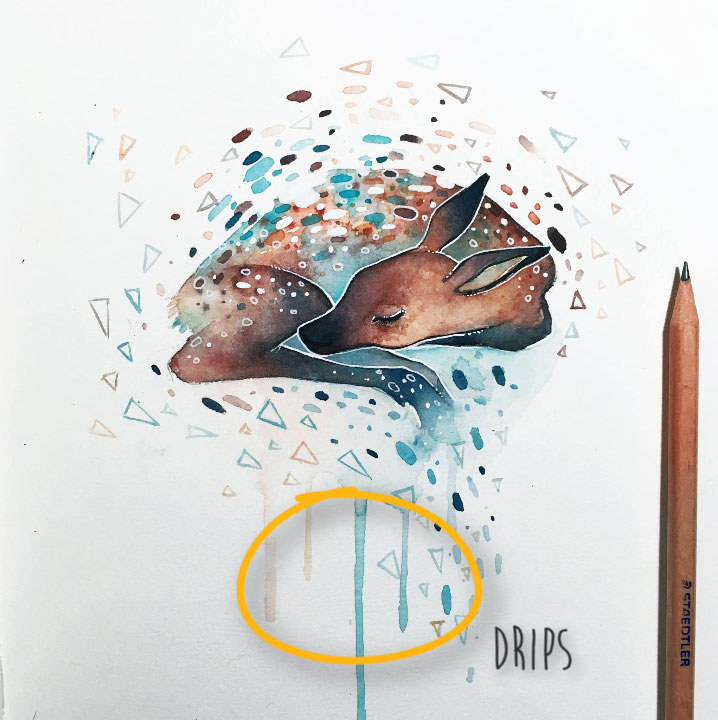 He often looks for something in nature that creates a beautiful pattern to set his subject against, or just abstract shapes.

He emphasises uniformity and repetition in their form, to turn them into a graphic pattern rather than a focal point. I always imagine he is always looking for patterns in nature, daily life, films and so on that he finds interesting.

And he often uses otherworldly things to push that feeling – sea creatures because the ocean is such a strange and magical place – if you’ve seen Blue Planet then you know what I’m talking about. Or sometimes stars in outer space, or even funky spores. 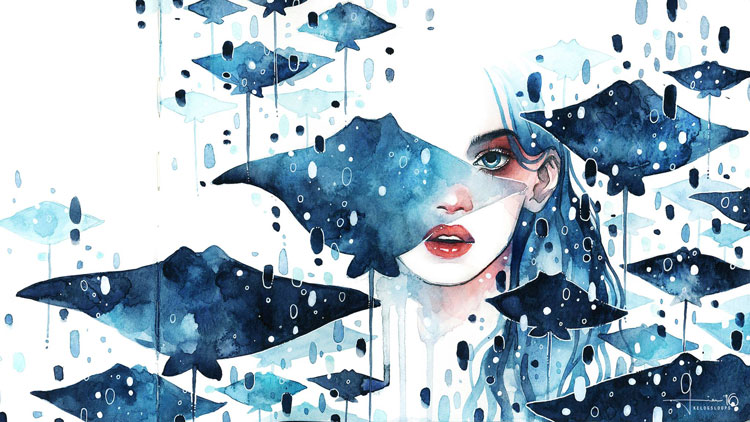 Sometimes the graphic pattern comes in front of the subject too, it’s not just a backdrop. That helps give the sense the character is immersed in this cool, strange world. Other times, the creatures come forward to join the main character as focal points, their colours become warm and saturated, their edges become crisper. And then in others cases, they become metallic, and come even more forward towards us even than the main character. 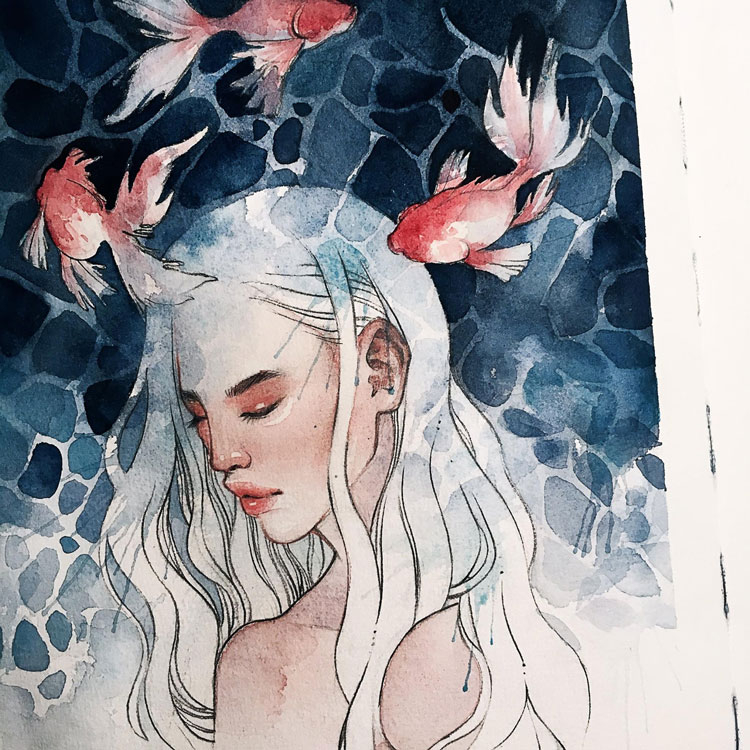 Hieu knows what he likes

Hieu’s favourite subjects to paint, at least in recent years, are girls, sometimes guys with a particular look, some woodland creatures like foxes and deer or sea creatures. So, his main characters, his supporting characters, hair, these are all real things that do exist in this world, and are painted a lot. And he paints them to be completely recognisable and clear. But they feel like otherworldly creatures, rather than down to earth, everyday people and animals, set in magical scenes. He’s using their shapes and characters to create a design, an atmosphere and most importantly, a feeling, and he is happy to break whatever rules to achieve what he wants. He’s completely unapologetic about all of this. And he’ll try all sorts of ideas and experiments to see how far he can push things.

In everyday life, when interacting with other people, we can often worry about being too forceful or bold with our personalities. Like when people say ‘where shall we eat’, I’m often nervous to say what I want, because what if no one else wants it? But your art is somewhere where you can and should be bold, and unapologetic about what you like and what you don’t. It’s your space, so take advantage of it and express yourself. That’s what Hieu’s paintings encourage me to do.

Hieu seems to have gone deep into what he likes, not wide trying to cover what everyone likes. And he goes bold over safe.

It’s worth noting that what I’m talking about in this video is Hieu’s main style for the last few years. Since he’s bold and curious, he’s experimenting with acrylic, oils, new styles and new subjects. 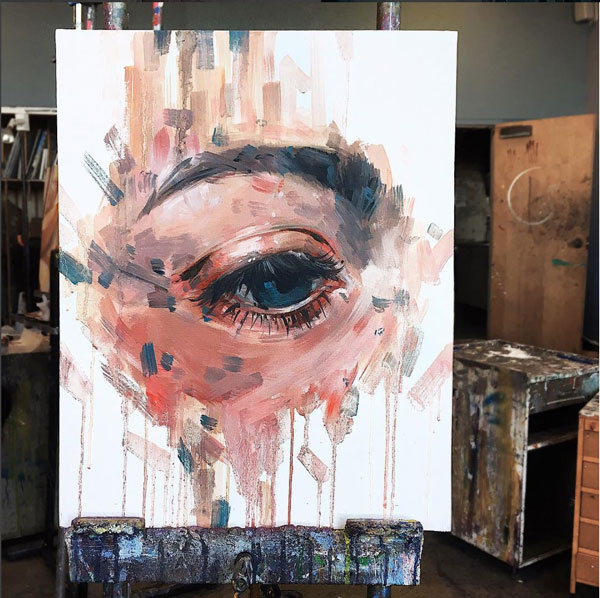 I wasn’t sure where this could fit into the article, but I really love the way Hieu paints hands. 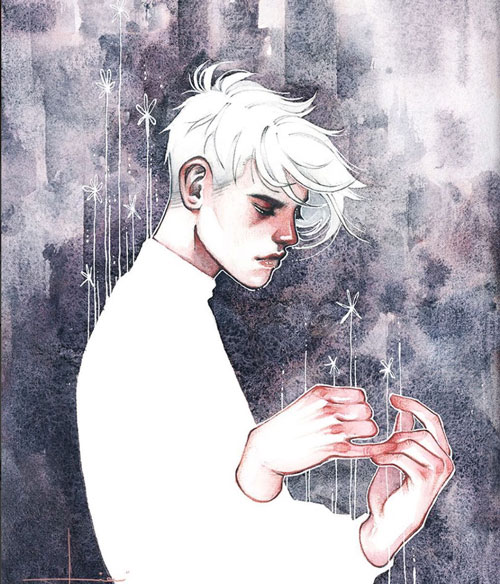 One thing I picked up from listening to Hieu’s interviews is that he sometimes has a full plan, sketches etc. and sometimes paints freely and that can lead to his best stuff. Sometimes methodical, sometimes goes wild and paints on feeling. 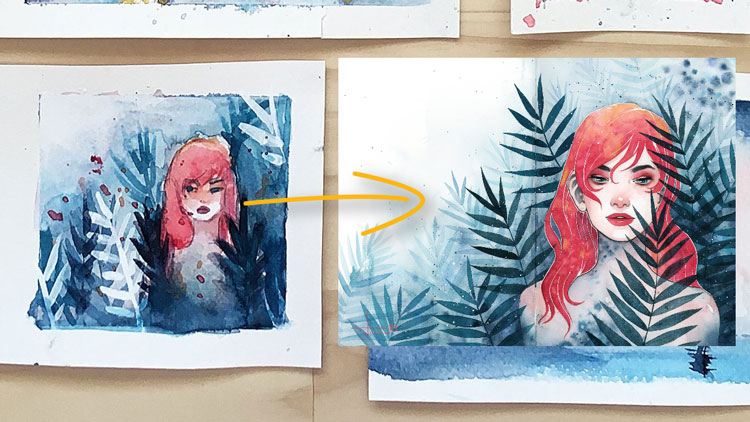 Sketch to final, by Kelogsloops

I hope you enjoyed our breakdown of Kelogsloops, aka the Art of Hieu. Please leave us some feedback in the comments – was this useful, would you like more like this and how could we make these better?