Day 13: How to move past the details

When you’re looking at the figure, you can see so many details and so much complexity. One of the most common struggles beginner artists have is getting caught up in details and complexity that isn’t worth their attention.

But also, it’s goes from dark to light with the dips between the individual ribs. These little dips between the ribs don’t tell you anything big like that. They just tell you a little bit about skeletons maybe and that the model doesn’t have a lot of fat there. As the artist you are bringing attention to areas you draw. Are the individual ribs the things you want to bring attention to? 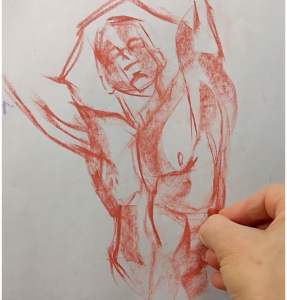 Here’s an example from one person we are helping with tuition. We asked her to simplify the light and dark into shapes and draw them. In her first attempt, it was clear that she was seeing the shapes of the different values, the light and the dark, but still seeing too much complexity and getting overwhelmed by it. 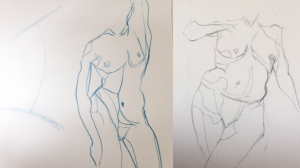 Her 2nd attempts were simpler and she felt it was much more manageable. And then she was feeling confident by attempt 3. 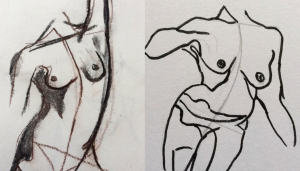 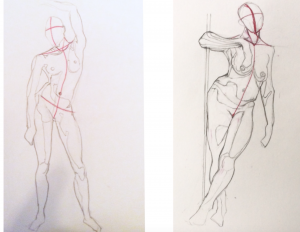 She was able to then go on to creating more nuanced tones the way she wanted to, based on that much simpler starting point. 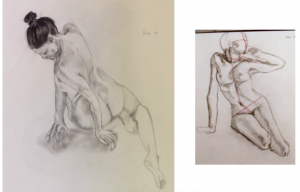 So during today’s practice session, be bold enough to discard any irrelevant details in the shadow shapes and just keep the big stuff that tells you something important. Don’t forget to subscribe, we put out tons of great life drawing content here, and I hope you enjoy today’s CroquisCafe session. See you in the next post!