How to draw like Lane Brown part 1: Master of Light

How can we draw like this amazing artist? In this video / article we are going to learn about Lane Brown and how he approaches light in his figure drawings. This is the first in a 2 part series – the second video is here.

Have you ever seen amazing figure drawings and felt like the artist is casting magical spells – mere mortals like us just can’t do that sort of thing? I’ve enjoyed Lane Brown’s Instagram feed for a long time. To me, he has felt like one of these magicians. So in these videos, we are going to try to break down some of his drawings and understand what makes them great, and what we can learn from them. Let’s make this quality seem achievable to mere mortals such as ourselves! 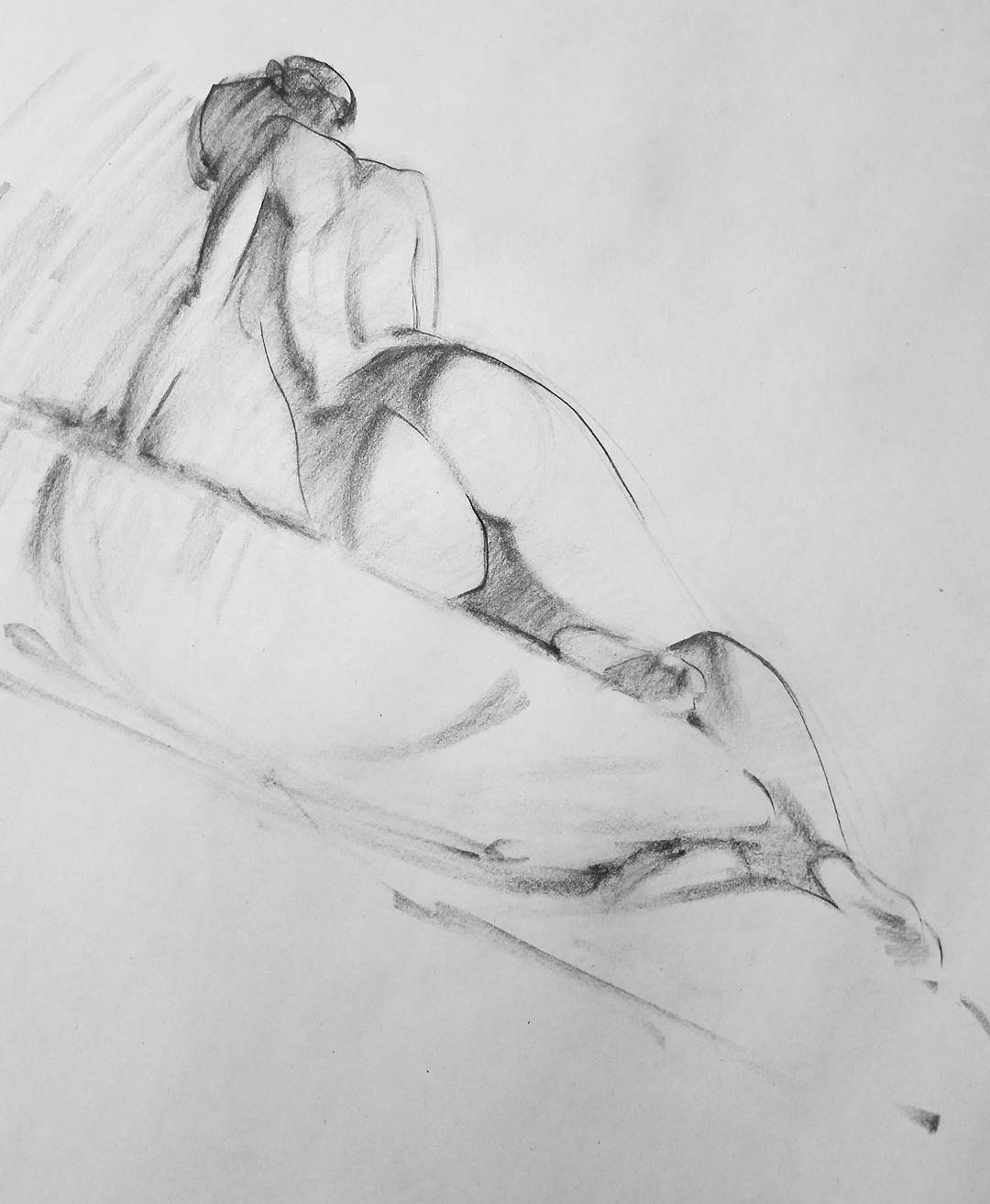 Lane has kindly allowed us to feature his drawings in this video, so thanks to Lane for that. I sent Lane a draft of this video, and he provided some excellent extra notes on his method, which I will insert to the video.

The easiest way to see Lane’s latest figure drawings is by following him on Instagram – @lane.draws

Before we start to analyse these drawing, just a few quick basics:

The first and most important thing about Lane’s drawings is how he approaches light, dark and contrast.

A figure usually has a lot of variation in the values, or in other words in how light or dark each part of the figure is. At the macro level, Lane simplifies all of that variation and nuance into areas of light and areas of dark, often exaggerating the split for dramatic effect. 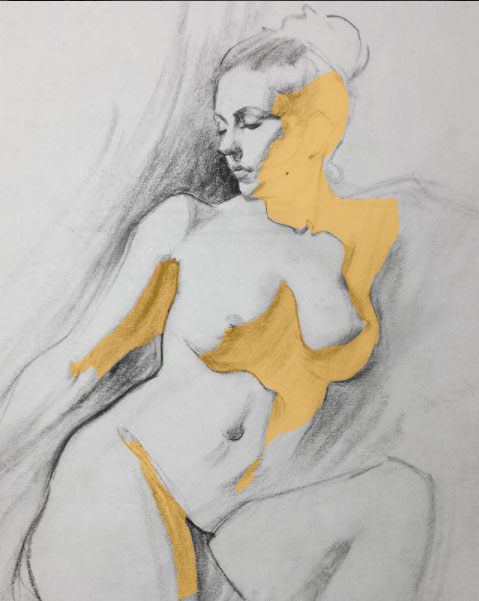 The drawing is broadly separated into light areas and darks

He chooses some areas to become flat, to have no variation in the tone at all, as if they are flat. These areas serve a purpose for the composition – they don’t take attention away from focal areas in the drawing, they are sort of humble. 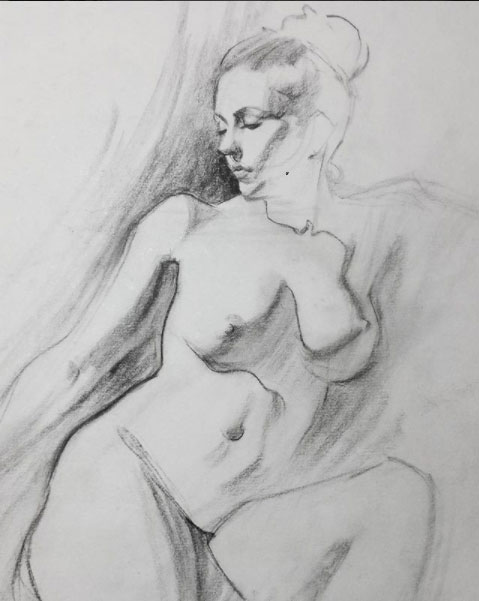 The figure is broadly split into light and dark

But, their shape does a lot of work, showing the viewer everything they need to know about the form of the figure.

Sometimes, for an area of dark tone, the viewer’s eye knows it’s a dark area, so not only does he keep it flat, he doesn’t even make it dark, he leaves it white. 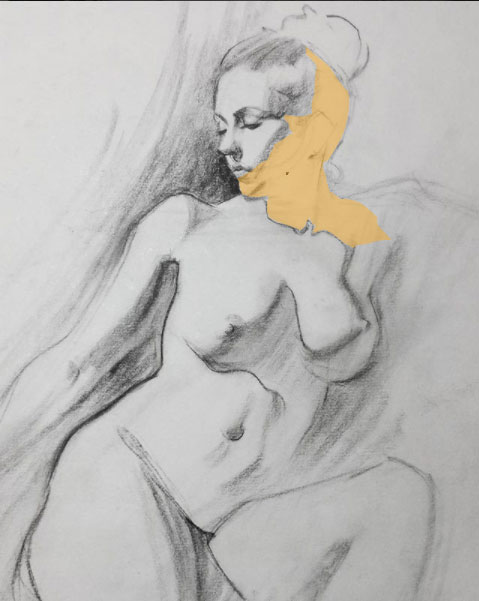 Yet it’s still seen as a shade. He gives the viewer’s eye enough information to explain the form and where the light source is, and so he doesn’t even need to explain in the drawing that the area is dark. For the non-focal point areas, he is minimalist about information he gives, allowing the viewer’s eyes to fill in the gaps he leaves.

He often demarcates or outlines these flat areas with a strong line. The line gives the shape, which as we have mentioned is all the information we need to understand the figure’s form and anatomy. The line also brings out the light areas and makes them pop, because it provides a strong contrast. 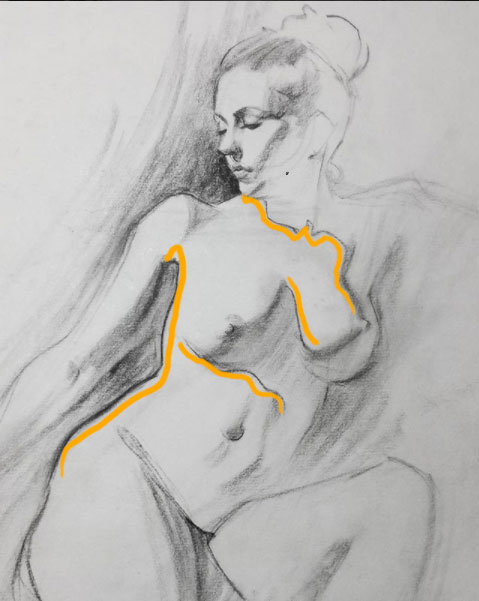 The strong lines contain the light, but he doesn’t always want it to be heavy, so the lines vary in weight. 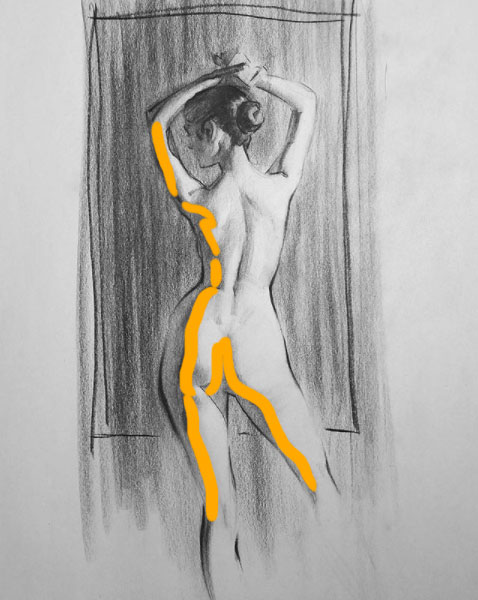 Lane chooses some points or areas to give detail. The eye is drawn to these areas. Sometimes it might be the face, but sometimes the face is not given much. Lane also chooses some areas to be very dark, these provide depth to the drawing. 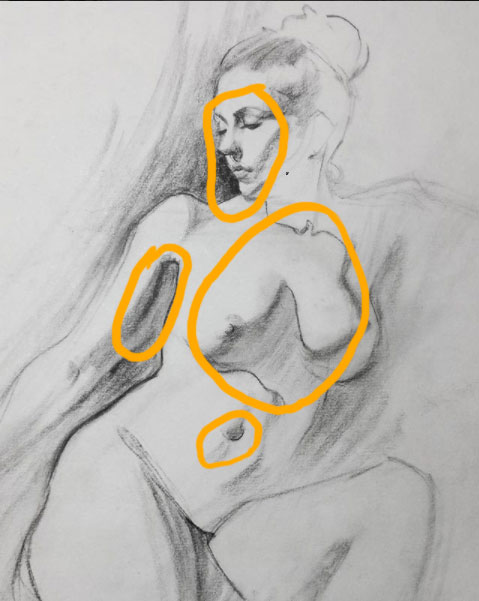 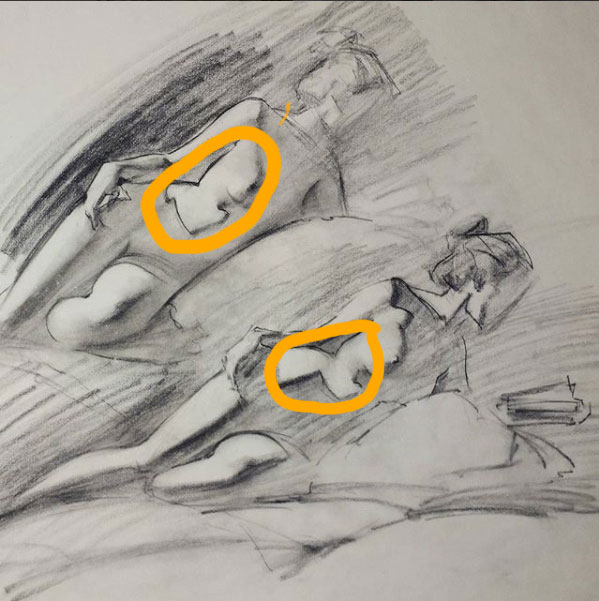 Sometimes, the form is already so clear from his minimalist marks, that chunks of outlines are not needed, allowing that part of the figure to merge into the shadow or light, maybe with just a very subtle indication of the line. He likes to play with line weights, allowing the weight to go to zero in some places.

Lane told me that he did not start out understanding what to include and what to leave out. ‘Early on I did tend to ‘render’ everything more tightly. My eye was not as selective as to which details were important and which were only distracting.’ So we will need to go through more basic levels where we learn to draw everything we see, before we can start to choose what to include. 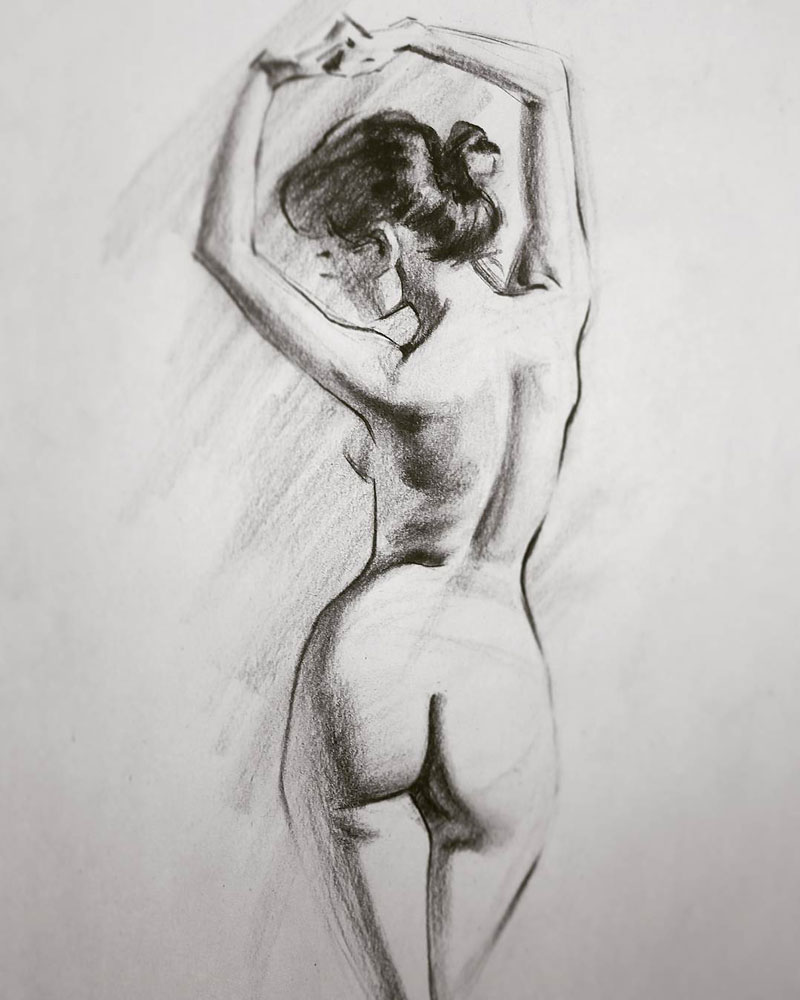 Lane told me that one way he sees the simplified shapes of the light and dark in the figure is by squinting. It’s something a lot of the top artists swear by and something that you can start to add to your arsenal if you aren’t doing it. Squinting helps you simplify the figure into large shapes of light and dark.

Here is a useful quote from Lane’s email to me:

“Light is the ultimate guide. If you’re ever unsure about what to do with a drawing, just follow what the light is telling you (as you squint).  If an edge is bold because there is a light surface against a dark background, then draw that edge boldly.  If an edge seems to almost disappear because it is dark on dark or light against light, then let it disappear.  If you follow the light, you generally end up with a pleasing balance of various edge qualities in a drawing.  It also generates a sense of atmosphere.” 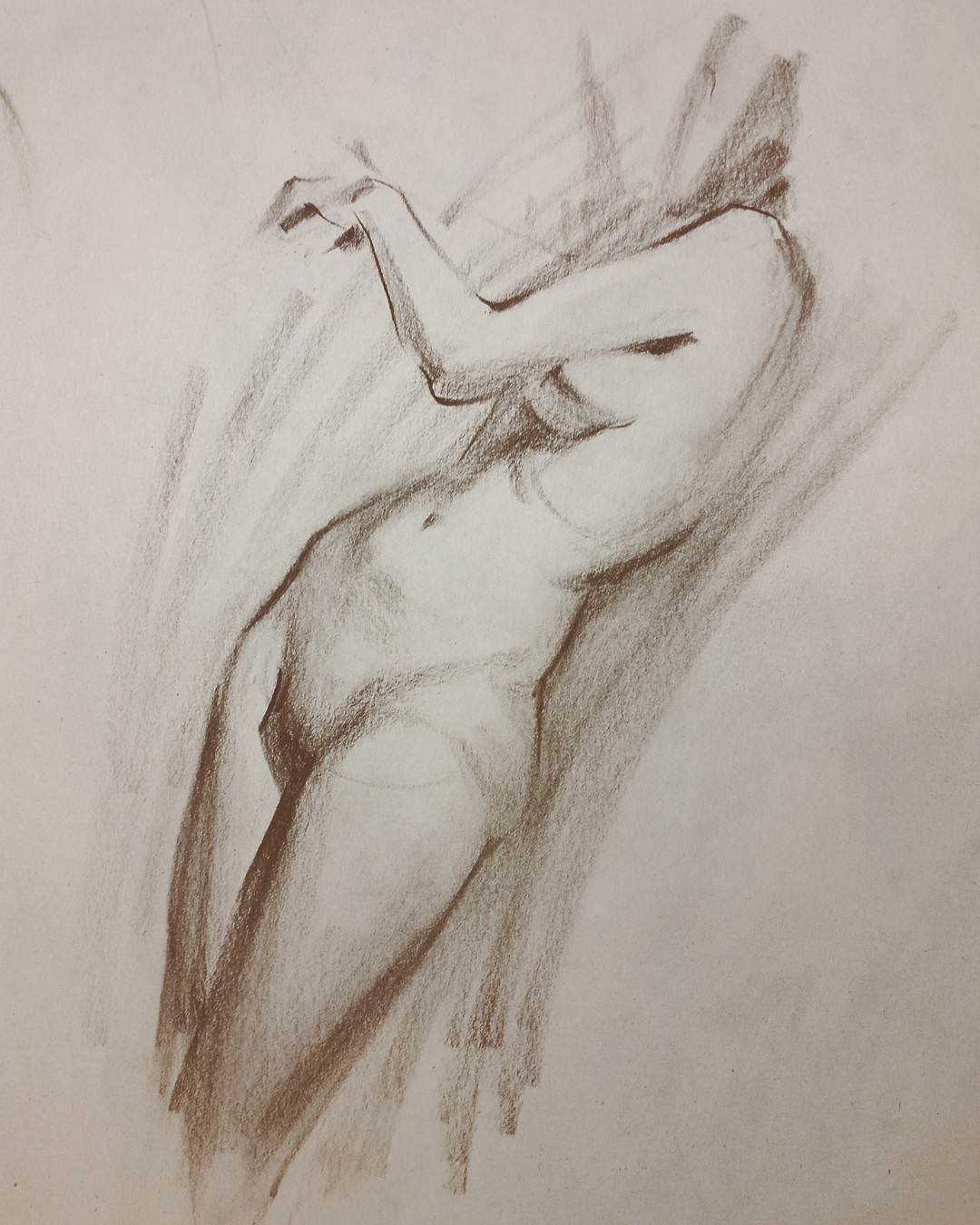 Coming soon is a second video about Lane’s drawings, where we will look at how he achieves his great compositions, how he ensures the figure looks natural and anatomically correct without getting bogged down in detail, and more, so stay tuned for that. To stay up to date with our tutorials and tips, subscribe to our YouTube channel and to our newsletter below. Also, check out our Instagram and Facebook pages. Thanks!