This article contains the transcript of the video above but not the visuals, so I recommend watching the video to see the ideas demonstrated.

Today we are going to cover what I consider the most overlooked topic in life drawing – fat. Most anatomy books for artists cover muscle and bone, which is good because they are the underlying structure of the figure. But fat tissue is hugely important to the surface we’re actually seeing. We’ll quickly look at why we need to learn about fat, where it’s distributed and finally how to draw it.

There are different types of fat, but the topic for today is the fat that really affects what we see – the subcutaneous adipose tissue, the stuff just under the skin. 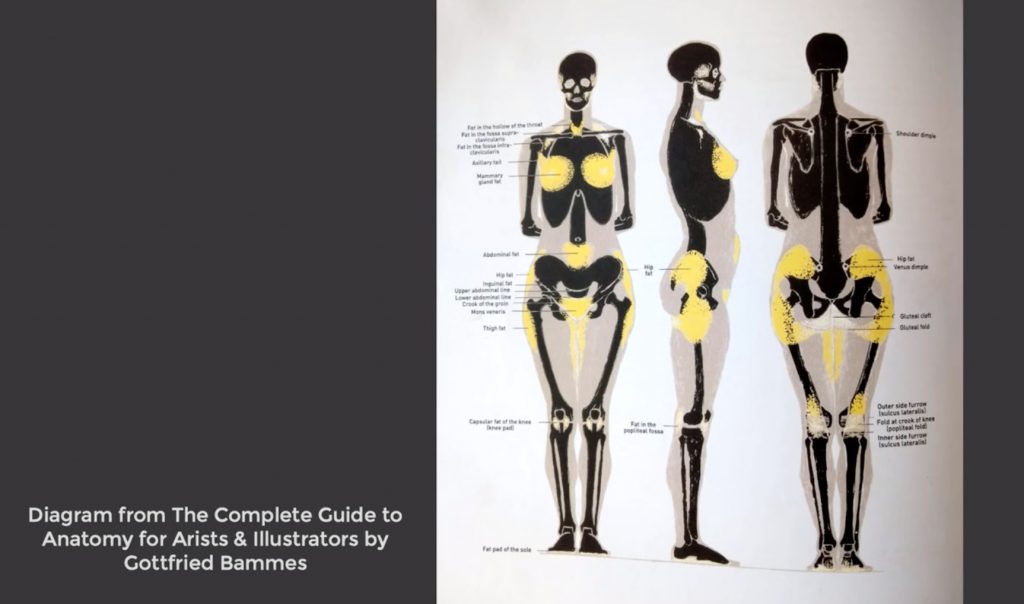 I found when I mentioned to people I was making a post about drawing fat, most assumed that that meant drawing people of a certain size. But everyone has fat tissue and it’ll have a big impact on what we see when we’re drawing anyone, so talking about fat means looking at models of all shapes.

At school I remember my friend proclaimed to us that he had zero percent body fat, and then another friend told him that was dangerous because Bruce Lee died from having no body fat, and he should eat some chocolate immediately. At the time, I fully believed both of them. But within all that nonsense one thing actually was true – it would be dangerous to have zero body fat.

This tissue has various functions. It stores up energy for use later. It’s important for cellular function. It provides a cushion, which is why there is fat tissue on our butts and feet and it pads out joints and organs. On our hands apparently it even helps with forming a grip around things.

For figure drawing, fat is really important for the nice gestural curves we love so much.

Preconceptions are often a hindrance in drawing, so let’s forget fat as a category of people and instead see it for what it is – a major component of everyone’s figure.

In some areas of the figure, fat just softens the underlying structure, creating smooth curves on top of more angular bones and the undulating terrain of the muscles. The contours and tones are just simplified by the fat. Rather than lots of undulations, divets and ridges creating a complex array of tonal shifts, we see larger, simpler and softer shapes. In these areas, the fat squashes and stretches but the overall shape and volume we see is still dominated by the bone and muscle.

In other areas of the figure, there can be enough fat that the fat itself dominates what we see, creating its own rounded and bulging shapes rather than only smoothing out the underlying structure. Fat squashes and stretches depending on the pose. In areas where the figure can bend, especially around the waist, fat can fold in on itself, sometimes creating quite sharp shadows.

Where is fat distributed?

The first thing to note is that where fat is stored varies a lot between different people. It seems to be more individual and varied than muscle and bone. But still, there are some generalisations we can make.

On the torso, fat is often more heavily distributed on the belly under the bellybutton, creating a rounded form. Even on muscular models, you might see clear definition in the abs above the bellybutton, but still see that rounded form under it. Look for differences in the shapes of the shadows above and below the belly button. Here there are slightly harder tonal shifts created by the muscle versus softer and rounded shapes created by the fat here.

There is often also more fat on the love handles. We looked at those in our abs article, because the oblique muscles, the muscles coming down from the ribcage to the pelvis down the sides of the torso. Those muscles create a small bulge just above the top edge of the pelvis, and fat is added to that, especially at the back, creating larger bulges. 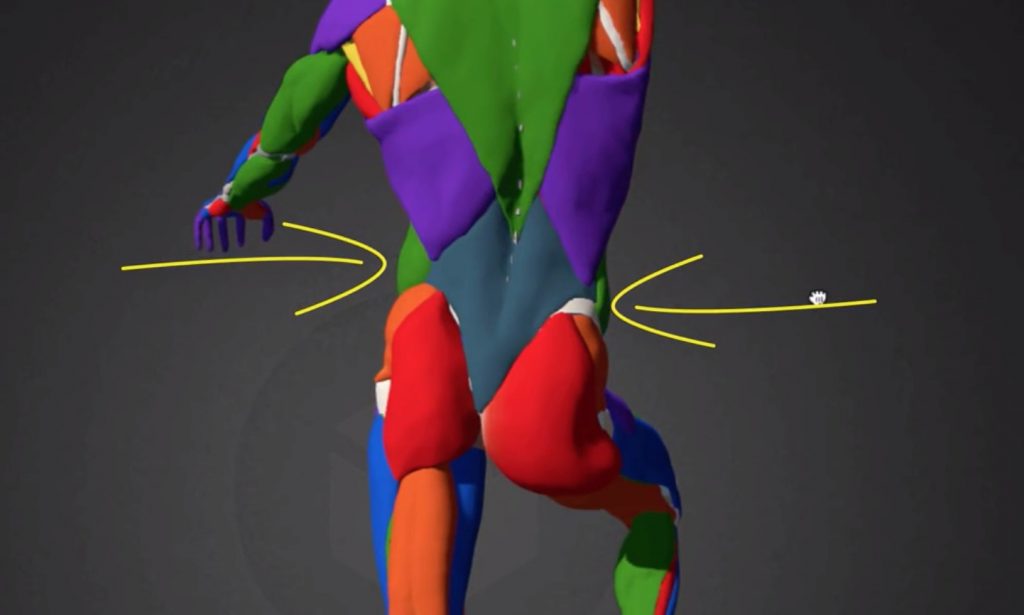 There is fat on the chest. We saw in our chest article that there is often a relatively flat area on the chest in a triangular shape under the collarbones. Below that area, the bulge of the pectoral muscles and the fat really starts. The fat is especially distributed at the bottom of the chest. On women, the breasts can have a lot more fat, and the amount of fat here is not necessarily proportional to the amounts of fat elsewhere in the figure.

There is a lot of fat on the buttocks, useful for sitting on.

There’s a similar story on the legs.

Where the fat isn’t

There is less fat in places like the ribcage arch, the wrists, the bony tips of the pelvis, the collarbones. So where a figure is smoothed out with fat, you can balance that out against some solid and hard structure at these points. Notice here how with the stretched out side of the mid-section, the ribcage and pelvic bone tip jut out a little. So you can bring out that bit of hard structure in your drawing. On the other side, the fat is bunched up, creating bulging rounded folds.

Areas of fat can also merge together. For example, the fat on our love handles and on our bellies under our bellybutton can merge to create a sort of belt shape wrapping around the torso just above the pelvis.

Or the fat on the love handles can merge with the fat on the buttocks, to create a large, smooth volume reaching from the waist down to the top of the leg.

It seems that some people hold subcutaneous fat more in the lower body around the butt and thighs, some in the stomach and chest, some in a more even general distribution around the body. There is actually another type of fat worth noting called visceral fat. It’s the fat held around our organs in the abdominal cavity, under the sub-cutaneous fat on the belly.

How to draw fat

Since the shapes are rounder and smoother, you want to capture that in the edges of the shadow shapes you draw. So here, there is a bone close to the surface, and the shadow created here has a sharp, angular edge.

But here, there is fat under the skin, creating a softer, rounder shadow shape.

Notice how the shadow shape tapers off to a point, helping explain the rounded form. You get the same when drawing a sphere.

That tapering is really useful to explain the roundness of the breasts for example.

As an exercise, indicate the volume you are drawing with lines that run around and up and down the volumes of fat. You can do this with imaginary lines, as if they’ve be drawn on with a marker pen, for practice. They’ll help you to see and imagine the volumes.

Since our gestural lines are often best when smooth and sweeping, fat can be helpful for gesture drawing. Dramatic lines that come inwards and then sweep outwards are great. We’ve talked before about looking for curves that complement each other and gain momentum. Rather than symmetrical curves, you can emphasise curves that taper together, flow like a river together or cascade into each other.

Drawing figures is a balancing act. There are simple big volumes versus details and smaller features. There’s hard structure and solidity and then there’s sweeping gestural curves. Understanding that balance is partly about seeing the figure as built from the angular, hard skeleton, the simplifying, smooth and soft fat with the muscles in the middle, creating both hard, rigid shapes and smoother, flowing shapes.

The models in this video of all shapes and sizes are brave enough to bear all so that we can learn from them. We owe them so much for having the guts to do that, so thank you to these great models.

To get our FREE guide to avoiding the common pitfalls with learning figure drawing, Life Drawing Success, click HERE