How to Draw Chests – 5 SIMPLE LINES of the pectoral muscle

We are going to look at how to draw chests. Our aim is to keep it super simple and practical, so that it’s doable and really helps your drawing. You tell us if we succeeded!

This isn’t an anatomy video really, but there are some bits of anatomy in it wherever it’s going to be really useful. It’s about the lines and shapes to look for when drawing, that will help you see more clearly and will have an impact on your drawings. First we’ll look at the chest when someone’s just at rest with arms by their sides. Then we’ll look at how the shapes and lines you see change when the arms are doing different things.

The big muscles of the chest are called the pectoral muscles or the pecs for short.

Let’s look at these muscles at rest first from the front. They have a roughly pentagonal shape. The top edge runs along the collarbone. The centre edge runs along the breastbone. The bottom edge runs across the ribcage. Then here it comes up to attach to the bone in the arm. This last line is made by the deltoid muscle we looked at in the shoulder video. The pec disappears under that. 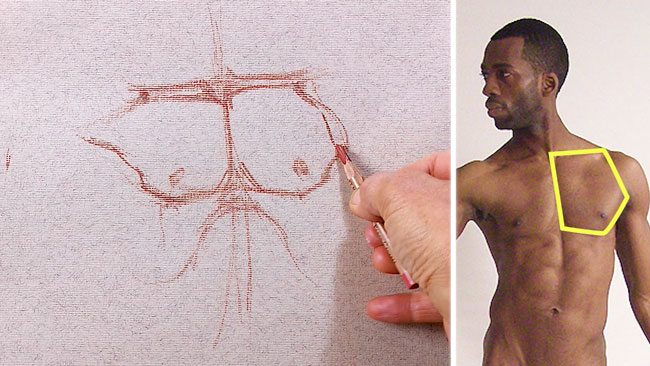 So roughly speaking, from our point of view, there’s these 5 sides. They won’t always be clearly defined, so don’t be alarmed if one or two seem to disappear!

With women, as we’ll see later, these two lines on the bottom edge become a smoother curve because of the fat tissue in the breast, and actually with men it’s very often more of a soft curve too.

The pecs don’t rest on a flat surface, they are on the ribcage. We have a lesson on that shape, but let’s take a quick look at it from the top. It is a little flatter here in the middle, near the breastbone, but curves out more as it gets closer to the sides. 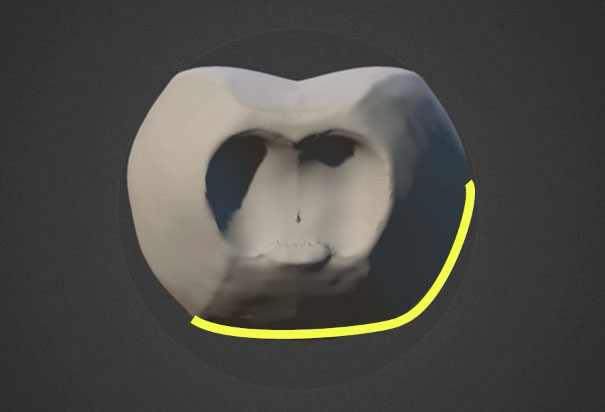 For someone standing up straight, the front is not totally vertical, it’s sloping gently outwards. 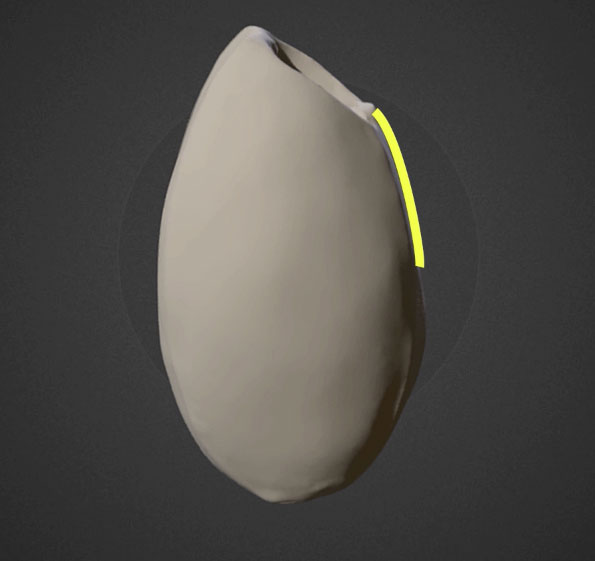 Collarbones
Collarbones move up and down as the shoulders are raised and lowered. They move around independent of the ribcage. So if the shoulder goes up and the ribcage stays in the same place, our pentagon is going to stretch up with it.

The arm
Moving the arm around is the main job of the pecs, so they have to attach to the bone in the upper arm. They attach a little way down the bone, and not to a single point but across 4 or 5 centimetres. When the arm raises, this point is going to be pulled upwards, stretching the shape again. When the arm comes forward, this edge will stretch forward with it.

Ribcage
The ribcage isn’t going to move around a lot so the centre line and the bottom edge of the pec aren’t going to move as much. What is going to change is how much the pec sticks out. When the arm raises, the bit that protrudes here is going to flatten out. So that will affect the shadows and shade you’ll be using.

The flat triangle
Just under the collarbones is a broader triangle of relative flatness. From these two sides, things start to curve outward more. I find it’s often really useful to lightly draw this triangle to understand the relationship between the pecs on each side.

The little diamond
At the top of the arch of the ribcage, where it comes up to a point, is fairly high and actually comes up between the bottom edges of the two pecs. It’s not below them.

A little diamond shape might be created between the pecs and abs.

In our ribcage lesson, you can learn more about the ribcage shape overall. Just to repeat one thing: the arch on the front of the torso you can see is either going to be the sharp arch of the ribcage itself, or on a more muscular figure and depending on the pose, it might be a shallower and more curved arch made by the abs at the top sticking out.

Muscle and fat
Towards the bottom of the pecs there is more fat tissue on both men and women. It provides some extra volume and also smoothes out the curves. The transition from muscle to fat is generally quite smooth, so there usually isn’t a line there, but it might be quite clear when the muscle is really tensed up.

Nipples
The nipples aren’t in the middle of the chest, but off to the side a bit. But keep in mind that people’s nipples can be all over the place, so they’re not really reliable landmarks telling you about structural things. It is still useful to check the angle of the line between them when drawing though, but just don’t expect that angle to always tell you a lot of structural things about the rest of the torso.

So when you have a pose with the chest visible, have a look for those 5 lines. Is the arm position making the lines of the muscle stretch? Has the lower edge been flattened because the muscle is being stretched out, or maybe you’ll see it’s softened and curved by fat. See if you can see that flat triangle -s. Notice how the shape is not flat, but is resting on top of the ribcage which curves back as it gets to the sides of the torso.

Hopefully, instead of that overwhelm when looking at a figure and seeing so much information, you can look for just these few things.