How to achieve BALANCE in your figure drawings – 3 easy steps

Most of the advice you’ve heard on this has probably either been impossible to implement or just wrong.

A lot of figure drawings don’t have the figure balanced, I’ve done millions of drawings like that, and it feels weird for the viewer. So let’s get your figures balanced. The really cool thing is that often being confident with these ideas is also going to let you capture gesture more effectively and not have stiff drawings too. 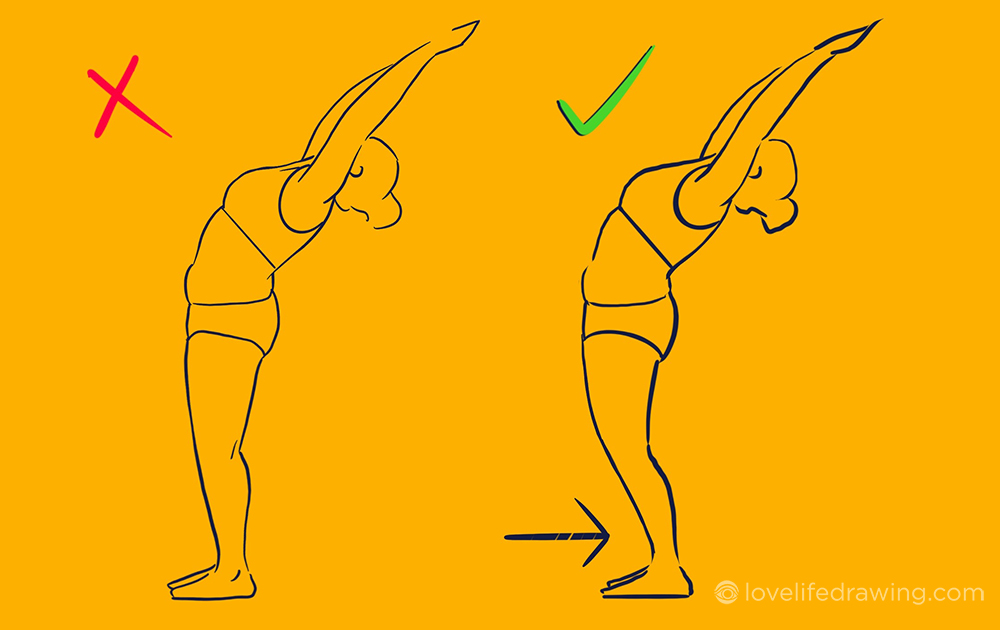 The most common advice around this is when drawing a pose, to locate the centre of gravity, bring down a vertical line from there, and orient your figure around that. That sounds really logical, because that is a good way to think about how balance works, but it’s not that useful  – because where is the centre of gravity? The standard advice for finding it is wrong, but fortunately there’s a simple solution.

Most of the time, rather than the centre of gravity, we really care about the line of gravity. Rather than one specific point, we really just need the vertical line around which the weight is distributed, which is cool because that’s a bit easier.

You might have been told to create a drop line from the nose, because the weight will be centred around that line. Or from the ear, or from the middle of the collarbones, just behind the bellybutton, the anterior side of the S2 vertebrae and so on. They are all useful and they are all wrong. They are useful because using any type of vertical drop line is a great start, especially if that drop line passes through a clearcut landmark where you have no doubt where it is. But they are all wrong because the line of gravity doesn’t necessarily pass through these points. 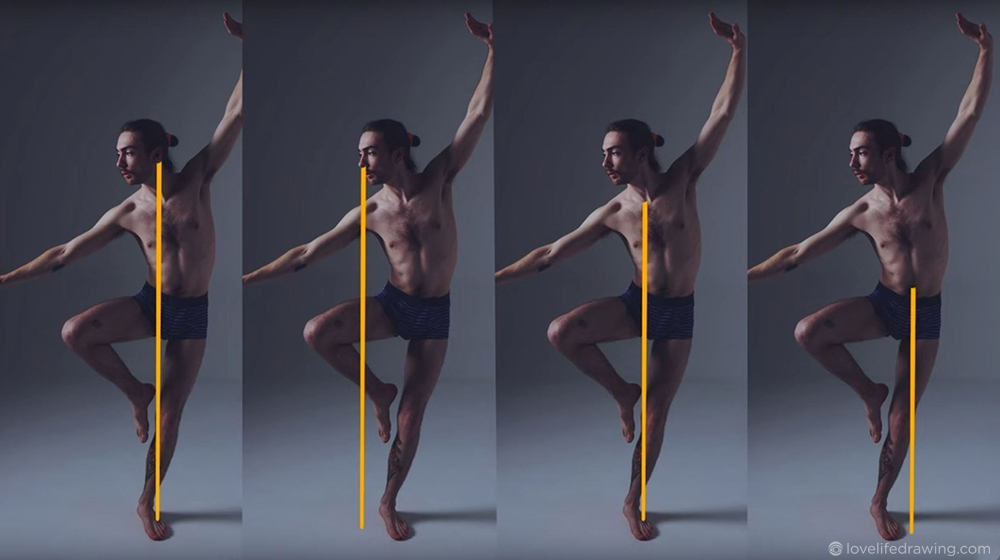 If it’s a balanced standing pose, the line of gravity won’t be outside the person’s feet. In the images below, you can see that if each of those points was right, the person would be falling over – but they’re not. No single point can consistently be right. The centre of gravity moves in different poses. 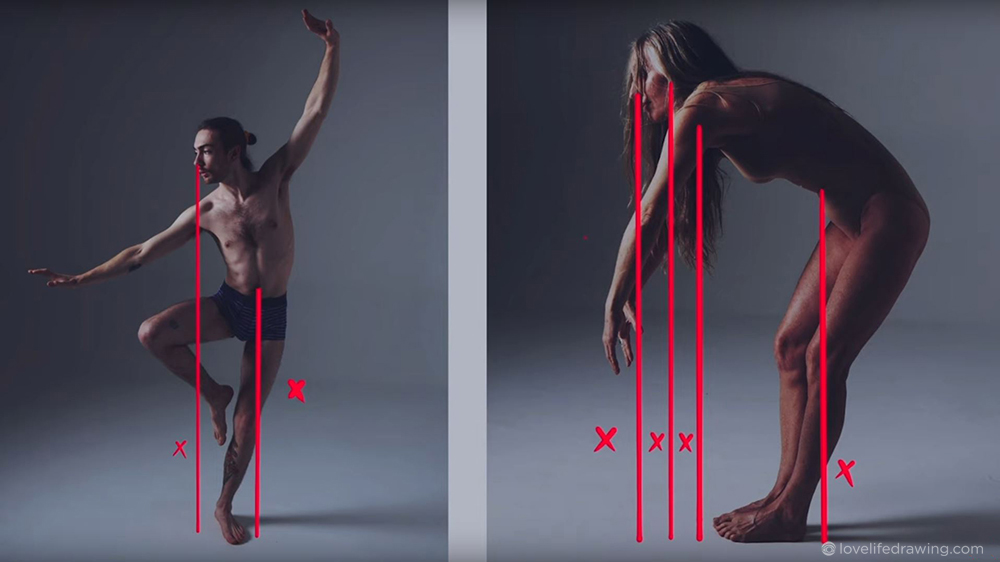 Move a leg, shift the hips, everytime, the centre of gravity shifts too. So to find the centre of gravity, you have 2 options: we can either chop the person up and weigh each body part, and then do some complex maths, OR you can just do the super simple way I’m going to show you. I don’t know about you but I think it would be really awful to have to do any maths, so let’s try the easy way.

If the weight is mostly on one leg like in the figure below, then the line of gravity will pass through the supporting foot. It could be more towards the front or the back of the foot, but somewhere in that area. So you can bring a vertical line up from the weight bearing foot, and see what is on each side of that line. 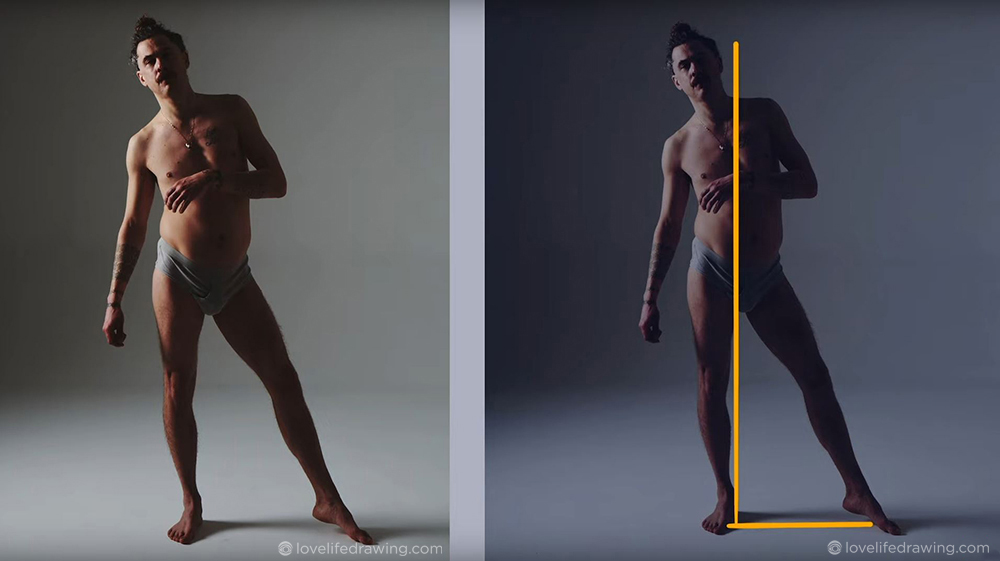 Standing on one leg

So in Christy’s pose below, we have the weight on one foot and we bring up a vertical. His leg is raised, so instead of being a support, now it’s just a weight, and it’s on one side of the line. His arm and head are too. To compensate, he’s shifted his torso out a bit to the other side. There’s a lot of weight in the trunk, so a whole leg sticking out this way could be offset by a smaller shift the other way in the torso. Because his torso moved this way, his weight bearing leg is now on this strong diagonal. 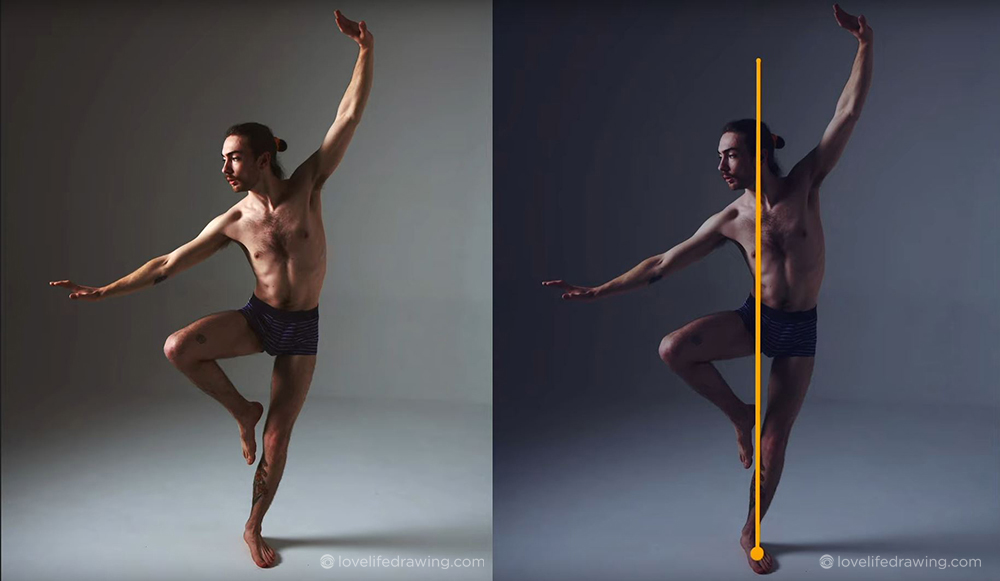 If we drew this pose without thinking about these things, we could easily off-balance him. If we didn’t have that leg on the diagonal in our drawing, there would be a lot on the left hand side of the line from his foot, he’d be falling over. If we didn’t have that bend in the torso and bring his head and upper torso back to the other side of the line, then there would be too much on the other side and he’d fall over. So as you get confident with this line, you can also start emphasising interesting things about the pose, and so this idea of balance ties in closely with gesture. 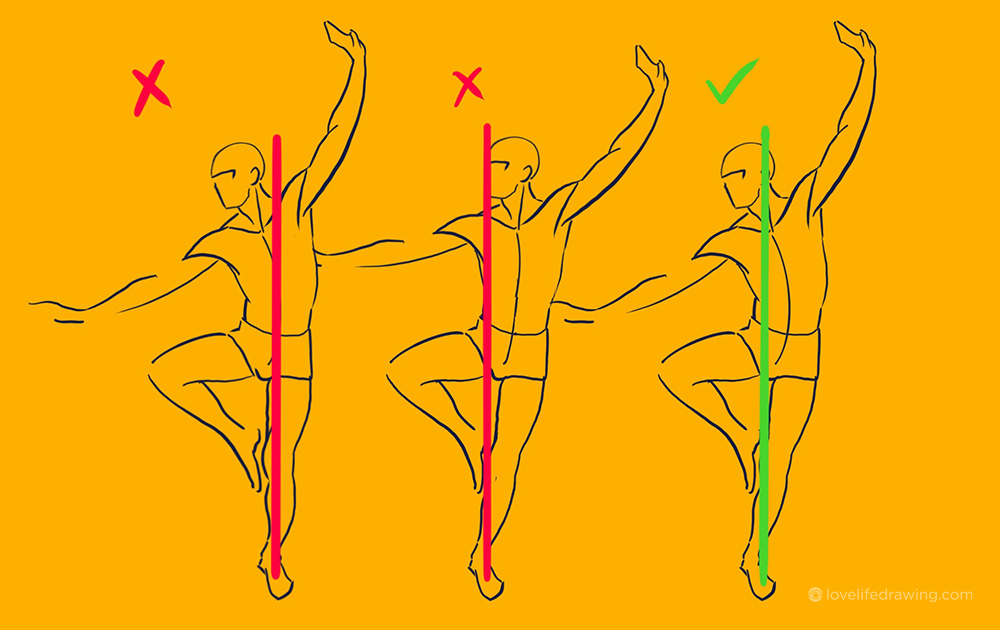 Ok so standing on one leg was fairly simple, what about when the person has both feet down but the weight is shifted to one side. Quite often, the weight is shifted almost entirely to one leg, like in this pose below. How can you know? You can imagine doing that pose and think about whether there would be any weight on the other foot – would you easily be able to lift it up? You can often even see there isn’t much tension in that leg. 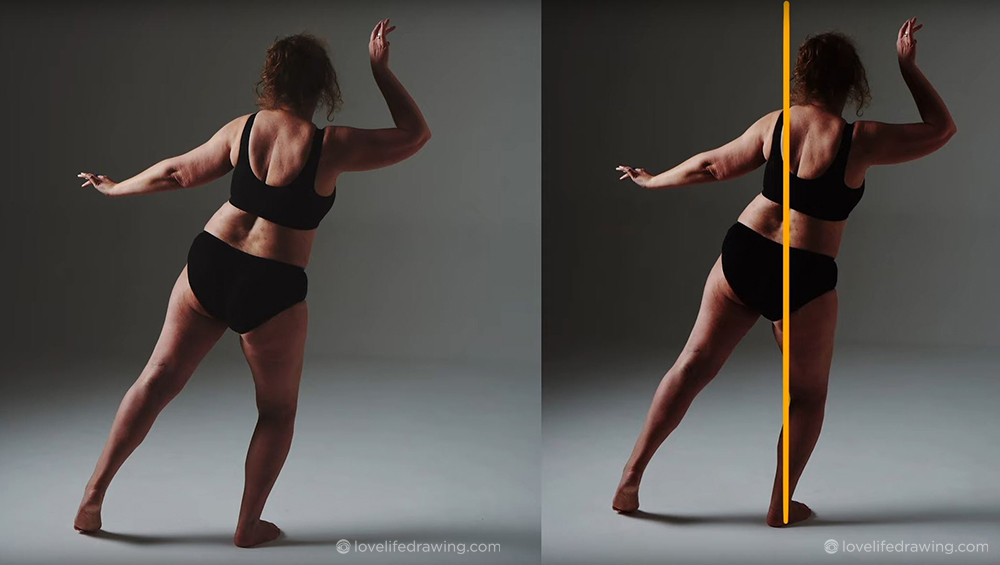 So here, even though both her feet are down, we can treat it the same as the one leg poses with a vertical from that weight bearing leg. I reckon in this pose, this leg is more of a weight than a support. When we draw this pose, we want to ensure we orient her forms around this vertical.

Draw what the figure is doing to stay balanced

So here’s another one like that. The weight in this pose below is really shifted over this foot, and we can use a vertical from this foot to establish balance. 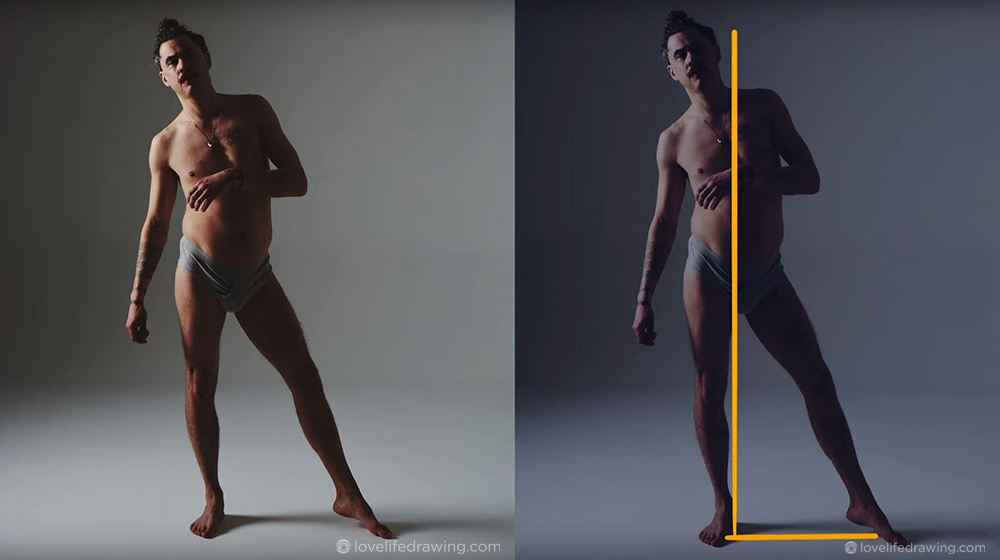 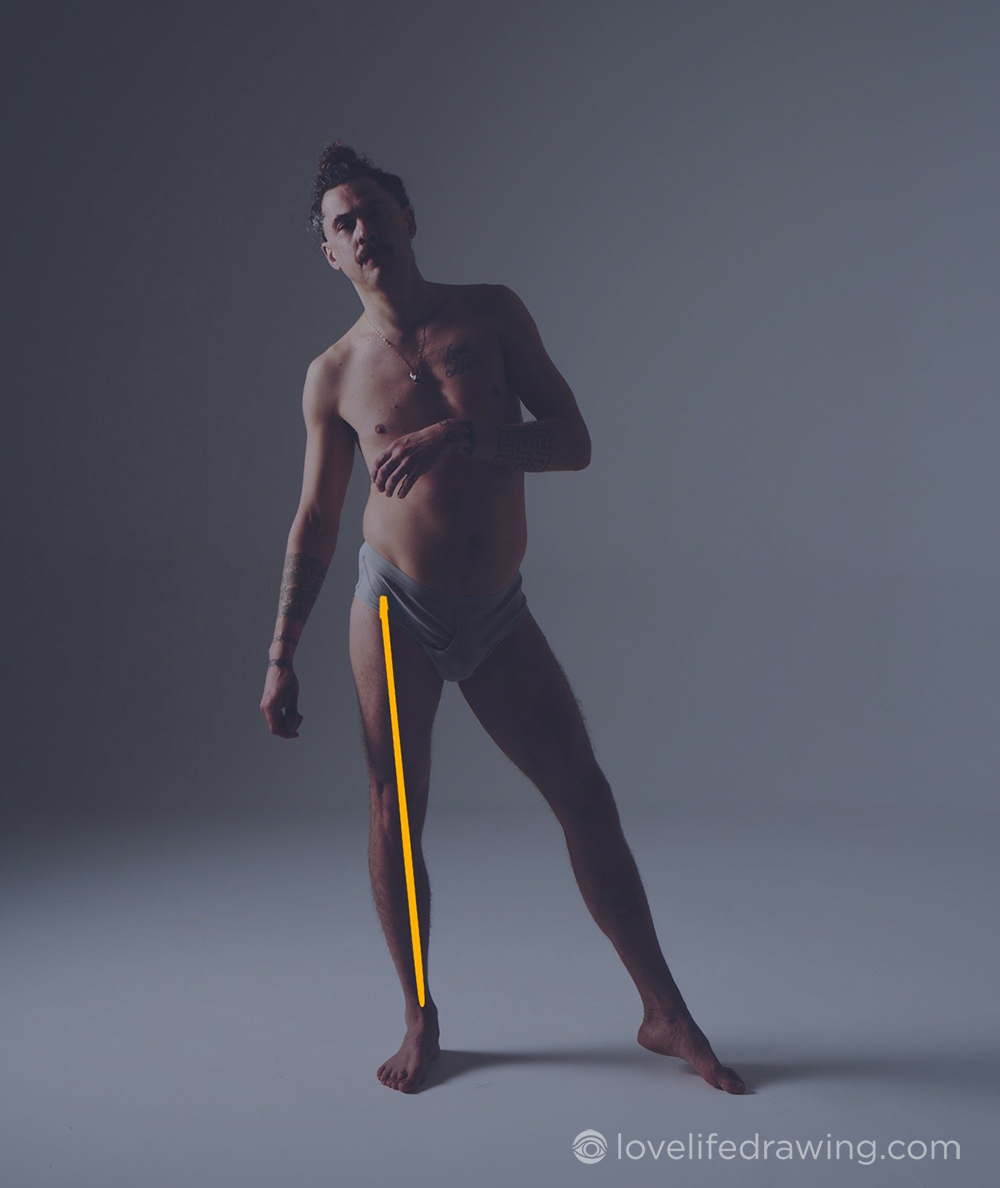 In this pose, this side of the pelvis is pushed up by that weight bearing leg. That doesn’t always happen, but it’s really useful to draw that when it does. This has knock-on effects on the other leg and the torso. So now, because the hips shifted one way, the other leg has further to go to reach the floor. The person might bring this foot in, in this case, the foot is staying where it was. So to reach the floor, he has to point his foot and only the toes touch. Also this side of the pelvis is angled down which helps too. 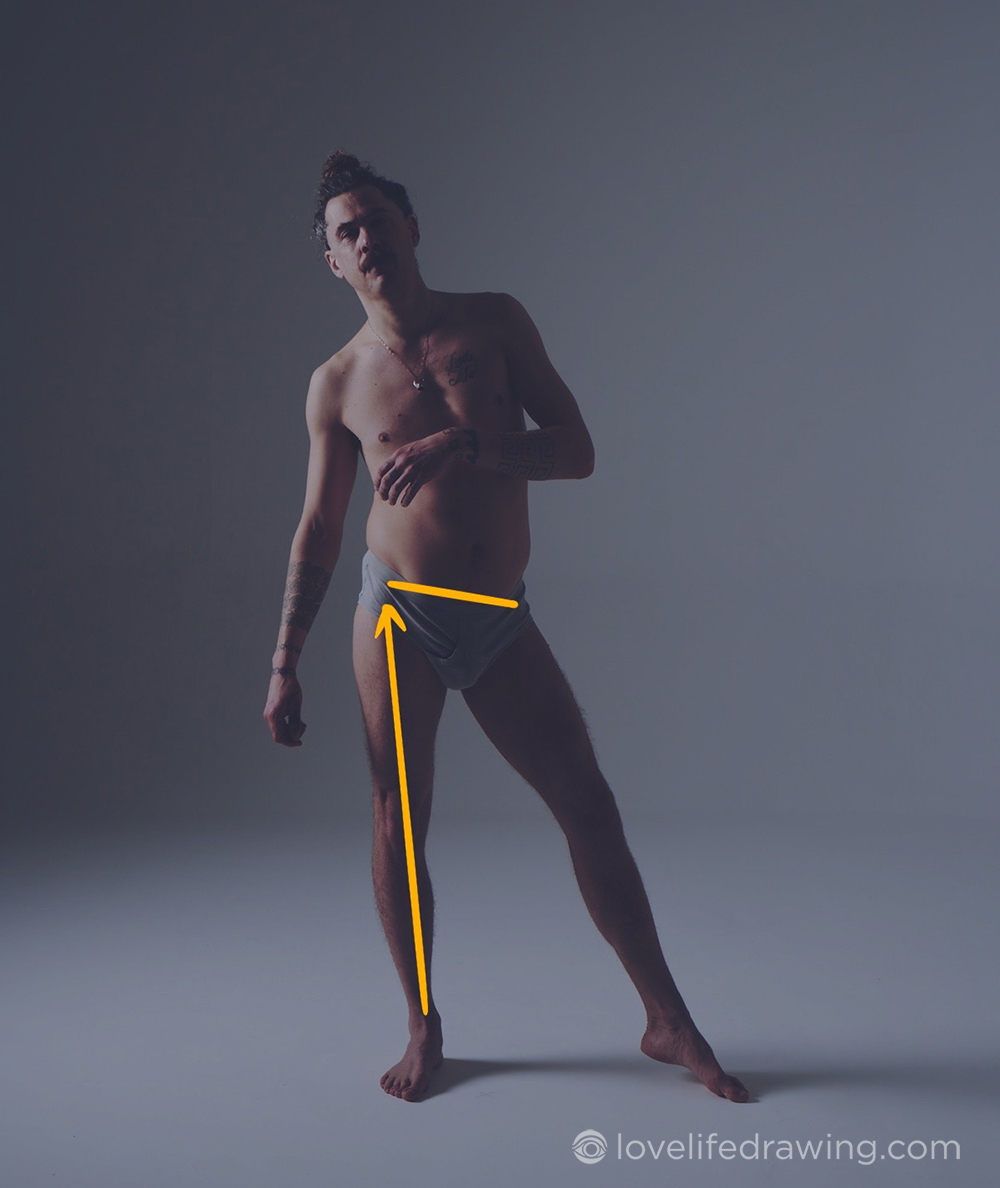 Because of the angle of the pelvis, now the lower torso is going in this direction, as you can see in the annotated pose below. But if it keeps going in that direction, the weight won’t be over this leg any more. 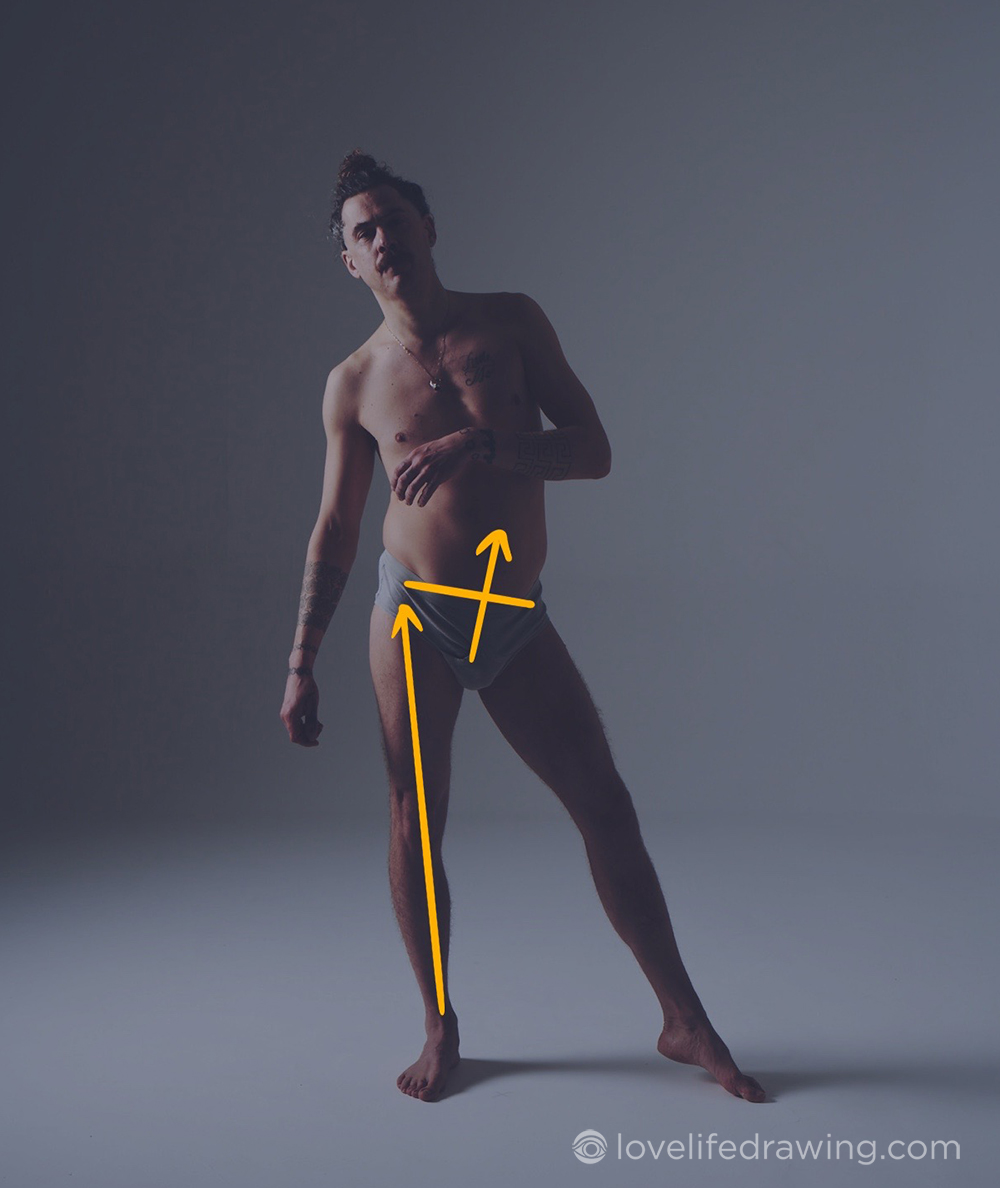 So to keep the balance on that leg, the torso angles back. This means a bend in the torso, a squash and stretch, which I’ve marked out below. 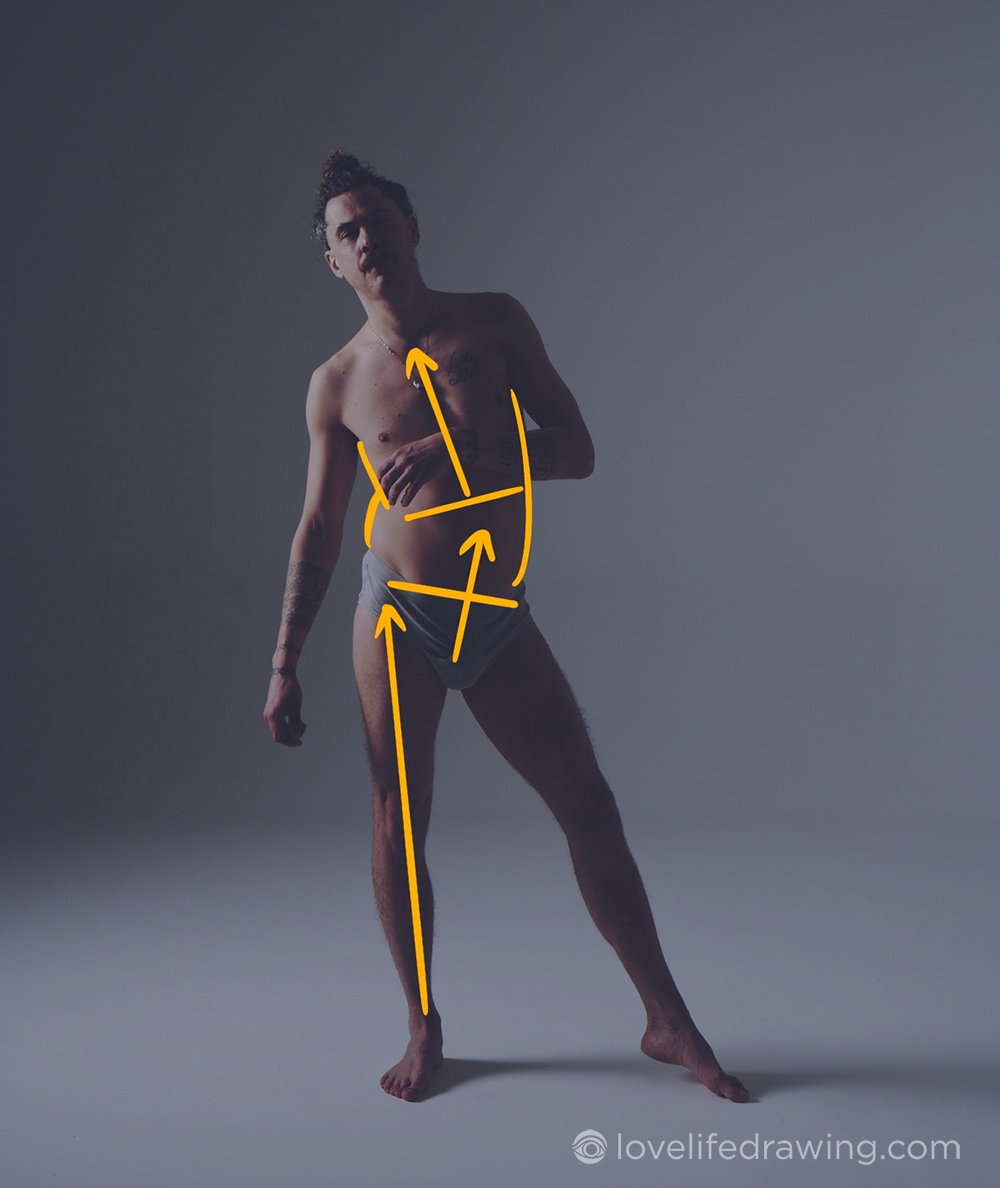 When the feet are next to each other, then again you can look at that vertical coming up from the feet.

Here’s a pose from the side where the feet are together, so the weight needs to be over the feet. She doesn’t feel like she’s really back on her heels or on her toes, so i’m going to guess her weight is mid-foot. 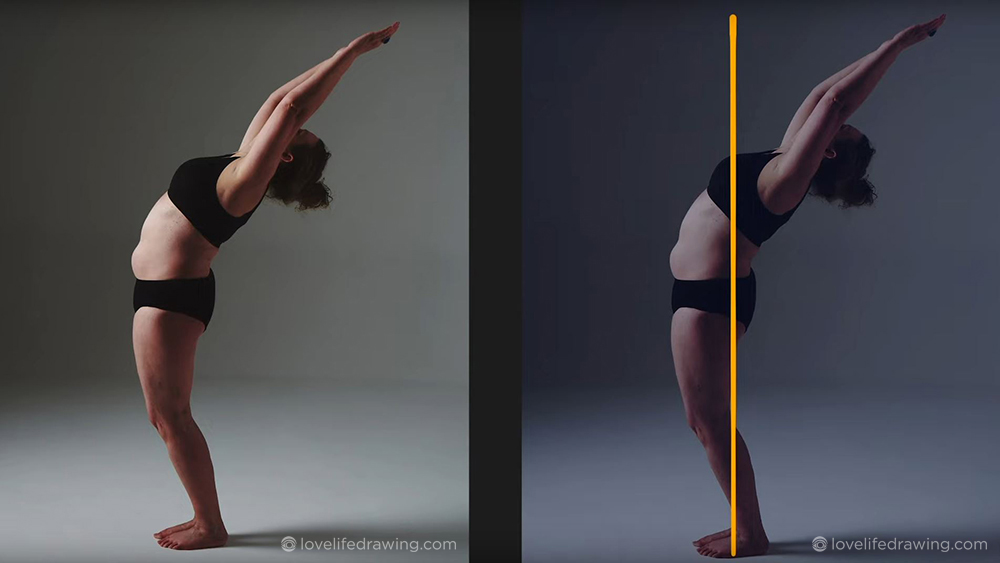 It’s super useful to see this line and think about the balance around the line because so many people will see the backwards lean of the torso and draw that, but will miss how the pelvis is pushed forward to counterbalance that.

The more the person is leaning back, the more their hips will push out the other way, and you want to get both movements to keep the balance. 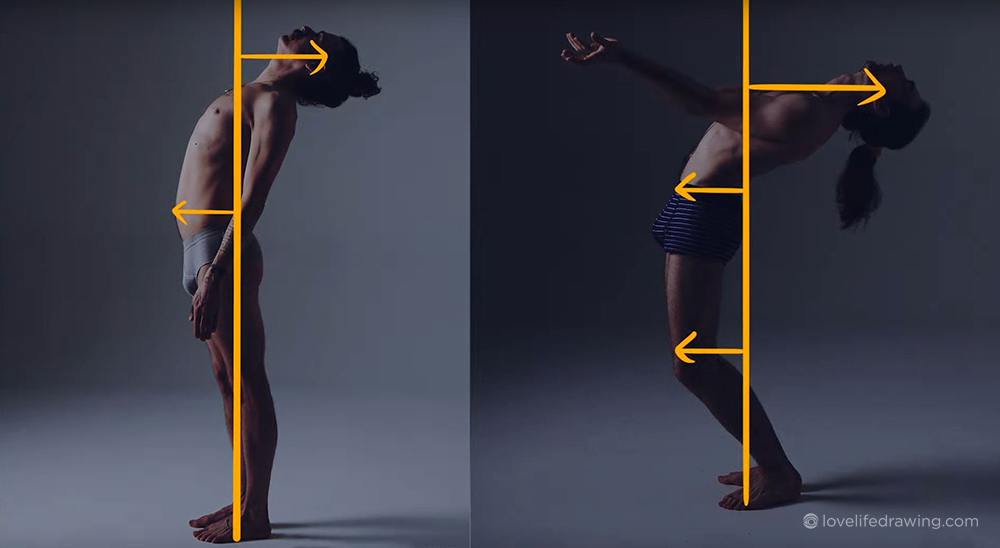 If the weight is distributed across both feet that are spread apart, then it’s usually way easier to make the pose feel balanced. The line of gravity just needs to fall inside the two feet, and you might get it a bit wrong and it still won’t feel like the figure would fall over. In that case though, it’s super important to get the ground plane right. 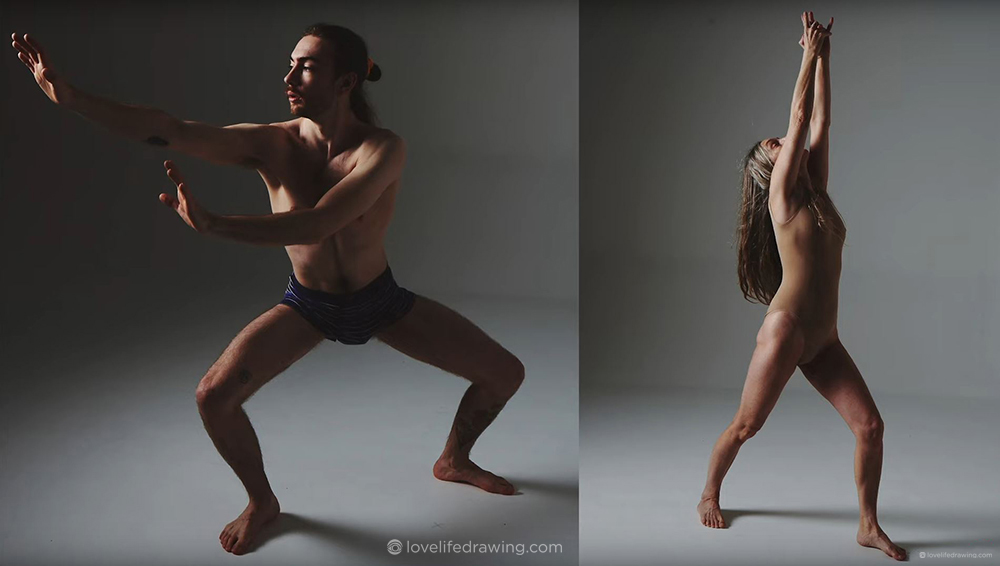 If one foot is further back, then there’s going to be a diagonal between the feet, you want to capture that. If you lose that diagonal, which is really common, then it doesn’t feel like the person is standing on real ground. That diagonal will create a negative space shape under the legs which can also be useful, as I’ve shown below. 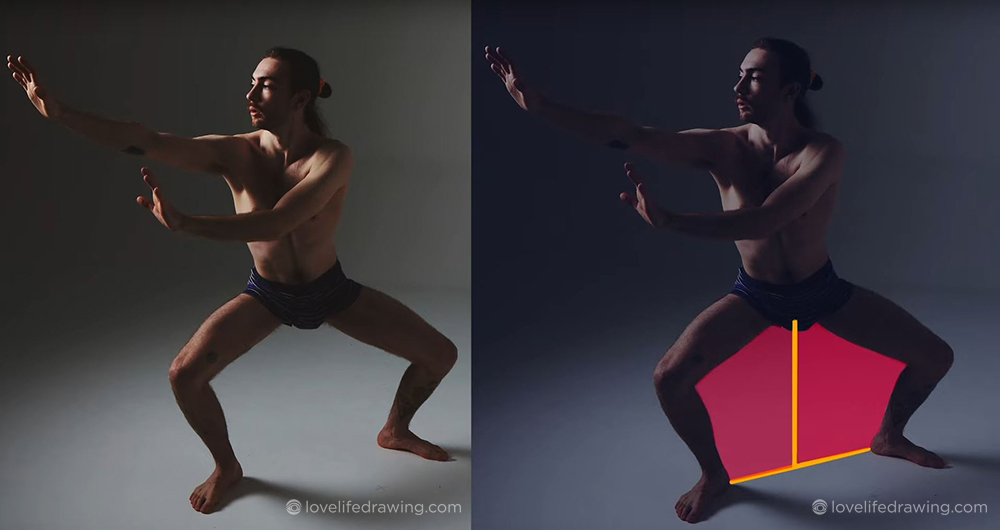 When the legs are apart, it can be useful to look for the vertical lines down from the crotch and from the middle of the collarbones. This way, you relate the top and bottom of the torso to the legs. 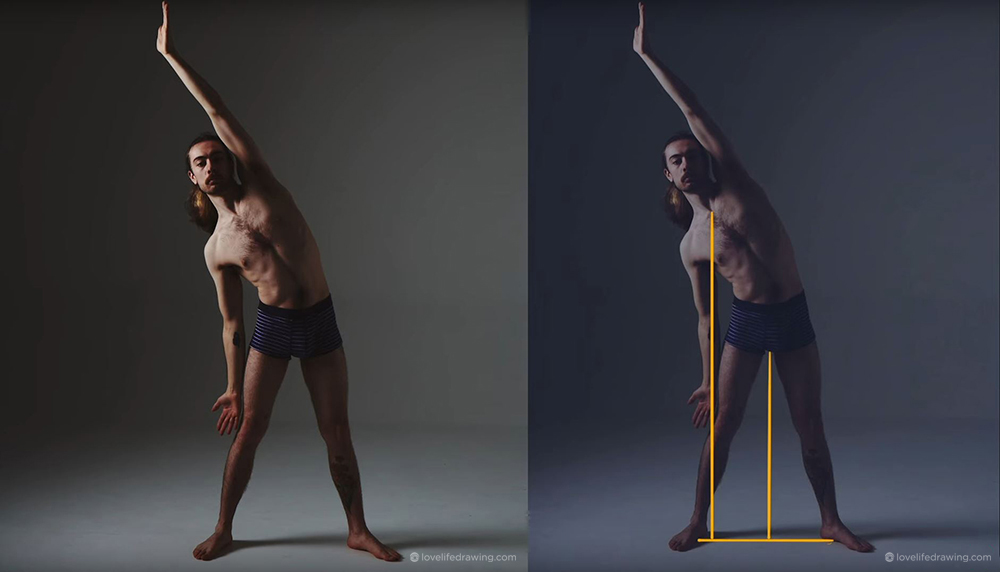 Once you establish that there’s one leg further back, try to bring in some additional clues for the viewer to understand that this leg is going back, for example with cross contour lines that show the leg is receding in space like in the example below. 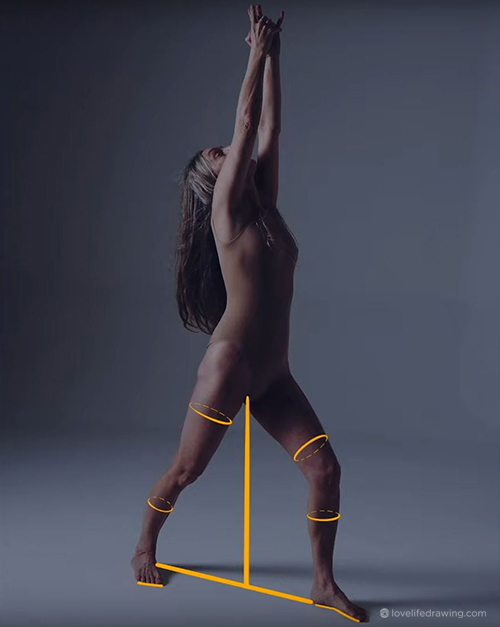 And finally, getting that contact point between the feet and the floor right is super important so it’s clear they are on solid ground and not floating. I have a whole other video planned for you guys about how to establish that sense of weight in the drawing, coming soon.

Before recapping all this, I wanted to make sure you knew that we offer a lot more than just awesome tutorials. We have a free reference library, a free figure drawing challenge that is transformative for your skills, we have a PDF guide that helps you assess your skills to see what you need to work on next.