Day 16: Getting used to the overhand grip and when to use it

You might not remember what it was like to learn to write as a kid, but it was probably really awkward and strange. You had to think about each movement consciously. But now writing using this grip, called the tripod grip, feels completely natural – you don’t even need to think about it. We are going to learn about the overhand grip, and persevere with it til it also feels natural. 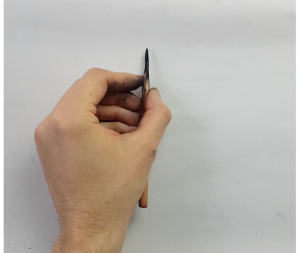 Here’s an exercise that can be useful for getting used to the overhand grip .You can do it now with me if you have your sketchbook out, or before you do today’s practice. Draw two points on a piece of paper. Hold the pencil or charcoal between thumb and middle finger, with your index stabilising when necessary. Moving from your shoulder, draw a straight line between these two points, aiming to cut through both points. Next, draw a curved line above and below still cutting through both points. Then a deeper curve and so on until you have a sort of beach ball. 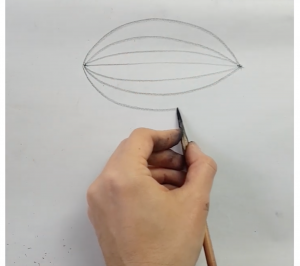 The overhand grip is going to be really useful for a lot of applications, but if you are focused on digital drawing with a stylus or pen or something like that, then it may not apply, but in those cases you can make extra effort to be vigilant about your arm movements.

If you have more time, you can switch to tripod for detail areas, but for short poses, you can stick to this for the whole thing. You may not have time to get drawn into the face in a short pose. One approach is to just include the ear to show the direction the head is facing, or the ear and the two axis lines on the head.

I asked one of our viewers, Danny to do some drawings of torsos. He likes to use our approach outlined in our beginners series, the stickman, and I noticed he’d learned to use his arm and the overhand grip really well in a fairly short amount of time. 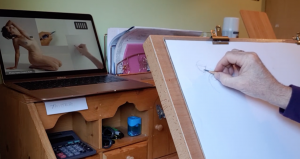 So during the short poses today, see if you can use the overhand grip with big arm movements for the whole drawing, including the head.
See you in the next post!