This article is the second part of the 3 Levels of Gesture Drawing series. You can see part 1 here and part 3 here.

We’re taking gesture from clear as mud to clear as crystal in this series. In part 1, we started with the foundation of gesture drawing, which is angles. Those are clearly defined and based on the structure you see.

Now we are going to get into the second level of gesture, which is where this idea of flow and rhythm comes in. All those beautiful curves you love in gesture drawings won’t be so mysterious after this article.

Below are two sets of stars. 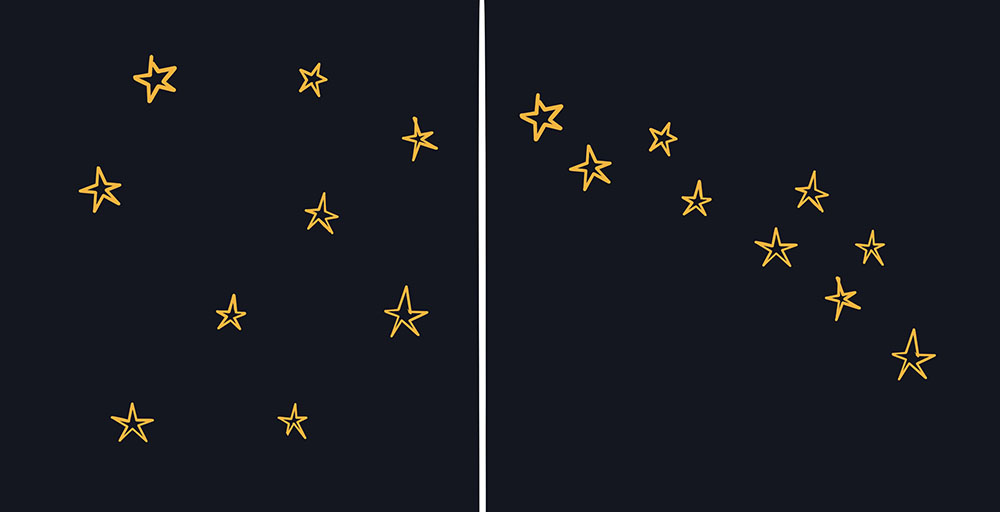 In the left frame (above), the stars are sort of all over the place. But in the frame on the right (above), the stars have a fairly obvious flow through them. In this example, it’s pretty easy to see. It’s almost undeniable that the stars in the right frame are related to each other along a diagonal line. That is how clear and obvious the flows we want should usually be too. So it’s not that you have to see something that isn’t clear or obvious. It’s not about special talent.

The challenge is that we aren’t seeing a load of stars in life drawing, we are seeing a figure. 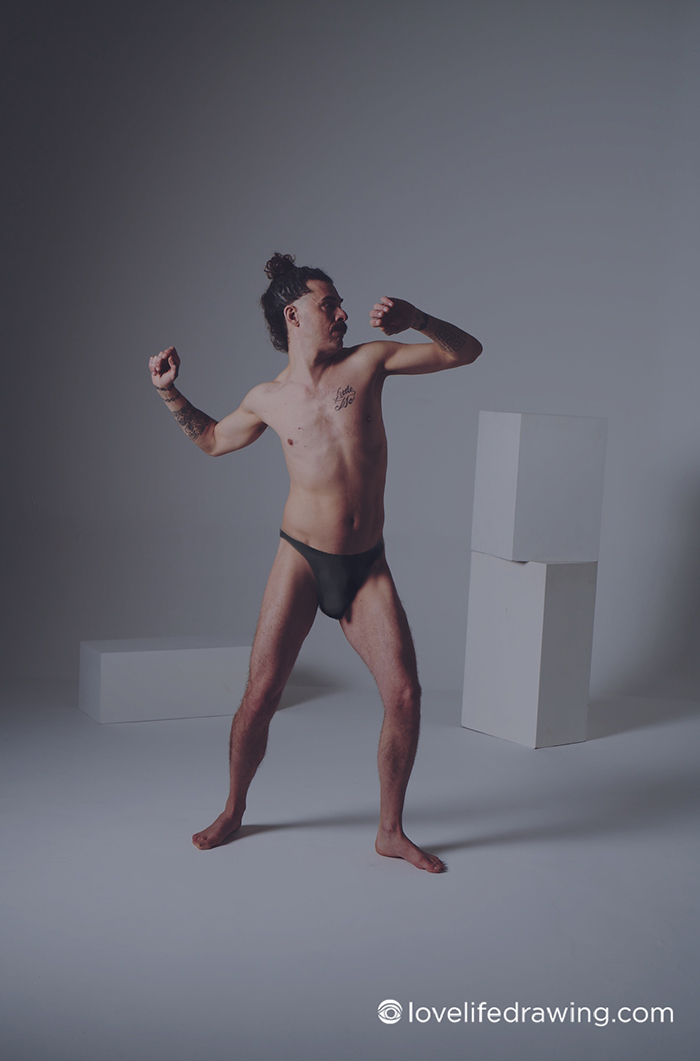 Imagine if what we saw in this figure turned into a series of dots, as in the image below. 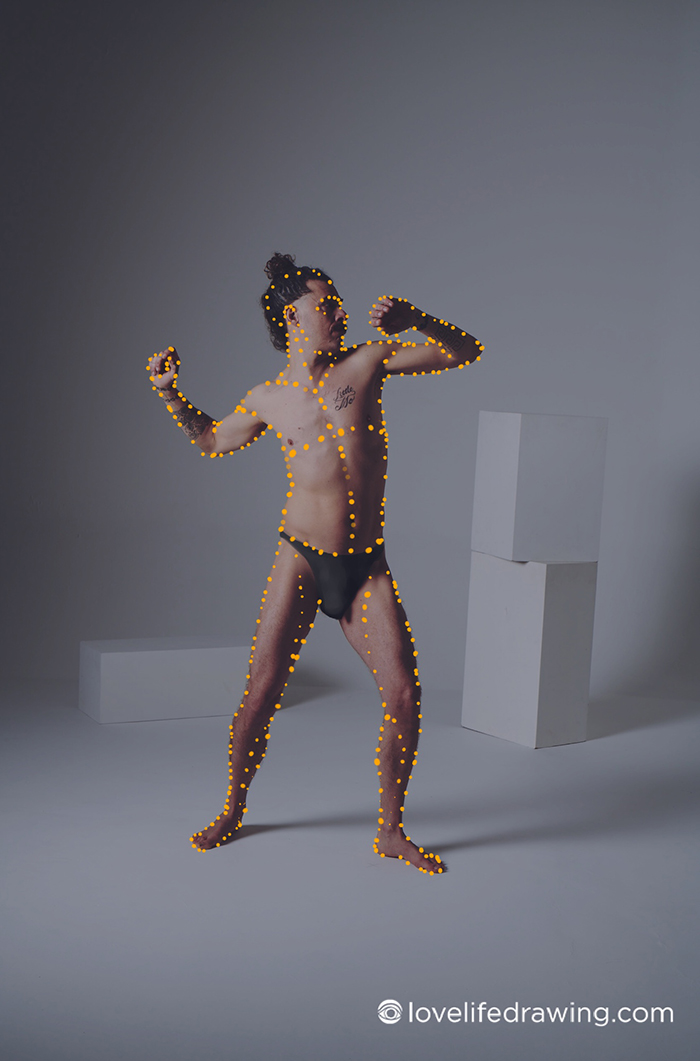 You could start to see flowing curves that run through them: 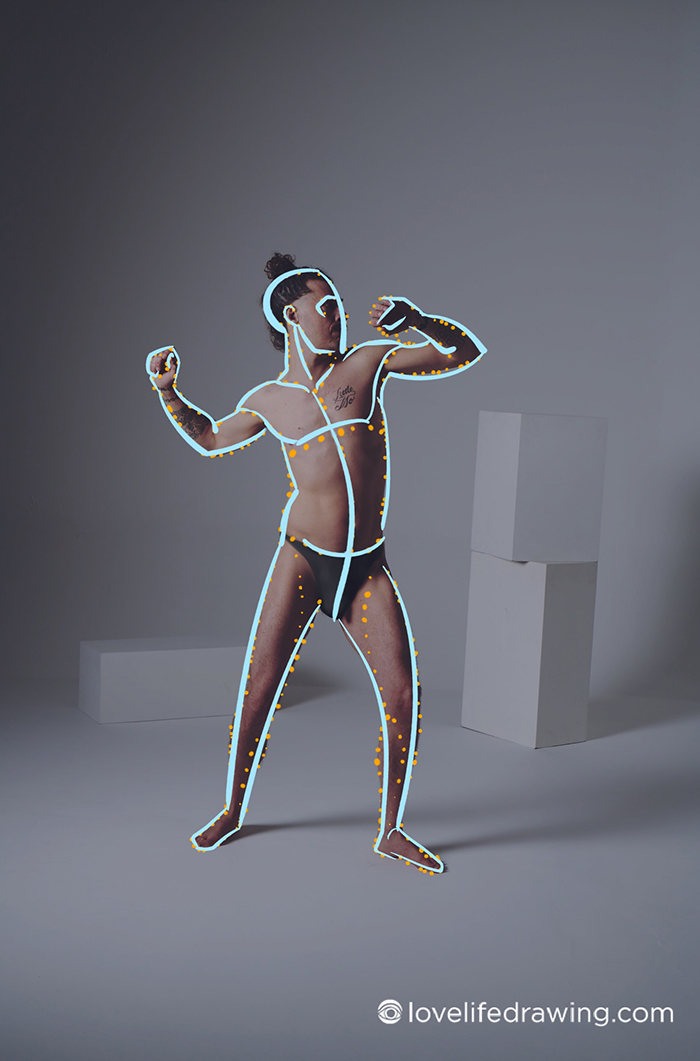 So here’s my suggestion to get you started seeing the important points of the figure that your curves can run through. Below is the outline of the figure: 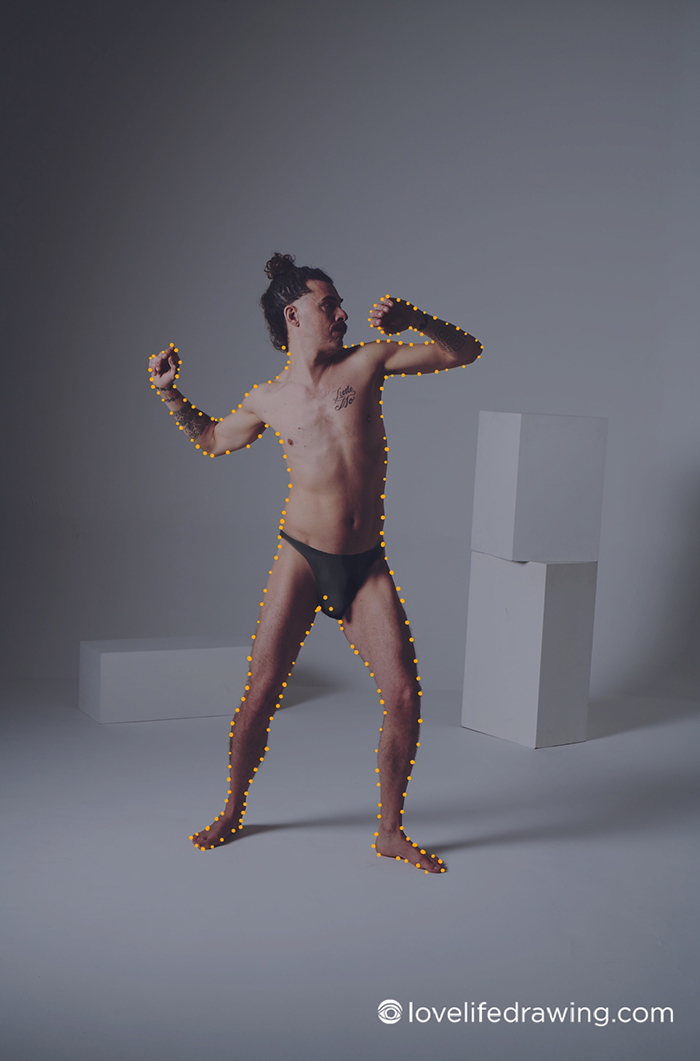 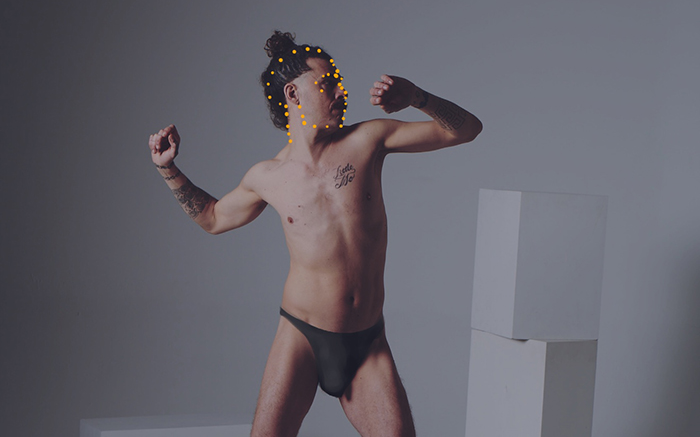 There’s the ear, which is always super useful to place, it’s a big point of connection and balance, and the sternocleidomastoid running from the ear, down the neck down to the middle of the collarbones. 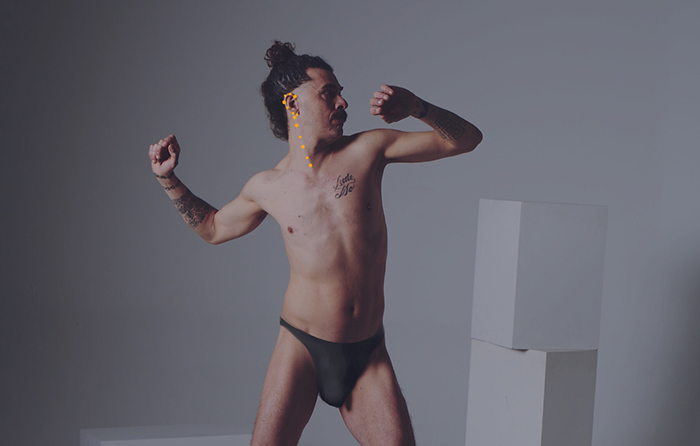 There’s the collarbones themselves, as we see in the image below: 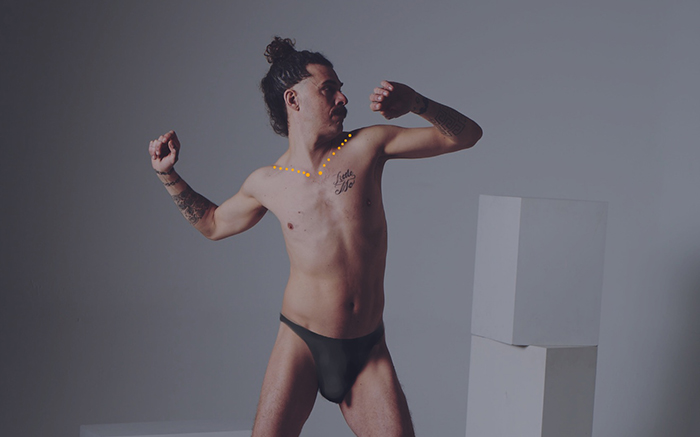 Then the line running down the middle of the torso, through the bellybutton to the crotch: 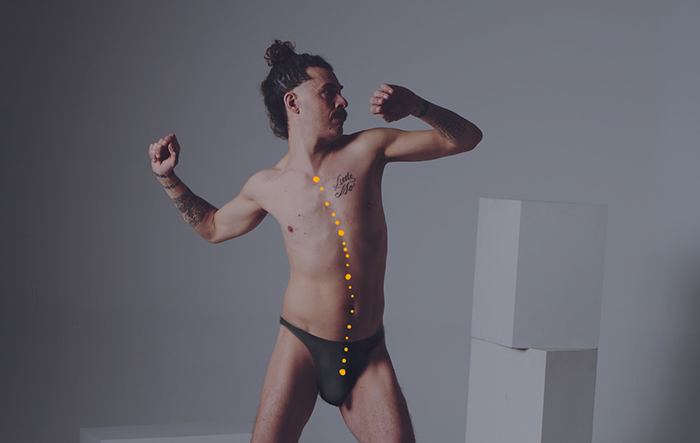 The line along the bottom of the chest, which continues along the pecs to the arm. The chest muscles are there to move the arms, so of course they go to the arm: 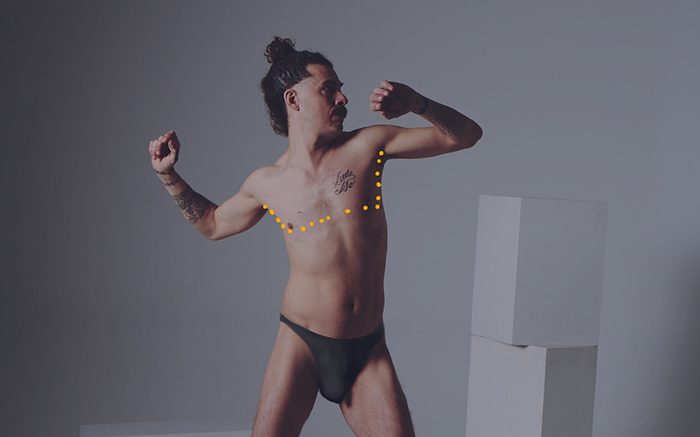 And from one ASIS to the other, a bit like a waistband if you were wearing pants. So before, we were just looking at the angles between these points. This time, in the image below, we are thinking more about the line running around the form, as if we were drawing onto the figure. 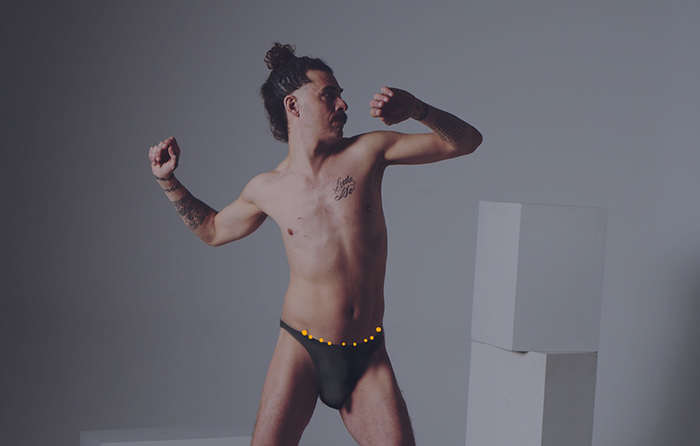 There’s the line around the deltoid muscle on the shoulders: 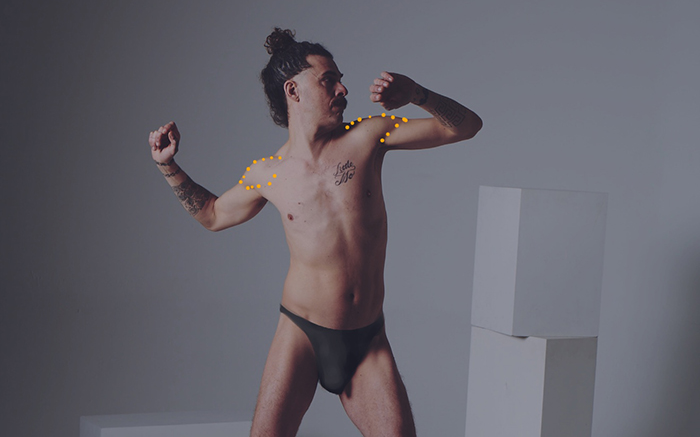 If you want to get a little more sophisticated in the legs, then there’s the sartorius from the ASIS down the thigh creating a little bulge on the inside of the knee, and the outward curve of the shin as well: 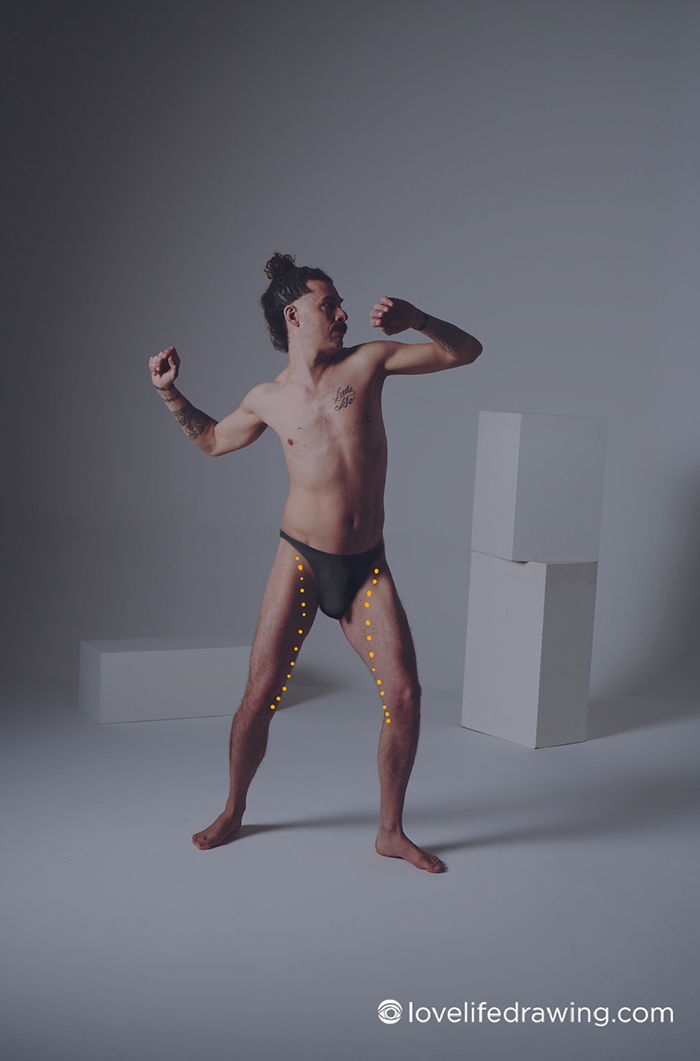 So these are all the points we might look for:

But it’s still got a load too much information and complexity, as we see when we just join all those dots together in the image below. Your eyes will still pick up on every little bump and change of angle in the figure. If you draw all these contours you’re seeing, just connecting every dot, every point on the outline, it will look something like the image below. A simplified figure, maybe with accurate proportions and angles, but the drawing below is not a gestural drawing. There’s too much irrelevant information. There’s no visual flow to the curves: 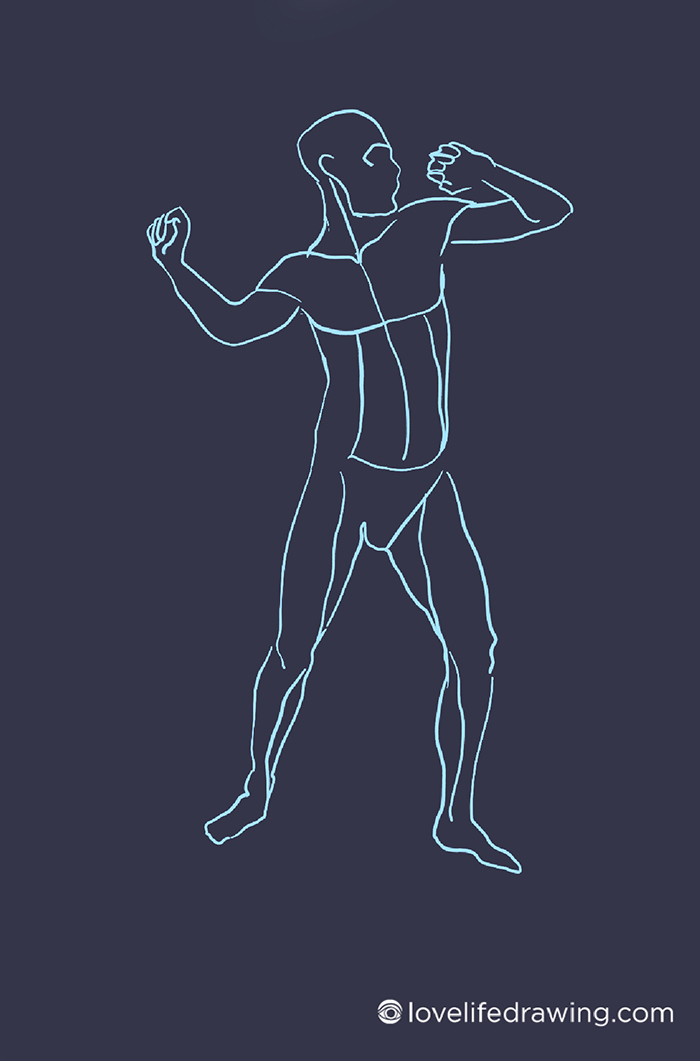 The point is that we then have to practise that skill of finding the flowing curves running through this complexity, just like we did with the stars earlier. Now we are getting somewhere. Just like the stars earlier, some of these points are off the curve, but that’s ok. You need that confidence to be able to draw right through the heart of all the points the figure throws up. I think that generally you can deviate from the dots even more in the arms and legs than you can in the head and torso, like in the example below (right). 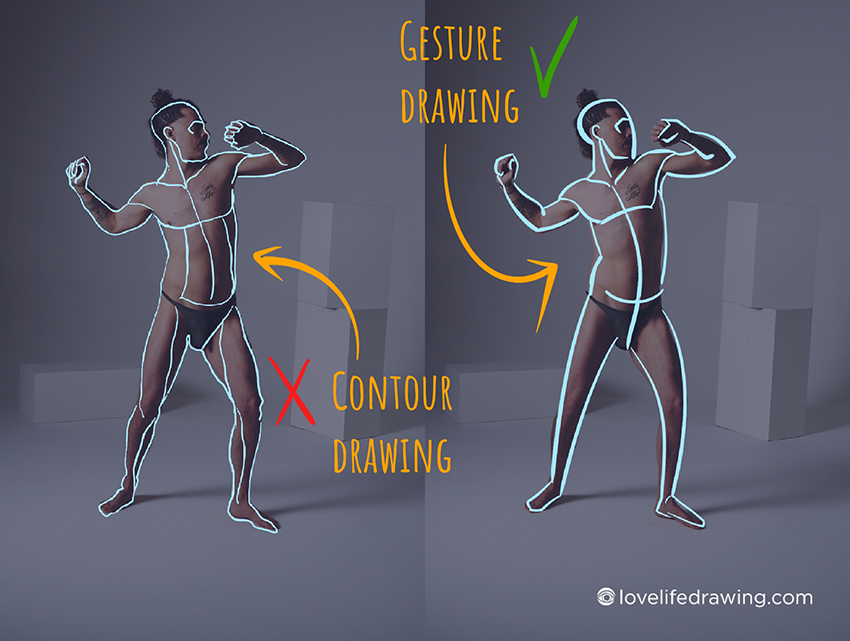 And then finally, when you draw the figure gesturally, you can push the angles as we talked about in the last article, and end up with a slightly exaggerated pose. So in this case, we will put his ribcage on a stronger angle to deepen the angle from ribcage to pelvis. 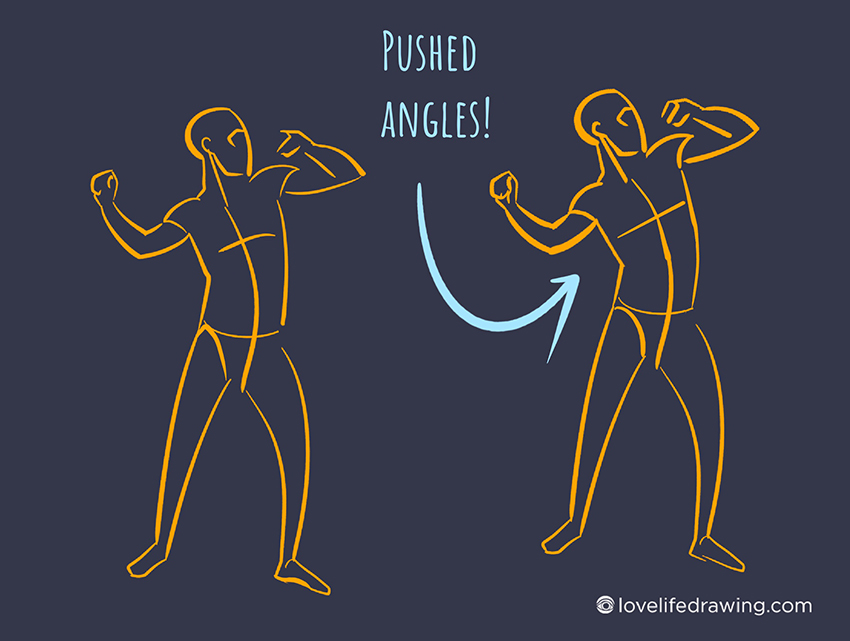 Now all that is hard to do in practice. I have some principles to guide you through this process.

Imply the basic structure and forms of the torso

So let’s look at the just the outlines in this example below. 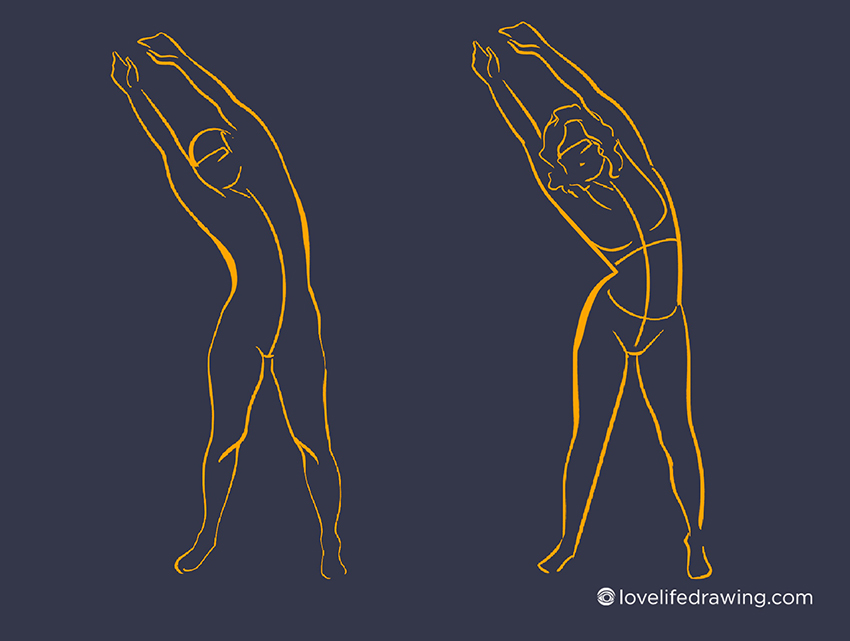 If I choose curves like I have on the left, it turns the torso into a mush. There’s no ribcage form versus pelvis form. It is more like one big piece of rubber or something.

It’s not a structural drawing, I’m not studying the anatomy of the ribcage or whatever, but I’m giving a feeling for the big masses. Now just to clarify, I’m not saying these are the lines you need to use for gesture, there aren’t any rules to gesture and it would be boring if everyone used the same ones, but this is a great place to start from.

Another problem with that last example drawing is the big concave curve in the figure on the left. A general principle is that you won’t often have concave curves like this: 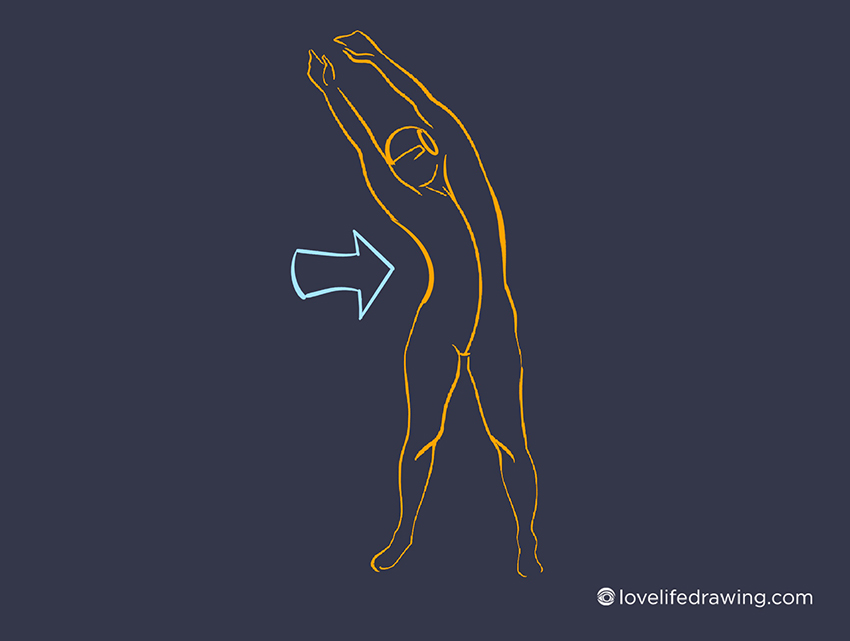 When you are doing more fleshed out drawings in particular, you generally won’t have many concaves at all. If you imagine we are filled with liquid, like a balloon full of water, everything tends to bulge out, not be sucked inwards. So when you look closely at human beings, most of the curves are convex. 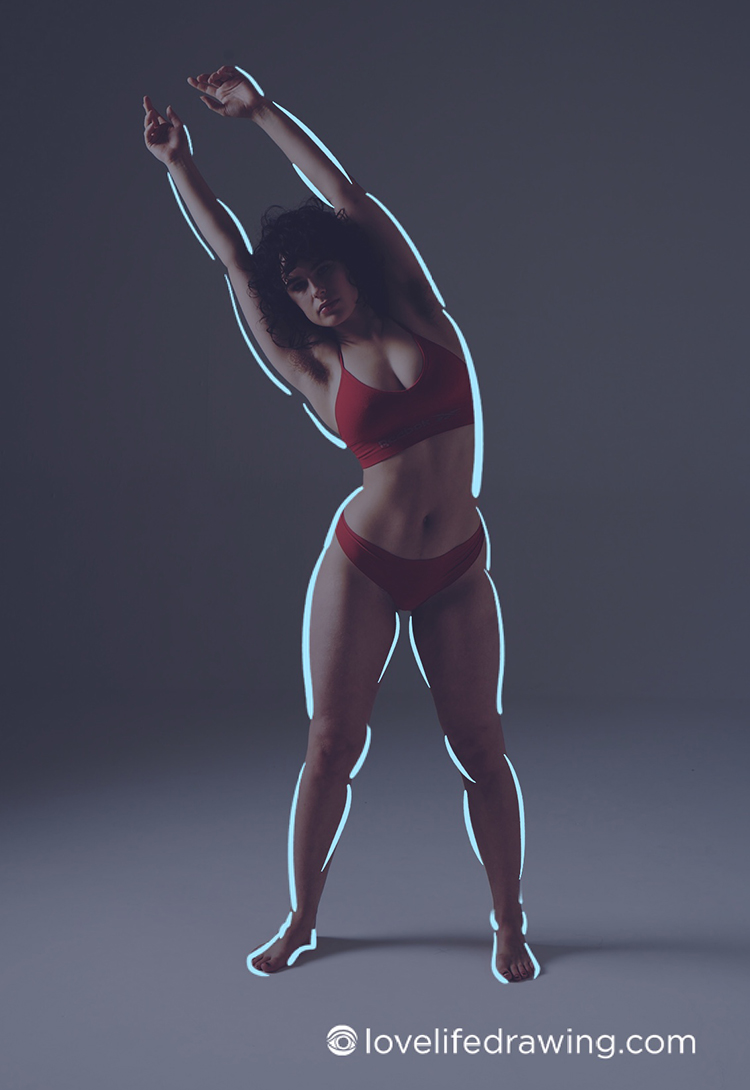 In a gesture drawing, there is more scope for using concaves, because we aren’t drawing the figure itself: we are drawing the gesture of the figure, and sometimes that’s how the flow will go. But still, mostly you will use convex curves. So when you are finding your curves of the torso, if you see something like in the example below where things come in at the waist, you would use two convex C curves, and not a concave curve. 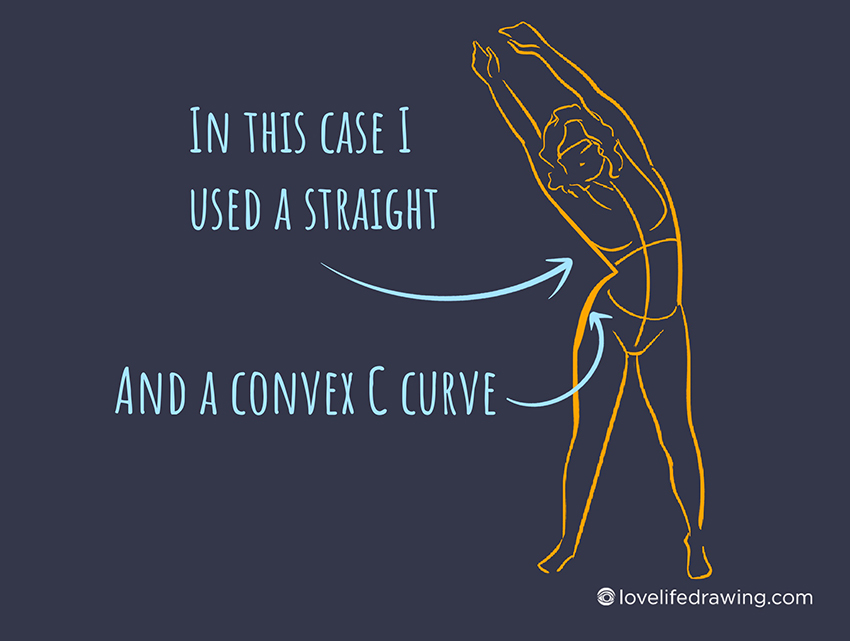 Now sometimes, people sort of go too far. They try to connect points that don’t really flow with each other, as in the version below on the left. It should usually be pretty clear and obvious and not feel like you’re forcing it. The one the right below shows a natural flow down these forms. I don’t need to be fancy and try to find a big curve all the way from the head down to the feet. It’s sort of there but doesn’t quite work, and it removes that sense of the ribcage to pelvis relationship which we really care about. So it’s a balance. You do want to cut through irrelevant bumps and undulations. You are drawing the gesture, not the anatomy. But on the other hand, you don’t need to try to connect things with flowing curves that don’t really work. 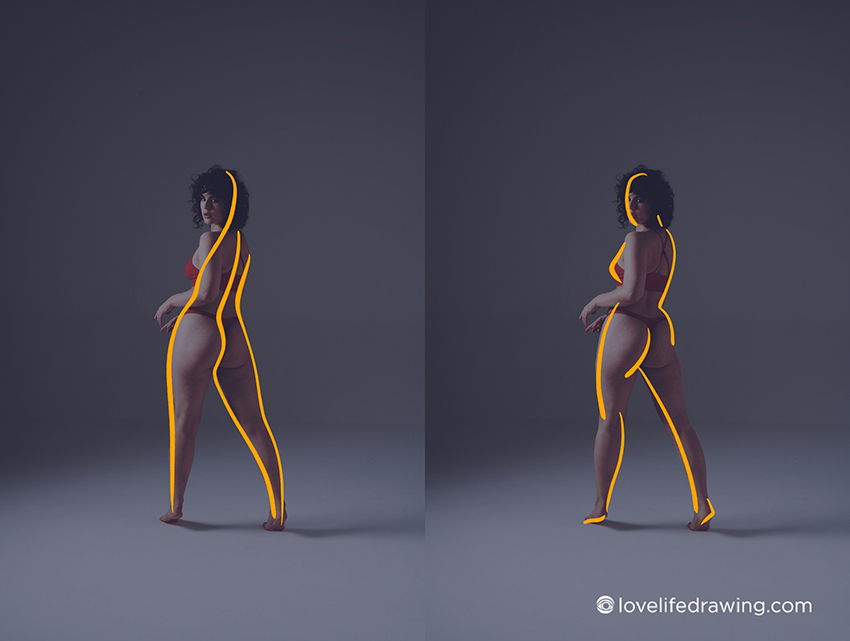 I know it’s not easy, guys! It’s hard to enough to just think about the proportions, try to see the landmarks, worry about this and that all within just a few minutes. But if you can learn each part of this skill one by one and get really good at them, then they will be second nature. Like when you are riding your bike, your legs are turning the peddles, your arms are steering, your eyes checking where you are going, all at the same time, and you can do it without thinking. It’s complex, so the first time you rode a bike, you may have crashed into a lamppost. Learning to draw figures takes much longer than learning to ride a bike, but it’s the same thing – you will get there and eventually it’ll just be easy and relaxing.

Stick to C S I

And finally, your flowing curves usually don’t need to go much beyond the C S I – type marks, so the most complex curve you use would be an S curve and most would be C curves or straight lines. That’s not really a rule, but just a nice principle to keep you on the right track. All of these are really ideas are really ideas to get you started rather than rules or ‘the way to do it’.

So I realised this series is called the 3 Levels of Gesture drawing, and I never explained the 3 levels. So the first was the angles. Hopefully you’re starting to see why I am constantly going on about those! The stuff in this article is the second level – the curves themselves. We haven’t finished with these curves yet. We still need to explore how they relate to each other, which is in the next article, which will be about rhythms. Then in the 3rd level, we will start to bring more meaning into the gesture. What I mean by that is that it won’t just be beautiful, the way we gesturise things will be meaningful. We will draw gesture that really makes us feel an action that the figure is doing, that really helps us feel the weight and balance of the figure and so on. I hope you are enjoying the series 🙂

If you’d like to see how the various skills of life drawing fit together, and assess which you should work on next, try our free Figure Drawing Skill Assessment guide.

This article is the second part of the 3 Levels of Gesture Drawing series. You can see part 1 here and part 3 here.