This article is the first part of the 3 Levels of Gesture Drawing series. You can see part 2 here and part 3 here.

We want to do beautiful drawings of people. Drawing people comes down to balancing two things – the structural and the gestural. So gesture is a huge part of drawing people and it is the most fun aspect of life drawing for me. But there’s a problem. It’s often described in quite vague and unclear terms.

You might have heard gesture explained in these ways before:

I’m going to suggest in this article that the first level of gesture is angles, and that is where you start, which is good because it’s easy to define clearly. Most teachers start you off with big gestural curves. But the curves you end up using need to come from a clear understanding of the angles we talk about in this article. I’m going to break them down into 3 types of angles.

Angle type 1: angles of the forms

Angles are easy to define. There’s nothing esoteric about this: it’s not about feeling flows. You can just hold up your pencil to line up the shoulders. That’s the shoulder angle.

Then you look for the angle of the ribcage. Often a good starting point for that is the sternum, the middle of the chest. Then you know that the angle across the bottom of the ribcage is going to be roughly perpendicular to that. 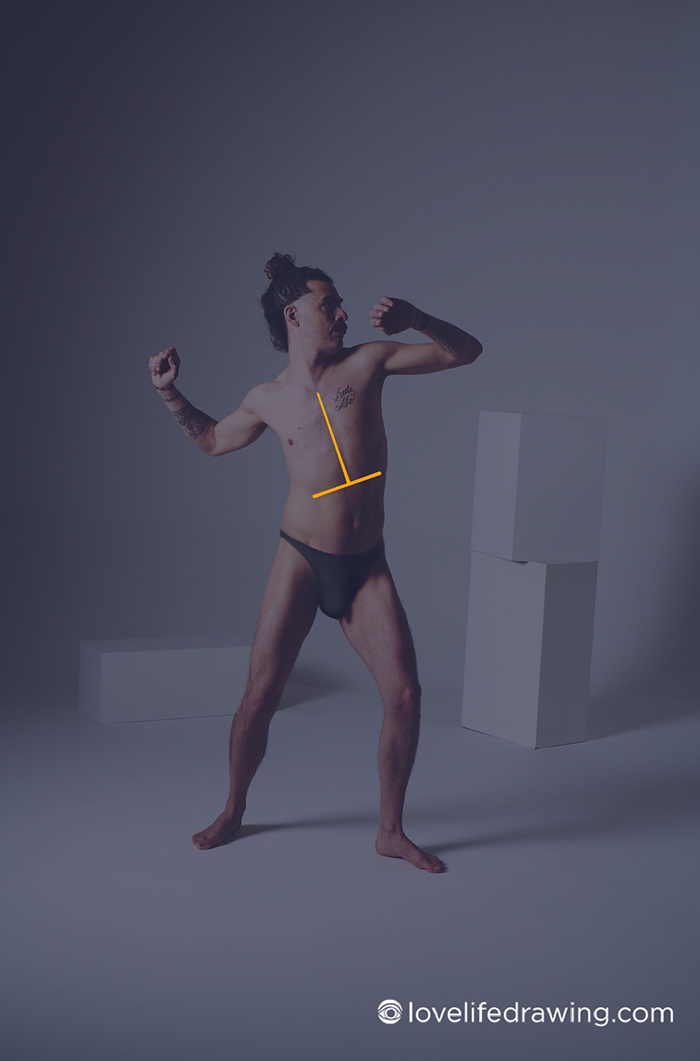 On the back, the spine and the outline together give you some idea of the ribcage angle, but what you see can get quite confused. The spine itself is a little flexible and the musculature around the spine affects the curves you see there, and the muscles around the upper back affect the outline, so it’s trickier. However, as you become better at seeing the ribcage angle from the front, you will get a good intuitive sense of it from the back too.

Then there’s the angle of the pelvis, which from the front is best seen as the angle between the ASIS points, the bony bits that stick out, about the level of the waistband of a pair of trousers. You can probably feel these on yourself.

On the back, the pelvis angle would be the one across the two dots of the sacrum which you can see on most people. As you gain experience, you’ll pick up on more and more visual clues for these angles, but also, you will just start to get an intuitive sense of where the ribcage and pelvis are. 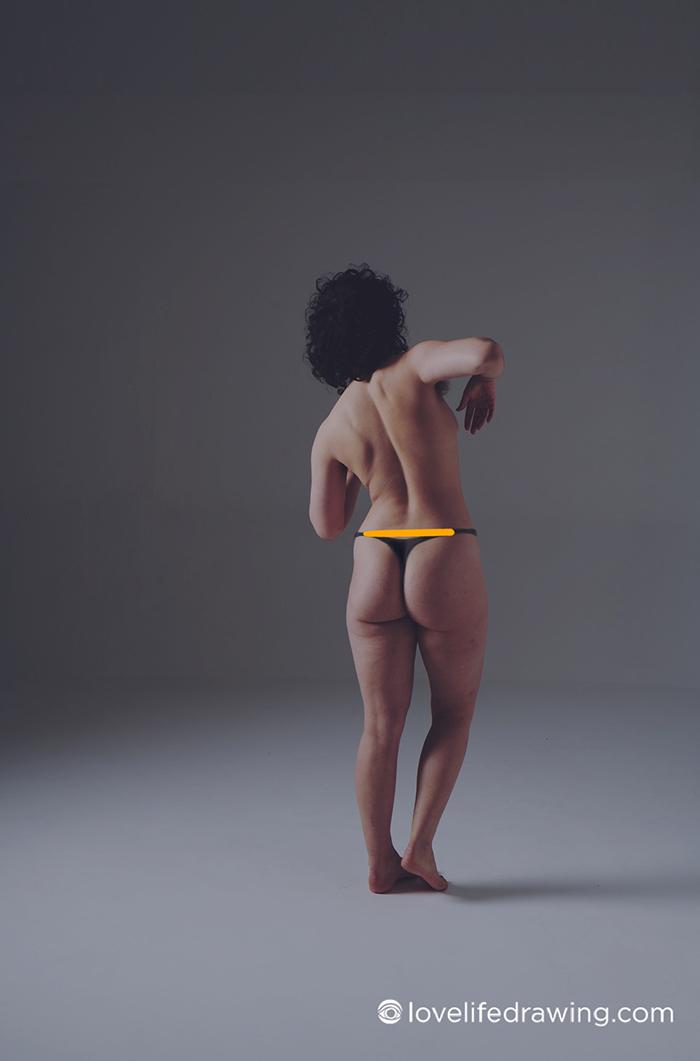 There’s the angle of the head, which is about seeing the brow axis line – around the head through the eyebrows and the tops of the ears. That idea is part of the Loomis head. 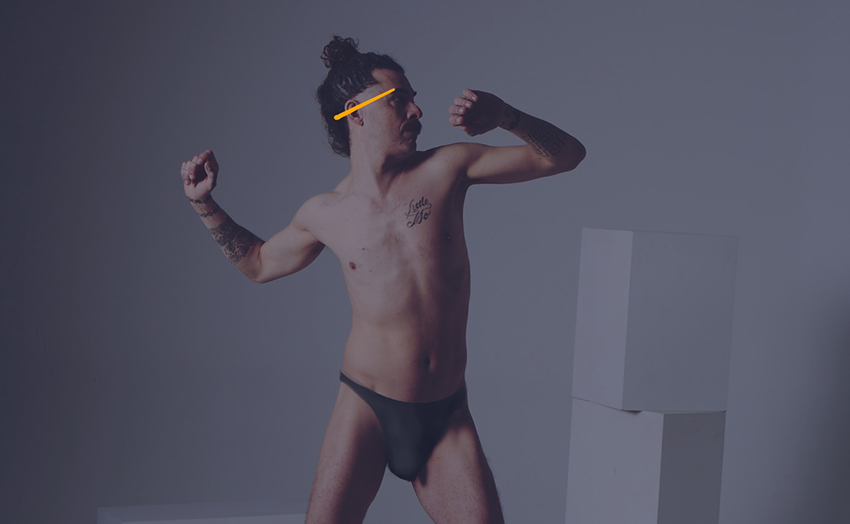 The thing that is interesting is how these angles relate to each other. Any differences in these angles is going to be something you want to bring out. Eventually you won’t be drawing all these angles, you’ll just be seeing them, but for now it’s useful to actually draw them, either onto the reference directly, or onto some paper. 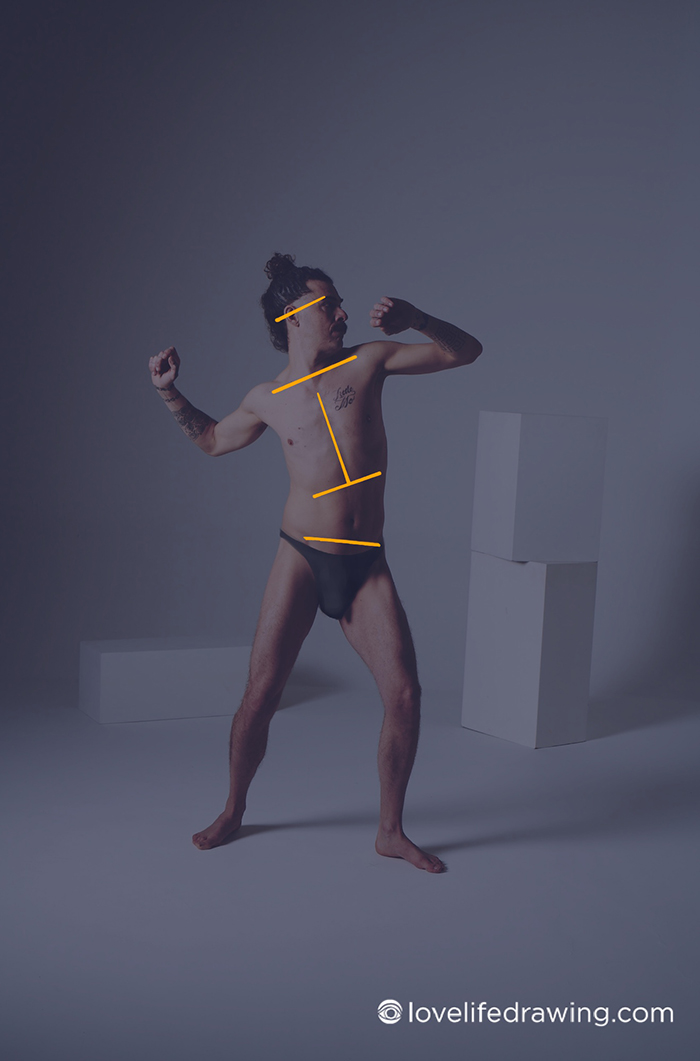 Learn landmarks first. You’ll notice with these angles that I’m mentioning anatomical landmarks quite a bit. That’s why in our roadmap for learning figure drawing, landmarks come first, and then the second step is learning to see these angles.

This might be a good moment to explain more clearly what I mean when I talk about figure drawing being about balancing structure and gesture. It’s an idea I first came across from a Steve Huston book and I like it a lot. I think of the structural as being all the parts, so the anatomy, or the simple forms of the figure would both be different ways of looking at the structure. The structure has a right and wrong to it. It is quite concrete and definable. The landmarks are part of the structure. Concerns about proportions and accuracy when drawing a figure would mostly be on the structural side too. 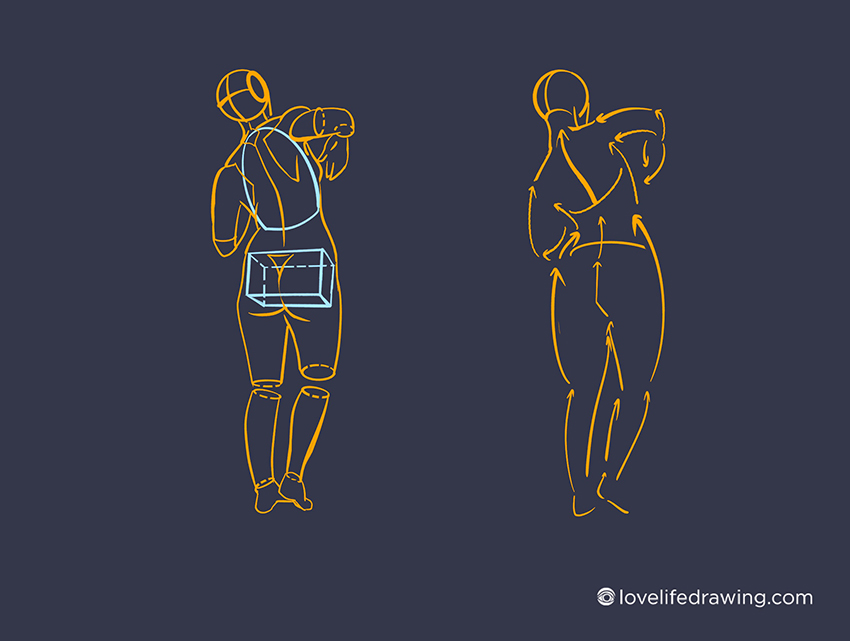 The gestural though is what separates us from being just machines, just lots of parts stuck together. The gesture breathes life into the figure, makes it organic, makes things flow and buzz with life. If you make your drawing too structural, then it’ll lack life. If you make it too gestural, it could look cool but might not end up as recognisably human. 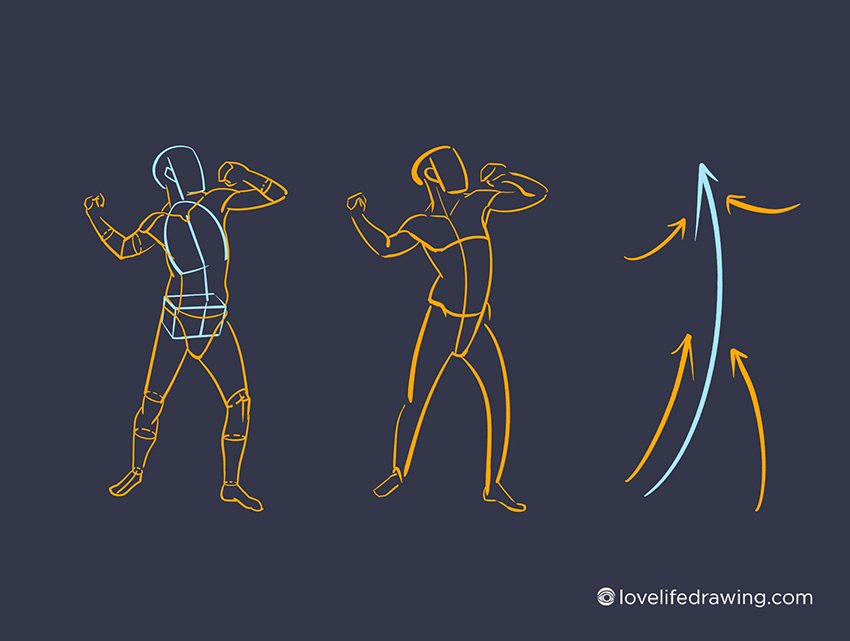 When you can balance the two, it’s great. Some artists will lean toward the structural and others toward the gestural. My favourites like Richard Powell tend to lean towards the gestural. But can you see how he does gestural quick sketches built onto very clear structure and strong angles. 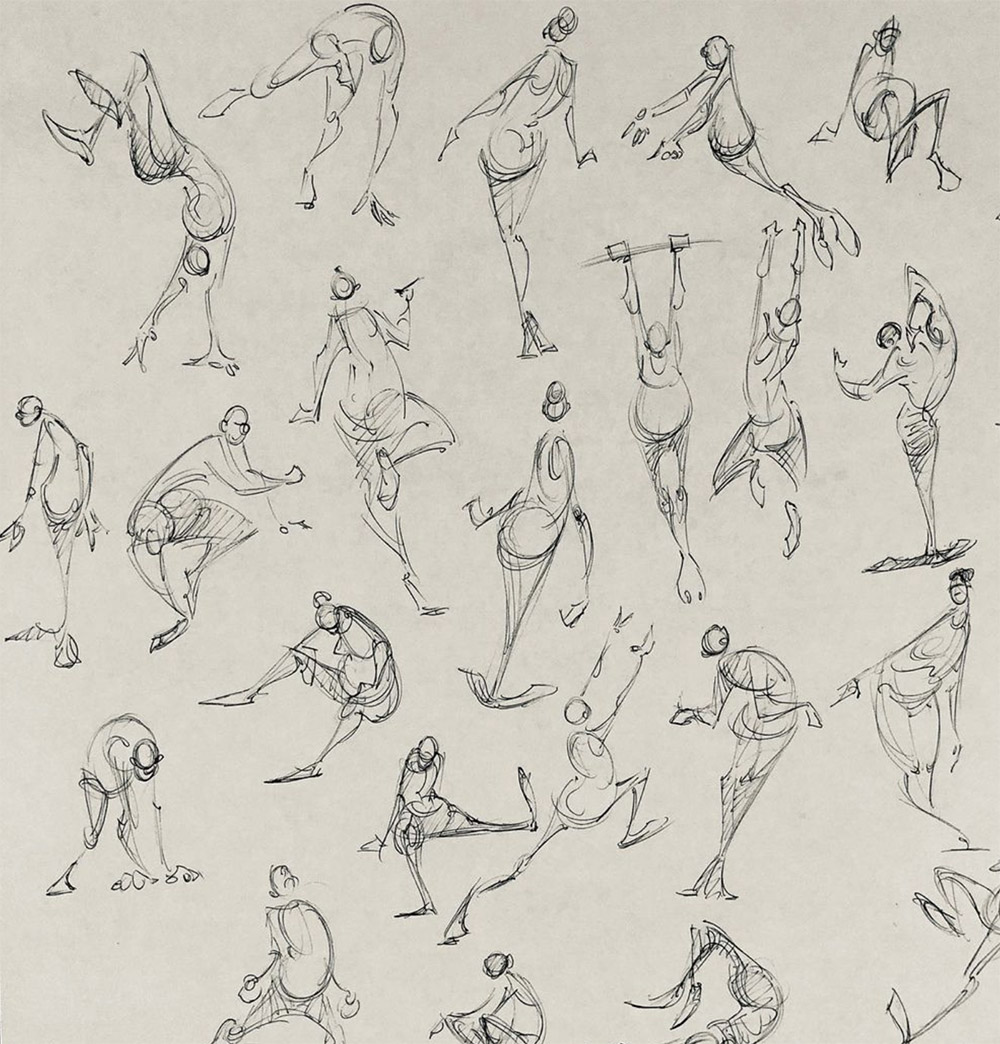 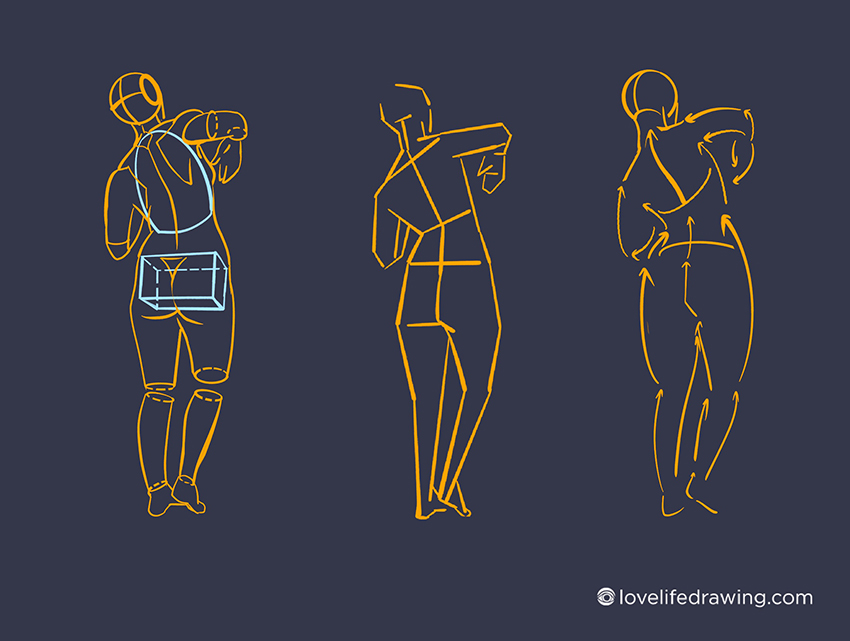 So the angles come from structure, but they are important for gesture. Either way, you need to get good with your landmarks, which is why that is step one in our roadmap checklist PDF(HERE). It’s all been thought through!

Angle Type 2: Angles between the forms

So back to the angles, the second type of angle is the angle between the major forms. This is just as important. So in the images below, the pelvis is off at an angle relative to the ribcage. You really need to see and capture that. 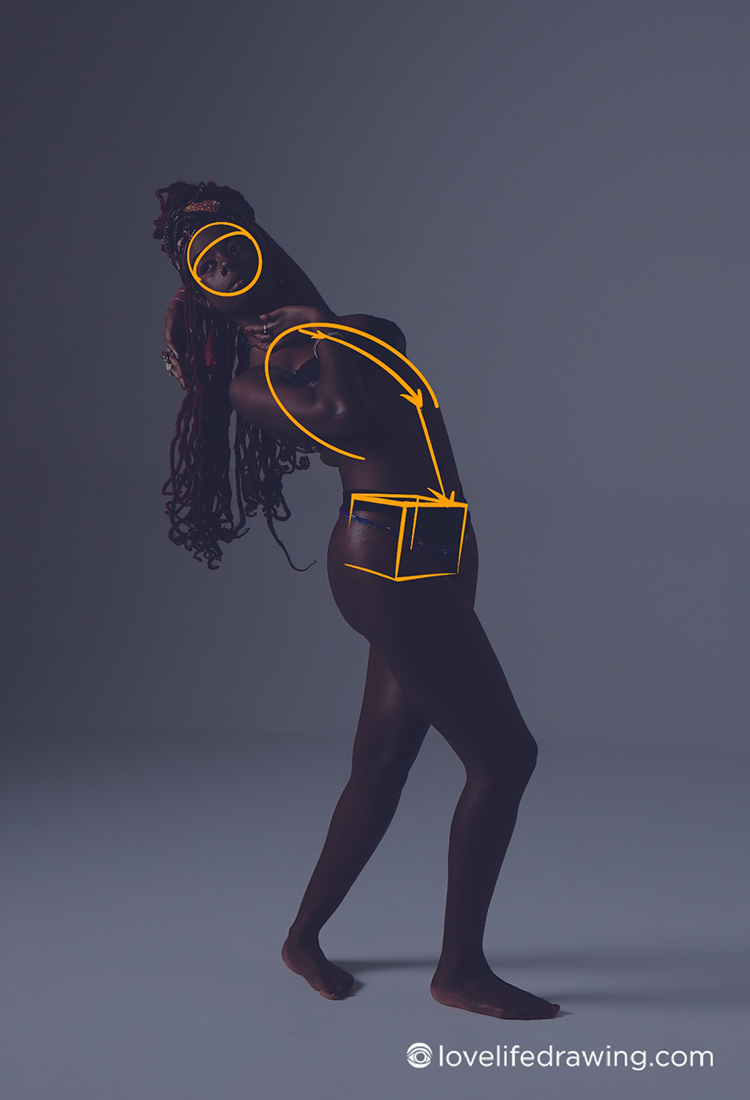 A mistake I very often make is to lose the angle of the head relative to the ribcage. I always just stick it on top. So often, the angle is much more interesting than that, and it makes a huge difference to get that head off to an angle. You really want to find these angles and avoid making the figure more vertically stacked than it actually is.

So at this point, you might be saying, “well, angles are interesting, but that’s not gesture. Gesture is about curves and fluidity and organic lines, but this is just a bunch of straight lines.”

But to me, gesture is what breathes life into the drawing. It brings more dynamism to a pose and it creates a visual feeling in the drawing. So maybe angles alone aren’t all of gesture, but it is what lies underneath a successful gesture.

If your drawing has lots of fancy curves but no clear angles, it’s lacking its gestural core. Which of these two drawings below captures this pose’s gesture better? I would argue the straight line version (left), even though it’s not really a gesture drawing with the usual curves and flows. 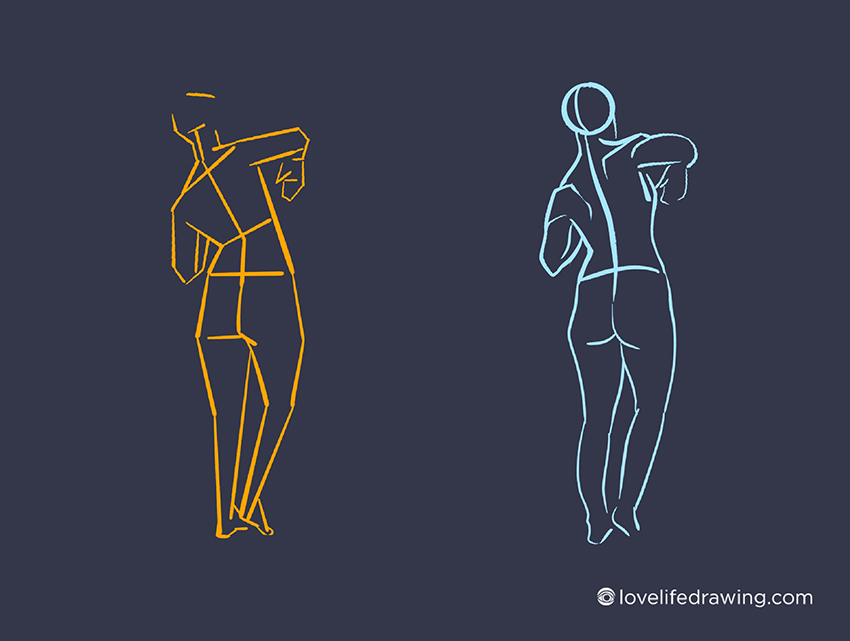 You might have noticed that the angles I’ve mentioned so far don’t really make a drawing. So another important type of angle is in the actual lines you use for the drawing: the outlines. In particular, it’s useful to look for a ‘squash’ side and a ‘stretch’ side to the torso. The arrows in the image below are pointing to the ‘stretch’ side of the torsos; you can see that the pink line on the other side of each torso indicates the ‘squash’ side. 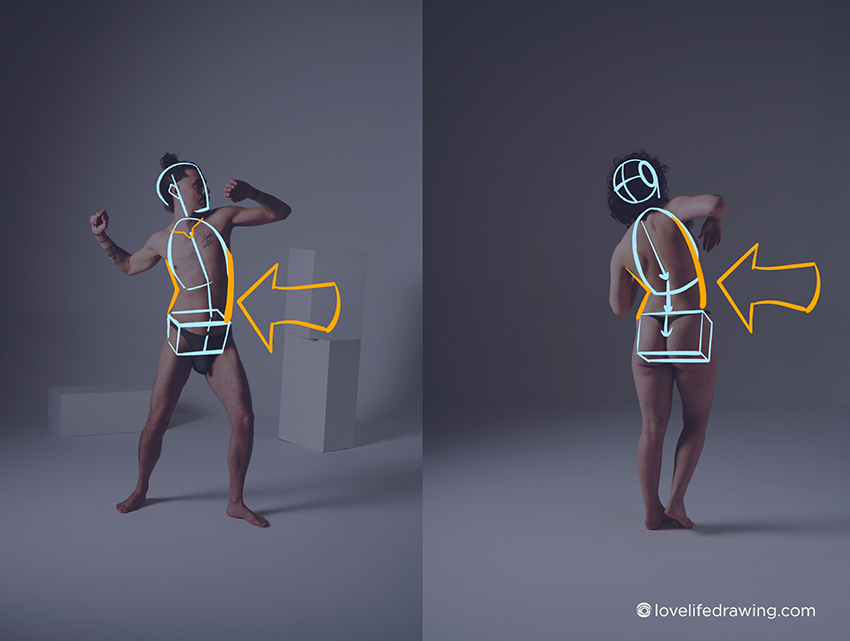 Usually when starting life drawing, most people will try to see every little change in the figure’s outline and capture all the little bumps, but you need to cut through the noise and find the major angle changes. Using a straight edge for this exercise below really forced me to focus on the big angle changes that really matter. 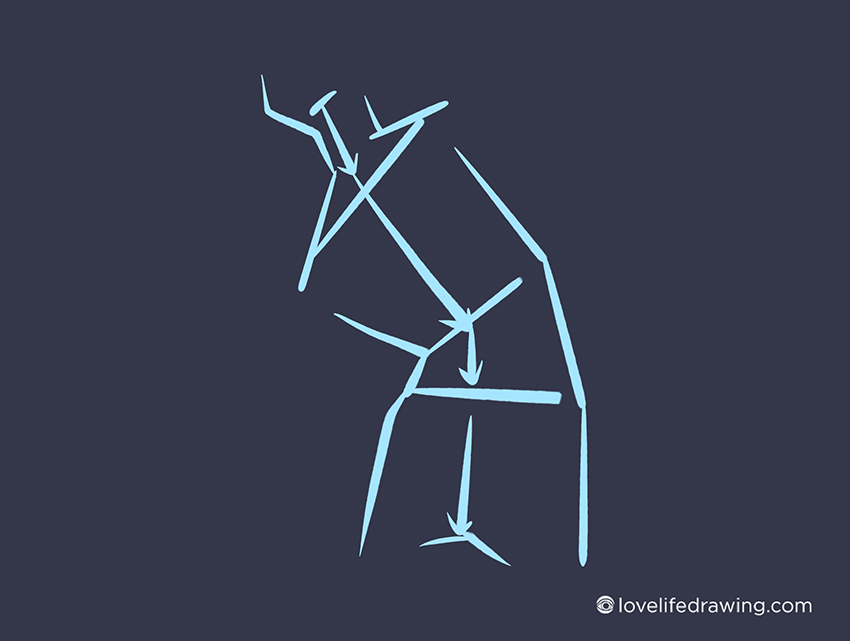 What about arms and legs? 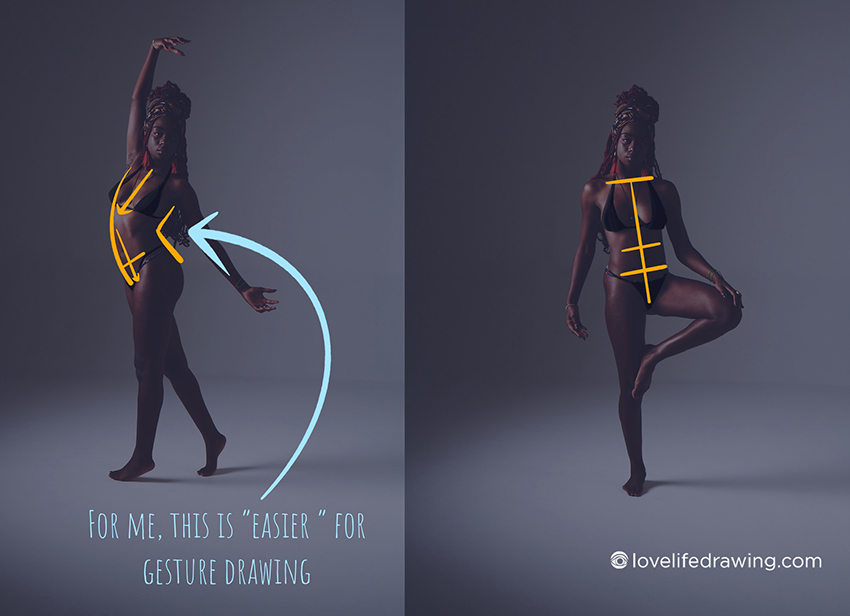 It’s pretty subjective, but in my opinion it’s true. It’s a little bit like how if you were to throw a punch, it’s much more powerful when it comes from the hips and body, rather than just an arm punch.

To find the angle of the arms and legs, it’s useful to look at the end points in relation to your head and torso. So in the examples below, you would find the elbow, so that you know where your angle should be pointing at. When you come to the arms and legs, there are two important characteristics that you can capture these with straight lines. The first is how the limbs taper down, so the straight lines get closer together overall as you go down the limb. The second is weight and balance for the legs – but I’ll cover that in a future tutorial. 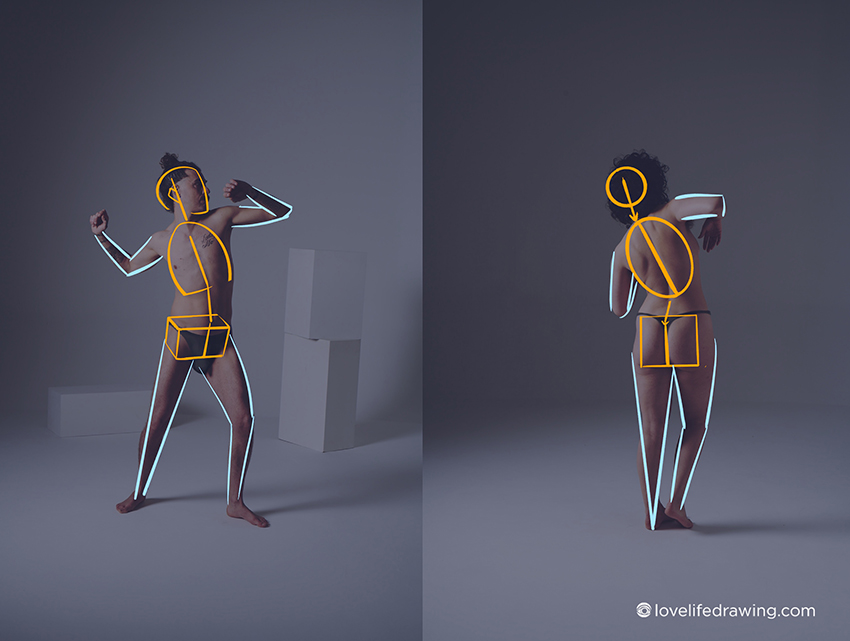 Push the angles just a little. Don’t push them so much that you need to actually change the drawing from what you’re seeing, just nudge them a little bit for now. 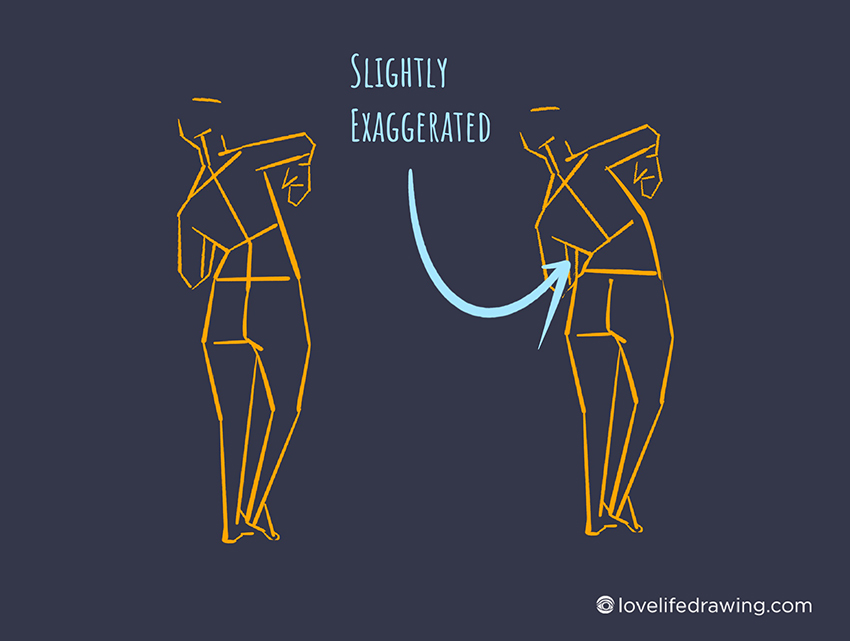 I would really recommend looking for and practising these angles before you worry about line quality, expressive curves and any of that other stuff, because 80% of gesture problems in my opinion come back to these angles. 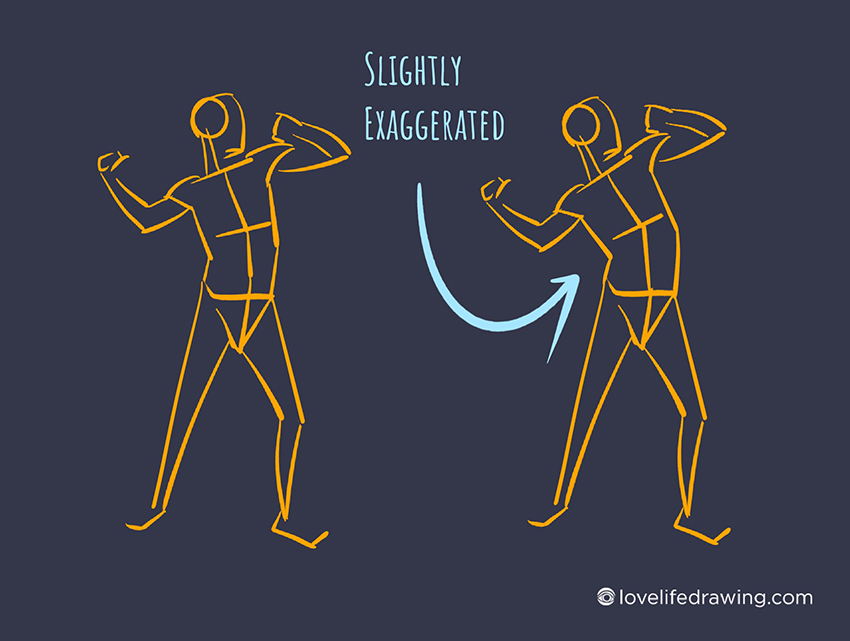 This article has hopefully started to clarify that gesture is dependent on a variety of other skills, including landmark recognition and seeing angles. I’ve created a PDF guide that will help you see all the skills you’ll need and the best order to learn them. It is free and you can get it, along with our newsletter which is also packed with useful tips, with the link HERE.

This article is the first part of the 3 Levels of Gesture Drawing series. You can see part 2 here and part 3 here.