In our last video, we went through a simple process for drawing faces from the side.

The process when drawing a face from the front is similar to side-on views, but because you can see both sides of the face, the relationship between the two sides becomes important. The face will look natural if we can properly balance the proportions, positioning and angles of each side in relation to the other side.

Before getting into specifics on each feature, lets think a bit about the overall process. When editing this video together, if I want to show, for example, how Mayko draws the nose, I have to grab sections of the video from throughout the drawing. That’s because Mayko doesn’t just draw the nose in one go and then move on to the next part of the drawing.

She puts a structure in place first for the whole face, including some very rough shapes for the nose. She continues to add extra layers of contour and tone throughout the face, each layer becoming a little more accurate and nuanced – so the nose will be visited many times throughout the drawing. She doesn’t do this particularly systematically, but more just on feeling. Her eye tells her what needs to be built up next, and she doesn’t allow anything to get too polished or detailed in isolation. Everything is worked on evenly.

This is her process – it may or may not work for you. One advantage is that if you need to move or resize or change the angle of a feature because it’s not working relative to the rest of the face, it’s a lot easier when it’s not much more finished that the rest of the face. Another advantage is that it’s easier to see how each feature should be in relation to other features, so it’s easier when all the features are built up at the same level.

For quite a lot of this drawing, Mayko had this edge of the face and the chin quite wrong, but that’s not the end of the world – she can move things around throughout the drawing. 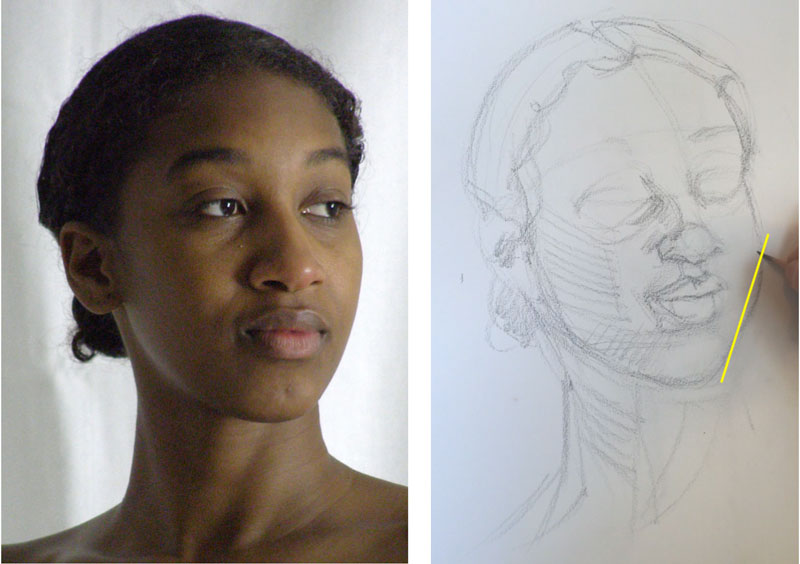 The two sides of the face

So from this angle, we can see both sides of the face, but we can see one side more than the other. So from our point of view, one side is narrower and the other is wider.

For the narrower side it’s going to be useful to look at the shape created between the edge of the face and the central facial features like the nose, mouth and eyes. You can see this shape a bit like you normally use negative space. 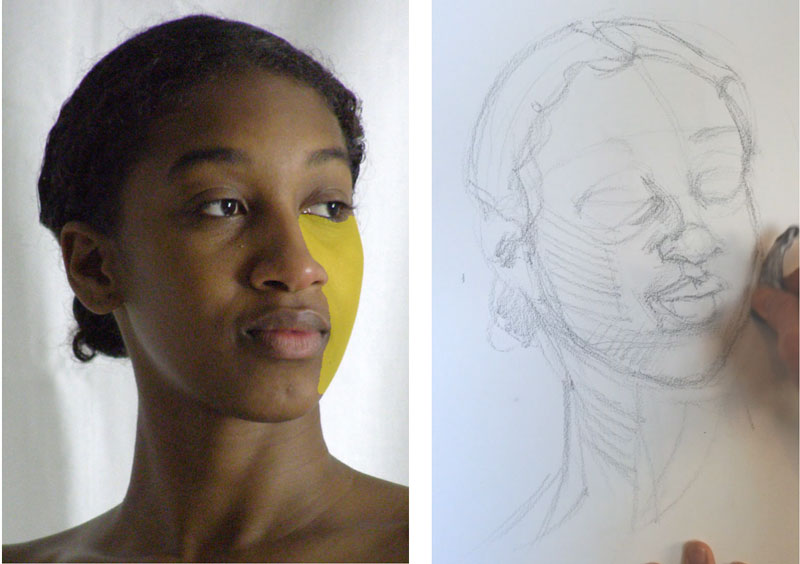 On the side that is facing us more, the shape created between the central features and the edge of the face is a little too big to be useful. It’s easy to make this too wide or too narrow. So, we can use tonal shapes to break up this area into smaller chunks. To start with, we are going to massively simplify the shapes of the shade on this side of the face and lightly shade that area. 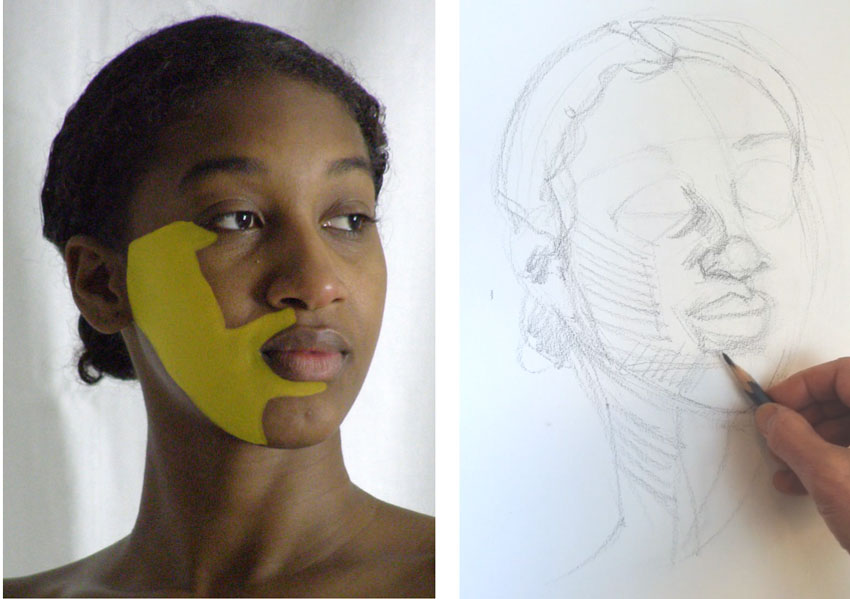 The central line of the face

When starting to put in the basic structure of the face, it’s useful to put in that line that runs down the middle of the face. It’s worth keeping in mind that the way this line curves will vary between different faces. This model’s face, if you look at it in profile, is quite curved, so in the ¾ view we need to consider that. Other people have flatter faces.

You may have seen in our other video that we talked about seeing a heart shape created by the lips. Rather than looking at the mouth as a mouth or the nose as a nose, can be helpful to seeing the features in terms of other shapes this way. It helps prevent our pesky minds from distorting the shapes we are seeing.

This time, since we can see both sides of the mouth, we can look for two heart shapes that overlap in the middle – the one on the far side will be stubbier and shorter because it’s angled away from us. 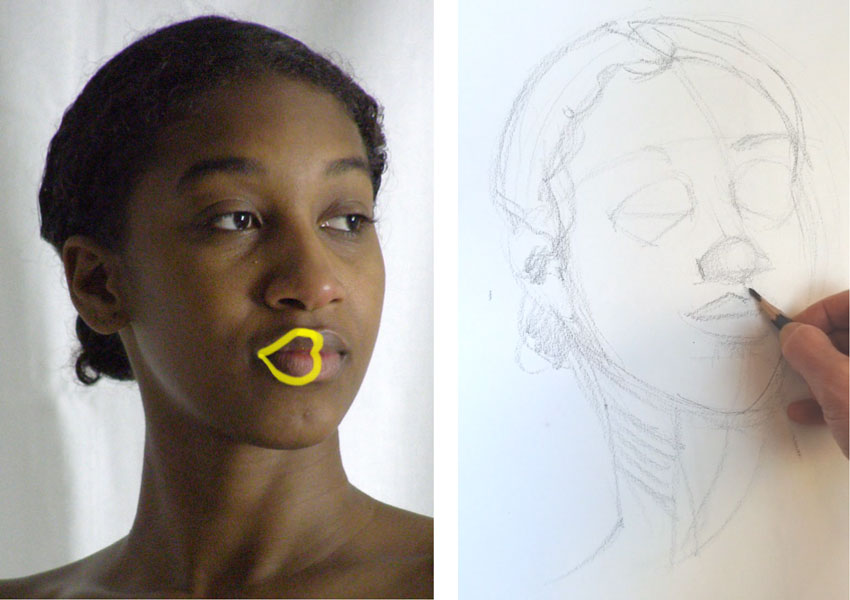 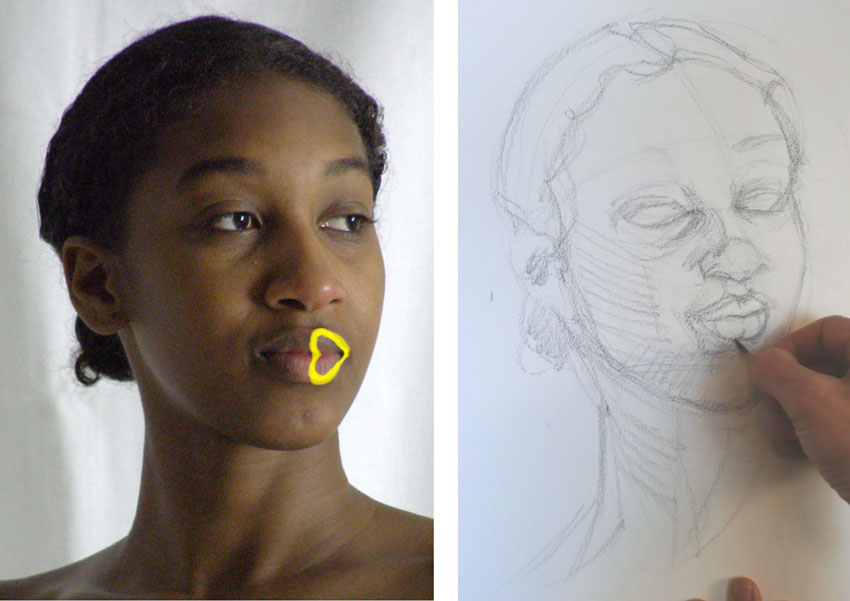 As you observe the nose, look out for the part of the nose where it sticks out from the face least – somewhere around the bridge between the eyes. 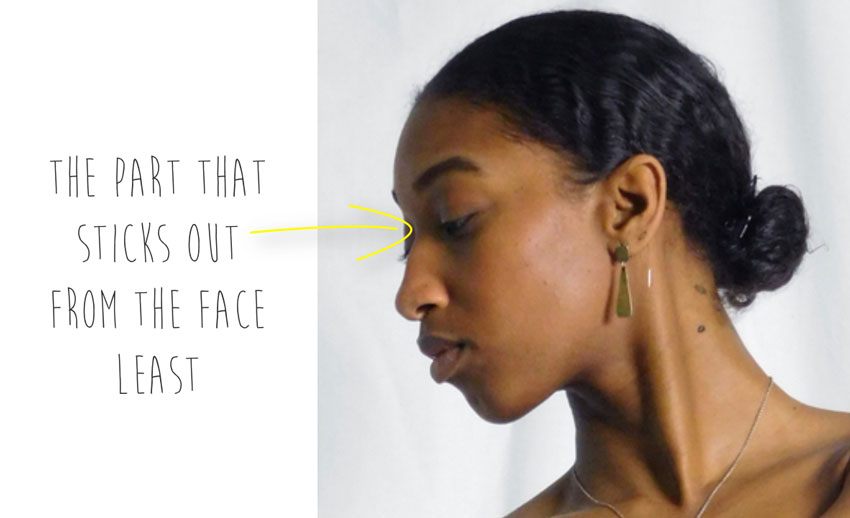 We are going to check how that point aligns with the line of the eyes. That point of the nose is important – it’s common to start the nose too far down on the face and the whole nose ends up too low and that means there is a big gap between the eyes and bottom of the nose, so the cheeks become long. 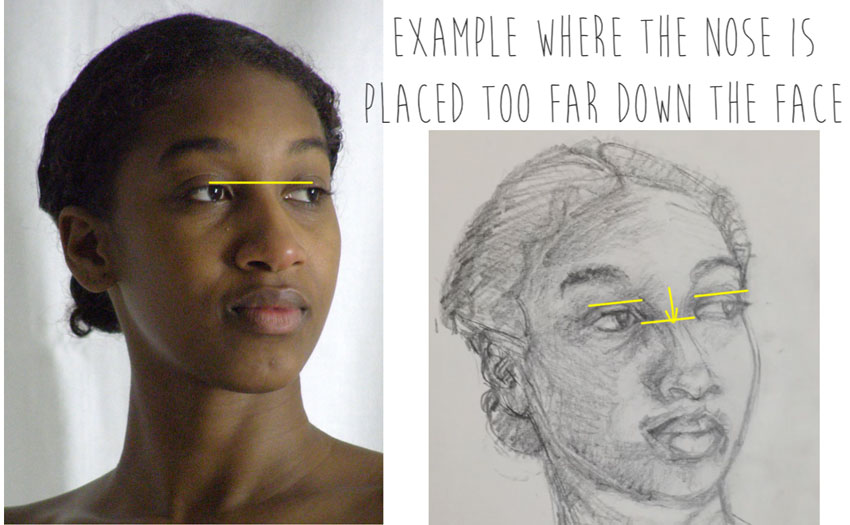 Take care to measure the angle of the line between the eyes. 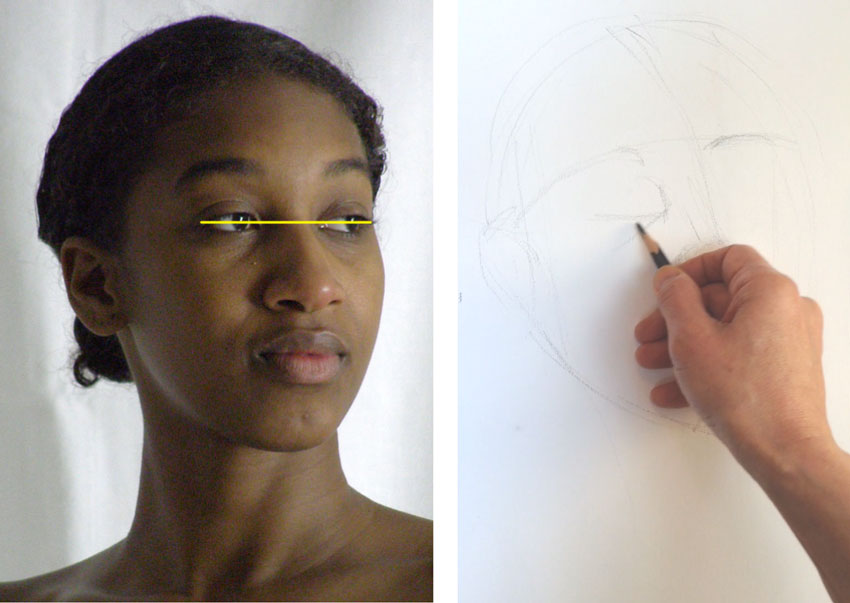 We are going to start with quite a large shape encompassing the whole eye socket. We are going to add in the shapes of the tones created by the eye socket. So we are putting down some context for the eye as a foundation. We want to check the distance between the centre line down the middle of the face to the inner edge of each eye. 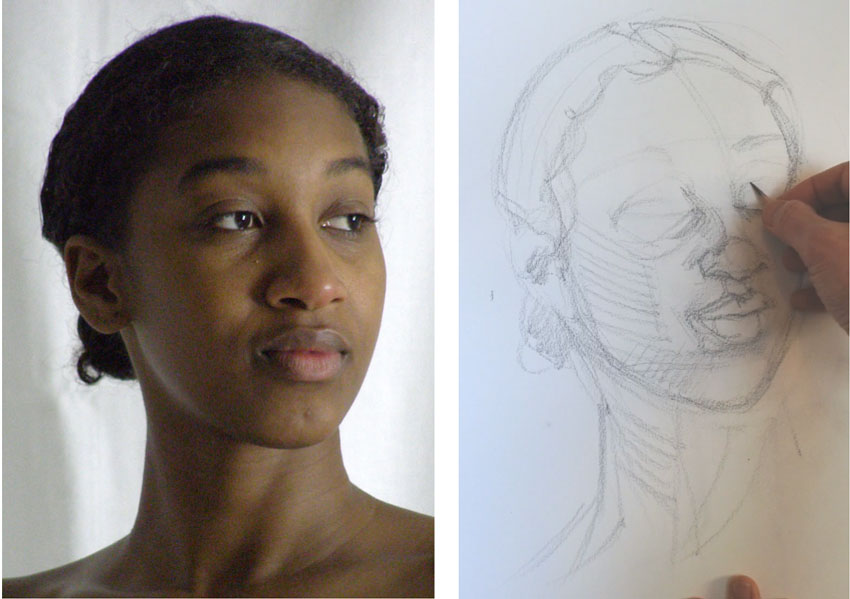 It can be useful from these angles, as with the side view, to see the eyelid and eyelashes as a French policeman’s hat – again looking at things in terms of other shapes.

As always, use alignment and negative space as often as possible. They are especially helpful for an angled view.

We are still being careful with the nasolabial lines, and still using lines to show the form in some places and being gentler, using changes in tone, in other places.

Thanks for reading! Try out our newsletter for more life drawing tips straight to your inbox every few weeks. If you haven’t already, do take a look at our Fresh Eyes Challenge, which is a FREE ten-day drawing challenge designed to transform the way you view the figure. You can check out the first tutorial in the Fresh Eyes challenge HERE