I asked my wife and my friend Dan to draw this face and then try the same thing with a very simple abstraction method. Neither of them draw much and they’re especially nervous about drawing people and faces, so they really did me a favour doing this. I think the results are pretty dramatically different.

Lucy, my wife, doesn’t draw much at all, but when she does draw something I often think it looks good and she has untapped talent. Anyway, she told me that she ‘can’t draw faces’. It’s a pretty common thing to feel, maybe you feel something similar. This her drawing the face without any guidance. The drawing came out quite nice but it’s a little flat, the lines are quite tentative, the shading is so light you can barely see it, and the proportions are a bit off.

Faces hold so much meaning, and our eyes register so much information from them, it’s easy to get overwhelmed when drawing them. So it can be very powerful to just bypass all of that and not try to draw the face at all. So next I asked Lucy to draw the face with this method.

Step 1: Ignore the face
I know it sounds crazy, but forget the eyes and the nose and mouth and all that, truly and completely. Just forget that it’s a face and see it a different way. We talked about a few ways to do that in our foreshortening series – we talked about seeing geometric shapes, seeing negative space, seeing it as a landscape. Now for this exercise, we are going to simplify the light and dark we see into abstract shapes.

Step 2: See the light and dark as abstract shapes
Look at the lightest parts of the face, the areas where the light is reflecting for example – they have a sort of shape to them like this. It’s the same with the dark areas. Below are the lines I see for the borders between light and dark in this photo, but for you, the lines may fall differently. It doesn’t matter too much. I asked Lucy to draw lines along any border between a relatively light area and a relatively dark area that she saw, straight onto a printout of the photo. 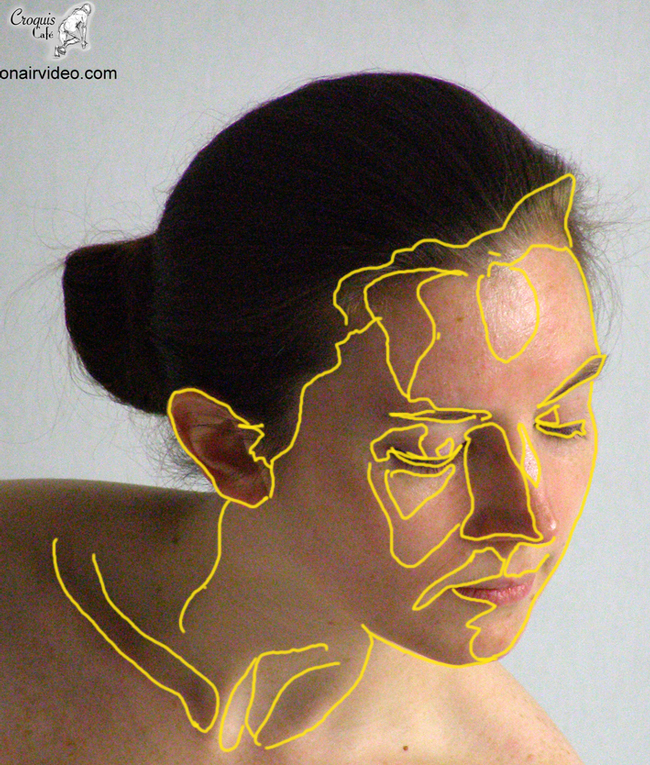 Lucy was concerned that she wouldn’t be able to separate the shapes according to the same degree of light and dark in different parts of the face, that it might be inconsistent. I told her it didn’t matter – there was no need to get too scientific about it. If she could sense some sort of border in the light and dark, put a line there – just keep the process very simple.

Step 3: Draw the abstract shapes
Then I asked her to draw the pattern of lines she’d drawn on the face on another piece of paper, trying to ignore the face itself. Drawing a seemingly random pattern of lines is not easy. You need to look at where the lines line up with each other and try to recreate their lengths and their twists and turns.

The idea is that while doing this, she isn’t worrying about ‘how to draw eyes’ and getting a likeness and how it’s so difficult to draw a face. She’s not thinking ‘I can’t draw faces’. She’s just drawing an abstract pattern of lines.

Towards the end, once the big shapes were in place, I said she could allow herself the see the facial features and to draw in what she needed to make it into a face. So maybe an extra line to explain the edge of the nose, to insert the eyes and so on. She added some shading within her shapes, just really filling them in. 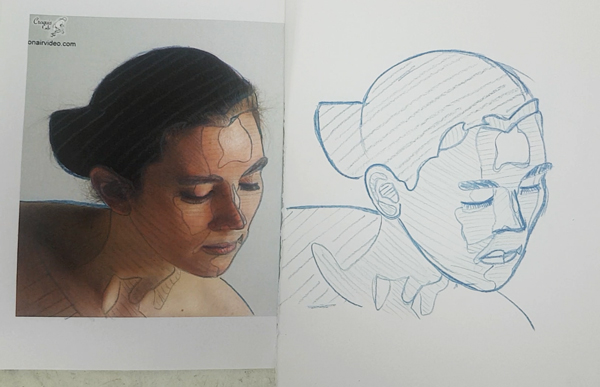 I see massive improvement. The line quality is totally different. Less tentative, less nervous. Watch her technique in the first drawing. She’s worried about the line, so she’s hedging her bets and doing a hundred lines in the hopes that some of them will look right. In this version, where she’s less nervous about the line because it just feels like a random pattern, she does one, bold line. 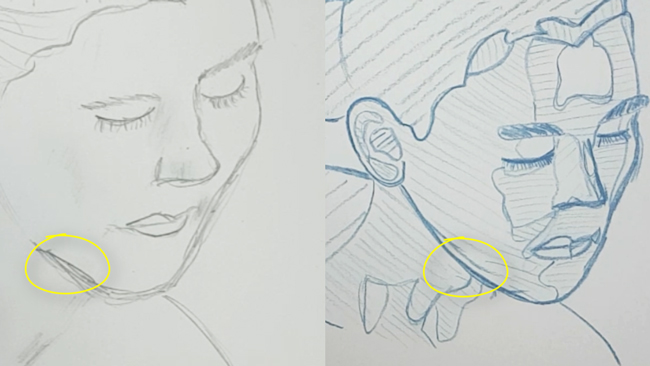 Drawing a jawline is intimidating. Drawing some random pattern is not. The abstracted drawing has volume, it is more natural and more like the original.

The shading is much more powerful. Filling in shapes is a lot less nerve-wracking than getting the subtle tones of the cheeks correct. And this was not because she got better at drawing eyes, noses and mouths, but because she stopped trying to draw those things. Dan was the same, with very soft, almost invisible shading becoming bold and strong shading giving volume and depth.

This is why we always talk about mindset. It’s not just wishy washy stuff that’s less important than hard technique. Your mind, and the confidence or anxiety you feel, is dramatically impacting every technique you use – the line quality, the proportions, the tones, the movement, everything.

Examples of using this skill in life drawing

Lets have a look at a Mayko and Lane Brown’s drawing. Look at the clear and distinct shapes of light and dark. These are not special anatomical shapes that they’ve memorised. These are unique to those poses and lighting, and they can draw them because they’re simplifying what they sees into big shapes and then trusting their eyes enough to draw those shapes they’re seeing. 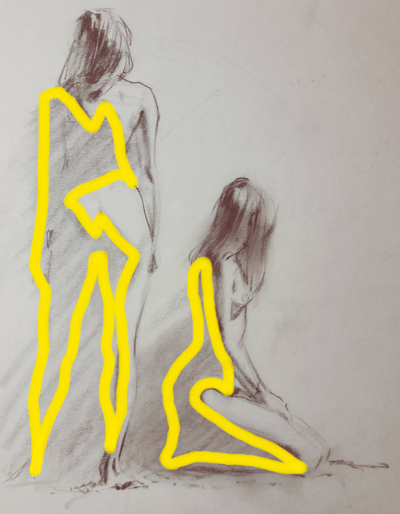 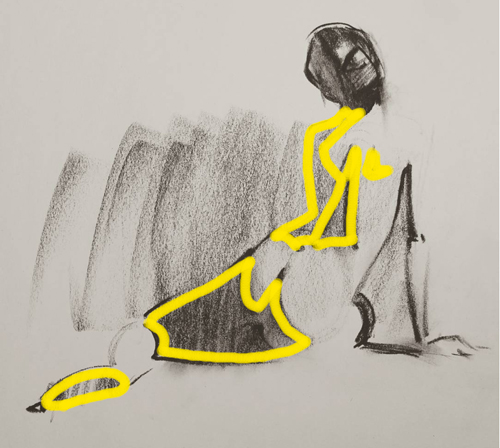 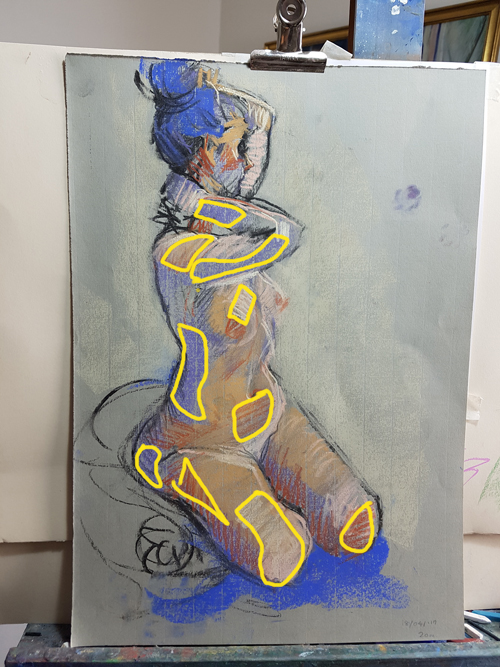 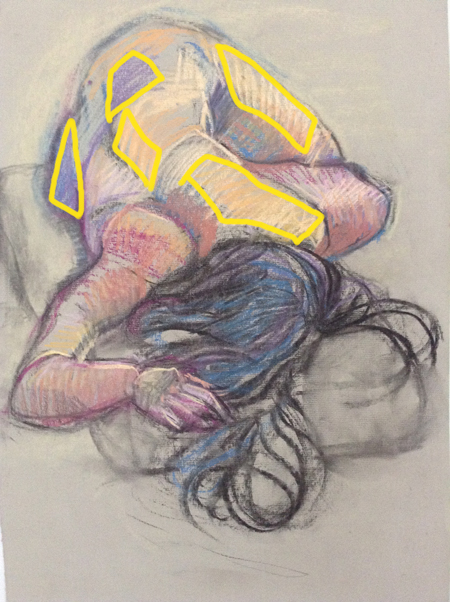 I also asked my friend Dan, who is even less confident with drawing than Lucy, to do the exercise and see what happened. He considers himself to be terrible at drawing, and doesn’t draw at all. Dan said his drawing would definitely be a disaster, and probably just be an oval with scribbles in it.

The first thing that happened was that his normal drawing was much better than he thought it would be, and more fun too. Then he did the abstraction exercise. He did a really good job, but one thing I noticed watching the video was that drawing the pattern of seemingly random lines can be tricky especially when a line goes off on its own. These lines don’t have much context around them, so it’s hard to gauge how far they should go. 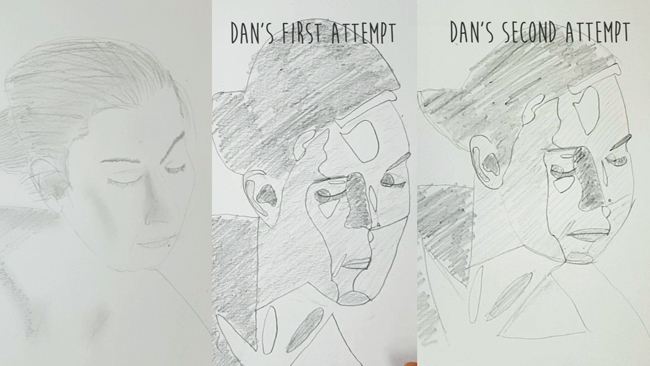 One other thing that can often happen is that you establish a line like the one running down the side of the face, and then you feel everything else you put down should conform to that line. So if that line is too long, everything gets stretched out to fit into it. I told Dan that if he put down a line that later looked wrong as he added more, he didn’t need to make everything stretch to fit that first line. Change that line as the drawing is built up. Dan had another go, which turned out like this.

This is an exercise

Now this is an exercise. In life drawing, you won’t be drawing straight onto a photo. But if you can see these shapes enough that you can draw them onto the photo, and then you can capture those shapes on the paper, eventually you’ll be able to remove that step of drawing onto the photo and just draw them as part of your drawing process.

This isn’t the only skill you need – there’s also the gesture and the structure and so on, but I think it’s really useful to find exercises that help you to isolate individual skills, rather than trying to tackle all of them at once.

I would love to know if you try this exercise and how you feel about it. If you can’t print out photos, just grab a newspaper and find a large photo in there to draw onto. If you haven’t seen our contour line exercise for foreshortening, where you just draw those lines and not the arm, check that video/article out after this one.