You know you need to capture the movement, the gesture, and not worry about details – but how can you build that skill? This video/article is about powerful exercises to do just that, and we’ll throw in some extra quick tips.

Exercises to simplify and loosen up

So from the first video in this series, we know we need to get rid of caution and doubt, and bring boldness and that sense of movement to the front of our minds. We know we need to learn to simplify and to edit things down. That’s what these exercises help us do.

If these negative ways of thinking do come up though, don’t beat yourself up. It’s hard to force yourself to change how you’re thinking.

But what I think is possible is to identify those negative ways of thinking when they come up, to accept that they are there, but to try to let them float away and instead bring forward a bolder side of ourselves. Here are some exercises to help push us to do that. They are great for beginners, but even advanced artists benefit from these exercises.

So in our first exercise, which we were testing out in our last Drawalong Club, we are going to make more decisions on simplification.

We are going to put down a first layer, for 3 minutes, fairly lightly and with a relatively light material or colour. This layer will be about simplicity and movement. We have 3 minutes, so there is no need to rush at all. We aren’t trying to fit in as much as we can in 3 minutes, we are trying to make good observations, choose our lines and then put them down with decisiveness.

We will concern ourselves a little bit with alignments – checking that certain points line up with each so they are roughly in the right place. So in this layer, we are not letting in doubt or caution or preconceptions, but accuracy and details are having a small influence.

Great, now we add layer 2, with a darker colour or stronger material. This time, we have one minute. We are going to go even simpler, we are going to get rid of these guys altogether.

Avoid the desire to just correct what you did before. We are going for more simplicity, fewer lines, more boldness, and we still aren’t rushing.

It can be useful, before worrying about drawing and lines, to just for a moment, imagine doing that pose. This is something Mayko often tells me to do, and I always forget because I’m worried about the drawing more than the pose itself.

Now we are going to force ourselves to let go of control. Worrying about the outcome is a big problem. Worried lines make the viewer worried too.

We also want to make sure we are observing the figure, not just obsessing about the drawing itself. In other words, we want to base our drawings in the figure and not in our own heads.

So what can we do get into this mentality? We are going to not look at the drawing at all only the figure. So our drawing is probably going to look ridiculous, which is perfect. We want to draw with movement – decisive and bold.

Now, this demo is by Mayko and actually turned out like a nice drawing, but don’t expect or aim for that. Just to make things clear, here’s another blind drawing:

Often I struggle even when doing this to let go of control. I give in, and glimpse at the page, or trying to keep track of where the line is with my finger. That’s all nonsense and not the point of the exercise.

With this exercise, we are going to observe the figure for a full minute. Then we have 30 seconds to draw what we saw.

A short time frame doesn’t mean we need to rush or make more marks. We only need a few marks, and they’ll take seconds to put down. So there’s absolutely time to observe the figure and make considered marks.

So with this exercise we are going to learn to observe properly first. Most of us also don’t have photographic memories, so when we do the drawing in this exercise, we can only hold the most important and essential information in our heads.

Quick tip 2 – Soft in the middle

So in the last video we looked at some useful starting points, and how you can look at the relationship between the shoulders, the spine or torso centre line, and pelvis. In our beginner course, the next step was to think about the solid, rigid masses of the ribcage and pelvis. Now again, we don’t need to draw the ribcage or the pelvis, but it is useful to see and capture there being two solid masses, with rigidity, with a soft bit in the middle, that can squash and stretch.

Look for the transitions between the rigid and soft. There aren’t any rules to how the curves and transitions will be in the rigid structures versus the soft, flexible part, so you’ll need to look at each model and pose.

This one is a little like the two layers exercise, except that we are going to reduce that crutch a little bit more. Instead of drawing on top of our initial drawing, we are going to do it to the side. And we are going to simplify twice. That final one better be simple as hell guys. 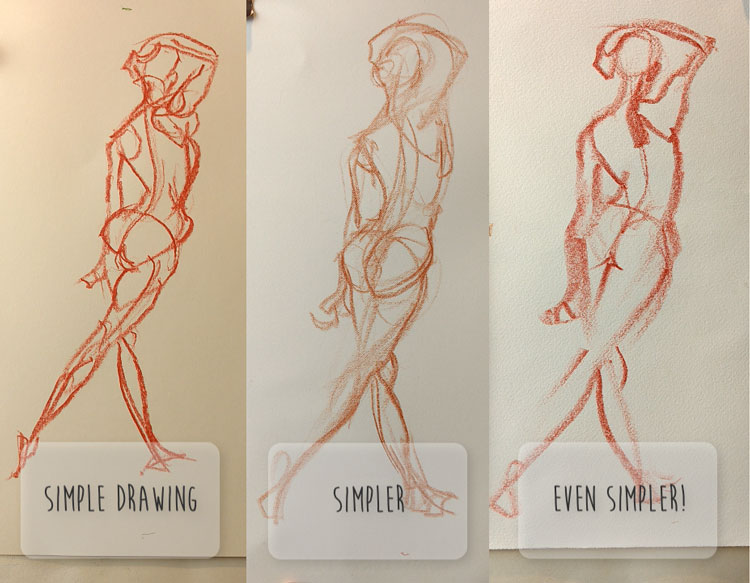 In the next part of this series, we are going to look at how to bring movement into our longer drawings – this stuff isn’t just for short drawings – and we’ll add some more useful things to look for in the pose.

How to find the perfect drawing tool for you