We are going to learn how to draw the area on the front of the torso between the ribcage and pelvis. There’s the abdominal muscles, fibrous structures and fat and other components, but also there’s the gesture connecting the ribcage and pelvis to think about. We’ll look at how to draw all of this – the lines and shading to use and the characteristics to look out for. We’ll also look at differences between people with different physiques.

This article contains the transcript of the video above but not all the visuals, so I recommend watching the video to see the ideas demonstrated.

So let’s go through the general structure of things.

One of the most important things about the structure of this area is not the muscles themselves but the skeletal structure around the muscles, especially the ribcage arch and the pelvis. One of the most common mistakes we see is to elongate the torso by expanding the gap between these two big shapes. Try bending to one side and feel how close the bottom rib can get to the top of pelvis. I was an elongator for years, guys, don’t be an elongator. If you can get this gap right and the overall angles of these two structures, it’ll be much easier to get down the abs successfully. 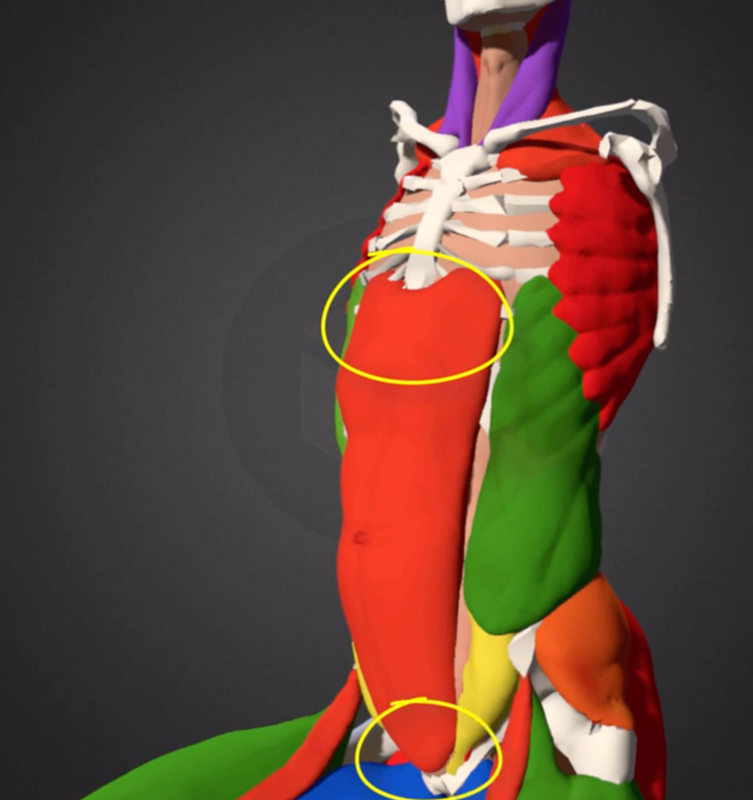 The grid like appearance of the abs here is the most celebrated, so it’s often prioritised in our drawings over more important things. We know it so well it’s even got a nickname – the 6 pack.

We tend to see and draw what our brains already recognise and we often ignore or just get confused by areas we haven’t thought much about. There are other characteristics of mid-section that are more important, so let’s look at those first.

Look out for how they squash and stretch. Often what really matters is the lines across the ribcage arch and pelvis and then the lines down the abdominal muscles. There’s the centre line that runs down the middle of the rectus abdominis, which fades away below the bellybutton but you can imagine it curving down to the crotch. Then there’s the two sides of it, which tapers off to the crotch too.

Another prominent & visible muscle is the external obliques, which are basically on the sides. 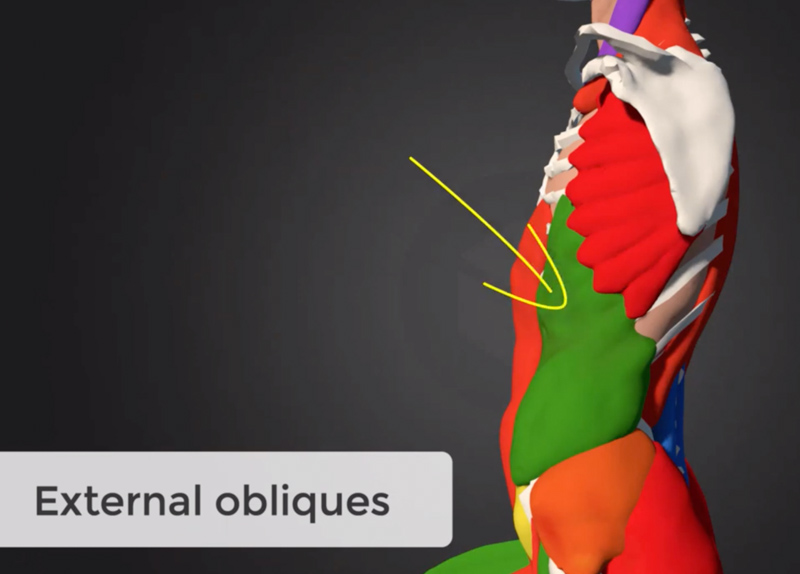 The top part of them comes down diagonally from the ribs to the rectus abdominis. Usually they’ll be very subtle, but on really muscly people you might see they make this pattern like interlocking fingers with other muscles. But the thing to remember for now is just this general diagonal movement from these ribs to that central section of muscle, the rectus abdominis.

The lower parts of the external obliques are called the flank portion. They attach to the lower ribs and go the top of the pelvis on a slight diagonal, and they bulge out a little bit pushing outwards from the bony bit of pelvis. They wrap a little way around to the back too. 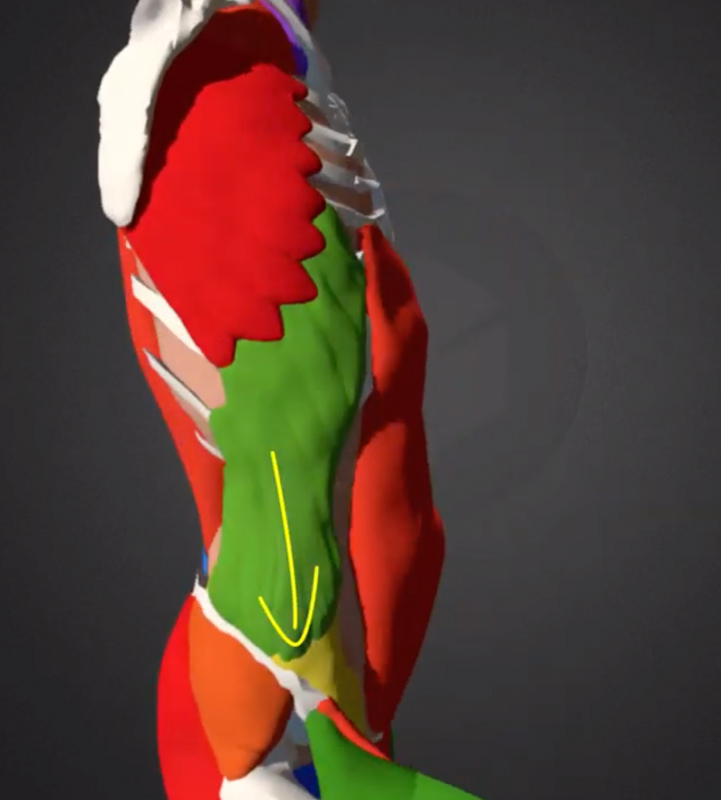 These bits of muscle are not talked about much, but they are important, especially because they are part of the silhouette of the figure. People talk about the fat deposits here, calling them love handles, but not the muscle so we really often see these little bulges ignored.

Since things bulge out here and come in from the ribs diagonally here, the point where things are narrowest is above the flanks. When a pose is bent over, don’t underestimate these sharp angles and how much the outline comes inwards before pushing outwards again. Getting those angles is often essential to the gesture. I’ve noticed that sometimes on females there’s just a sharp angle when the torso is bent like this, and on males there’s two, but it’s best to observe the figure you’re drawing rather than rely on preconceptions like that.

The rectus abdominis has tendons running across it which created those distinctive indentations. They are often smoothed over by fat, but they are visible on lean people. The one across the top is arch shaped. The rectus abdominis overlaps the ribcage arch, so on a muscly person that is tensing their abs you might see this more curvy arch of muscle instead of the pointy arch of the bony ribcage. The indentation running across near the bellybutton is fairly horizontal.

It’s good to get into the habit of seeing these in terms of light and dark – shadow shapes rather than that grid we like to see. How to shade this area is quite tricky and subtle so we’ll talk about that later.

The indentations going across the abs are often useful to show the subtle roundness and volume of the tummy, just like any line that runs around a volume.

I think it’s often useful to think about a hierarchy of shapes. For example, in a figure drawing, big and simple should be prioritised over small and detailed. So here’s a useful order to see things in:

All the time, feel the movement or gesture that runs through these lines.

We need lines and shading that emphasise the big, important things and are more subtle with details. Otherwise that grid can dominate the drawing.

If the whole area is in light or is in dark, keep the contrast low for the details. The indentations are often noticeable but not necessarily really deep. You can instead emphasise broader shadow shapes that explain big volumes and distinguish between big areas of light and dark. These little feature details are secondary. Some bits are a little lighter, but in general they are all in the light range. Or here, some bits are darker than others, but in general, it’s all in the dark area. If the abs are in light and you want to bring more volume to them without getting too harsh in the shading, consider white pastel to add volume.

If the light is falling in a way where there are strong form shadows around each part of the abs, you can have stronger contrast, but use it to bring out the bigger shape, and just indicate that grid like shape. You can merge shadow shapes around the sides of the abs or around the bigger shape of abs. Give some indications of the indentations in those shapes, rather than trying to define each square, and merge shadows as much as possible.

6 pack abs are very rare. Usually some or all of the indentations are smoothed over. Generally though you can see the bigger shapes. Even when someone has more fat tissue covering the abs, you can still see the centre line, some diagonal movement down from the ribs and where they meet that central column of the rectus abdominis.

Fat will deposit differently on different people, but often there will be more around those flanks on the sides, people often call that fat love handles, and in a rounded shape just below the bellybutton.

Female people will often have a narrower ribcage and wider pelvis which means a different shape abs to males. Sometimes the rectus abdominis can take on a violin shape.

That’s just a rough generalisation though.

Other things to remember

Generally the abs in profile push forward beyond the pelvis bony bits, even on slim people. This area in profile varies a lot depending on whether the person is sucking in their stomach, or tensing, or even breathing in or out. Generally even on a slim person there is some outward curve below the belly button.

Keep in mind that since we are big bags of water, our outlines tend to bulge outwards in convex curves. So at the waist, things come inwards overall, but the curves going in and then coming out again are still convex.

As always, reading a tutorial like this is just the start. The skills need practice to take hold, and that practice is likely to start off confusing and frustrating, it’s always like that. But persevere, and all becomes clear! There’s more articles here, check on out and see you next time.