It’s so easy to make the figure feel flat like it’s not three-dimensional. Why is that? Because the drawing surface is flat! The drawing is two-dimensional and so every time we’re trying to create a drawing that has depth to it, that has a third dimension, it’s always a magic trick, an illusion. The surface you’re drawing on is 2D and you have to create the illusion of that third dimension. And so just like a good magician, you’ve got to sell that illusion.

When it comes to learning to draw, our brains can really mess things up. The brain likes to flatten everything, because it doesn’t like foreshortened human body parts. For example, it wants an arm to look like a flat shape. It doesn’t like the idea of an arm receding in space and changing into a different kind of shape. 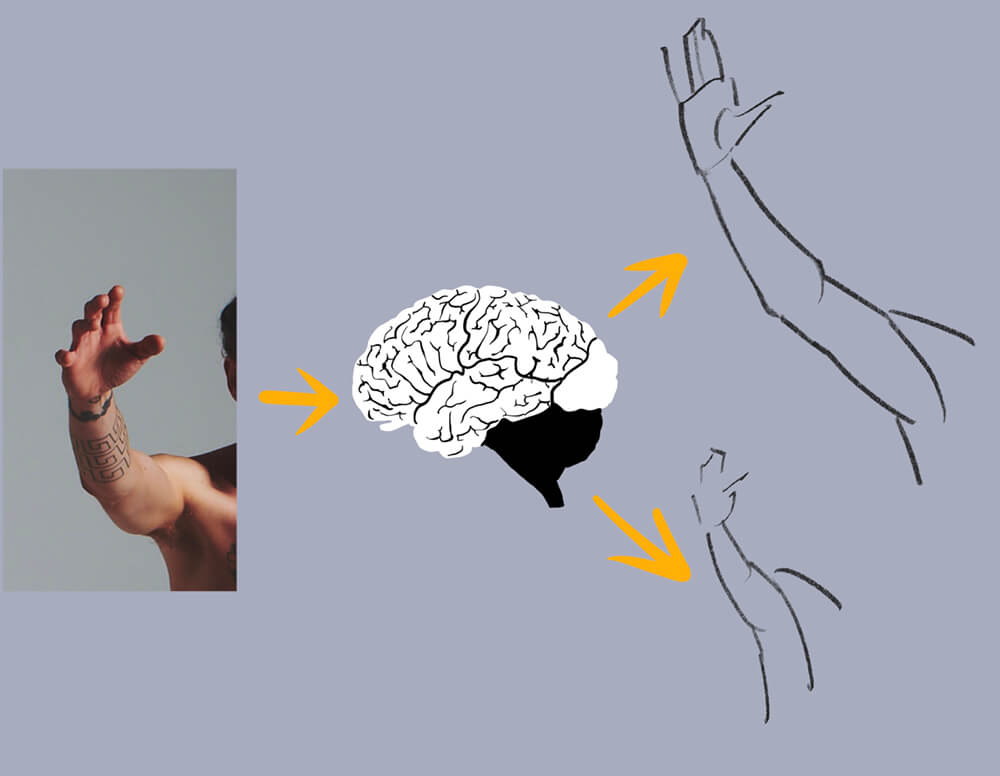 Our brains distort things in so many ways and you may not realise it. I can see it in a lot of beginner drawings. But the cool thing is that our brains are not so resistant when it comes to simpler forms like boxes and cylinders. And these simpler forms are a really clear easy way to create that illusion of depth on the 2D surface. The box is just three planes that clearly show the 3 dimensions, and the cylinder is also an easy simple way to create that sense of depth. 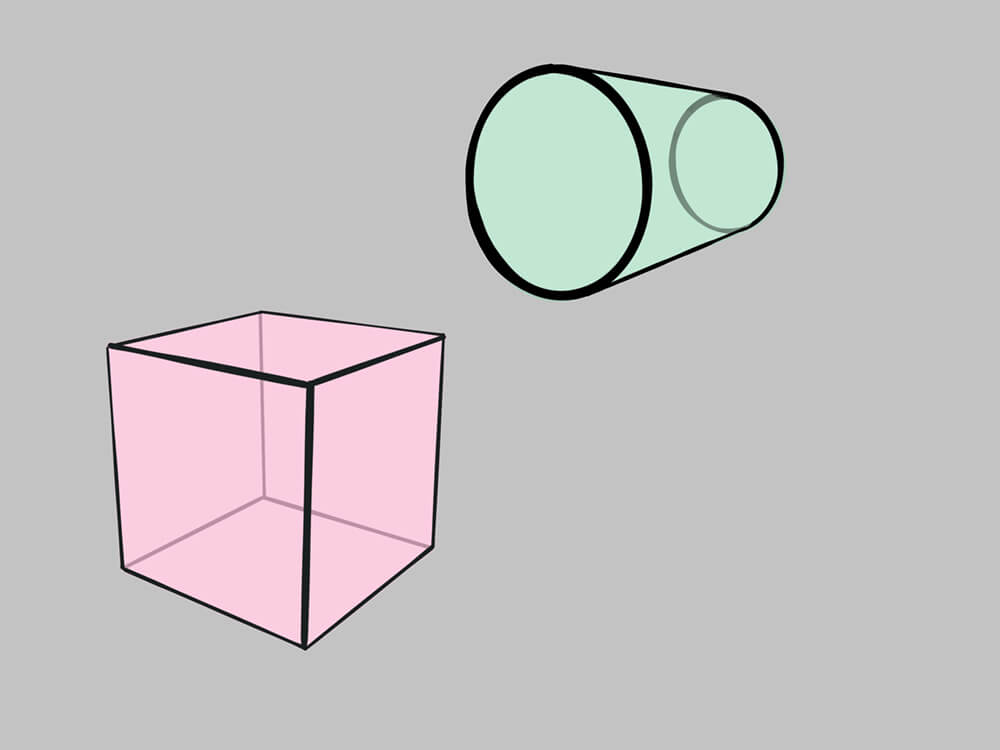 So the challenge is to draw the figure in terms of these simple forms. This isn’t as easy as it looks. There are various approaches out there, and here is my personal take on it: I don’t force anything into a form, a simple box or a simple cylinder when it just doesn’t really look like that at all. I only do it when it seems to naturally be that way. For example,  the wrist really is naturally a very boxy form, it has clear simple planes to it. That makes a lot of sense. The upper arm is very often a basically cylindrical form and upper forearm too, so it really works. But some parts of the figure don’t lend themselves to being represented by primitive forms like boxes and cylinders – the shoulders are a prime example. I just try and simplify it but keep the form roughly as it is. 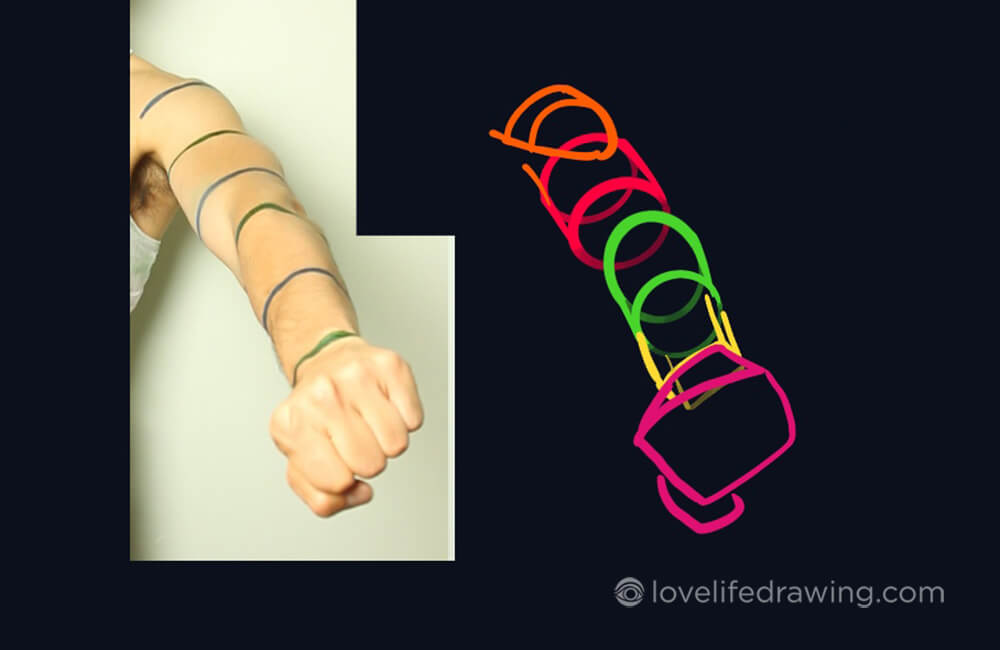 If you really want to get to grips with simple forms you can see in the figure and how to find them, check out our Fresh eyes challenge. I recommend doing the whole challenge if you haven’t already.

As I mentioned earlier, foreshortening is an illusion and you’re the magician. You’re selling the trick. So all the marks in your drawing need to go with this illusion. Let’s look at an example. In the image below, my marks on the box below don’t really go with the form. 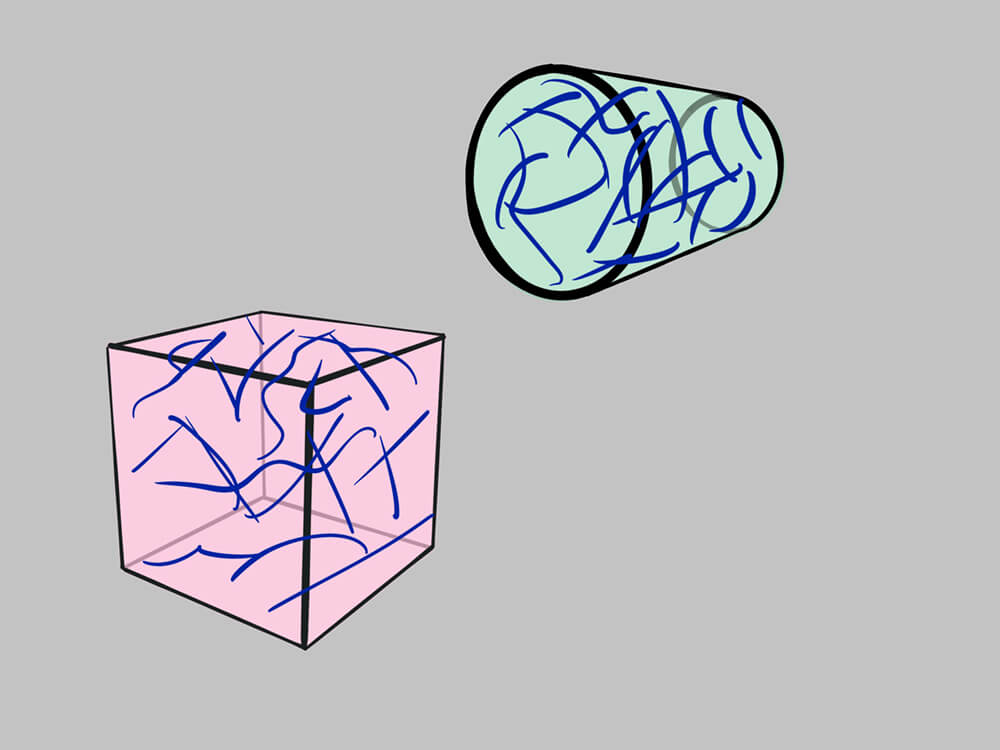 Can you see how, in the image above, the box starts to get flattened out by those marks?

However, if I make sure that all my marks are going with those ideas, those three simple planes of the box and the curve around the cylinder, they really help to sell the illusion. If I have a shadow cast across the cylinder, it needs to be wrapping around that cylinder. If I have some writing on it or something, I want to show it wrapping. Everything is going to sell that illusion of the simple form. 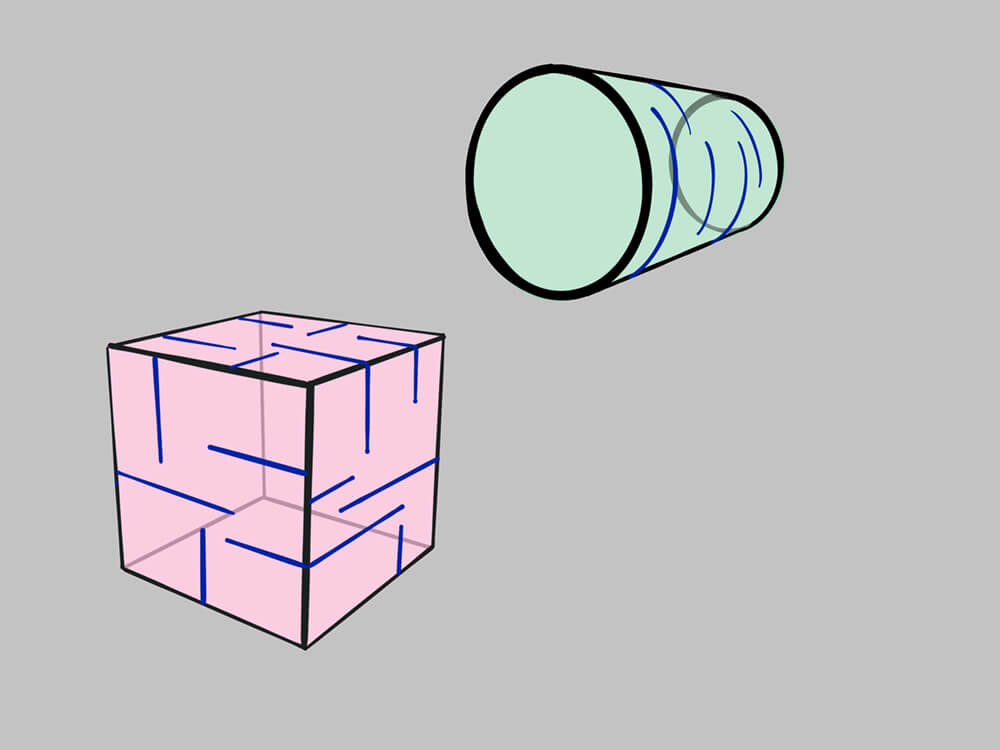 It’s the same principal in figure drawing. In the example below, I’ve got two drawings of a hand using the same outline, but different marks within. Can you see the difference? 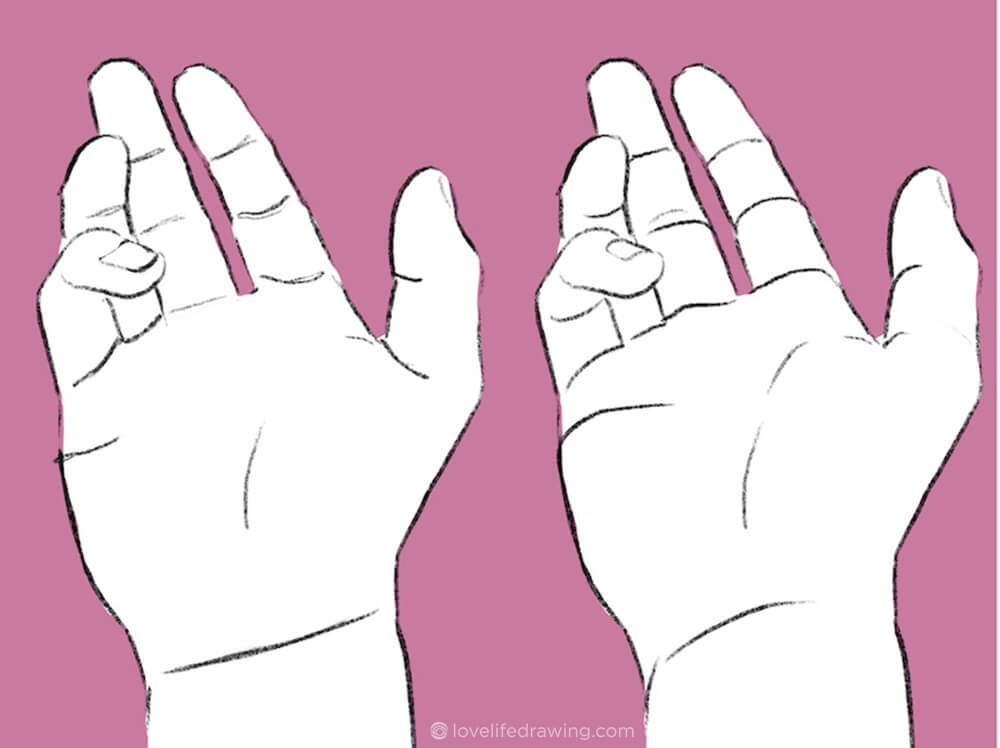 To sell the illusion, the nails need to wrap around the form of the fingers, the wrinkles at the knuckles need to wrap around that form. If you were painting these hands, why not use brushstrokes that wrap around that form. When you have a shadow, see if you can get that edge of that shadow to show that form as well, show the simple planes. If it’s a boxy plane, sell the simple form idea in your shading, in your mark making, in everything. Every time we’re doing this, it’s a magic trick. You can read more about how to use cross contour lines here.

Overlaps are simple, relatively easy to use and incredibly powerful. They are also underrated in my opinion. All I mean by overlaps is showing one form is behind another one. It creates depth, because when you see one thing is behind another, you naturally think of depth. With this principal in mind, having forms that overlap each other is a really good way for us to help sell that illusion of depth. 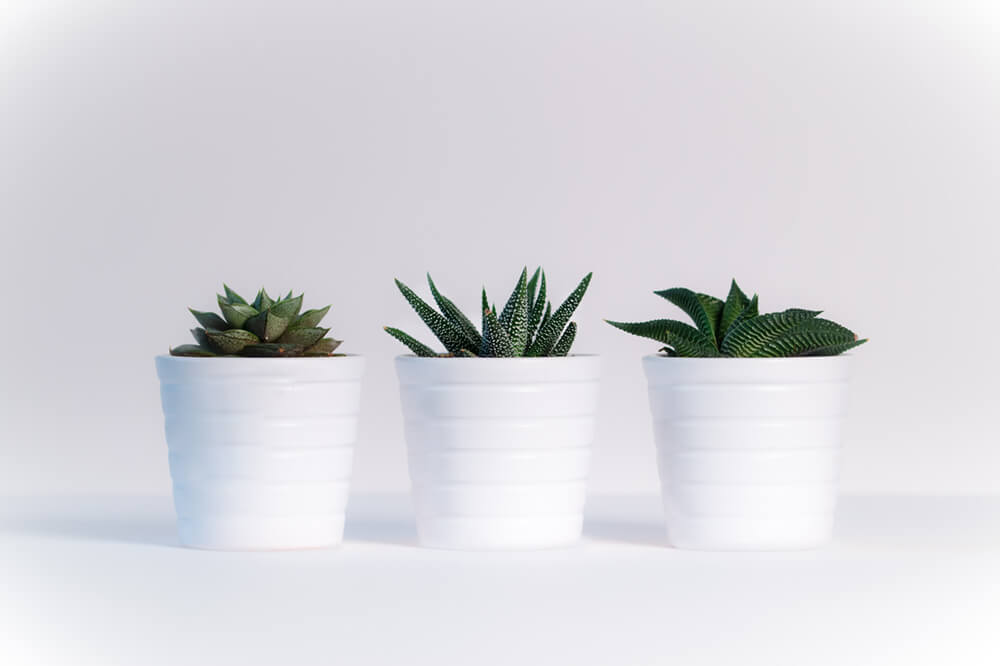 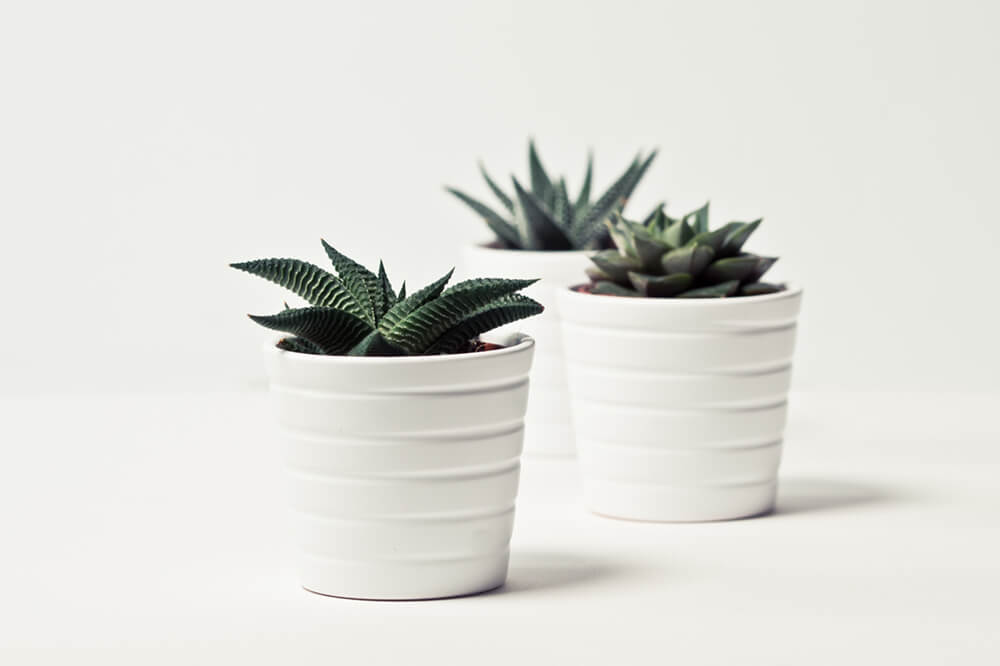 When you’re setting up a still life to draw, don’t have all the objects all separated as in the first image above, have them overlapping each other as in the second image. It’s good for the composition, it’s good for big simple shapes of value and stuff like that, but it’s also good for creating depth and dimension.

When you’re drawing a figure, you’ve got to think about the overlaps in the forms, especially when things are foreshortened. That is going to help you to create depth just by visualizing that and bringing those ideas out. Watch out for your brain trying to seperate out the forms (like on my drawing below on the right). 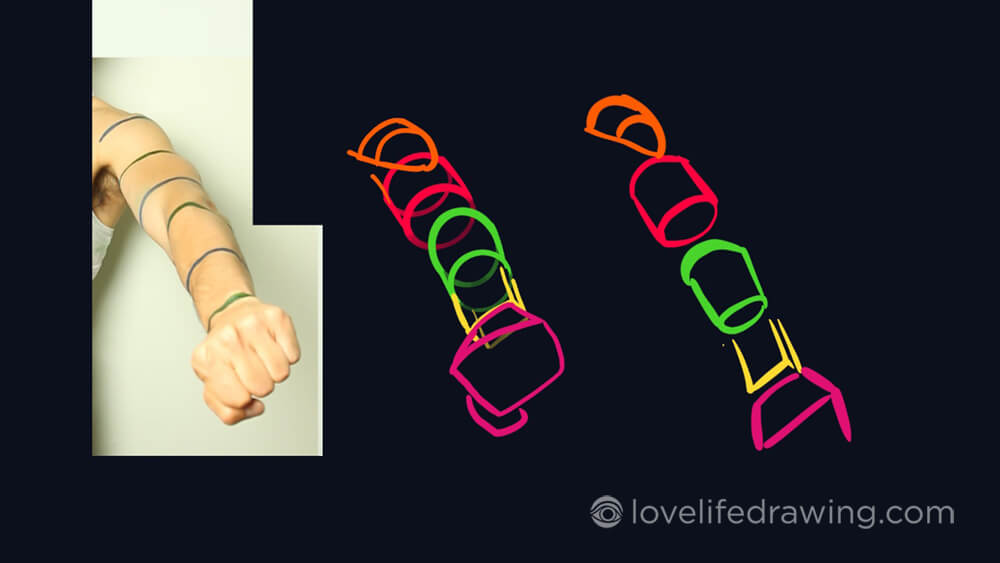 The diagram of the arm on the left has the forms overlapping so it works well. The version on the right has the forms separated so that they don’t overlap. This stretched out and flattens the arm. Overlaps are great but many artists separate forms without realising.

So, the principles of perspective are going to apply to all our drawings and that’s going to help give them depth and make them feel real. But the normal way that we study perspective as in the diagram below (vanishing points, lines nicely converging) isn’t going to apply that much when drawing the organic forms of the figure. It works great in a street scene or in a room, but most of the lines and edges and things we’re dealing with on these simple forms in the figure are not parallel, and so they’re generally not going to converge nicely to vanishing points. 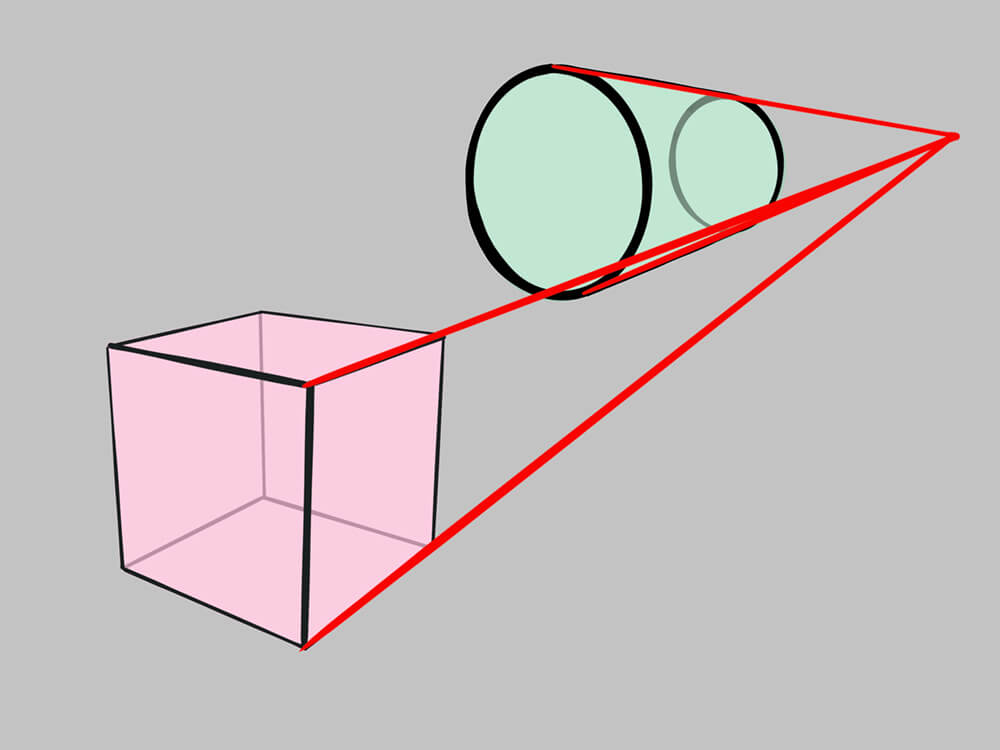 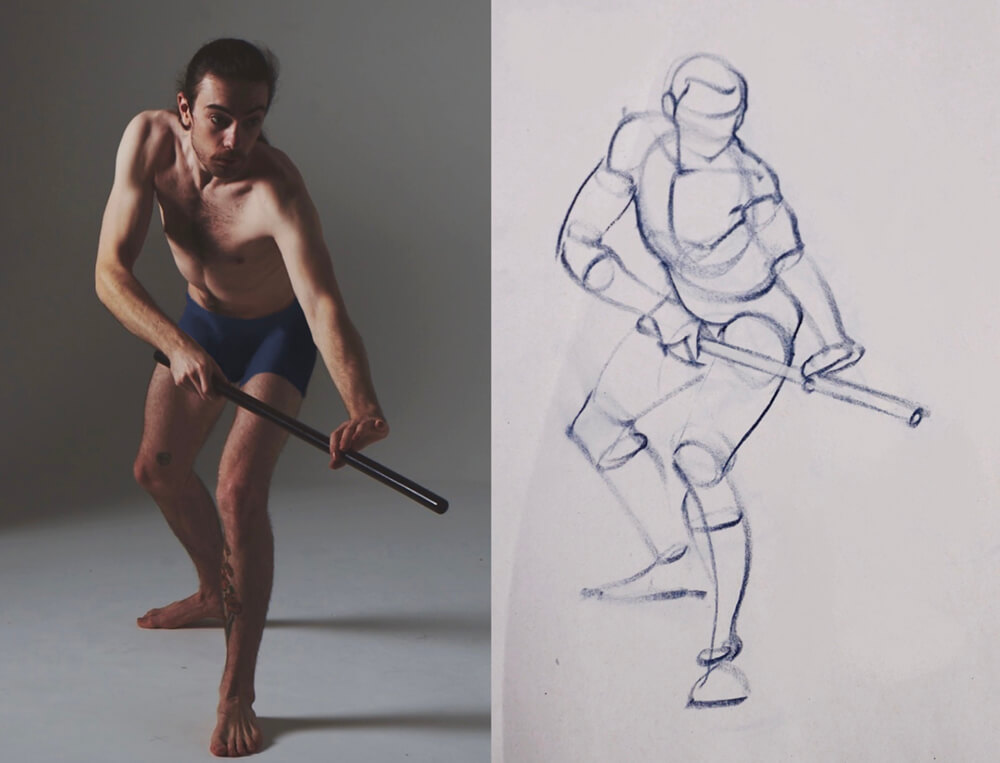 If we think of the arm,  it’s wider at the shoulder and narrower at the wrist. So overall it tapers down. If the arm is going away from us in space, because of perspective, the wrist is going to be even smaller because it’s further away and that overall tapering is going to be even stronger.  It’s as simple as that. Objects further away appear smaller that they normally would – closer objects appear bigger than they normally would.

You can use measurements to help figure out how much smaller or bigger to make things. You could also try exaggerating this on your drawings. You could make further away parts extra small and you can make stuff that’s close a extra big to really sell the illusion.

How it all fits together

In case it feels like we are adding yet another skill you have to practise, let’s remember that ultimately, a lot of figure drawing comes down to three fundamental skills:

Really when we’re studying anatomy, it’s a more broken up version of learning the very simple forms we are talking about in this article. So it all comes back to these 3 fundamental skill areas.

When you’re doing a drawing, how do you use the ideas in this article? There’s two ways that I would go about this.

The second way to use these ideas is not as an exercise, but during your actual figure drawings, where you are trying to create the best figure drawings you can. During those drawings, you’ll pull in all the tools you have. You might not draw the whole figure in terms of simple forms, but you’ll bring in simple forms for areas where it will benefit you most.

If you enjoyed this article and would like to dig deeper into simple forms, I’d highly recommend signing up to the Fresh Eyes challenge. It’s free, and you can read more about it here. 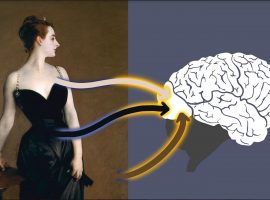