Ok so we know the aims of the drawings. But when the 60 seconds start, what lines should you actually draw? You may have heard you should just focus on the gesture. But I remember finding that sort of advice confusing – how do you do that in practice, especially when you’re still just figuring out what gesture is? I think doing this exercise might help.

A month or two ago, we did the 12 line challenge as one of our Draw Along videos. We set the rules as follows – you can put down 12 curves – either C, S or J shaped curves, like these. You could deepen the curves or make them straighter. The C could be curled over so much that it becomes an oval. But you can’t add extra little bumps and angle changes to the lines. 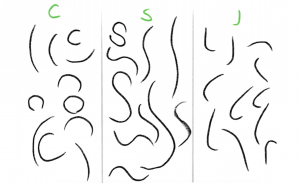 So on this pose, you can’t capture everything by outlining each part individually – that would be too many lines. You need to see lines that flow through different parts of the body. You also need to get rid of any extra little bumps and details in the lines, because the curves you’re using won’t allow that. 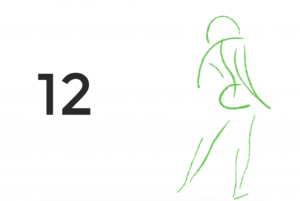 The ability to see these flowing lines, and letting them flow uninterrupted in the drawing, is a useful skill for gesture drawing. Only being allowed to do 12 lines will probably mean you slow down. You have 5 seconds to do each line, so that means a lot of observation time and it means having time and space to draw each one.

I sent this exercise to some of our subscribers to try out themselves and here are their efforts. The 12 lines you choose reflect what you consider important, so it was interesting to see what they each chose to prioritise.

They did a great job, and told me it was both fun and illuminating to be pushed towards so much simplicity. One thing I fed back to most of them was since your lines are limited, choose to capture the interesting characteristics, and leave out the things the viewer can guess. Sometimes if you indicated one side of the leg, you don’t need to draw out the other side.

Here Brenda is giving two lines for the breasts – she could probably get away with one curve that cuts across the volume of both.

but to make the figure feel cohesive, also look for some of the lines cutting across the figure.

Here Danny had chosen a lot of the up and down outlines, and in his second attempt had started to include more lines cutting across.

So, if you’d like to try the 12 line exercise today guys, go for it! And even if not, try taking some of the principles we’ve discussed into the session with you. Good luck with your practice, and I’ll see you here tomorrow.